Farmers Know Climate Change is Real. Will the Feds Help Them Adapt?

While dismal farm economics—and shrinking conservation funds—make it hard to find the funds, a growing number of farmers are ready to make critical changes. 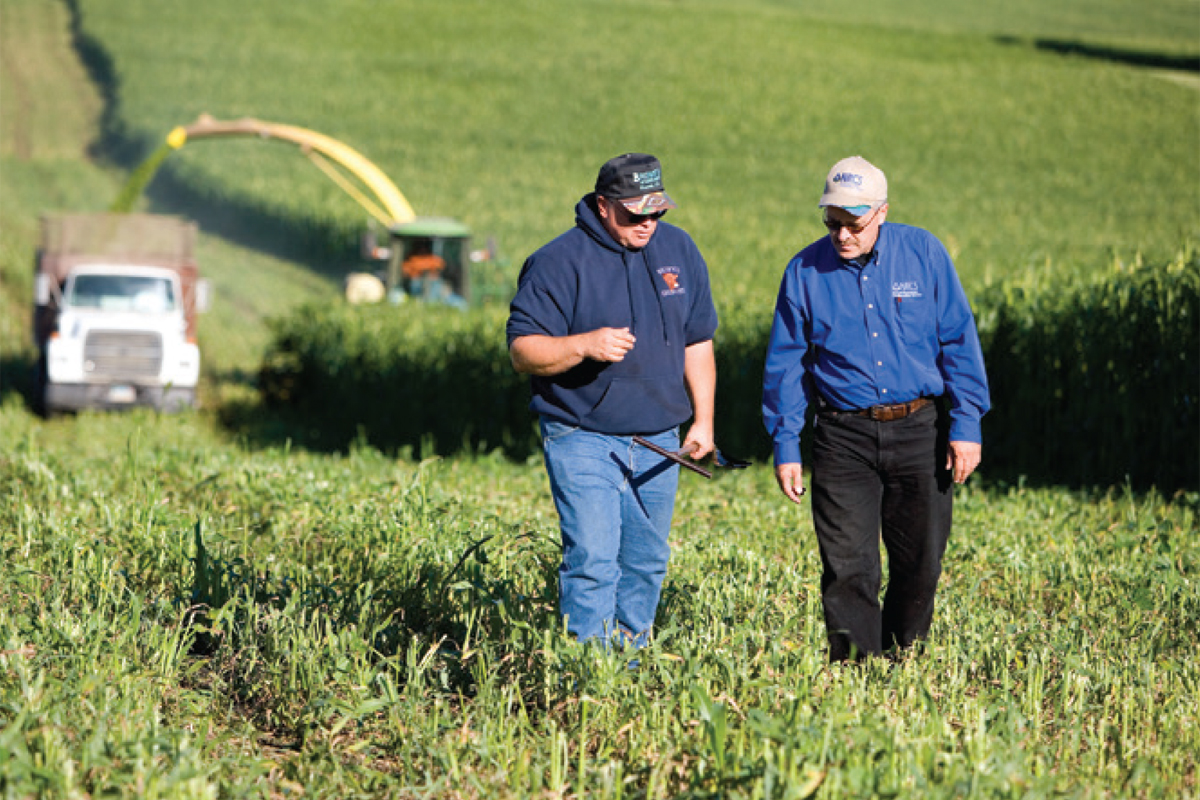 Instead, he lived it.

The fourth-generation farmer in south-central Wisconsin has been through four 100-year floods in the past eight years. This year was the worst ever, with 20 inches of rain in 10 days. Two dams broke, flooding the small farming community nearby with eight feet of water. Corn and hay fields were wiped out; cattle were killed. “Farmers around here are generally of Scandinavian descent,” he says. “We don’t ask for help, but I’ve never seen anything like this before.”

Devastating floods may be extreme, but they are not the only changes underway. When he first took over the family dairy farm almost 22 years ago, Dunnum transitioned the operation to organic beef production. He and his neighbors planted their crops after Memorial Day and harvested them in November. Now they plant around the middle of May and harvest in December.

Two decades ago, Dunnum, like many farmers, scoffed at global warming. “I didn’t take [climate change] seriously,” he recalls. Now, he says “Everybody buys into the fact that things have changed, we’re just not sure what we can do about it.”

The fourth U.S. National Climate Assessment, released in late November, adds new details to the steady drumbeat of reports with the same overarching message—climate change will increase rates of crop failure, decrease crop yields and livestock productivity, and make many crops more vulnerable to pests, weeds, and disease. Rural communities, dependent on agricultural, are particularly exposed to climate volatility. In other words, business will not continue as usual.

Farmers will have to adapt one way or another to protect their farming operations from extreme events—at the same time, federal funding for conservation in the new farm bill hasn’t been restored to the level it was at in 2014, meaning that farmers will have limited resources with which to make changes. 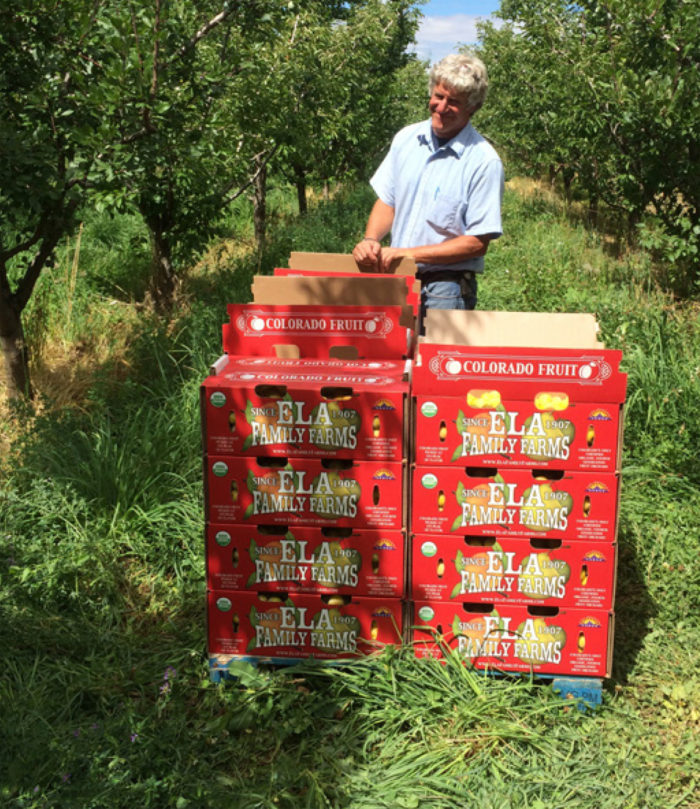 Steve Ela grows a diversity of fruit varieties on his Colorado farm and direct markets them, two strategies that improve the resilience of his operation and help him maintain profitability. (Photo by Laura Lengnick)

In the Midwest, where farms are highly dependent on rain-fed crops such as corn and soy, the changing climate is especially risky. And it’s making many common farming practices less practical, says Dennis Todey, director of the U.S. Department of Agriculture’s Midwest Climate Hub in Ames, Iowa. For example, farmers always used to apply nitrogen in the fall, he says, but it doesn’t stay on the fields through the winter anymore. Few farmers are adapting proactive strategies that could help them thrive in the future. And talk of how to mitigate climate change by, for example, managing soils to store more carbon, isn’t taking place often enough, says Todey.

If anything, climate predictions continue to get increasingly dire as well as regionally specific. “The latest reports make it clear that we’re not going to ‘genetically engineer’ our way out of this,” says Tom Driscoll, director of the National Farmers Union’s Foundation and Conservation Policy, based in Washington, D.C. But, he adds, “I don’t think reports like this get to the farm level.”

Even if they do reach farmers, a good number of them simply don’t feel the need to engage on a topic they consider deeply technical and contentious, and which hasn’t so far resulted in major policy changes. “All successful farmers adjust for weather extremes and always have,” says Will Rodger, spokesman for the American Farm Bureau Federation. “Our members—we are a grassroots organization—have shown little stomach to weigh in on most climate policy, given the day-to-day demands of their vocation,” he says.

While there’s no shortage of daunting data at the national and global level, an Institute for Trade and Agricultural Policy (IATP) report found that only 18 states have developed climate action plans that include agriculture. The missing link is specific, practical advice able to improve bottom lines and protect fields.

Without that, risk-averse farmers simply don’t do things like reduce tillage or plant cover crops, although both can reduce erosion and build soil carbon and health. There are a number of reasons—from the currently dismal farm economics to land ownership to neglected conservation programs—why any conversation about climate change is still mostly talk, and little action.

Amid low soybean, corn, and milk prices, many farmers aren’t in a financial position to fundamentally change their operations. Dunnum is president of the farmers union in Vernon county, one of the poorest counties in Wisconsin. Even organic farmers there were put on a quota system because of an overproduction of milk that has led to low prices. “Farmers around here have been beat down to nothing, then the flood comes through,” he says. In August alone, Wisconsin lost 47 dairies. 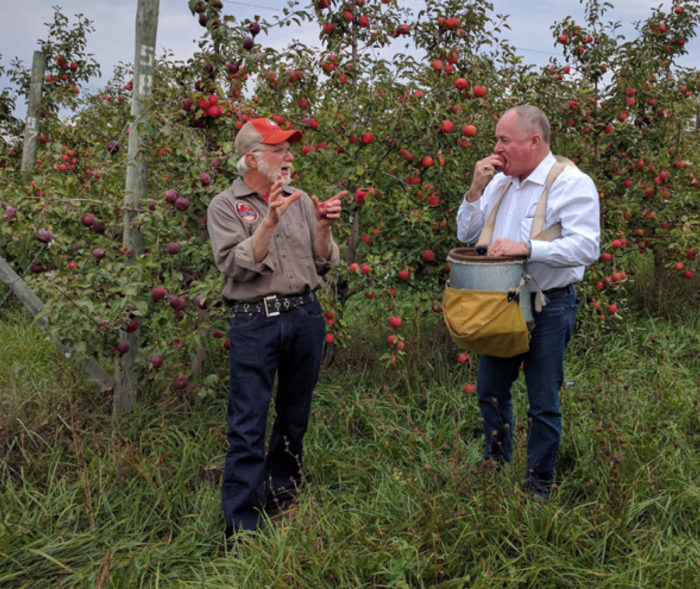 “We have to place climate change within the larger economic pressures that most farmers are facing, and it’s pretty dire,” says Ben Lilliston, director of rural strategies and climate change at IATP. For the last five years, prices have been below the cost of production. Climate change adds another layer of stress, he adds.

For farmers just trying to stay in business, the challenges of adapting to climate change can prove overwhelming. Todey likens the added burden to managing a retirement account; figuring out how to do better is a lot more work for an uncertain economic payoff.

Pure economics is not the sole reason farmers hesitate to adopt new practices, says Schmitz. For one, many farmers rent their land rather than own it, and they have less incentive to improve soil that they don’t own. In addition, adding something like cover crops or adopting no-till farming changes every aspect of farm management—and increases risk, at least in the short term. “It’s not an easy transition,” he says.

“You don’t want to be the first person to do cover crops in your area. It can go very wrong and disrupt a farmer’s business,” says Driscoll. Similarly, no-till is a very popular practice, one that builds a fair amount of carbon, but it can make it difficult to manage weeds without tilling. “If you [don’t want to use] glyphosate, it’s hard to do no-till,” adds Driscoll. Finding seed for cover crops and proper support to adopt the practice can also be challenging.

Seeing this vacuum, a few organizations are putting together tools for farmers looking to manage climate risks on their land. Purdue University’s Climate Change Research Center produced the Indiana Climate Change Impacts Assessment, a series of reports on how climate change would impact, among other things, Indiana’s water, energy, and agriculture. Maps indicate, by county, how soil is projected to warm to 50°F about a month earlier by mid-century, or how a decrease in chilling hours, the time that trees and other perennial plants require 35-50°F weather to fruit properly, will effect many crops. Another graph shows how corn yields have decreased 3.1 bushels for every degree the average nighttime temperature in July increases.

“Each farmer has their own mix of economic and environmental considerations, and their own equation for what makes sense,” says Jeffrey Dukes, director of the Climate Change Research Center.

Cornell University’s Climate Smart Farming website has four separate interactive tools for upstate New York farms, which are largely dairy operations and orchards, including a growing degree calculator, a up-to-date drought atlas and a winter cover crop planting scheduler. The latter tool was developed to help farmers determine the optimal time to plant a cover crop in the fall, so that they get the most growth possible (i.e., put enough roots in the ground to stem erosion), says Michael Hoffmann, executive director of the Cornell Institute for Climate Smart Solutions. The site’s most popular feature, however, is called climate change in your county, which generates maps and charts to show how the climate has changed since 1950 and what it is projected to look like in the future.

Providing more data and tools to help farmers is a crucial first step, but data alone can’t always help farmers choose the most economically viable practice. “When we get information from the National Resource Conservation Service, it’s just data,” Dunnum says. It becomes real when a farmer tries a specific practice, and can say it saved money or increased yields, he adds. 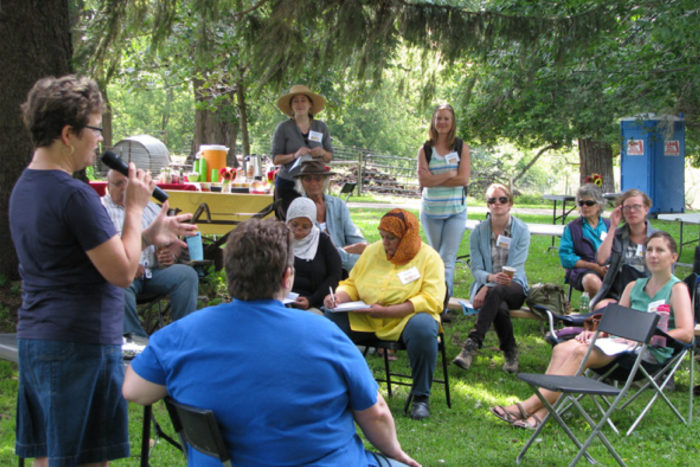 Networking with fellow farmers and ranchers is a powerful way to improve
the success of your operation. Here, Lisa Kivirist (far left) of the the Midwest Organic and Sustainable Education Service speaks with women farmers about cover crops as part of a SARE-funded workshop series. (Photo by Jean Andreasen, North Central SARE)

Hoffmann adds that developing a strategic plan is equally important. For example, he says, university researchers can provide information on things like which specialty crops might be viable in a given location as temperatures rise, when farmers will need to irrigate their crops as droughts increase, and which cover crops to use. “Those of us at land grant institutions, who have the luxury of not having to focus on staying in business day after day, need to develop road maps [for climate adaptation] throughout the country,” he says.

A strategic plan could set the stage for not just adapting to climate change—but also empowering farmers to take the next step of mitigating agriculture’s carbon emissions, which contributed almost 9 percent of the U.S. total emissions in 2016. Driscoll says the 200,000 farmers in his network would be excited to build their soil health if they were adequately compensated for it.

In fact, NFU members’ voted to support a price on carbon in their annual mission statement. “We want to get paid to fix the climate and sell our commodities,” says Driscoll. While the Farm Bureau hasn’t polled their members, Rodger believes many of them would join efforts to sequester carbon as long as they paid for themselves. “Our members respond well to market forces—even those established by the government.” But, he adds, “right now, the farm economy is anything but robust.”

Instead, however, the new farm bill sets up future cuts in funding for farmer incentives to adopt conservation practices—such as EQIP and the Conservation Stewardship Program—two programs that already have waiting lists, explains IATP’s Lilliston. “We’re doing the exact opposite of what we need to be doing. We should be expanding funding [for these programs], not fighting off cuts,” he says. “This is the price you pay for climate denial.”

When Dunnum transitioned his parents’ dairy farm to an organic beef operation, it was purely an economic decision. Yes, he wanted to bring back the practices that were commonplace during his father’s time—less tillage, rotating crops—but he also wanted to make a living, so he had to find a profitable niche. Organic was it, but only with the government incentives available to help him with get through the three-year transition. It was a good living for a while, until market consolidations took a toll. Now, “farmers are drowning in debt and forced to work off the farm,” says Dunnum. “We are up against a wall and no one is listening.”

Lilliston says that states are going to have to take the lead on finding solutions—in part because state budgets are going to be less able to handle big climate-related disasters. Some states already are. California has invested in efforts to protect farmland and reduce their greenhouse gas emissions, as part of its ambitious goal to generate zero carbon emissions by 2045. Colorado’s Carbon Fund aims to increase carbon stored in soils.

“We need to create pathways for action,” Lilliston says. “And we really need to pay attention to how to make this work economically; it’s going to be critical.”