Dollar Stores Are Taking Over the Grocery Business, and It's Bad News for Public Health and Local Economies | Civil Eats

Dollar Stores Are Taking Over the Grocery Business, and It’s Bad News for Public Health and Local Economies

A new report shows growth of dollar stores in low-income and rural communities furthers inequity and pushes out local businesses. 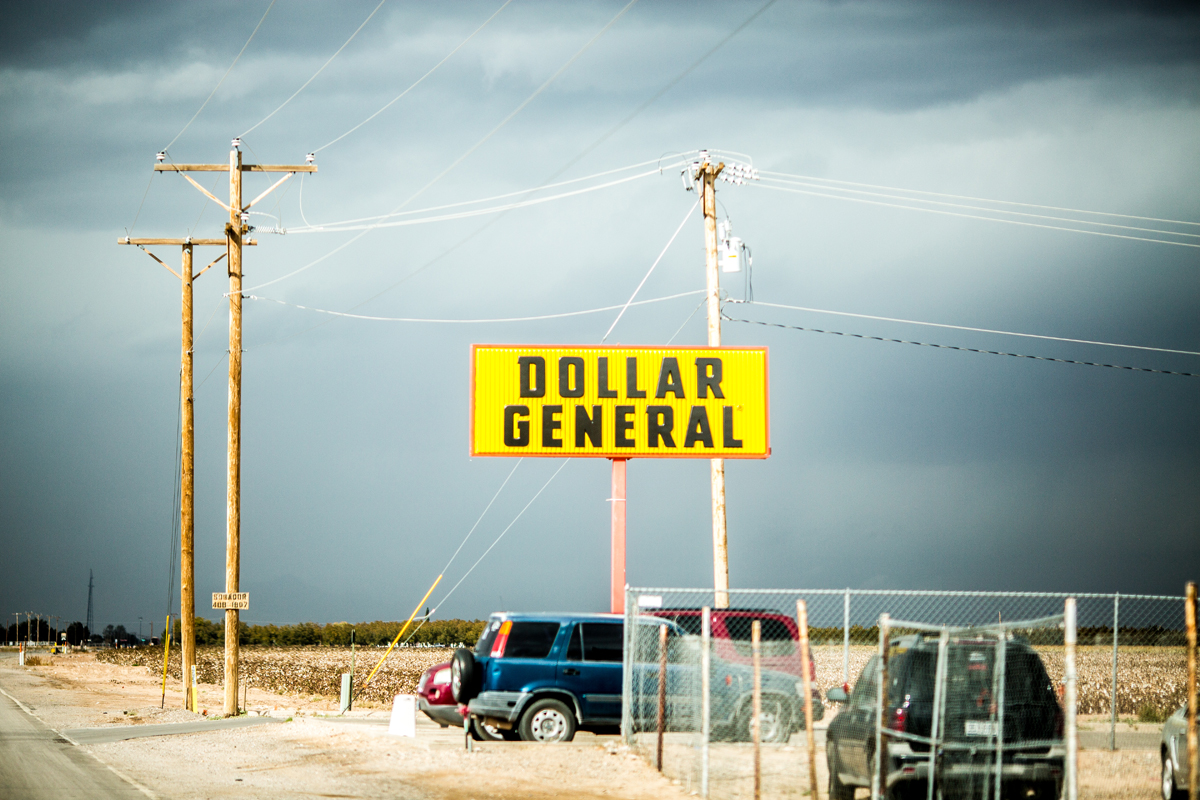 Today, there are more dollar stores in the United States than all Walmarts and Starbucks combined. These low-priced “small-box” retailers, like Dollar General, offer little to no fresh food—yet they feed more Americans than either Trader Joe’s or Whole Foods, and are gaining on the country’s largest food retailers.

Detailing the explosion of dollar stores in rural and low-income areas, the Institute for Local Self-Reliance (ILSR) recently released a report that shows how these retailers exacerbate economic and public health disparities. The report makes the case that dollar stores undercut small rural grocers and hurt struggling urban neighborhoods by staving off full-service markets.

ILSR also argues that the proliferation of dollar stores is the latest outgrowth of an increasingly concentrated grocery sector, where the top four chains—Walmart, Kroger, Ahold-Delhaize, and Albertsons—sell 44 percent of all groceries, and Walmart alone commands a quarter of the market. These dominant chain stores have decimated independent retailers and divested from rural and low-income areas, as well as communities of color. 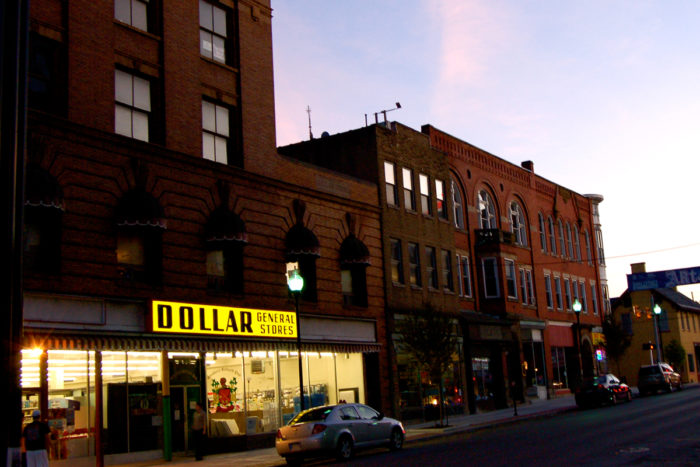 “Earlier trends in big box store [growth] are making this opening for dollar stores to enter,” says Marie Donahue, one of the report’s authors. “We’re seeing a widening gap of inequality that’s a result of wealth being extracted from communities and into corporate headquarters… Dollar stores are really concentrating in communities hit hardest by the consequences of economic concentration.”

“Before this report, I had no idea that dollar stores were proliferating in this way,” says Dr. Kristine Madsen, Faculty Director of the Berkeley Food Institute. But, she adds, “it doesn’t surprise me that these incredibly cheap stores may be the only choice for people [who] may be choosing between medicine and rent and food.”

Dollar General did not respond to a request to comment for this article.

Profiting Off Customers in “Food Deserts”

Most of these new stores are in urban and rural neighborhoods where residents don’t often have access to fresh fruits and vegetables. In 2015, in fact, Dollar Tree and Dollar General represented two-thirds of all new stores in “food deserts,” defined by the U.S. Department of Agriculture (USDA) as low-income areas where a third or more of residents live far from a full-service grocery store. Dollar General predominantly targets rural areas, though it s beginning to compete with Family Dollar, which is ubiquitous in urban food deserts.

Some, including dollar-store executives themselves, argue that a low-cost retailer seeking to go where no one else will benefits underserved communities. But ILSR argues that dollar stores are not a true solution to hunger or food insecurity. Furthermore, the group says, they do nothing to promote food sovereignty, or people’s right to control the production and distribution of their own food. 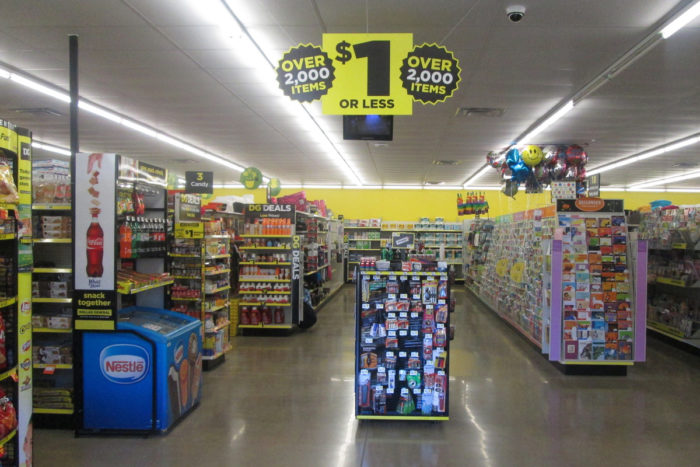 “To the extent that dollar stores are filling, in some ways, a need in communities, I think that is true in the short term,” says Donahue. “But really our research is demonstrating … those foods aren’t as good quality as full-service grocers or independent local stores, which may be able to connect to local farmers and the larger food system.”

Dollar stores sell predominantly shelf-stable and packaged foods. Four-hundred-and-fifty Dollar General locations are experimenting with an expanded refrigerator section to respond to a demand for more fresh fruits and vegetables. But, to date, the fresh and frozen offerings that do exist in these stores consist of processed meats, dairy products, and frozen meals. In other words, customers don’t have the same wide selection as they do in a traditional full-service grocery store.

“Grocery stores have more variety and a higher quantity of healthy foods than do dollar stores,” says Dr. David Procter, director of the Rural Grocery Initiative, a program of Kansas State University’s Center for Engagement and Community Development.

Despite their reputation, dollar stores don’t provide the best deals either. They often sell products in smaller quantities to keep a low price tag and draw in cash-strapped buyers. But when comparing per-ounce prices to a traditional grocery store, dollar store customers tend to pay more. Reporting by The Guardian found that the prorated cost of dollar store milk cartons comes to $8 per gallon, for example.

“There’s very little money made on all kinds of segments of the [independent] grocery store, but where [grocers] do make their most money … is in paper goods and dry goods,” explains Procter. “That is really the heart of Dollar General … and it’s cutting into the largest profit area of the grocery store, that’s the real challenge.”

By sucking away this source of revenue, dollar stores tend to drive out the few independent grocers that remain, especially in rural areas. ILSR’s report found that “it’s typical for sales [at local grocery stores] to drop by about 30 percent after a Dollar General opens.”

Additionally, a survey by the Rural Grocery Initiative found that competition from large chain stores is the single largest challenge facing independent rural grocers. In the ’90s, Walmart was their main challenger; now Dollar General is moving in where even Walmart wouldn’t go, pushing out more local businesses.

Residents lose more than fresh foods when their local grocery store disappears. They lose jobs, local investment, and a voice in their food choices.

According to federal data, small independent grocers employ nearly twice as many people per store when compared to dollar stores. “When you have a hometown grocer owned by people who are committed to that community, not only are all the decisions made locally, but all of the profits stay in that town,” says Procter. “Some of the money that’s being generated in Dollar General stores is going to their headquarters in Tennessee, and the decisions about whether or not that [store] stays open or what they offer is being made by out-of-state corporate decision makers.” 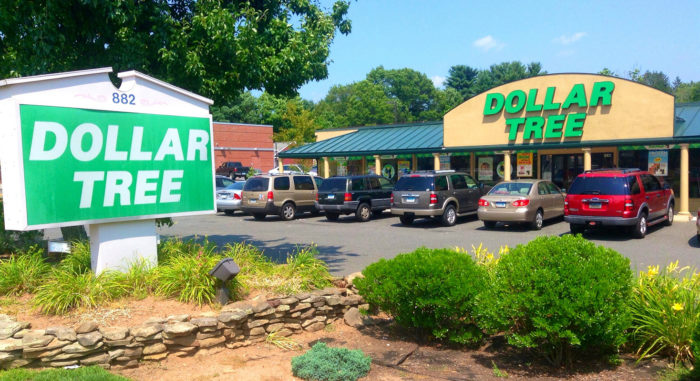 In addition to undercutting existing stores, the proliferation of dollar stores can shut out new entrants. This is a particular concern in low-income urban areas and communities of color. ILSR’s report features the case of Tulsa, Oklahoma, where there’s a 14-year life expectancy gap between residents in the predominantly Black north Tulsa neighborhood and residents in the predominantly white south Tulsa neighborhood. ILSR found that dollar stores have “concentrated in [Tulsa] census tracts with more African American residents,” and community members are not happy about it.

“I don’t think it’s an accident they proliferate in low socio-economic and African American communities,” Tulsa City Councilor Vanessa Hall-Harper told ILSR. “That proliferation makes it more difficult for the full-service, healthy stores to set up shop and operate successfully.”

However, Tulsa’s story also provides a glimpse of hope into what some communities can do to halt the invasion of dollar stores. Hall-Harper worked to pass zoning ordinances that would limit dollar store development and encourage full-service grocers to set up shop. She rallied residents to protest the opening of a new Dollar General and join city council meetings to show support for a temporary dollar store moratorium. City council passed the moratorium and the zoning changes seven months later. North Tulsa will soon have a new grocery store, operated by Honor Capital, a veteran-owned company that has a food-access mission. Rural communities in Kansas have similarly organized and leveraged city council to halt a proposed Dollar General.

“It’s great to see a community really fight for this ordinance and show up to public meetings and hearings and challenge those traditional systems that would have just approved development for more dollar stores in the area,” says Donahue.