The Palestinian Chefs Building a Bridge to Their Culture Through Food

Featured on the new season of KCET’s ‘Migrant Kitchen,’ Reem Assil and Lamees Dahbour are redefining their cuisine and culture, and serving up a message of peace. 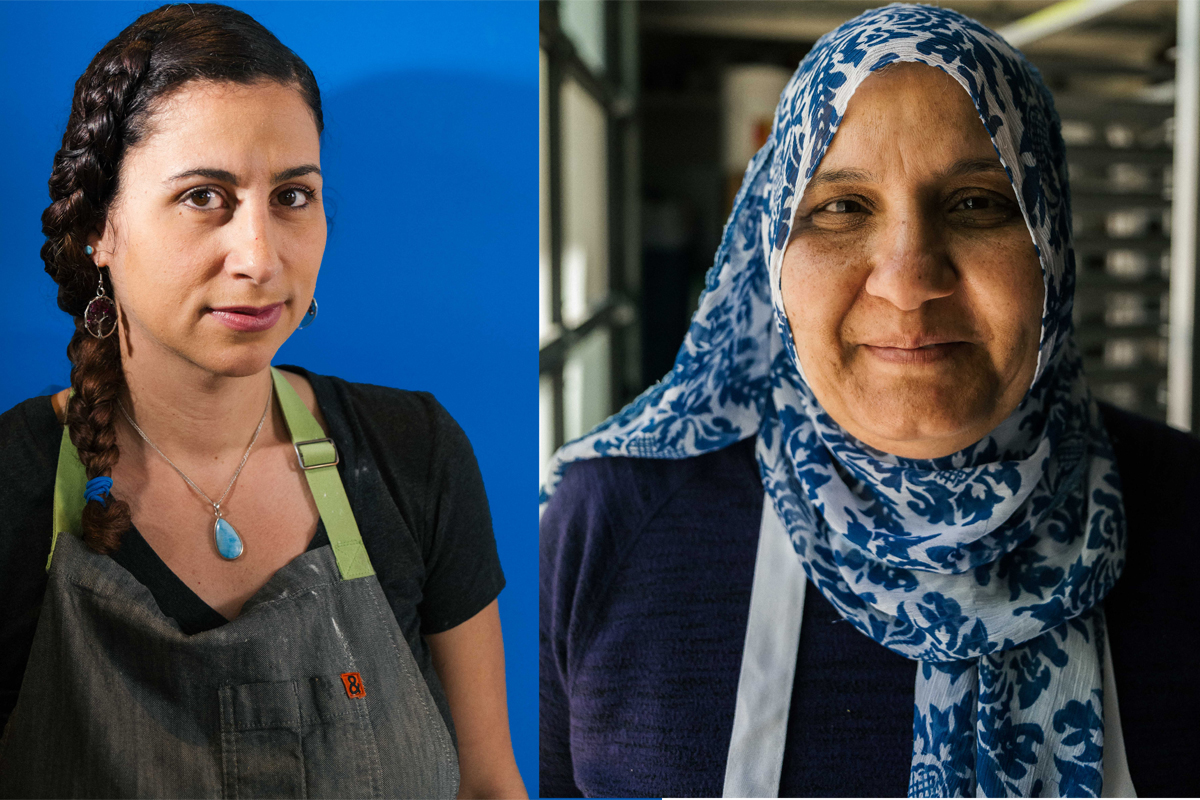 When Lamees Dahbour set up her weekly tent at Off The Grid, the San Francisco-based food truck fair, this year, she didn’t just unpack trays of fragrant falafel, crisp ejja (vegetable fritters), and creamy mutabal (eggplant dip). She also unfurled a red, black, white, and green Palestinian flag and displayed it proudly. The flag was a conversation-starter: Mama Lamees, as she is affectionately known, says that people often came up and asked about it, although some confused Palestine with Pakistan. It was also a way to proudly share her identity, at a time when many Americans know little about Palestinian culture.

“We want to spread the word and the taste of some dishes, [and make it clear] that there is a culture called Palestinian, and there is a food belonging to that country,” says Dahbour.

Dahbour is featured in an upcoming episode of KCET’s documentary series “The Migrant Kitchen,” alongside rising star and fellow Palestinian chef, Reem Assil. The episode, which airs tonight, highlights the chefs’ work and sheds a rare light on Palestinians and the Arab world through food. At a time when anti-Arab sentiment is front and center in many parts of the U.S., Assil and Dahbour serve up a message of understanding and acceptance. 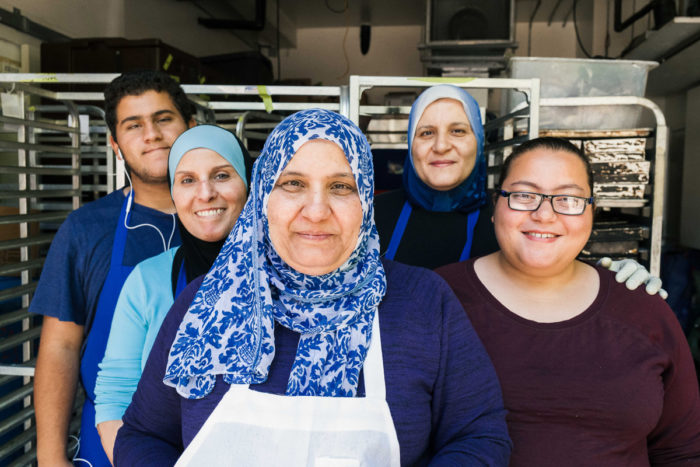 “Palestinians have been cooking forever, but we kind of hide behind our food,” says Assil. “We’ll call it ‘Mediterranean,’ we don’t call it what it is, because we’re afraid.”

The antidote, for both these chefs, is visibility. At Reem’s California, Assil’s Oakland-based bakery, she made the deliberate decision to call the menu “Arab street food.” For her, it’s a kind of reclamation.

“We should be proud to be Arab,” she says. “We’re a beautiful people, we’re not terrorists, we’re not all these backwards images that the media puts out about us.”

Inside Reem’s, voices singing in Arabic play over the speakers, a mural of a Palestinian activist graces the wall, and profiles of Middle Eastern artists, musicians, and thinkers are printed on each of the numbered order cards—like baseball cards for the culturally literate. And at Dyafa, the critically acclaimed Oakland restaurant Assil opened in April with Bay Area chef and restauranteur Daniel Patterson’s restaurant group, she’s bringing Syrian-Palestinian cuisine—often relegated to cheap-eats establishments—to a fine-dining setting.

An Unlikely Journey to Owning a Food Business

Though Dahbour is of Palestinian heritage, she was born in Kuwait. Her father left Palestine to escape political turmoil, undertaking an arduous desert crossing during which many of his friends died. In Kuwait, Dahbour grew up as the middle child in a large family. Around age 11 or 12, her mother was hospitalized for a time and Dahbour found herself in charge of the kitchen. She loved it. “[It] gave me a chance to be kind of the head of the household!” she laughs. 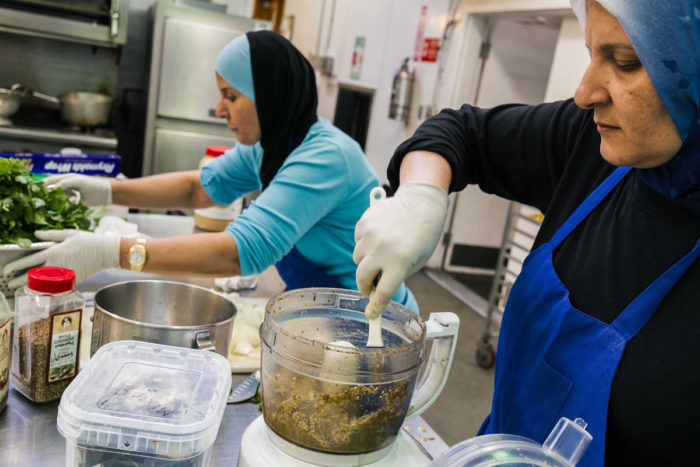 Lamees Dahbour at work in the kitchen. (Photo © Jim Sulllivan)

At that point, operating a food business never crossed her mind. Instead, she pursued higher education, eventually working in business administration for the United Nations, a job that took her all over the Middle East. In 2006, she decided to move to the U.S. with her husband and small children to follow her extended family. Dahbour is frank about surviving domestic violence from her former husband, and she’s measured when she talks about her divorce and living as a single mother with three kids in elementary school.

“It was really tough financially to do and run everything in the family,” she says. “I spent almost six years in court, in family court, in criminal courts, just to get my family situation stable.” Around the time when her kids were graduating from elementary and middle school, that time of year when many families bring teachers and principals gifts, Dahbour made some calculations: She couldn’t afford to buy gifts for all her children’s teachers, but she could cook up a Palestinian feast, and offer “traditional dishes that are not in the market.”

The response to her food was overwhelmingly positive, and guests asked her, “Why aren’t you opening a restaurant?” The manager of her housing complex, who always followed the incredible smells coming out of her apartment and eventually joined the family for meals, agreed—and it was this manager who introduced Dahbour to La Cocina.

La Cocina is a nonprofit incubator kitchen in San Francisco that supports working class food entrepreneurs, with a primary focus on immigrants and women of color. Now in their thirteenth year, La Cocina provides business resources and consulting for 35 to 40 entrepreneurs a year from their space in the city’s Mission District.

Assil is also a La Cocina alum and her path to working in food was just as nonlinear as Dahbour’s. Before baking had even crossed her mind, Assil was a community organizer and activist. Her trajectory toward food began after 9/11, when a crescendo of anti-Arab sentiment fed into her sense of anxiety and a lack of belonging. She got sick, left college in 2003, and came to stay with family in California. Here, she says, she nursed herself back to health through food, anti-war activism, and “finding my voice as an Arab woman.”

There was one dish that Assil found especially captivating: man’oushe, a chewy flatbread with crisp edges. It was man’oushe that she made with her family, and man’oushe that she saw again and again in local bakeries while on what she calls “a soul-searching trip to Lebanon and Syria.” 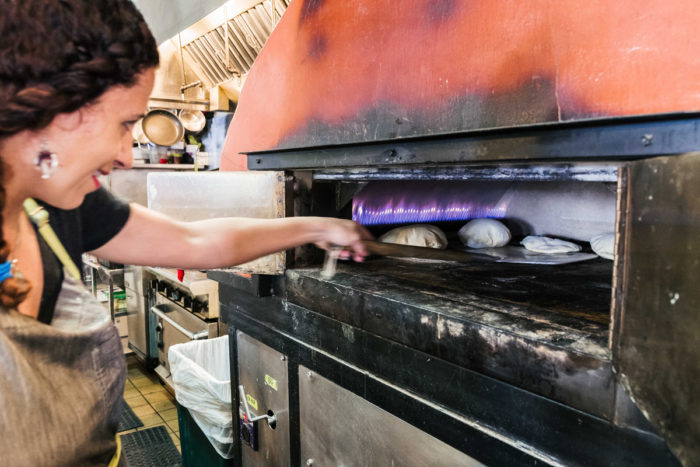 “For those of us from the Middle East, [man’oushe] is a household name, it’s something we grew up eating,” says Ramzi Salti, a Lecturer in Arabic at Stanford University. Salti, who is also featured in “The Migrant Kitchen,” is author of Arabology, a blog that highlights culture from the Arab world. Watching the growth in popularity of man’oushe here in the States has been something of a pleasant surprise, Salti says. “You live long enough, you see everything!” he laughs. In addition to being delicious, he adds, the flatbread is “supposed to have very healing qualities.”

For Assil, this healing wasn’t just physical, she also found it profound to explore the role bread plays in Arab cultures. “Bread is the lifeline, the oral history of my people,” she says. “It’s something that is accessible to both the rich and the poor and across cultures; everybody resonates with bread.”

In even the most remote mountain villages in the Middle East, Assil says, you’ll find a post office and a bakery. These bakeries are cornerstones in their communities, and seeing this inspired Assil to develop the concept for Reem’s at La Cocina in 2015. When a spot opened up at the busy Fruitvale Station transit hub in East Oakland the following year, it made perfect sense. Here, at a sunny corner spot just under the train platform, she serves up man’oushe covered in flavorful za’atar, shakshuka, lamb baked in turnovers, chewy sesame-coated bread called khobz sim sim, and rows of sweet pastries. 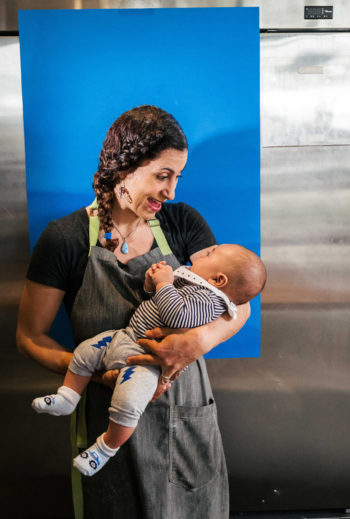 The restaurant has not been free from controversy, however. The large, colorful mural that decorates one wall of Reem’s Bakery—of a woman named Rasmea Odeh who, in 1970, at 21, was convicted by Israeli courts of participating in a bombing that killed two Israeli students—became a hot-button issue within weeks of the shop opening. While Assil sees Odeh as a civic leader and a symbol of resilience, an op-ed in The Jewish News of Northern California denounced the bakery for lionizing a “terrorist.” Hate mail and negative Yelp reviews followed, but Assil’s community rallied around her and the bakery. Today, the protesters have moved on, and the mural remains.

Both Assil and Dahbour stress the allyship they’ve seen from Jewish customers and friends. When her bakery was targeted, Assil says, “the first people to come to my side were my white and Jewish allies.”

On a similar note, Dahbour remembers how surprised she was when Israeli customers came to talk with her at her food tent, telling her where they were from and asking if they could reserve seats at her restaurant (there’s no brick-and mortar restaurant yet, however). The lawyer who volunteered to help register Dahbour’s business is Jewish and one of her closest friends; since he and his family keep kosher, she cooks vegetarian dishes for the meals they share so their families can eat together.

For both chefs, the lesson has been to model openness and civility, even when faced with opposition. “I feel like … food puts some peace between people,” says Dahbour, thoughtfully. “Food brings everyone to one table peacefully. I don’t think you’re going to cook for someone you hate.”

“One of the ways to counteract extremism or xenophobia is to show another side to the culture, or to the people, and what better way is there to do that than through food and cuisine?” asks Salti. His words are measured and cautiously optimistic. “Showing that side of the culture will perhaps lead to a better understanding of the region itself and show a better, more harmonious tomorrow.”

All photos by Jim Sullivan.