Our editors recommend these great books to read, share, and inspire. 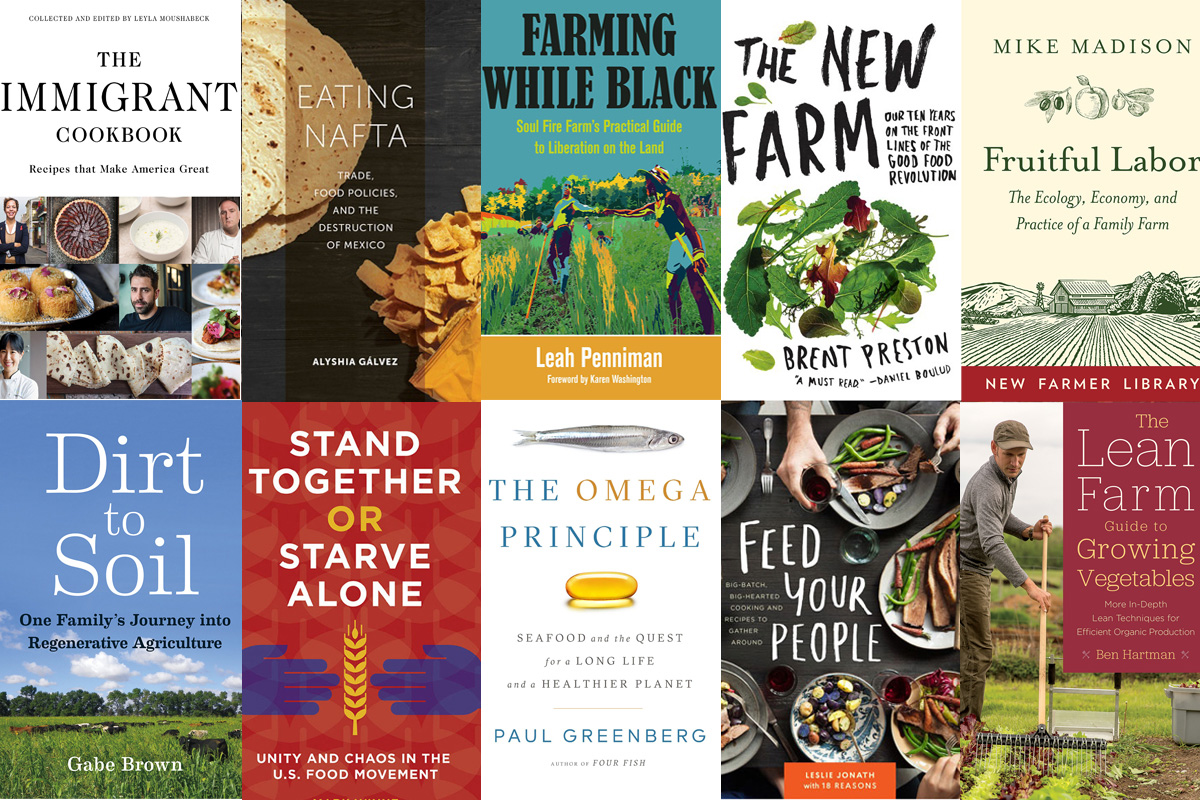 It’s that time of year again when we gather to celebrate the winter season with dear friends, good food … and a pile of inspiring books. Mindful that you’re all looking for good reading material, as well as potential presents, we serve up the Civil Eats’ Holiday Book Gift Guide: a selection of this year’s books we reviewed, talked about, and think are worth your time. Happy reading and gifting! 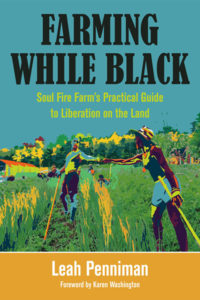 Farming While Black: Soul Fire Farm’s Practical Guide to Liberation on the Land
By Leah Penniman
Penniman’s new book is the distillation of her work on Soul Fire Farm, an operation in upstate New York where she and her husband have spent the last seven years raising not just organic produce, but a whole new generation of empowered and thoughtful Black and Latinx farmers. She weaves together her experience on the land with the rich, untold history of Black and Latinx farming against a backdrop of what she calls food apartheid. The result is a revolutionary work that opens important doors of opportunity for life and livelihood on the land. 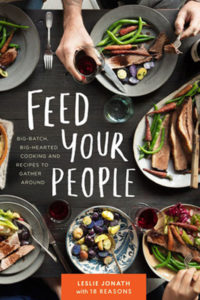 Feed Your People: Big Batch, Big Hearted Cooking and Recipes to Gather Around
By Leslie Jonath
The idea for Jonath’s new cookbook was born—ironically—from an experience she had eating solo. One night, she decided to attend a community meal at 18 Reasons, a San Francisco nonprofit that provides cooking classes to low-income residents and hosts monthly community dinners. As a single diner, she was a bit shy at the beginning of the meal, but it didn’t take long for her to feel the warmth of community inclusion. That light-bulb moment paved the way for a partnership with 18 Reasons and the collaborative creation of a “modern community cookbook,” which features recipes and practical instructions from 60 chefs on how to cook for large groups of people. 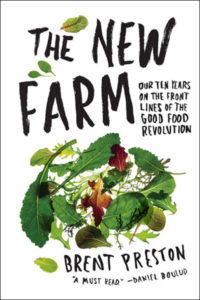 The New Farm: Our Ten Years on the Front Lines of the Good Food Revolution
By Brent Preston
In 2003, Brent Preston and his wife, Gillian Flies, packed up their two kids and moved to a rural town about 100 miles northwest of Toronto. Their initial aim was to live less chaotically and to raise some of their own food. But this morphed into a plan to make a living farming organically. The inevitable years of mistakes, false starts, financial hardship, emotional and physical exhaustion, scorn from local conventional farmers, perseverance and—at very long last—success, are documented with candor and humor in Preston’s book. He shares the lessons they learned from their first decade of rural experience, advice for other well-intentioned (and sometimes naïve) aspiring farmers, and what it might take to bridge the seemingly unbridgeable gap between conventional and organic farming. 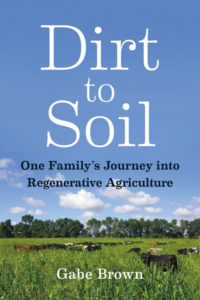 Dirt to Soil: One Family’s Journey into Regenerative Agriculture
By Gabe Brown
This book tells the detailed story of Gabe and Shelly Brown’s trials and errors as they built a diverse, resilient, no-till farming operation that operates completely without synthetic fertilizer, herbicides, or fungicides. The book provides an in-depth look at what it takes to build soil health and provides an intriguing window into the no-till regenerative world. The book also includes a half a dozen profiles of other farmers who have transitioned to a regenerative model in a diverse set of landscapes. When farmers tell Brown, “It’ll never work on my place,” as they often do, his response is “Do you have soil? Of course you do. If you have soil, regenerative agriculture will work.” 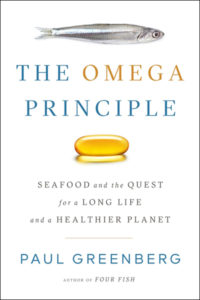 The Omega Principle: Seafood And The Quest For A Long Life And A Healthier Planet
By Paul Greenberg
For his newest book, journalist and author Paul Greenberg (Four Fish, American Catch) returns to the topic of seafood, this time viewed through the frame of omega-3 fatty acids. Greenberg elucidates the mechanisms behind the incredibly popular dietary supplement, examines its impact on the ocean, and embarks on a personal experiment to get to the bottom of an array of health claims. The result is informative and fun. 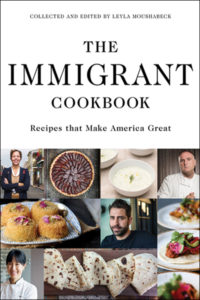 The Immigrant Cookbook: Recipes that Make America Great
By Leyla Moushabeck
Leyla Moushabeck knows that food has power, and over the past two years, as much of the country’s public dialogue—and its president—has been stridently anti-immigrant and often overtly racist, she has seen how people and policymakers have ignored not only the fundamental importance of immigration to U.S. history, but also its importance to our present economy. In this cookbook, Moushabeck gathers recipes from nearly 80 contributors representing 60 different countries of origin, that also reveal the memories, the stories, and the delights behind each dish, and highlight the power of food, and immigrants, to make change. 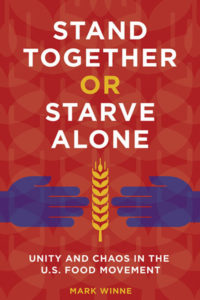 Stand Together or Starve Alone: Unity and Chaos in the U.S. Food Movement
By Mark Winne
For the past four decades, Mark Winne has been involved in almost every conceivable effort to nudge the food system toward greater equity and sustainability, from working in 1970s hippie co-ops to training food policy councils around the nation. But as his career winds down, Winne says the food movement is not gaining the achievements that it could be, based on the number of people it has attracted in recent years. In his book, he focuses on the cause of problems rather than their symptoms—such as acknowledging poverty as the root cause of hunger—and harnessing the power of food policy councils to create change at the local level through greater collaboration. 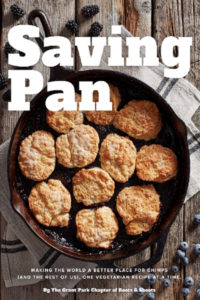 Saving Pan: Making the World a Better Place For Chimps (And the Rest of Us), One Vegetarian Recipe at a Time
By The Grant Park Chapter of Roots & Shoots
A group of Portland teens, part of a Jane Goodall-inspired community action, created this cookbook to help save orphaned chimps, and it includes vegetarian recipes from Michelle Obama, Michael Pollan, and world-famous chefs. 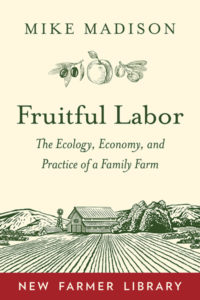 Fruitful Labor: The Ecology, Economy, and Practice of a Family Farm
By Mike Madison
Madison wants to make it clear that his book is not meant to be a guide—even if it does at times veer into granular detail about his farming practices. Instead, he refers to it as a “report card” to himself, a 30-year journal of the small family farm he created in California’s Sacramento Valley with his wife Dianne. This isn’t an idealistic, everyone-should-become-a-farmer kind of book—it’s factual, at times radically transparent, accounting of the hardships, challenges, and rewards involved in farming. Madison’s prose is witty, slightly sarcastic, and poetic at times, which makes reading about seemingly mundane details like tractor parts and the energy efficiency ratio of crops a pleasure. 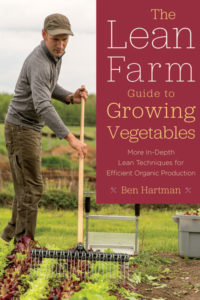 The Lean Farm Guide to Growing Vegetables
By Ben Hartman
In his 2015 book The Lean Farm, Hartman detailed how lean manufacturing techniques could be broadly applied to agriculture; in this follow-up, he goes deep on the specifics of adapting the principles to vegetable growing, from starting seeds and plant spacing to making compost and using specific tools to cut out waste.

Eating NAFTA: Trade, Food Policies, and the Destruction of Mexico
By Alyshia Gálvez 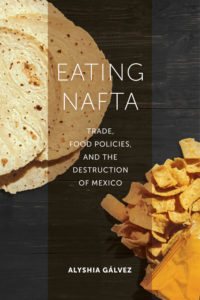 Gálvez, a professor of Latin American, Latino, and Puerto Rican Studies at the City University of New York, digs into the history of the North American Free Trade Agreement and its impact on food systems in the U.S. and Mexico—two countries she says are competing neck-and-neck for the nation with the most obese population. Gálvez dissects the web of corporate marketing power, public health, and changing tastes that has entangled the two countries and lead to “fewer people farming, on bigger farms, with larger productive capacity.”

We Fed an Island
By José Andrés
A first-person account of the work Andrés and a team of chefs did in Puerto Rico following Hurricane Maria—a feat for which Andrés has since been nominated for a Nobel Peace Price.

Hippie Food: How Back-to-the-Landers, Longhairs, and Revolutionaries Changed the Way We Eat
By Jonathan Kauffman
Kauffman, a San Francisco-based food writer and journalist, argues that the most important contribution the counterculture movement of the 1960s made to U.S. culture was the changes it brought to the food system.

Heartland: A Daughter of the Working Class Reconciles an American Divide
By Sarah Smarsh
Smarsh’s memoir about growing up poor on a Kansas farm sheds light on the larger plight of rural Americans faced with decades of food industry consolidation and the drive for cheap food.

Unsavory Truth: How Food Companies Skew the Science of What We Eat
By Marion Nestle
A detailed look at the numerous ways food companies have manipulated nutrition science, including research from the new University of California at San Francisco Food Industry Documents archive (See our related story on the archive here.)

The Poison Squad: One Chemist’s Single-Minded Crusade for Food Safety at the Turn of the Twentieth Century
By Deborah Blum
The story of Harvey Washington Wiley, a chemist who worked tirelessly with Upton Sinclair and Theodore Roosevelt to bring about a new era of safe food at the turn of the last century—and later went on to become the first commissioner of the U.S. Food and Drug Administration (FDA).

The Potlikker Papers: A Food History of the Modern South
By John T. Edge
Edge, a food writer and director of the Southern Foodways Alliance, presents a “panoramic mural of the South’s culinary heritage, illuminating the region’s troubled place at the American table and the unsung role of cooks in the quest for social justice.”

Milk: A 10,000-Year Foodie Fracas
by Mark Kurlansky
The author of Cod and Salt sets his sights on the complex story of milk and looks at how this once-common dietary staple became “a test case in the most pressing issues in food politics, from industrial farming and animal rights to GMOs, the locavore movement, and advocates for raw milk, who controversially reject pasteurization.”

Food from the Radical Center: Healing Our Land and Communities
By Gary Paul Nabhan
Nabhan tells the stories of diverse communities collaborating to bring back North America’s Native foods such as bison, ancient grains, and heritage turkeys.