Maine Is Scaling Up its Local Grain Economy | Civil Eats

Maine Is Scaling Up its Local Grain Economy

Craft brewing, artisanal baking, and innovative mills and malthouses are reviving the state's economic might. 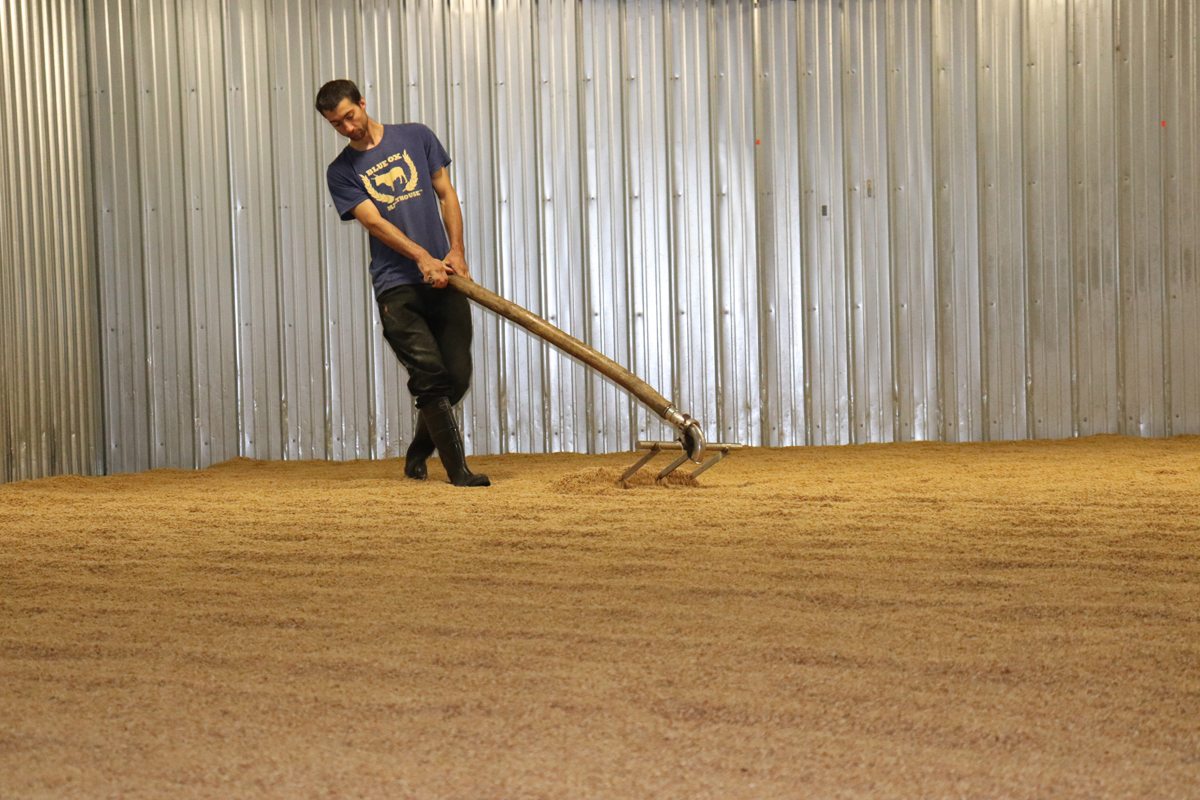 Joel Alex didn’t have experience with grain malting or a business background when he launched Blue Ox Malthouse at 27. But he saw a need.

In 2012, Alex met a craft brewer who said he was unable to find local malt, the primary ingredient for beer making, in Maine. Instead, the brewer was buying malt from Canada, via a New York distributor.

Within four months, the wiry, intense beer aficionado left his job and apartment and secured a $1,000 grant to develop a business plan. He spent the next 18 months learning about malting grain and running a business—often while living out of his car. By 2014, he had found a business partner and a location in an empty warehouse in Lisbon Falls, half an hour north of Portland. One year later, Blue Ox was in business, producing malt from barley, wheat, and other grains produced by Maine farmers.

Malt is produced by soaking, germinating and drying grains, and it imparts beer and other foods with distinct flavors, depending on the type of grain and technique used. Today, Blue Ox sells 10 styles of malt to 90 craft breweries, both within and outside of Maine, and has the capacity to process about 1 million pounds of raw grain each year. In business-speak, Blue Ox is a “gazelle,” young and very fast-growing. It’s also one of the two largest traditional floor-malting facilities in North America.

In floor malting, the grains are germinated and dried on a stone floor, rather than by mechanized germination chambers and dryers. Craft brewers often favor these traditional malts because the process imparts richer, more aromatic flavoring than industrial malting methods used by larger brewers and distillers. 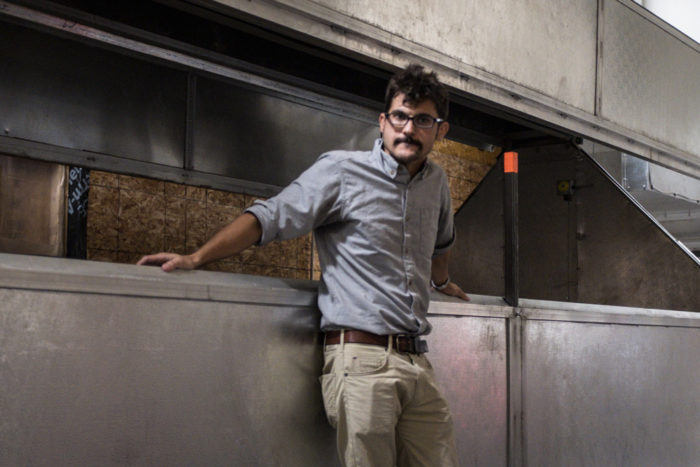 Joel Alex, founder of Blue Ox. (A video showing Blue Ox at work with their malting floor is embedded at the end of this article.)

Alex is one of a dynamic cohort of innovators who are working to reshape Maine’s agricultural landscape—from farm to processing to market—by bringing back the production of high-quality, heritage, and landrace grains lost more than a century ago to the Midwest. Such efforts have been percolating in the state for decades, similar to others taking place in states like California, Pennsylvania, and New York. Now, these businesses are poised for growth as an inter-connected group of financiers, agricultural researchers, and business support groups works to help them revitalize Maine’s rural landscape through bread, pastries, noodles, and beer.

The long, steady demise of Maine’s paper mills has left a gaping wound in the state’s rural economy, with thousands of job losses and poverty rates climbing from 13 to 14 percent in 2000 in the state’s northernmost counties, to as high as 19 percent in the latest census. Development groups like the Coastal Enterprises, Inc. (CEI), the Maine Grain Alliance, Slow Money Maine, and Focus Maine believe that rebuilding a grain value chain can help pump some life back into rural communities.

“We’re looking at the market opportunity,” says Gray Harris, a senior program director at CEI. “With the explosion of craft brewing and artisanal baking, there is market demand for flours and malt and heritage and local grains.”

Maine also has the land base to supply the entire Northeast with high-quality-premium grains, according to Tristan Noyes, director of the Maine Grain Alliance. Some 50,000 acres are currently cultivated by potato growers, most of whom rotate their crop with grains, such as rye, wheat, and oats, to maintain soil health. Historically, however, these grains have been plowed under, used for animal feed, or sold to commodity markets, which fetch an average $150 per acre, according to Noyes.

In contrast, potatoes gross about $3,000 per acre, which is why many Maine farmers haven’t bothered to invest in producing grains for specialty markets like restaurants, bakeries or malthouses. Instead, they’ve viewed crop rotation as lost revenue.

“Our challenge is to incorporate these grains in a way that creates value for farmers and the specialty markets,” says Noyes, a sixth-generation potato farmer who also grows landrace flint corn on his organic vegetable farm in Caribou, Maine.

Noyes tells farmers, “Don’t look at it as lost revenue; look at it as a way to make profit.” In other words, don’t plow under grains; work with a grain processor and make a little money.

So far, around 30 farmers have begun growing for Maine’s grain entrepreneurs, and Harris says they’ve seen success. But there’s room for more.

Blue Ox Malthouse and other processors like it—Aurora Farms and Mill, Maine Grains, Maine Malt House—are tapping into just a sliver of Maine’s vast grain potential, and serving a fraction of the demand from the brewing, baking, and restaurant industries. That’s why CEI and others are raising capital, providing technical assistance, and networking with farmers to help scale these grain processors, and bring more online.

As these entrepreneurs look to grow, they’re all wrestling with how to maintain their local authenticity and help the communities in their own backyards.

“Volume isn’t the only way to grow,” says Maine Grains’ co-founder Amber Lambke. She opened the certified organic stone mill in 2012 in a five-story, Victorian jailhouse in Skowhegan, a northern Maine town where nearly one-quarter of residents live below the poverty line. 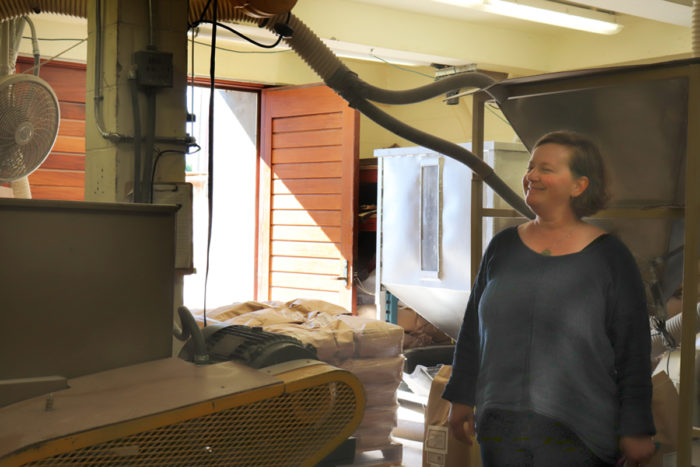 Lambke, now 44, has been a mover and shaker in the region for more than a decade. She began organizing a farmers’ market in the town to benefit the community, many of whom receive Supplemental Nutrition Assistance Program (SNAP) benefits. The idea for the baking-focused Kneading Conference arose around her kitchen table in 2006, she says, inspired by local oven mason Albe Barden. Motivated by the conference, Lambke visited millers throughout the Northeast, most of whom were tinkering in farmers’ barns, and attended a class in Kansas to learn how to mill grains.

Today, Maine Grains provides heritage and organic flours and grains to bakers, brewers, chefs, and restaurants as far away as Manhattan, and Lambke is in conversation with Vermont-based King Arthur Flour about a possible partnership. Maine Grains’ mill employs eight people; several small businesses, including a café and yarn shop, also rent space in the building.

Lambke says that slow, steady gains to build the mill’s capacity, while hiring local people, promoting organic farming, and producing food for the community is the kind of growth in which she’s interested.

A common quandary in the entrepreneurial world, she adds, is the financiers want to know your exit strategy, or your plan to sell. “But if that’s not your exit strategy, what is it? What if I want the business to continue benefiting Skowhegan? That might not happen if I were to sell to a larger enterprise that were not situated in Maine,” she says.

For Matt Williams, who runs the certified organic Aurora Farms and Mill with his daughter Sara, growth must come through buyers who share their values. Williams, 74, cites One Mighty Mill in Lynn, Massachusetts as an example. That business provides whole-grain tortillas and bagels, made with the Williamses’ transitional wheat, to Boston Public Schools, and offers a price discount for residents of Lynn, a low-income community. 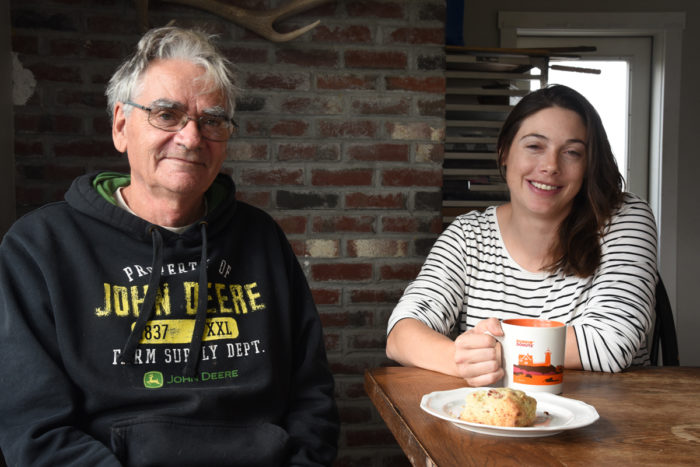 Matt and Sara Williams, owners of Aurora Farms and Mills.

A pioneer of Maine’s grain movement, Williams began growing and milling organic wheat and oats on his farm in Linneus, just a stone’s throw from the Canadian border, when he was approached by an artisanal baker, Jim Amaral, in 1997. Williams named his mill Aurora, to underscore his partnership with Amaral’s bakery, Borealis Breads.

It wasn’t until 2013, when Sara, then 31, returned home after a decade working in Washington, D.C., that the operation took off. Sara brought a business acumen to her father’s farming and science know-how, and together they expanded the farm from 70 to 350 acres, added buckwheat, rye, peas, and soy to their crop varieties, quadrupled their buyers, and invested in the infrastructure needed to grow the business—grain storage tanks, and additional milling and cleaning equipment.

The Williamses’ buyers include Blue Ox Malthouse and Allagash Brewing, which recently committed to sourcing 1 million pounds of Maine-grown grains annually by 2020. That’s a “very big deal for the state,” says Sara. 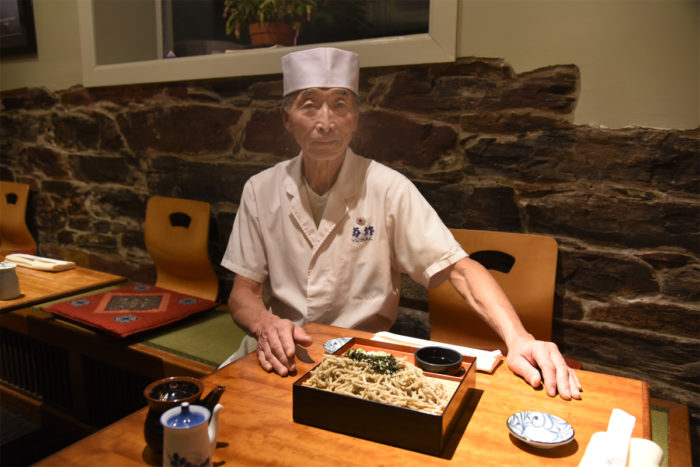 Takahiro Sato with the soba noodles he handcrafts in the kitchen of his Portland restaurant, Yosaku, using buckwheat from Aurora.

Core to the Williamses’ growth plans is helping other Mainers learn to farm organically. “One of our key roles in this whole deal is empowering other people,” says Matt, a former county cooperative extension agent. “Our goal is to figure out the rotation so that we can help [other growers] scale up more easily.”

So far, Maine’s grain innovators have created a few dozen jobs. That’s not much, but each business has spurred ancillary economic activity and created powerful ripple effects throughout their communities—spreading organic farming, getting healthier grains in the diets of low-income populations, and bringing back hope to abandoned paper-mill towns.

When Blue Ox set up shop in 2014, the former mill’s dilapidated building was literally casting a shadow over Lisbon Falls, says Alex. It’s gone now, torn down, and businesses are coming back. Two new restaurants carry beers made from Blue Ox malt, and they promote Blue Ox on their menus as part of the local story.

“We were able to help change the narrative about the depressed mill town and get some buzz as we got up and running,” says Alex. “There’s this excitement and revitalization happening; we’ve been contributing to it and we’ll keep building with it.”

Top photo: Floor-malting wheat at Blue Ox Malthouse, courtesy of Diane Shohet. All other photos by Meg Wilcox. A video showing Blue Ox at work with their malting floor is embedded below.