More than half of Arizona's farms are run by Native Americans, and they’re now poised to scale up centuries-old sustainable practices to tap into global trade.

Thirty miles south of Phoenix, green fields of alfalfa and pima cotton stretch toward a triple-digit sun. Hundreds of yellow butterflies dance above the purple flowers that dapple the tops of the young alfalfa stalks—to expert eyes, the flowers signal that the plants are heat-stressed and should be harvested soon.

Gila River Farms near Sacaton has been growing alfalfa and high-end cotton—which is named after the Pima people who inhabited the Gila and Salt river valleys—for 50 years. That’s a long time by current standards but merely a flash considering that the roots of Arizona’s agriculture reach back thousands of years. 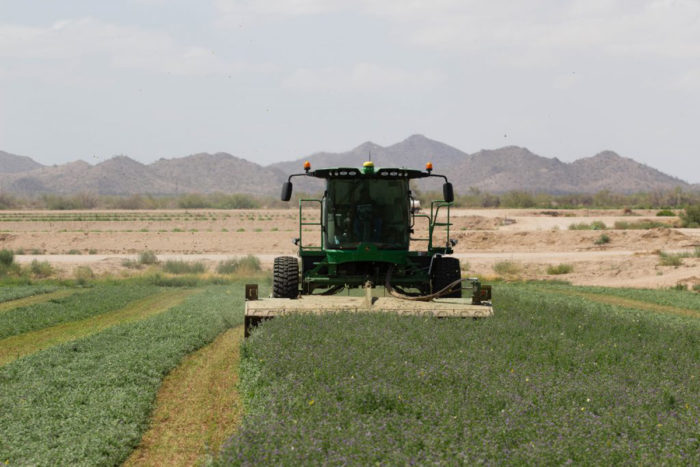 Today, Native Americans are the primary operators of more than half of all farms or ranches in the state, making Arizona’s agriculture landscape unique compared with other states, according to the 2014 national agriculture census. Native American farmers sold nearly $67 million worth of agricultural products in 2012, about 2 percent of the $3.7 billion in agricultural products sold in Arizona that year, according to the Arizona Farm Bureau.

Native American farmers grow crops as diverse as tepary beans, olives, and squash, some for community use and some sent around the world. The Navajo and Hopi tribes feed their communities by focusing on cultural traditions, including dryland farming.

Stephanie Sauceda, interim general manager for Gila River Farms, said the farm is the original test site funded by the federal government to grow and harvest extra-long staple pima cotton, which is considered a superior strain.

Farming extends back centuries for indigenous people, she said.

“It was just something that Native American people do, not only in Gila River, but also in other tribes. That’s how we survived,” Sauceda said. “We did the hunting of the animals, we grew our corn and our wheat, and that’s how we actually survived—how our ancestors survived.”

The natural next step, she said, is to send crops to the rest of the world. 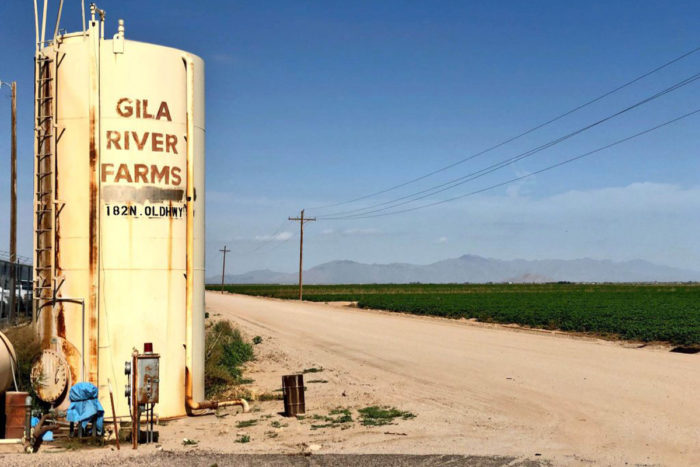 Sauceda said alfalfa and cotton, which are the farm’s most profitable products, end up in such places as the Philippines, Vietnam and China.

“We represent the community with our products that go out the door,” said Sauceda, who’s only the second woman to be general manager. She and her employees take pride in being able to bring their product into the global market.

“We have a really good name out there.”

The farm is growing crops on 10,000 acres, rotating alfalfa and cotton on much of that land, Sauceda said. It generates about $10 million annually.

In northern Arizona, members of the Hopi Tribe maintain their cultural and traditional heritage through farming, said Michael Kotutwa Johnson, a Hopi doctoral candidate at the University of Arizona’s School of Renewable Natural Resources and the Environment.

“For Hopi, farming is our way of life,” Johnson said.

Hopi farmers own small plots of 1 to 9 acres and use the traditional technique of dryland farming, which means crops rely only rainfall, Johnson said. Dryland farming requires seeds be planted deeper than crops for commercial use, he said.

Hopi agriculture largely is subsistence-based, meaning farmers grow food for their families rather than for commercial sale, Johnson said.

Wrangling Tradition with Women as Leaders

One hundred miles south of where the four corners of Arizona, New Mexico, Utah, and Colorado meet, three members of the Navajo Nation lead a biweekly farm-board meeting.

The two women and one man conduct the meeting in both English and Diné to be sure the older generation can understand policy changes and upcoming projects.

The farm board discusses a five-year project to update fencing, irrigation and farm equipment. 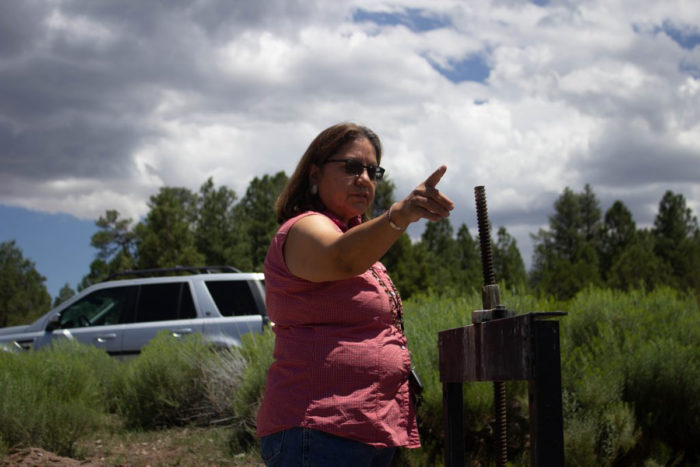 Lorena Eldridge, farm board president for the Tsaile Wheatfields-Black Rock Chapter on the Navajo Reservation, explains how the irrigation systems have been updated in recent years. (Photo By Tayler Brown/Cronkite News)

Navajo farmers differentiate themselves from most U.S. farms in a key way: Nearly half of all farms on the reservation are operated primarily by a woman, Eldridge said.

According to the 2012 agriculture census, women represent about 30 percent of the total number of American farmers, but only 14 percent of farms are operated by a woman.

Still, younger generations are moving away from farming on reservations.

One third of all Native American farmers are older than 65. Eldridge is working to secure investments from the Navajo Nation government to attract younger people to farming. The farm board secured $5 million for the five-year project, which will complete its first year in December.

“For me, the farm board connects me to my history and culture,” Eldridge said.

Some Native American farmers carry on crop-based traditions, whether for commercial or community uses.

Blue corn, beans, and traditional teas and berries, such as greenthread tea and sumac berries, are grown on Native American farms across Arizona.

Ramona and Terry Button pulled the native bavi bean, commonly referred to as the tepary bean, from the brink of obscurity in the late 1970s, said Velvet Button, their daughter. 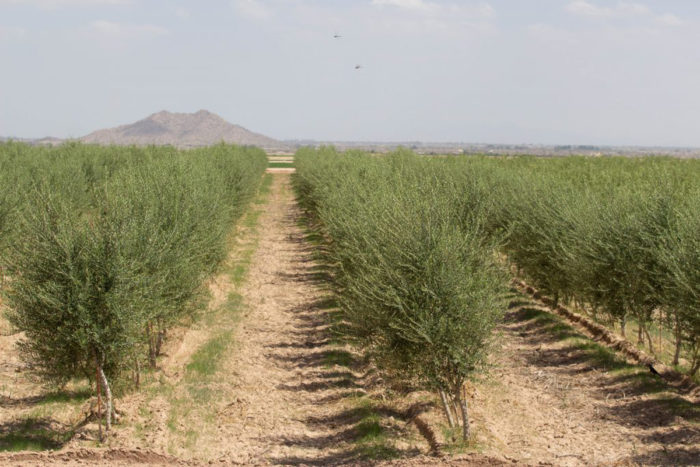 Drought had put many other local farmers out of business, but Ramona Farms on the Gila River Reservation survived, in part based on reclaiming a bean that had been around for centuries.

“We lost our market when large grocery stores moved in closer to the reservations and took over the mom and pop shops that were servicing the rural communities,” she said.

The tepary bean comes in black, white, blue speckled, and other colors, Button said, and is an important staple food for several tribes.

Ramona Farms, family owned and operated, generates 90 percent of its income from such commercial crops as cotton, wheat and alfalfa, but the Button family’s passion is promoting and educating people about indigenous foods.

Water scarcity, the proliferation of grocery stores and a lack of agriculture education and policy have been hurdles to food sovereignty that organizations such as the Indigenous Food Systems Network and the Native American Food Sovereignty Alliance are working to overcome.

“The huge food sovereignty movement has helped connect us once again as indigenous communities and our traditional food sources,” Button said. “Our communities are so remote that we need to be able to sustain ourselves.”

According to 2016 data published by the Arizona Department of Health Services, American Indians are disproportionately affected by chronic diseases, such as diabetes. Native Americans die at three times the rate to diabetes compared with the state’s average the report said.

Refocusing on traditional foods and incorporating them in new recipes has been a stepping stone to improving the community’s health education, Button said.

“When you see the community growing their own food, being involved in the process—it really makes a difference,” Johnson said. “When you give people access to this, you see rates of diabetes going down and you see everyone’s well-being going up.”

This article originally appeared on Cronkite News and is reprinted with permission.

For more stories from Cronkite News, visit cronkitenews.azpbs.org. Cronkite News, the news arm of Arizona PBS, is operated by Arizona State University’s Walter Cronkite School of Journalism and Mass Communications and staffed by students of the school.


Top photo: Velvet Button, spokeswoman for Ramona Farms and daughter of the owners, discusses how the tepary bean grows and is harvested. (Photo By Tayler Brown/Cronkite News)

Tayler Brown is currently a student at the Walter Cronkite School of Journalism and Mass Communication. Read more >