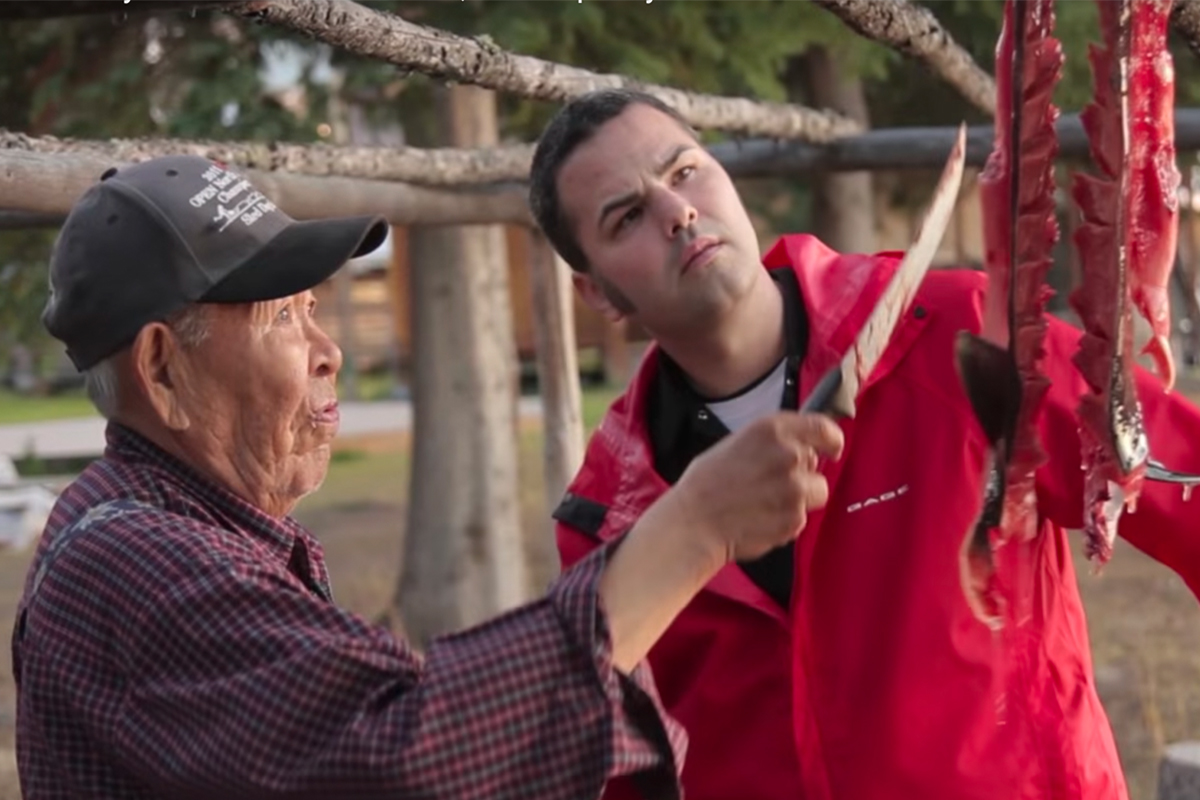 Rob Kinneen didn’t take his first bite of fresh asparagus until adulthood, when he was a student at the Culinary Institute of America (CIA) in New York. “That was one of the first times I realized vegetables could taste good,” he says. “The flavor was so different than the canned goods I’d grown up with.”

Raised mainly in Anchorage Alaska, where produce can be hard to find and often very expensive, Kinneen wasn’t exposed to much in the way of fresh fruits or vegetables. His connection to food, however, was always there.

“There was still an affinity with the land and with food,” he says. “We harvested a lot of seafood, we hunted, we went clam-digging.” He remembers his mom baking fresh bread and picking fresh rhubarb and eating it raw, dipped in sugar. And when his dad grew potatoes for the first time, Kinneen helped him harvest them. “We boiled them and ate some that same day, and I remember how earthy they tasted,” he recalls.

These memories, coupled with a desire to connect with his Tlingit heritage, led to an interest in cooking with locally sourced, indigenous Alaskan foods.

After attending CIA, and working in restaurants in New Orleans, Los Angeles, and North Carolina, Kinneen made his way back to Anchorage, where he lived and worked for 15 years. To be closer to extended family, he and his family recently relocated to North Carolina, where he serves as executive chef for both Happy Cardinal Catering and the Italian restaurant The Boot. And he travels back to Alaska regularly and still considers it “home.”

“Getting married and having children helped me realize I needed to know more about my own Alaskan heritage,” says Kinneen. 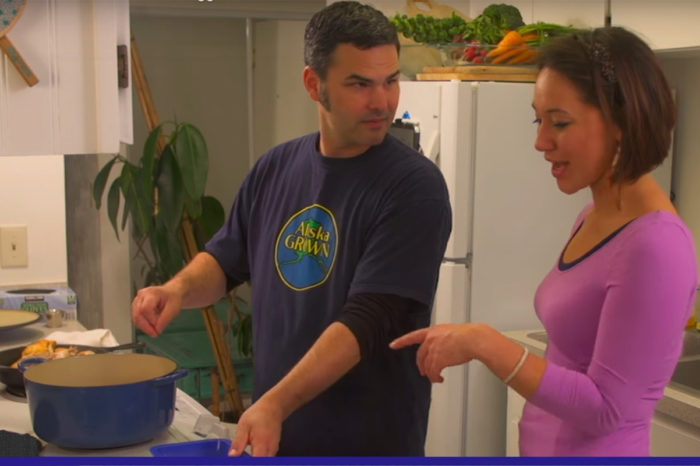 Rob Kinneen cooking with one of the health educators at the Southcentral Foundation as part of his “Fresh Alaska” web series.

Kinneen’s series give his audience the chance to see how local foods can be prepared at minimal cost. “Making these videos helped show what food means in different regions of the community,” he says. “It also inspired me to consider how people are finding answers to food sustainability.”

As part of his work, he visited places like Tyonek, Alaska, southwest of Anchorage; the town’s conservation district recently spent a million dollars to build a culvert over a salmon stream to help the fish migrate. Kinneen saw firsthand how the Tyonek Tribal Conservation District has worked to take back health and wellness in the community through sustainability, with programs such as the “seed start” program at the local school.

“They have a greenhouse and an irrigation system that is set up with a solar generator,” he says. “Solar panels have a life of 30 years, which makes them much more viable than using a regular generator and diesel fuel.” 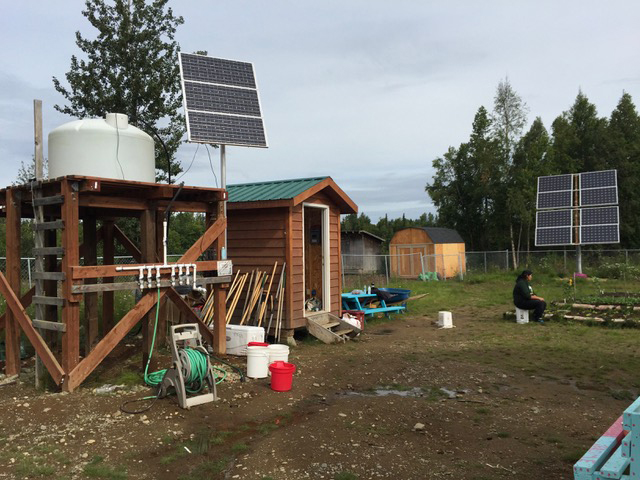 He also visited Meyers Farm in Bethel, where owner Tim Meyer has created a successful organic farming community in far western Alaska, producing hundreds of pounds of produce each season.

“Ninety-six percent of the food in Alaska is imported, which leads to questions about food security,” says Kinneen. “Tim Meyer is growing produce on the tundra. He uses cold-climate farming techniques and grows on a nutrient-rich riverbed. The produce is preserved in an underground cellar with a drip oil pan stove that keeps temperatures at about 34 degrees. If you can successfully grow vegetables in a place like Bethel, I think you can do it almost anywhere.”

Grocery stores in the more remote areas are especially poorly stocked. “It’s not unusual to see a $19.00 fermented [i.e., old] pineapple or a $9.00 head of brown iceberg lettuce for,” says Kinneen. For this reason, making fresh and natural food accessible to all people has also become a passion project for Kinneen, and he has partnered with groups like the Food Bank of Alaska to highlight how Alaskans can use the Supplemental Nutrition Assistance Program (SNAP) dollars (or “food stamps”) at farmers’ markets.

With one in seven people in the state considered food-insecure, and access to SNAP threatened in negotiations over the current farm bill, helping people eat nutritious, local food whenever possible is more important than ever. And Alaska’s remote geography often means that its communities face additional obstacles in accessing resources, and thus they must rely on wild foods to fill the gaps. 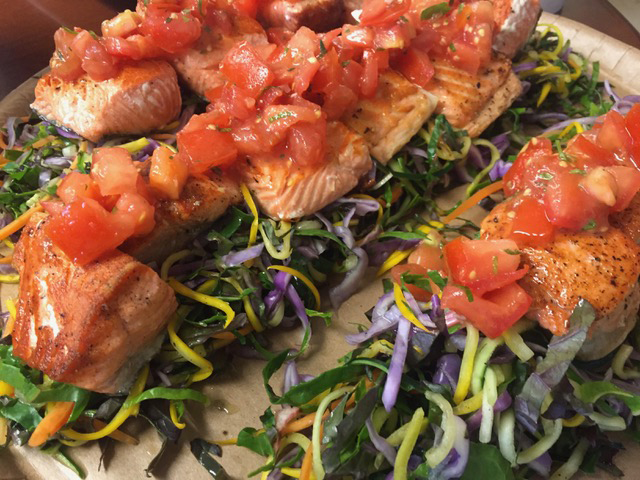 Roasted salmon served on a bed of Tyonek-grown vegetables; only the salt, pepper, and oil came from outside of Alaska. (Photo courtesy of Rob Kinneen)

Kinneen’s work has culminated in his new cookbook, Fresh Alaska. The recipes, such as arctic polenta with razor clams, combine contemporary, upscale cooking with traditional Alaskan food. It’s a big step for Alaska cookbooks, despite the fact that chefs in high-end restaurants around the state have been  incorporating indigenous ingredients such as foraged mushrooms, spruce tips, and locally caught seafood in recent years.

“My main beef with Alaskan cookbooks is that they are either very esoteric or they don’t contain Alaskan ingredients,” he says. “I wanted to promote the people and places I came from, with insight into the subsistence side, [while] also being responsible as a chef.”

While Kinneen and his family enjoy their life in North Carolina, his Alaskan roots are never far from his mind. “The experiences I had at places like Meyers Farm and Tyonek were a huge inspiration for my cookbook,” he says. “To see the efforts of a small village to take back food sustainability and prosper is truly humbling. Food is the connection between all of us.”