Election Day Cake: A Recipe to Help Rebuild Our Democracy

The blueprint for a 200-year-old coffee cake is making a revival this Election Day as a way to build community and nourish voters. 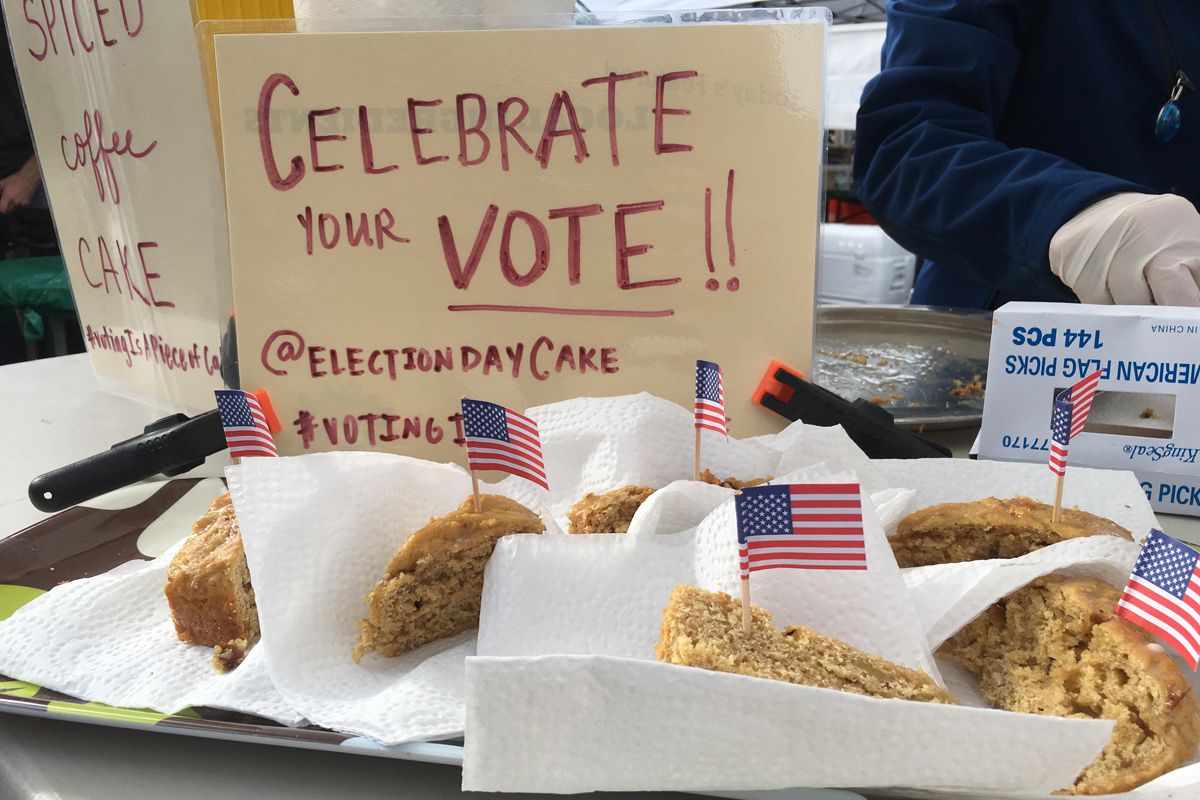 Since the last election, I’ve felt a strong drive to reignite my connection to community—it didn’t matter which one, only that I step out of my self-imposed bubble and get to know my neighbors and meet people I didn’t know existed.

For the past two decades, I’ve led a double life as a chef as well as a food writer, during which time I’ve learned firsthand how food is not only an extraordinary bridge, but a powerful teacher. It is in the kitchen where nothing matters but the alchemy of preparing a meal. Everyone has a role to play in bringing food to the table, and everyone is anyone.

Last year, I spent several months teaching at a YMCA near where I live in Seattle, cooking with neighbors aged 5 to 75 and speaking the language of vegetables and discussing the magical link between what we eat and how we feel. In Houston, just a few weeks before Hurricane Harvey came barreling through, I served as part of a chef delegation working with several community efforts, from refugee farmers to summer camp for kids in cancer treatment.

And earlier this year, I started volunteering for a local caterer who hosts a monthly community meal in Seattle, open to all. Lunch is on her, and the 200-plus guests who line up embody the fabric of our republic—seniors, the homeless, tourists, parking attendants, fishmongers, artists, baristas.

All these experiences have paved the way to cake. And not just any cake—Election Day Cake. 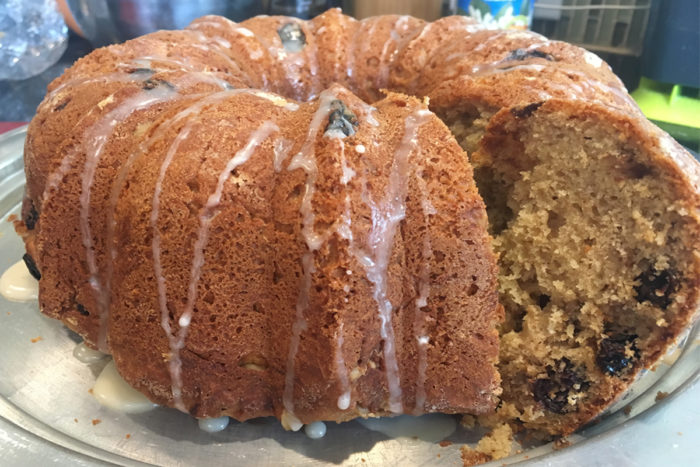 A dozen years ago, while writing a food blog for The Washington Post, I learned the story of a yeasted coffee cake that women in colonial New England would make for weary voters who traveled great distances to cast their votes. The homey cake, loaded with dried fruit and nuts, was sustenance for the long journey home.

And here we are, on the eve of an extraordinarily charged midterm election, after more than 600 days of high drama, political vitriol, and a collective sense of doom that many Americans have never experienced.

It occurs to me that cake might be just the salve, a hint of sweetness to take the edge off a terrible, horrible moment in our history. Instead of succumbing to dread, I decided to bake a whole bunch of cake and share with the neighbors, spreading good cheer and the urgency of voting to save our democracy. We all could use a little levity, and if it gets more of us to the polling stations, what’s not to love?

Thanks to a heads-up from Philadelphia cookbook author Marisa McClellan that the @electiondaycake handle was available on Instagram, I posted my “call to cake” two weeks ago and got right to work. 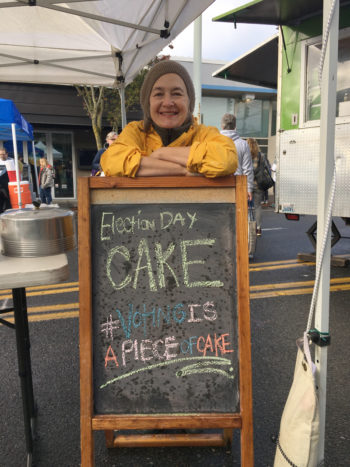 My two-pronged intention—sharing the idea on social media, and then putting that idea into practice, cake crumbs and all—quickly took hold.

Dallas-based chef Brenda Aviles spread the word on Facebook and shared the recipe with her culinary students. It caught the attention of food reporter Adriana Janovich at the Spokesman Review in Spokane, Washington. And D.C.-based cookbook author Cathy Barrow, who’s currently on book tour, told me that she planned to be home in time to vote and bake a cake on election eve to share with her neighbors.

Here in Seattle, I brought a whole cake to yoga class, then later shared slices with Heather, the woman who cuts my hair, and my next-door neighbor, Helen, a young farmer studying at the University of Washington. This past weekend, I made enough cake to share with 150 people and headed out to two of my local farmers’ markets. Nobody passes up free cake, of course, and a bunch of people took recipe print-outs and said they were planning to make the cake. I encouraged people to come by and “celebrate our right to vote with non-partisan cake crumbs.”

Most people who came by the table had already mailed in their ballots (voter turnout in King County, where I live, has already surpassed 40 percent, as of Sunday), but there were a few people, in their early 20s, who had not. One in particular came by with a friend, and told me she didn’t know if she would vote. I handed her a slice of cake and told her to think of me—and this cake—when she went home to fill in those dots.

And that’s the thing about Election Day Cake—it’s impossible not to share, and talk about, and ponder, and keep baking. On this Election Day, we as a nation are on track to surpass voter turnout for the 2014 midterm election. And isn’t that the point of a democracy, getting as many people to vote as possible? Isn’t that worth celebrating—with cake?

Today, I’ll be joining the friend who hosts the free monthly lunch, and together we’ll fire up the oven and bake some cakes for voters and passersby—and inevitably share the story of how this cake came to be. I hope you’ll join me—the recipe is below (and on my website)—and I invite you to share photos of your cakes with the Instagram hashtag #votingisapieceofcake.

Directions
In a medium bowl, fork whisk the yeast and water until well blended, then add the milk. Gradually add 1 ½ cups of the flour, stirring with a rubber spatula until the mixture is smooth. Cover and let rise in a warm, draft-free spot until somewhat bubbly, about 30 minutes.

Using a stand mixer or hand-held electric beater, cream the butter and sugar until light yellow and malleable. Add the eggs one at a time, beating after each addition. Add the yeast mixture until just incorporated. (Note: if you are not using paddle attachments, stir the yeast mixture by hand.) Gradually add dry ingredients, beating until smooth after each addition. Gently add the fruit-nut mixture until evenly distributed.

Grease and flour a 9-inch tube pan or large Bundt pan. Pour the batter into the prepared pan. Cover and let rise in a warm, draft-free spot until the batter is puffy and doubled, 1 ½ to 2 hours.

Preheat the oven to 350 degrees F. Bake until the cake is golden brown and a skewer inserted into the center comes out clean, 45 to 50 minutes.

Cool for 10 minutes, then loosen from the edges of the pan with a knife. Invert and cool completely on a rack, about 30 minutes. While the cake cools, make the glaze.

In a small bowl, whisk together the confectioners’ sugar, vanilla, and milk, until desired spreading consistency. Drizzle the glaze on the top and along the sides of the cake.

All photos courtesy of Kim O’Donnel.