What’s Behind the Crippling Dairy Crisis? Family Farmers Speak Out.

In the Northeast, the dairy crisis is shuttering generations-old dairies. Can the crisis become a rallying political issue? 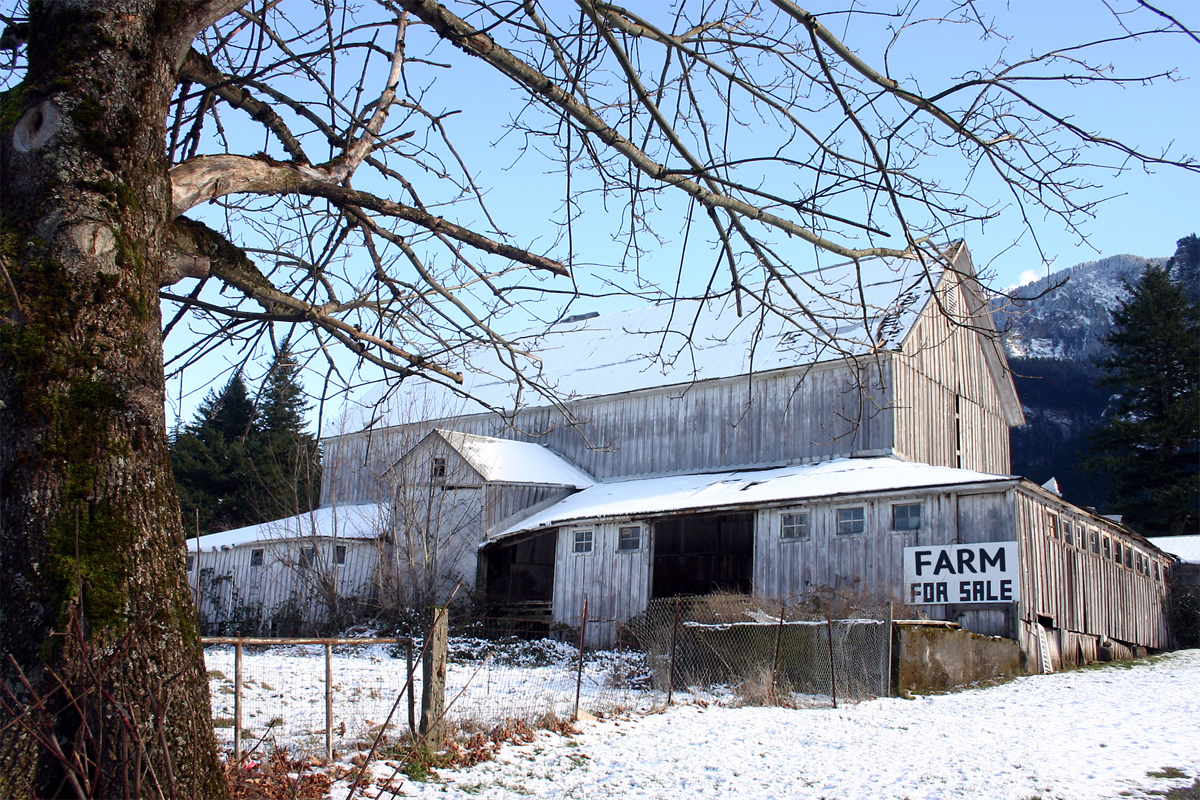 “If a mammal doesn’t produce it, it isn’t ‘milk’,” says Lisa Engelbert, one of the farmers at the sixth-generation Engelbert Farms in Nichols, New York. Engelbert is referring, somewhat wearily, to the plant-based beverages and other products made from soy, rice, nuts, and oats—she calls them “plant juices”—that currently account for 13 percent of the U.S. milk market and $1.6 billion in sales.

Alternative milk is ascending as U.S. cow milk sales are dropping—as of June 2018, they’re down by 6 percent from the previous year. The way some struggling dairy farmers see it, the popularity of alternative dairy products (one of which is now the subject of a class action lawsuit in New York) has partly contributed to dairy farmers’ own travails. Many of them have been forced to shutter their operations due to a milk glut and its attendant low prices—as of this writing, $16.33 per hundredweight (in layperson’s terms, about 11.5 gallons), considerably less than the $22 it costs to produce.

In New York State alone, 1,600 dairy farms went out of business from 2006 to 2016, with dozens more closing so far in 2018. Farmers will tell you that when they go, they take with them carbon-sequestering grazing lands best suited to that practice, critical habitat for wildlife species, rural communities dependent on the financial health of local agriculture, and the farmers themselves. In their place come development, gravel quarries, and massive commodity dairy operations that are, say the farmers, what should really alarm ecological- and health-minded consumers. 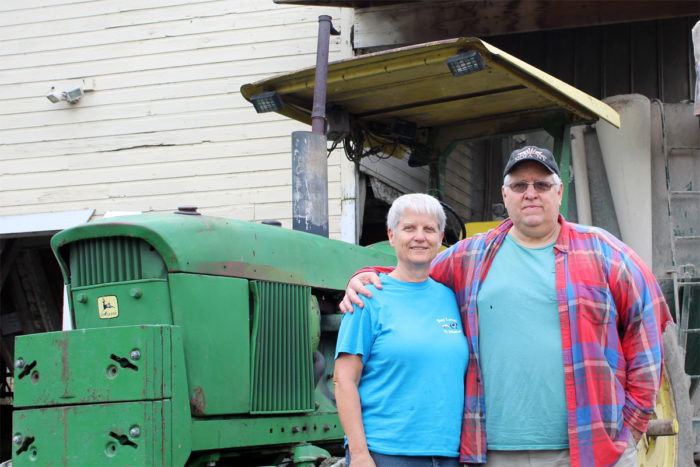 Lisa and Kevin Engelbert on the farm. Photo by Lela Nargi

The farmers know that the causes of the latest dairy crisis (which has been underway for four years and counting) are complicated, as are the solutions. Some legislators have attempted to improve the industry—New York Governor Andrew Cuomo recently announced $30 million in funds for farmland protection grants, and signed into law the well-supported Working Farm Protection Act to help keep farmland in farmers’ hands.

But a lot of Northeastern dairymen and -women are pessimistic about the prospects for meaningful changes that will allow them to survive, let alone thrive. On the federal level, they’ll point out, the farm bill expired in late September in the Senate—although as Lynn Kahn, Green Party candidate for New York’s vast dairy-centric Congressional District 21 pointed out, neither the House nor Senate version made any provisions to assist small farms.

The Trump administration’s approximately $212 million earmarked to help dairy farmers suffering the effects of the tariffs it imposed has received a tepid response, at best. National Milk Producers Federation CEO Jim Mulhern told Dairy Herd Management that the money fell “far short of addressing the losses dairy producers are experiencing.” And, says Kahn, “It’s not clear that small working dairy farmers are going to see any of that—and some of them are saying they can’t even make it till December.”

The perception among farmers is that politicians on both side of the aisle “have let them down,” tweeted Finger Lakes-based veterinarian @Archimedes2020 in September: “When they talk about developing our economy, no one really talks about helping farmers or agriculture.”

Kahn has heard a similar sentiment in her recent canvassing. “They’re really angry at both parties, and they don’t feel like they’re being listened to at all.” Politicians and candidates are speaking only with the owners of the biggest farms or the co-ops, Kahn says, “not the working-class farmers who have owned their farms for decades and generations.”

Some farmers say farmers themselves are partly to blame for the current spate of farm closures. They haven’t diversified with profitable value-added products like cheese or figured out how to expand their market—or they’ve overextended their herds and their debt beyond what can weather the next milk glut/price slump (because dairy has been here before, every decade for decades).

Third-generation dairy farmer and vice president of the New York Farm Bureau, Eric Ooms, milks 475 cows with his father and brothers at A. Ooms & Sons Dairy Farm in Valatie, N.Y. They send much of their milk to Beecher’s in Manhattan for cheese, and make extra income from selling dry shell corn to a mill. “Everyone’s in a pinch right now, but if you’re over-leveraged, you’re in trouble,” says Ooms. “I know a family where one of them got an off-farm job with healthcare—that’s how you diversify, or sell fence posts, or timber.” 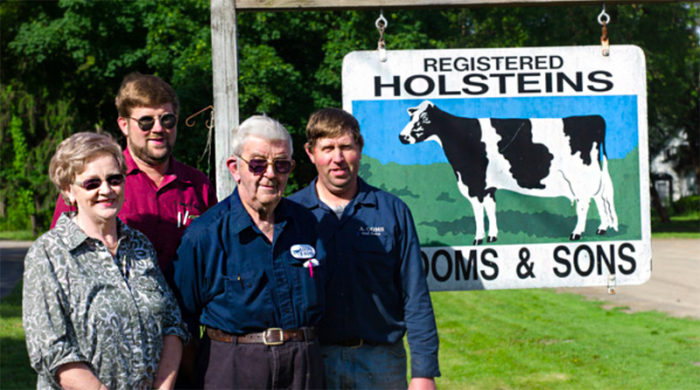 Other farmers express frustration with consumers calling for the end to animal husbandry on ethical and environmental grounds. Engelbert says that even prices for their organic milk—typically higher than conventional—are 30 percent lower than two years ago; oversupply is an issue here, too, but Engelbert says the drop is partly due to alternative milk companies marketing to formerly loyal organic milk customers, even as the U.S. Food and Drug Administration (FDA) contemplates whether or not alternative milks can be labeled “milk” at all.

Some farmers see the solution to the crisis as lying largely in consumer hands as well. Tim Tonjes took over Tonjes Farm Dairy in Callicoon, N.Y. from his father and now works its 63 cows with his sons, producing milk, cheese, and yogurt they sell at markets, their farm store, and online. Tonjes believes legislation—along the lines of the parity pricing instituted by Congress in the Agricultural Adjustment Act of 1933, which was abolished in the ‘80s—is necessary to save family dairies. But with farmers making up about 1 percent of the population, he says they’ve lost their political clout. Demands for change have to come from non-farmers because “that’s where the voting power is,” Tonjes says.

Farmers cite a slew of interconnected reasons for dairy’s woes: a drop in liquid milk consumption generally; the National School Lunch Program switching to 1 percent milk from whole milk—the skimmed fat from which is sold for other uses; surging per-cow milk production, from 540 gallons per year in 1944 to 2,753 gallons in 2017; U.S. Department of Agriculture (USDA) disinterest in their fate; a failure of policymakers to protect small farmers from low prices, exacerbated by milk cooperatives’ deductions; and a failure of small farmers to band together to lobby on their own behalf. And of course those presidential tariffs.

Nate Wilson assesses the situation more succinctly. He’s a retired farmer of 40 years who says dairying is “a calling, dumb as it may sound,” and now writes for an industry newsletter called The Milkweed. Yes, he says, a lot of these things snowballed over the years to weaken family dairy farms. But the deathblow is being delivered by the co-ops.

In the past, Wilson says, “co-ops would battle each other for market share, lowering the price to the processor till the processor bought from somebody. It was always to the detriment of the farmer.” But more recently, some small farmers say large co-ops have been making it near impossible for them to compete: insisting on all-or-nothing contracts that prohibit them from holding back some milk for value-added products or direct sales; refusing to haul small loads; and demanding costly farm upgrades, like new equipment or repaved roads to make pick-ups easier.

The way Wilson describes these tactics is reminiscent of Big Chicken’s squeeze on contract farmers. They’ve not only edged small farms out of business, they’ve bought up many smaller co-ops. As a result, says Wilson, “Dairy Farmers of America (DFA) controls one-third of all [American] milk production. And you can be sure that once they [and other big co-ops] get rid of all the smaller co-ops, they’ll turn their knives” on the next tier that have so far operated under their radar.

In response to these assertions, DFA vice president of Northeast operations, Bill Cummings, provided Civil Eats with a statement that reads in part: “Our sole purpose is to ensure stable markets for our members’ milk. We do this by paying a competitive price and…offer[ing] programs and services that make it easier and more profitable for our members to farm, including access to financing options, discounted farm supplies, health and workers’ compensation insurance, risk management tools and more.”

Holly Rippon-Butler grew up on a dairy farm in New York’s Upper Hudson Valley. She’s now land access program director at the National Young Farmers Coalition (NYFC) in Hudson, N.Y., which lobbied hard for the Working Farm Protection law. Rippon-Butler maintains that many farmers share Wilson’s sentiments but are too nervous to speak up. “They’re afraid that if their name is in print, they’ll be the first to get dropped [by the co-ops]. The fear is very real.” 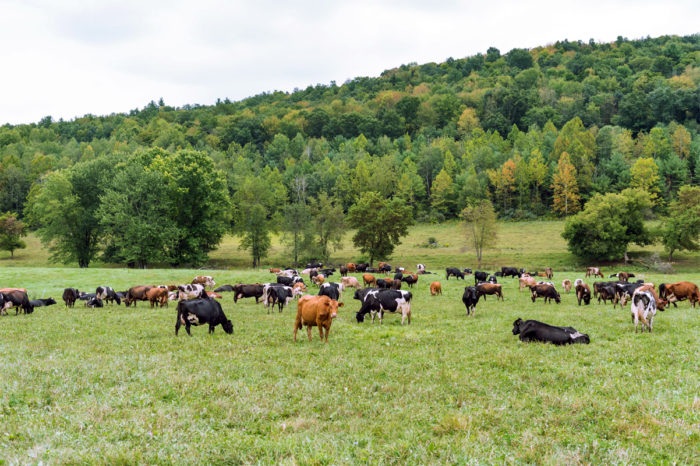 Some of Engelbert Farms’ cows. (Photo courtesy of Organic Valley)

One co-op, Massachusetts-based Agri-Mark, which makes Cabot and McCadam brand cheeses, convened a summit in Albany this summer to give industry stakeholders a voice. They also created a website where farmers and others could comment. Misguided federal bureaucracy factors high on the list of grievances. Suggested fixes include emergency funds for farmers in crisis—New York Senator Kirsten Gillibrand, who sits on the Senate’s ag committee, proposed such an amendment to the Farm Bill, which was struck down (her office didn’t respond to requests to comment for this story)—and longer-term solutions like production quotas and price restructuring.

Brenda Cochran wasn’t able to attend the summit. Nevertheless, as the president of Farm Women United (FWU), an organization with a mission to rally women farmers to save local agriculture, Cochran has been an outspoken critic of the co-ops, Agri-Mark included. Agri-Mark’s leadership, she says, “did arrange the public forum that gave interested parties a chance to come together and briefly, but not substantively, look into the situation. However, [it]…did not focus on identifying the systemic…causes of this socioeconomic crisis on dairy farms and the critical need for an immediate intervention.”

Cochran sees the source of dairy’s problems as a push for “bigger and bigger units of food production,” helped along by the co-ops, which she calls “corrupt cartels…that represent [milk] processors, not farmers.”

Cochran says some politicians have behaved admirably on farmers’ behalf, like Gillibrand and her own Pennsylvania congressman, Tom Marino, who has proposed restoring whole milk to the school lunch program; and FWU has endorsed Kahn for Congress. Otherwise, Cochran says, they “don’t give a rat’s ass what happens on small farms; they’re going to proceed with the industrialization of agriculture and globalizing the food supply.”

There’s been at least a small shift in attention to the crisis, though, as concerned organizations have begun to galvanize on behalf of dairy farmers—like the Center for Agricultural Development & Entrepreneurship (CADE) in Oneonta, N.Y. “It’s very clear from our perspective that the pricing structure and monopolies within the dairy industry are the primary problem and when you’re talking about government policy and big business, they can wipe out a certain type of farm in an instant,” says Lauren Melodia, CADE’s value chain manager. “With this most recent crisis,” she says, “we’ve been working with a loose coalition of farmers and local farm service agencies to identify advocacy strategies.”

In the meantime, the State University of New York at Cobleskill has opened a dairy plant on its campus. It’s supported by a $100,000 rural development grant that CADE received from the USDA, which will help local dairy farmers market their own value-added products—offering them a choice Melodia says will lend them “a sense of empowerment.”

Should these farmers and others be afraid of pushback from the likes of DFA? “Farmers have got to get braver” in standing up for themselves, insists Cochran. “I’m not afraid of retaliation, and I’m not going to give up my seat.”