In the Great Bear Rainforest, educator and agitator Jessie Housty reconnects the Haíłzaqv community with its food traditions.

“I want to stress that we have no idea what we are doing.”

So says ‘Cúagilákv Jessie Housty, a self-described “community agitator, mother, land-based educator, indigenist, [and] unapologetically Haíłzaqv” woman—who promptly displays all the hallmarks of someone who knows exactly what she is doing.

What Housty is doing, in a remote corner of British Columbia, Canada, is agitating, mothering, educating, and staking the ground of her traditional territory. She is a young Indigenous woman, who, with the help of her friends and family, is feeding the growth of her culture and her community.

Which is another way to say she’s gardening.

In her Haíłzaqv tongue—the name of her Indigenous nation, which, when anglicized, is called Heiltsuk—the garden she tends to is called q̓váx̌ʔás, or “place where something grows.” It, in turn, is in a place called K̓vi’aí (“gwee-ay”), a keyhole bay fringed with sandy beaches and lush temperate rainforest—in the wild heart of what’s come to be known as the Great Bear Rainforest. 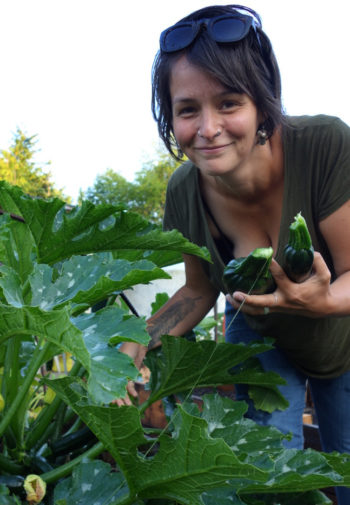 Jessie Housty harvesting for the camp kitchen; the way to kids’ hearts is through their stomachs.

K̓vi’aí (Koeye, when anglicized) is home to a remarkable Indigenous youth-science and cultural camp, run by the Qqs Projects Society, whose mandate is “to open the eyes of our children to their responsibility as stewards of our land, culture, and resources.”

As the Qqs communications director in charge of outreach, storytelling, and fundraising, Housty understands that one way to open children’s eyes is through their stomachs. So when groups of Haíłzaqv kids arrive by the boatload each week in the summer from their village of Bella Bella, two hours north of K̓vi’aí, fresh produce harvested from the q̓váx̌ʔás is on the menu. Some kids, Housty says, “aren’t used to eating salad with dinner because they don’t eat produce at home.”

A 2013 study published in the journal BC Studies found that, among British Columbia’s Indigenous populations and throughout Canada and around the world, “family diets are now overwhelmingly dominated by industrial food products, with local traditional foods playing a supplemental role.”

The study goes on to note that the 370 million indigenous people worldwide are “among those most vulnerable to food insecurity, malnutrition, and chronic diseases … (and) B.C. First Nations continue to experience shorter life expectancy, higher mortality rates, and higher rates of infant mortality than do other residents of the province.”

This pernicious “nutrition transition,” as experts call it, is exactly what Housty is trying to reverse in reconnecting Haíłzaqv children with their native foodways, as are other Indigenous food leaders operating across North America and around the world—including Navajo ranchers in Arizona, Shinnecock fishermen in New York state, and members of the Tolowa Dee-ni’ Nation in California.

And at the K̓vi’aí Lodge, which hosts and feeds not just summer campers but also visiting scientists, eco-tourists, families from Bella Bella, and volunteers from around the world, the produce from the gardens is supplemented with herbs from the Copper Garden, a meditation space within easy plucking distance of the kitchen. And then there are the berries; so many berries. 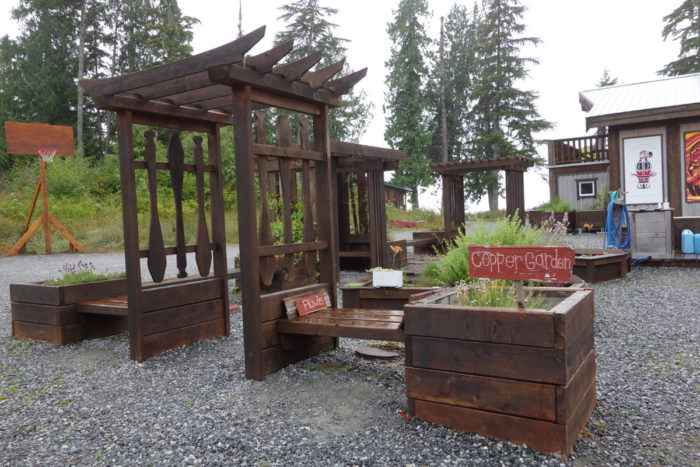 On forest trails that the kids share with grizzly bears—two Great Pyrenees dogs keep the kids and the cubs at a safe distance from each other—there are l̓qáx̌a (thimbleberries), nk̓vɫ (salal berries), k̓íbát (elderberries), ǧúláli (salmonberries), siák̓vṇaɫ (blueberries), ǧvádṃ (red huckleberries), and wíq̓ás (devil’s club). Signs in Haíłzaqv script are dotted around the gardens and along the trails, reinforcing the link between nature and culture. It is a disarmingly subtle approach to getting kids excited about plants—and about eating them. And it is past urgent that they do so.

“Jessie to me is one of the leading lights in the whole movement of reclaiming Indigenous food traditions,” says Nancy Turner, an ethnobotanist and author. “So young, energetic, and smart,” she says of Housty. “To me it’s inspiring and uplifting.”

Housty, 32, threads her way past juvenile fin whale vertebrae that frame the entrance to the garden in K̓vi’aí. Slung on her back is Magnus, her then 10-month-old son. He and his three-year-old brother Noen are Twitter and Instagram stars in the making; Housty documents and shares their adventures in food almost daily on Housty’s @heiltsukvoice Twitter account, with almost 10,000 tweets and counting. 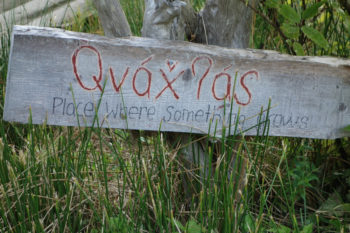 Housty says lots of people make fun of her constant use of social media, but “it’s a good community engagement tool,” she says. “It’s why so many people are making fireweed jelly, because it looks so good on Instagram.” Housty made nine different jams and jellies last year from rainforest plants and berries, with fireweed a definite fan favorite.

Housty is thrilled that the learnings from K̓vi’aí are translating back to the larger year-round community of Bella Bella (population 1,300). There, she and her team have planted a community garden right beside the dock at the main entrance to the village. Numbered beds help band members identify what’s what as they help themselves to the seasonal spoils. At the same time, she and her team routinely deliver fresh produce to homes of community elders. Village classrooms plant seeds and give the seedlings away to a growing number of families starting their own gardens.

Housty says promoting gardens in the village “is mostly to get people excited about the fact that they can play a role in their own food security”—something that’s already playing out when it comes to the marine resources that are a staple of coastal First Nations’ diets. The Haíłzaqv have been leaders in wresting back control of their marine resources, and Housty’s garden is of a piece with that re-assertion of their food sovereignty, which in turn is central to the practice of a “gift exchange” economy in which food plays a huge part. 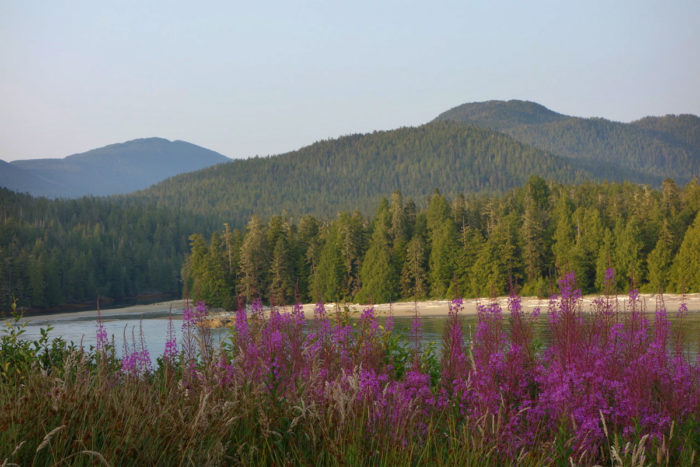 The keyhole bay at K̓vi’aí, with a fireweed fringe.

Housty dreams of the community being self-sufficient in food—and in every other aspect of economic life, for that matter—although she admits it’s slow going. Having a commercial-scale greenhouse would help, although that would take a “big, appropriate investment” that so far hasn’t materialized.

That idea is echoed by Gary Housty Jr., Jessie’s cousin and a program manager at the local hospital, who says community members suffer from a disproportionate number of chronic disease, much of which traces to their diet. “Diabetes is the big one, cardiac disease, kidney disease, and high rates of obesity,” he says. Matters aren’t helped by the fact that the once-a-week delivery of fresh food that comes off a ferry from down south often sells out by mid-week.

Back in K̓vi’aí, it is time for an expedition up to an old limestone quarry. Another of Jessie’s cousins, Ǧvu̓í Rory Housty, joins her and baby Magnus, along with Housty’s father Larry and a punt-load of kids who travel a mile or so up river (a punt is a shallow boat).

Along the way, we pass patches of sea asparagus (“amazing for arthritis,” Housty says, when crushed and put on the affected area, and good pickled and in omelettes). Farther upriver is a meadow with yarrow (“good for colds” when prepared as a tea); springbank clover (another good tea); rice root lily, Indian paintbrush, wild crab apples, and cow parsnip. The whole K̓vi’aí watershed is a huge Indigenous garden in her eyes. But she makes an important clarification. “I don’t think of myself as an ethnobotanist. I don’t study it, I practice it.”

Hiking into the forest looking for the old quarry, the kids navigate around the big spiky stems of devil’s club. (Housty says that brewed into a tea with alder bark, devil’s club is good for joint and muscle pain, mouth sores, and dental pain relief; it is also a good appetite suppressant, and “it keeps you awake at night.”) But the kids, inevitably, make a beeline to the berries. 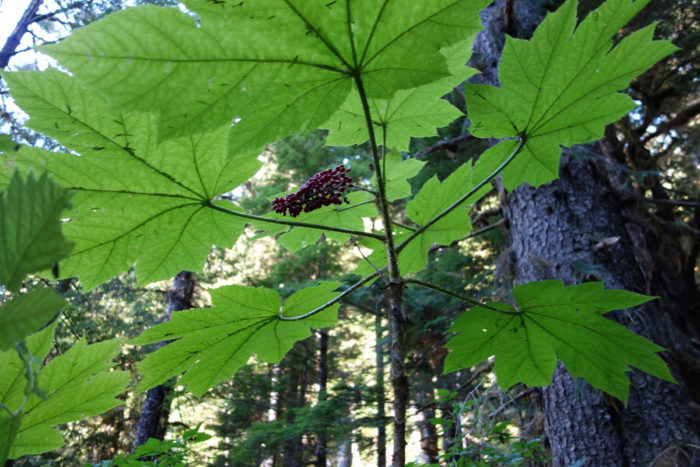 Wíq̓ás devil’s club: “It keeps you awake at night.”

Housty explains that it’s tricky to incorporate as much of the Haíłzaqv language as possible when teaching kids about plants because “there are not a lot of Haíłzaqv words for the things we are cultivating” in the produce garden. There’s no traditional word for kale, for instance—although Jessie’s cousin Rory is working on that.

An authority on traditional language, Rory relishes working with a “language authority board” of fluent Haíłzaqv speakers to help modernize the language. For example, in the absence of a word for sandwich—something the Haíłzaqv traditionally didn’t eat—they settled on pápqua, which translates as “stack two boards on one another.”

They do have words for produce that’s been around for a while: x̌tṃ́ for carrot, gvusí for potato, muq̓vc̓í for onion, yínahu for turnips. And based on English phonetics, they’ve simply made up some words along the way: h̓ábls for apples, h̓áiṇzis for oranges, klíps for grapes, chellies for cherries, and píyas for pears.

Jessie Housty reflects on the very large task ahead in reconnecting the Haíłzaqv with their native foodways. “I think we are pretty early on in terms of really influencing people’s diets,” she admits. 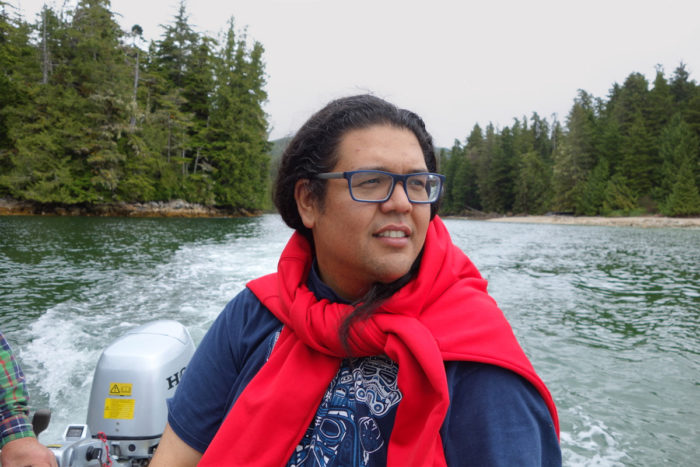 Rory Housty on the K̓vi’aí River.

It’s a generational shift, but here in the forest, surrounded by kids who bubble with interest in the yields of their lands and waters, it’s easy to share Housty’s confidence that “we are on the cusp of something big.”

Baby Magnus, meanwhile, is oblivious to all this. He’ll be talking Haíłzaqv soon enough—of that there is little doubt—but right now he’s rolling around on the forest floor with his mouth full of blueberries. Surrounded by love, and by a forest garden as old as time itself, you can’t help thinking that if Jessie Housty and the Qqs team keep up and expand their work, for Magnus, the world is his ƛ̓úx̌vƛ̓ux̌v.

Top photo: Baby Magnus gets a feed of siák̓vṇaɫ courtesy of his grandfather Larry and Jessie Housty. (All photos © Ian Gill.)