From a Family of Farmers, Paulette Jordan Hopes to Be the Nation’s First Native American Governor

The Democrat candidate for the Idaho statehouse comes from a long line of chiefs and a family of farmers and ranchers. Her platform focuses on food sovereignty, agriculture, and water. 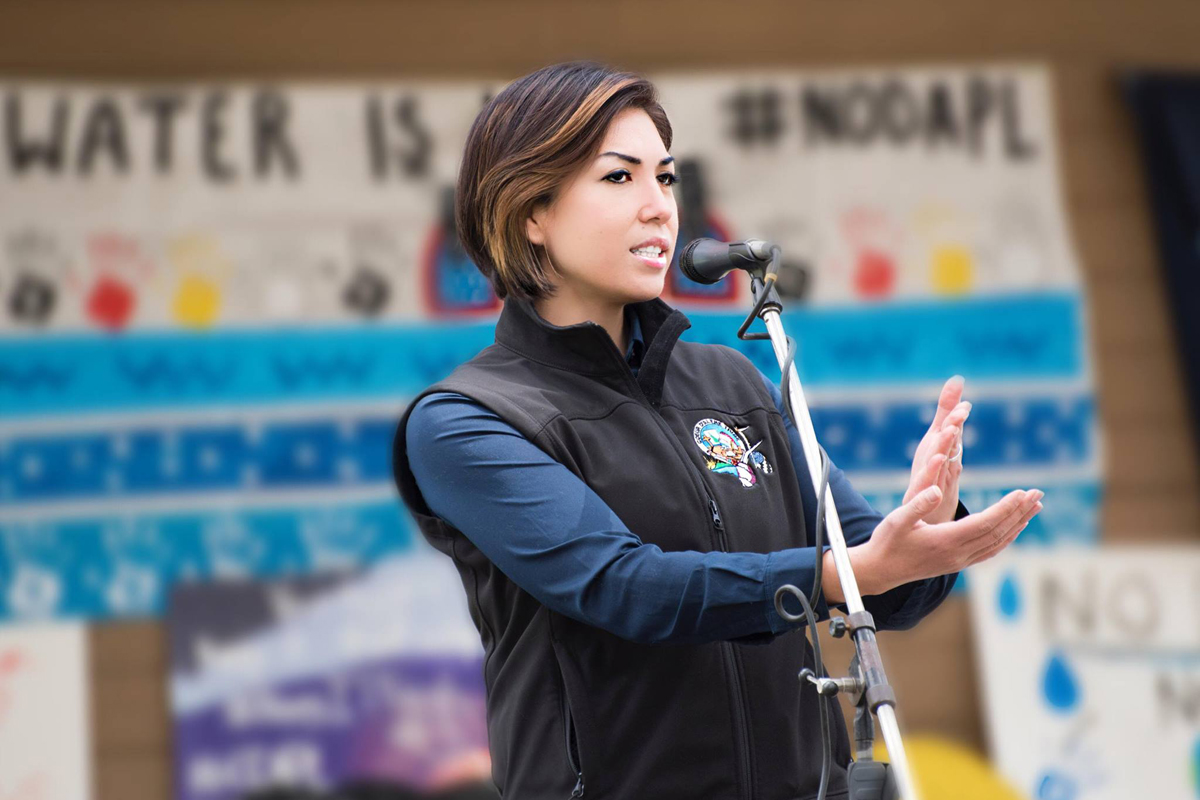 Update: On November 6, Paulette Jordan lost her campaign for governor of Idaho.

Paulette Jordan is one of many women running unlikely races this fall. As a member of the Coeur d’Alene Tribe, Jordan is seeking to be Idaho’s first woman governor and the nation’s first Native American governor. The 6-foot-tall, 38-year-old Democrat comes from a long line of chiefs on both sides, and, more recently, a family of farmers and ranchers.

Earlier this year, Jordan beat her primary opponent, multimillionaire A.J. Balukoff, by 18 percentage points. Now she’s up against 64-year-old multimillionaire Lieutenant Governor Brad Little, who was leading by 8 points in August—down from a 10-point lead in July. Jordan has been called “unorthodox” and “A breath of fresh air for the deep red state,” by multiple news outlets and brings a combination of fiscal conservatism and social liberalism to the race. 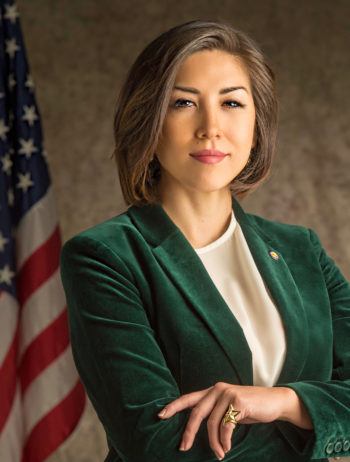 Civil Eats spoke with Jordan about her views on agribusiness, water quality, and GMOs. This interview has been lightly edited for length and clarity.

Tell me about your background growing up in a farm and ranching community. How has that informed your experience and priorities for your campaign for governor of Idaho?

My grandparents were ranchers on my father’s side, raising cattle. My grandparents on my mother’s side were farmers. They farmed soft white wheat, Kentucky bluegrass, lentils, and other pulses—a diversity of crops. It was great to be raised on diversified family farms and ranches by grandparents. They were all very hard working. They walked the fields daily, checked the crops for signs of yield, opening the heads of wheat to check for signs of development. They’re very patient people. They taught me a really different culture, a different way of life, living off the land. My grandparents were very dedicated to that life and they had to be very resilient and resourceful while at the same time very conservative in their lifestyles to make it work.

I very much value that perspective because it taught me about agriculture, sustainability, and how fragile and important the job of growing food is for our communities. It’s especially important with today’s circumstances, when the call for food sovereignty is on the rise. Corporate mergers, such as Monsanto-Bayer, that put our seed and food resources under attack, threaten the ability of farmers to save their seeds or to move into organic production. The monopolization of agribusiness corporations is working against farmers. My priorities are about the health and sustainability of farmers and food, not corporations and Big Ag.

Do you have any specific policy you would propose if you’re elected governor to address that dual need of food production and greater food sovereignty in Idaho?

Certainly. I would look to see how we can defend local governments so that they can set their own standards for chemicals used on local crops. One of my biggest priorities is supporting small farmers especially, and their independence. I want to assure that every family across our state has the opportunity to practice farming in the way they see fit. For those choosing organic farming, it’s not easy when we have pesticide laws that support this vast growth of agribusiness that isn’t healthy or sustainable over the long term.

You mentioned that local government issue, the concept of local control, a bit. Is that something you’re focused on related to the growth of the dairy industry in southern Idaho?

One of the main concerns I have for dairy is the methane and the large volume of waste that poses a serious threat to our water. Dairy waste needs to be controlled; it needs to be regulated. For these dairy farms concentrated in dense areas, people are rightfully concerned about the large volume of waste in one area. There needs to be a balance between the environment, the people in the communities, and the health and safety of the workers and the industry. It’s a very fine line, but it’s a line we can figure out.

That fine line you pointed out is often painted as a rural-urban divide. Do you see that divide in play in Idaho? And if so, are there any steps that your campaign is taking to bridge the two groups?

Coming from a farming community, I do understand what farmers and rural people go through. I think about the taxation, sometimes over-taxation, that hits farmers’ bottom lines, our pocketbooks. Policy has an impact on farmers’ costs and on our lifestyle. That’s why as governor, I would certainly protect the agricultural community in certain ways.

I’m also very mindful of what we need to do to protect our environment and our children’s future. Our children are now being impacted much more by the way our food is grown, by Monsanto and the other agribusiness corporations, because the companies are incorporating more GMOs [genetically modified organisms] into our food. The impacts of mass-produced pesticides, antibiotics, and drugs in our animals and our food is just huge. What does that mean for our children?

And how does that tie into your belief in sustainability, in environmental policy?

Take the issue of urban sprawl, or massive development on former farmlands. Smaller farmers in and around the growing cities have a hard time affording to maintain their land base. In rural areas, the problem is the fact that Big Ag tends to dominate the agricultural economy. It’s unfortunate, because there are a lot of issues being ignored. Climate change is one. We are likely to see an increase in drought in some years, for instance, because of climate change. How can we address that? How we protect our water is another. What to do with the Snake River dams is a concern. 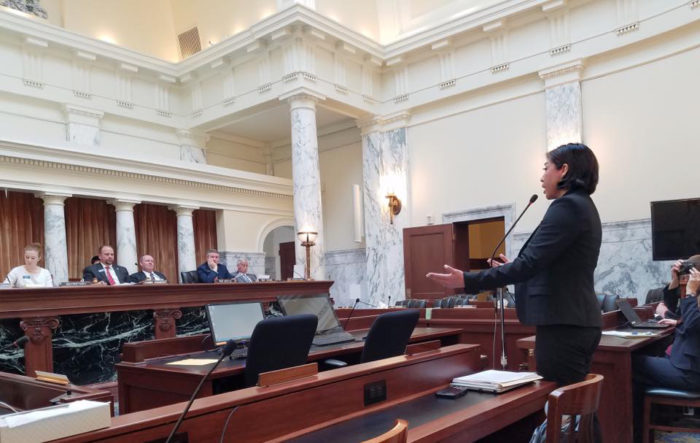 You’re a member of the Coeur d’Alene tribe. What are your priorities for tribal communities in Idaho?

I’m big on food sovereignty. I support our children learning to grow healthy foods, through school gardens for instance, to live more self-sustaining lives. The same goes with the more rural areas of Idaho, including the tribal communities around the state. I think the 4-H program, for instance, is critical in helping kids learn to grow our food, whether that’s through raising tomatoes or cattle. I grew up gardening, and it was a major component of my learning self-sufficiency. There’s also a big contrast between a healthy meal you make from your garden and fast food. When we grow food ourselves, there’s a very different taste and flavor.

What other priorities related to farm and food issues do you have in your campaign?

In a state like mine, with a proportion of our state’s GDP dependent on agriculture and agribusiness, the economy is dependent upon our overseas relations and markets. [Idaho exports dairy, wheat, sugar beets, potatoes, beef, barley, and peas.] It’s taken many years to develop a lot of those relationships, and there’s so much on the line when it comes to international trade. As governor, I’m going to be defending those existing relationships and assuring that our agriculture community is defended, that those relationships and markets are protected.

Figuring out where the trade policy is headed, that’s a mess. A lot of us are scratching our heads on that one.

I would point out, though, that while trade is in the news and is very important, my main concern is water. Protecting water quality is the number one issue. Farmers all across our state are well aware of this. We haven’t talked yet about the issue of hydraulic fracking, which is on the rise in Idaho thanks to our current governor’s [administration]. There are numerous bodies of water that have been impacted by pollution from former mines. It’s not lost on the agriculture community that we must protect our water from pollution by these industries. The health of our people is a direct result of what we grow and the quality of our water.

Update: A reader noted that while Jordan would be the first Native American governor, David Waihe’e, who is of Native Hawaiian ancestry, served as governor of Hawaii from 1986 to 1994.