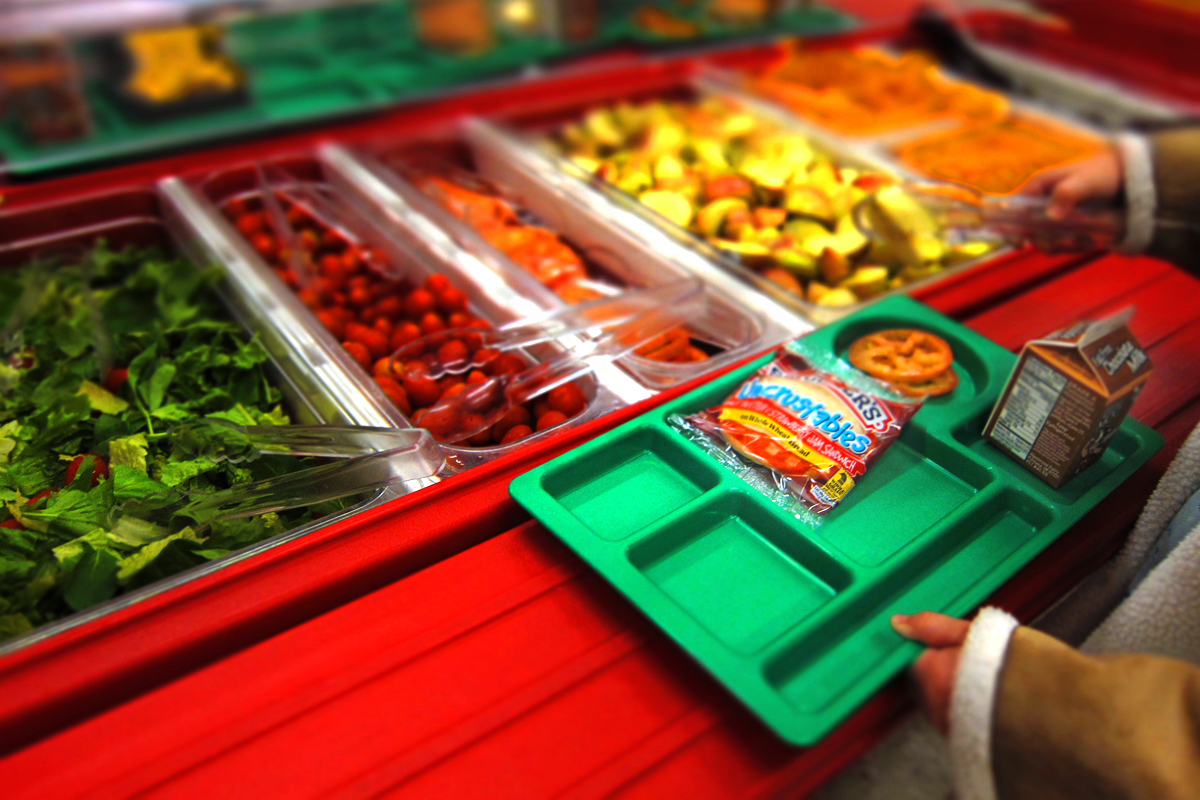 As an advocate, writer, and school food commentator (and Civil Eats contributor), Bettina Elias Siegel has spent the last eight years working on improving the quality of food served in public schools across the country.

But her activism started with the desire to change the food her children were being served at schools in the Houston Independent School District (HISD). So when she found out in late 2017 that HISD had hired Betti Wiggins, the visionary who had transformed Detroit’s school food program from one dependent on deep-fried, processed foods to one filled with fresh produce from local farms, she thought her work in the district was done.

“I felt like, ‘We’re in good hands now, I don’t have to pay attention,’” Siegel said.

Which is why she was shocked to hear that, in July, Wiggins signed an $8 million contract with Domino’s to sell its Smart Slice pizza in Houston’s middle and high schools. (The contract is set for one year and renewable for four.)

After Siegel wrote about the contract on her blog, The Lunch Tray, in early August, the Houston Chronicle picked up the piece (with a few small updates), sparking controversy both within the district and in larger circles of concerned parents and reformers.

“There are certain foods I don’t think we should be serving in schools. I don’t serve hot dogs and corn dogs; I think that’s carnival food,” Wiggins had said in a Civil Eats interview in 2015. But in 2018, she told Siegel she had to have a source of pizza on the HISD a la carte line because kids demand it, and that she is expected to run a business that doesn’t end up needing money from the district at the end of the year.

“This is a delicate balance act that we play,” she told Siegel. “I’ve got to find a way to get incremental income. That’s a shame to say.”

The big question hovering around the discussion was clear: If an esteemed advocate like Wiggins feels the need to feed students Domino’s in order to make her budget work, what does that say about the state of school food reform in 2018?

The Problem With Smart Snacks

In December 2010, President Barack Obama signed the Healthy Hunger-Free Kids Act into law. Shaped by first lady Michelle Obama’s efforts to curb childhood obesity, the bill gave the U.S. Department of Agriculture authority to set nutrition standards for all food sold in schools. The new standards called for more whole grains, less sodium, and more fresh fruit and vegetables, among other things. The law was significant because the standards applied not only to the federally reimbursable meal line but also to what school administrators call the “a la carte” line, in which students can buy individual meal items and snacks including packaged junk foods like potato chips.

In response to the Act, food companies rushed to reformulate their products to meet the Smart Snacks standards. Frito-Lay debuted a Smart Snack version of its Flamin’ Hot Cheetos with less fat and salt and more whole grains than the original. And Domino’s created Smart Slice, pizza made with 1/3 less salt, reduced-fat cheese, and 51 percent Ultragrain White Whole Wheat Flour. Pop-Tarts, Doritos, and Rice Krispies Treats also all come in Smart Snack variations sold in schools.

While these foods technically meet the federal nutrition standards, many experts still argue they’re nowhere near “healthy.” Additionally, advocates say getting kids hooked on big processed food brands is an even bigger issue than the quantity of salt and sugar.

“If your goal is to get kids started on a lifetime of healthy food choices, this is indeed a problem in two ways: It encourages kids to eat fast food, and it points out the absurdity of school nutrition standards, which can be so easily gamed,” said renowned author and nutrition and food studies professor Marion Nestle.

“What’s problematic is you add that layer of branding that’s particularly appealing to children … and the kids are not told this is not the same Domino’s pizza [they’re used to], so to them, it just looks like the school is serving them Domino’s. That sends a very troubling message—that this is okay to eat for lunch,” Siegel said. “We’re undermining the spirit of the Act, which was in part to educate children about what healthy food looks like.”

In a statement provided to Civil Eats, Wiggins explained that schools offer pizza, chips, and other a la carte menu items to middle and high school students because they understand that not all students opt to eat what is available on the cafeteria line. “Offering these varied options, many that are recognizable brands, allows students who traditionally pass on the standard menu to have access to a healthier version of their favorite snacks,” Wiggins said in the statement.

Additionally, she said, there’s a financial component. “Money collected from a la carte sales stays in Nutrition Services, providing the department with the funding needed to continue developing healthy, nutritious options for our students,” she explained.

That distinction is key, because most districts don’t allocate significant funding from what is called the “general fund” to school food programs. That means food service departments usually need to make their own money beyond what the USDA reimburses, explained school food reformer Ann Cooper, who is currently the food service director at Boulder Valley School District and runs the Chef Ann Foundation and a national consulting company devoted to school food reform.

“There’s no other department in a school district where they’re not supported from the general fund,” she said, offering a comparison: While buses aren’t “necessary” in the same way that teachers or textbooks are when it comes to educating children, many districts allocate millions of dollars to busing because ensuring children get to school each day is prioritized. “You could make a case that you can’t educate kids unless you get them to the school,” she said. “And I will make a case that you can’t educate kids that are malnourished or hungry—they can’t learn, they can’t think.”

Given the lack of money allocated from district funds and low federal reimbursement rates, those actually working with school food budgets are not surprised when compromises are made.

“There’s an expectation that the school food system is run as a business,” added Cecily Upton, the co-founder of FoodCorps, an organization that works on both nutrition education and school food programs across the country. “It’s the only part of the school system set up like a business and a place where districts are expected to make a profit. [Food service directors] are strategizing about how can they do a little better in one place and where can they make sacrifices to make those changes possible.”

Part of that business is getting students to actually eat the food, said Bertrand Weber, who has presided over a rapid transformation of the Minneapolis Public Schools (MPS) food program, installing salad bars, switching to scratch cooking, and partnering with local farms. School food metrics are often measured in “participation,” and this gives companies like Domino’s a leg up when it comes to bids, since the company can use the fact that kids want to eat Domino’s pizza as a selling point. The evidence is front and center on the product’s homepage: “80 percent of our customers report increased participation with Domino’s Smart Slice.”

The Challenge of Reform

In Minneapolis, however, Weber has been able to successfully eliminate selling processed foods made by outside vendors in schools for two reasons.

First, he said, he benefits from the fact that 60 percent of the district qualifies for free or reduced-price meals. This allows him to take advantage of more federal and state programs and subsidies compared to wealthier districts.

Second, he’s cut costs primarily by switching to scratch cooking, since unprocessed ingredients are much cheaper, even after considering the higher cost of labor.

Scratch cooking is at the base of Cooper’s reforms, too. She cut food costs by switching to buying whole foods and applied a smart solution to the associated higher labor costs: centralized production. “If you’re trying to cook in every school, payroll costs are high,” she said. In Boulder, where the district includes more than 50 schools, she transitioned to having meals prepared and cooked in just three kitchens. She’s currently working with the district to build a separate facility that will further consolidate the cooking to one central location.

Weber, on the other hand, has worked with MPS to allocate significant capital into building kitchens in schools that didn’t have them. He has gone from zero kitchens five years ago to 36 today, and he expects to have 48 by next year. “I personally was successful in elevating the importance of quality food and a quality eating environment with the school board and community,” he said.

In communities where residents or leadership do not see healthy cooking and from-scratch food as priorities, that same effort might hit a brick wall. Indeed, when Siegel initially heard parents in Houston were in an uproar over the Domino’s contract, she thought it was for the same reasons she was, she said. But in fact, they were concerned that $8 million was going to food services when the district needed more money for teachers and other programs.

Still, the success of programs like Brigaid and Wellness in the Schools, in which chefs revamp school food programs in exchange for a fee, speaks to the idea that when political and community will exist, schools can move money around to pay for better food. (Both programs do, however, support their work through outside fundraising as well—and cut costs through scratch cooking with whole foods.)

“I love what they’re doing, but there’s always going to be a limited number of those programs compared to the number of school districts in this country,” Siegel said. “They still feel like stopgap measures that create this patchwork of haves and have-nots.”

Which speaks to what these nitty-gritty conversations about budgeting and compromise say about the state of school food today: Despite Michelle Obama’s reforms, the people doing the work say there is still a long way to go, not only to secure adequate resources, but also to convince governments and districts that healthy food should be an educational priority—a preliminary step that ultimately leads the way toward securing resources for healthy school food.

“We need to reframe the thinking. School food should be considered just as important as English, math, and science. The kids can’t learn if they’re not well-fed,” Cooper said. “If we don’t change the systems, we’re going to continuously see school food directors forced into serving food they’d rather not or cutting deals they’d rather not because they don’t have the money they need.”