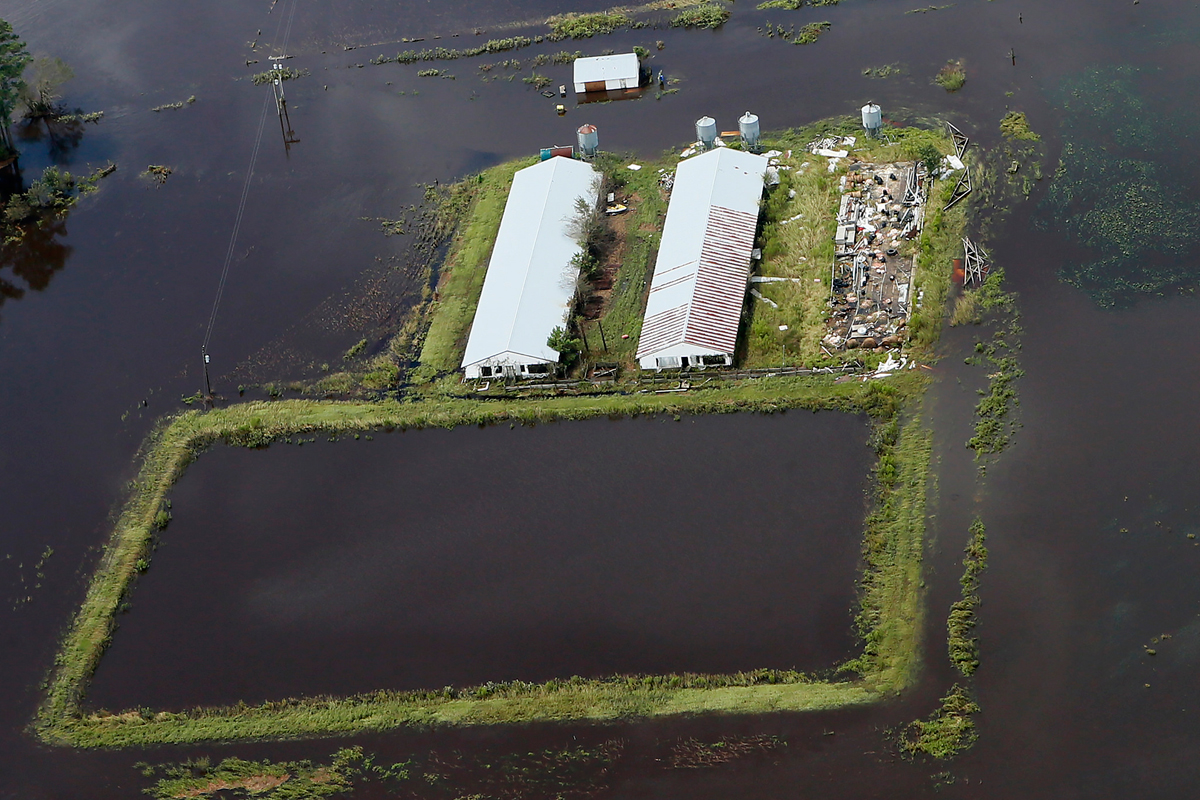 Farmers and farm advocates in the Carolinas are beginning to tally the full scope of damages from Hurricane Florence. Over the course of three days, 3.4 million poultry and 5,500 pigs drowned, and countless acres of cotton, tobacco, peanuts, and sweet potatoes were damaged or ruined. As of Wednesday, the USDA estimates that North Carolina growers lost at least $1.1 billion worth of farm products.

This was the lesson last year from southwest Texas after Hurricane Harvey destroyed crops and killed livestock across the region.

Leslie Marchand and her husband raise pasture-based poultry and pork an hour west of Houston, and Marchand serves as the southwest regional representative for the Texas Organic Farmers and Gardeners Association (TOFGA). “We lost over 100 egg-laying hens,” Marchand said. “You think about the loss of the animal itself, the loss of revenue from the eggs that those hens would produce for the rest of their life, and then having to replace them … it’s a long-term impact.”

Marchand and her husband applied for aid through the livestock indemnity program, a federal program introduced in 2008 and designed to pay farmers who lose livestock in natural disasters. Marchand says she did end up receiving compensation, but that the total did not come close to covering her actual losses in livestock and time.

Because the livestock indemnity program reimburses farmers for a fixed amount per animal, Marchand received the same payment per pig or chicken as a large-scale conventional farm, even though her animals cost far more to raise.

“Part of the challenge is that the [livestock repayment] amount is assessed by the wholesale conventional price,” says Scott Marlow, Senior Policy Specialist for the Rural Advancement Foundation International-USA. “For folks who are selling into higher value markets or selling cut meat, that price is not going to be anywhere near what they would have gotten.”

The federal crop insurance program is similarly geared towards the largest commodity producers. Currently, the top 1 percent of farms-by-sale receive 20 percent of all crop insurance subsidies, more than all farms making under $350,000 cash income, combined.

Crop insurance plans rely on yield history to predict the value of a harvest and the chance it will fail. Historic yields and risks vary by region, so insurance agents write different plans depending on location. The largest commodity crops have the most developed plans because insurers have much more information on past performance. In 2015 and 2016, 90 percent of all crop insurance premiums were spent on covering just the 10 most common crops.

Farmers who grow specialty or organic crops may have to settle for lower levels of coverage or no coverage at all. For instance, a farmer can get apple insurance in Missouri or Minnesota, but not Kansas or Iowa. Even when coverage exists, farmers need a unique plan for each of their crops, making it costly and complicated for diverse farms to get meaningful coverage. There’s a “complete lack of support for small-diversified farms,” says Marchand.

In recent years, the USDA Risk Management Agency has tried to increase disaster coverage for diverse farms through a new federal insurance plan called Whole Farm Revenue Protection. Introduced in the 2014 Farm Bill, this plan reimburses farmers based on their overall expected revenue, making it easier to reimburse specialty and organic farms for the full value of their higher-cost products, including livestock.

“Whole farm revenue crop insurance incentivizes diversification of income and can cover products at the farmer’s cost,” says Marlow. “That’s a very important thing for any farmers who are selling into higher value markets.”

The total number of Whole Farm Revenue policies grew from 1,127 in 2015 to 2,543 in 2018, but they still represent less than two percent of all crop insurance liabilities. Studies by the Center for Rural Affairs and the Rural Advancement Foundation suggest that the biggest barriers to enrollment are recordkeeping requirements and general unfamiliarity with the program among farmers and insurance agents.

Though Whole Farm Revenue policies are technically available in all states, the popularity differs greatly by region. “The insurance companies here in Texas don’t want to write it,” says Robert Magianni, Texas Sustainable Ag Specialist for the National Center for Appropriate Technology. “We don’t know any horticulture folks in the whole state of Texas who have it.”

By contrast, at least 100 farmers in North Carolina purchased Whole Farm coverage. “Obviously, just like people’s car insurance or your health insurance, it’s not going to make them whole,” says Marlow. Insured farms are “still losing, just not nearly as much.”

Photos CC-licensed by the Waterkeeper Alliance.