Amidst Keystone XL Fight, Nebraska Farmers Give 10 Acres Back to the Ponca Nation

In addition to deepening an unlikely bond, the gift from Art and Helen Tanderup could help protect the land and drive a wedge into TransCanada’s plans for the pipeline. 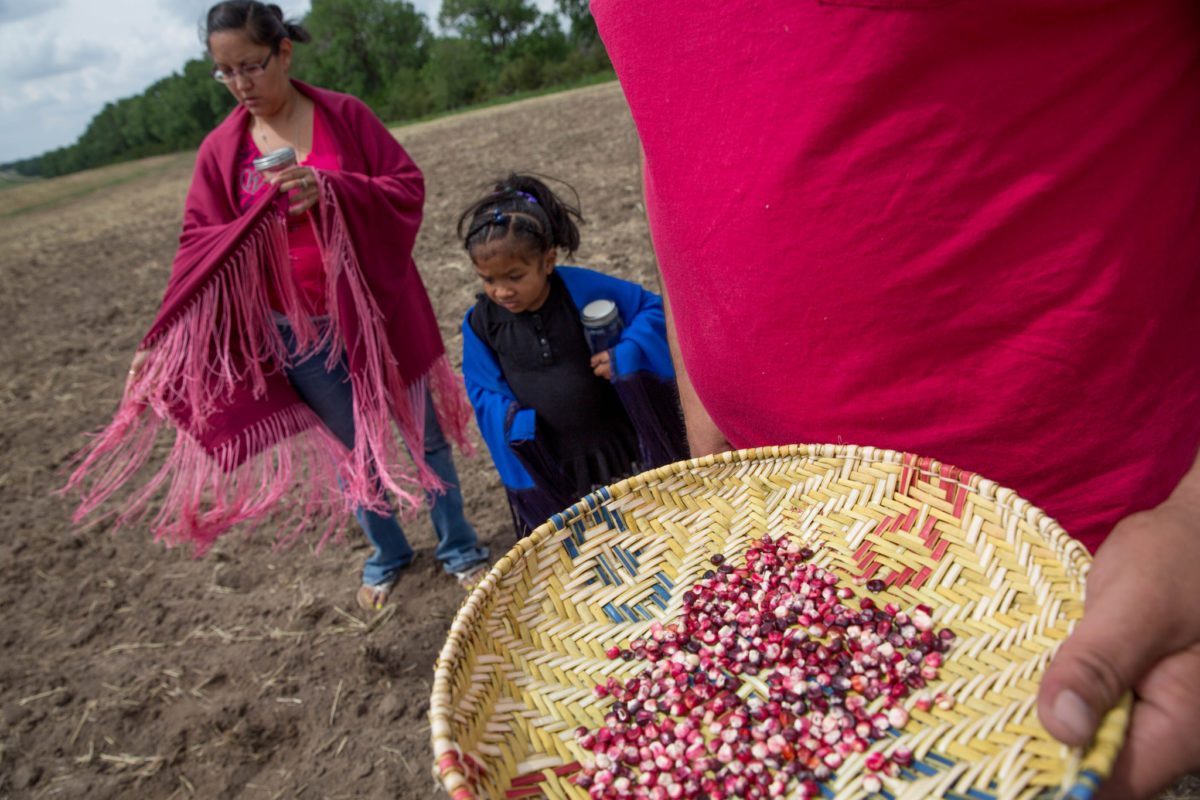 A few weeks ago, officials from the TransCanada Corporation drove two sets of wooden stakes, each fastened with about a yard of bright orange flagging tape, into the ground along two sides of Art Tanderup’s farm.

Art and his wife Helen can rattle off an impressively long list of anti-Keystone efforts, including hosting a high-profile Willie Nelson and Neil Young concert in 2014 and multiple collaborations with crop artist John Quigley that have received international media attention. And while they and many other land-owners-turned-activists celebrated success in 2015, when the Obama Administration put a temporary halt to the pipeline, they’ve been gearing up for another fight since President Trump signed an executive order that put the pipeline back on the table in 2017. That said, several other factors are keeping the construction at bay—for now.

A federal judge in Montana ruled in August that the U.S. State Department must do a thorough environmental review of the proposed route. And a group of Nebraska landowners have filed an appeal with the state’s Public Service Commission for approval of the route that has advanced to the Nebraska Supreme court. 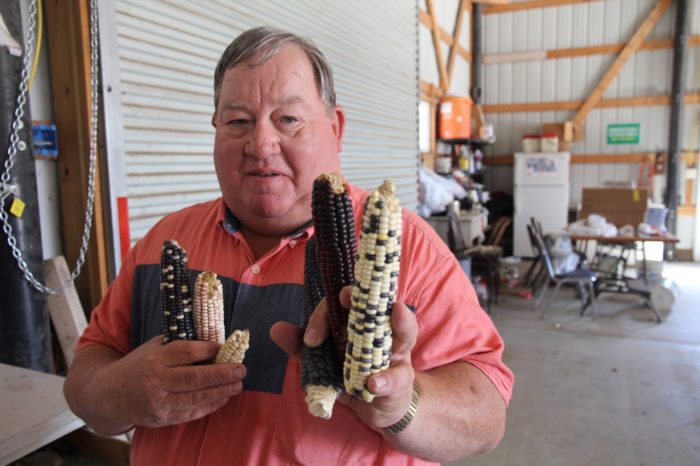 Art Tanderup displays several traditional varieties of corn he has grown on his farm in the last five years.

Tanderup also has something else up his sleeve. Just 100 feet behind the spot where the oil company put the stakes sits a thin strip of land planted with blue corn. The land was until recently part of Tanderup’s 160-acre corn, soy, and rye operation. But this June, Art and Helen opted to give 10 acres back to the Ponca Tribe, the land’s original occupants.

Other Native American tribes have played key roles in fighting the Keystone XL pipeline over the years, but the Ponca people don’t own land on the pathway. Tanderup has ensured that that will shift. “This gives them a voice,” he says

It’s hard to say whether transfer of land will drive a real wedge into TransCanada’s plans. (The Cheyenne River Sioux Tribe and the Yankton Sioux Tribe filed an appeal with a group of South Dakota farmers earlier this year that was overturned in June.) But it could create one more roadblock in an ongoing effort to stall the game. 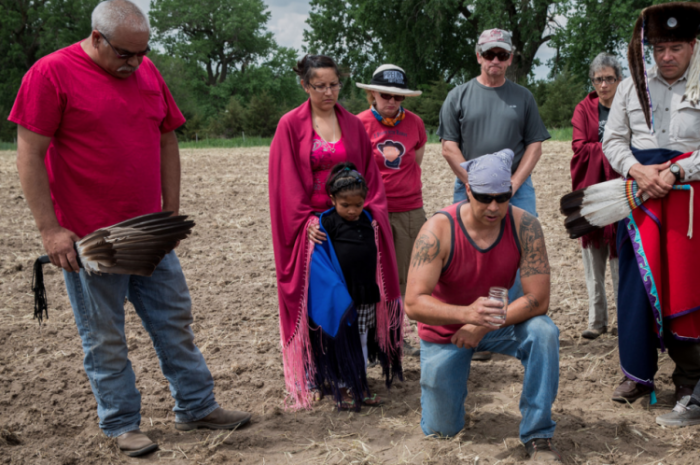 “We want to protect this land. We don’t want to see a pipeline go through,” Larry Wright Jr., the chairman of the Ponca Tribe of Nebraska told the Omaha World Herald in June, after the land was gifted to the tribe in a small ceremony. “If this adds another layer (of opposition) to that issue, we’re happy to be part of that.”

For the Tanderups, however, the gift is much more than a power move. Their property lies right on the Ponca Trail of Tears, the path Chief Standing Bear led his people on as they were forced by the federal government to flee to Oklahoma in 1877. (The Ponca Nation population of roughly 4,200 people is now split between the two states.) The full weight of this history began to really sink in for Tanderup when the farmers began meeting with Native people and formed the Cowboy-Indian Alliance in the area several years back to strategize against TransCanada.

Tanderup says his empathy for the Ponca tribe really began to grow when he and Helen hosted a spirit camp that brought together farmers, ranchers, and Native people from all along the path of the pipeline in 2013.

“We had representatives from about eight different tribal nations there. It was November and we’d had six or seven inches of snow. So we spent a lot of time at the sacred fire and then we had a teepee and we’d spend time in there. We kept the fire going 24/7,” Tanderup recalls.

Mekasi Camp-Horinek, an activist and leader from the Ponca tribe of Oklahoma, attended the spirit camp with some hesitation. Camp-Horinek’s great-grandfather had traversed the land the farm still stands on as he walked along the Trail of Tears as an eight-year-old boy, and he hadn’t had much prior experience with the farmers in the region.

“It was really foreign to me to be engaged in that type of discussion with people that, up until that point, you might say were on opposite sides of the fence,” he recalls. But a shared interest in protecting the land drove Camp-Horinek and others to strategize together.

“Everybody was throwing out ideas about ways to combat this black snake that’s threatening our way of life. And I received a divine message,” says Camp-Horinek. “The spirit talked to me about bringing our ancestral corn back to our ancestral homeland.”

In the Ponca creation story, corn was one of the first gifts given to the people by the Creator. It is at once sustenance, medicine, and symbol.

“We decided to bring the corn back to the Ponca Nation, to our ancestral homeland,” recalls Camp-Horinek. “We felt that it would stand for us at the times when we weren’t there, that it would sink its roots into the soil and protect the land.”

Finding the corn itself wasn’t easy, but eventually Amos Hinton, the director of agriculture for the Ponca Tribe of Oklahoma, acquired some red corn seeds that had been wrapped up in a medicine bundle for 137 years. 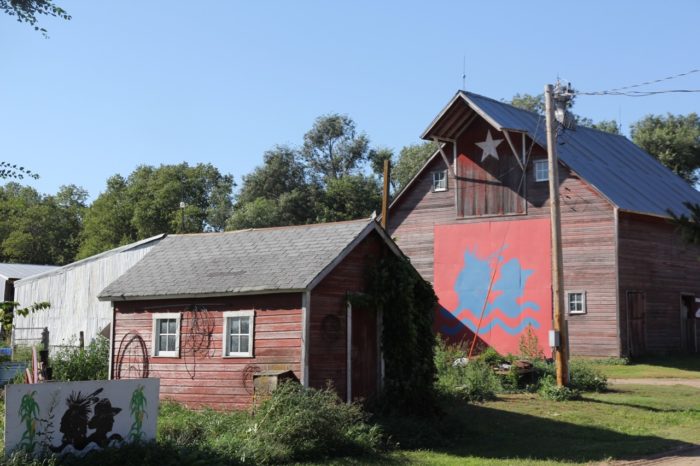 Signs commemorating a meeting of the Cowboy and Indian Alliance on the Tanderups’ farm in 2015. (Photo by Twilight Greenaway.)

Corn, like all seeds, often fails to germinate once its reached a certain age. So that first year, when the Tanderups and a number of Ponca tribal members gathered to hand-plant the corn on the plot Art has set aside, they put in three other native varieties alongside the red corn. To Art’s surprise, he says, “most of it grew.” And when they harvested it, the Ponca people took the sacred red corn seeds back to Oklahoma and the next year they planted 80 acres of it. The effort has begun the process of resurrecting a lost crop and bringing back a highly nutritious food for a group of people that—like the bulk of the Native American populations—suffer from diet-related illnesses caused by a consistent lack of nutrient-dense foods.

After they planted the corn, Tanderup and Camp-Horinek attempted to register the Ponca corn with agriculture officials in the county, who then passed it along to the state and eventually to the U.S. Department of Agriculture (USDA). “About six months later we got a letter back from the USDA registering and our corn as Sacred Ponca corn; that was a small victory for us,” says Camp-Horinek. The hope was that the land could be protected as a sacred site under the American Indian Religious Freedom Act.

For the last five years, the Tanderups and the Ponca people have continued to meet and plant traditional varieties of corn in the same place.

And when the threat of the pipeline returned two years ago, and the very real possibility of eminent domain came up, Camp-Horinek says he and Tanderup returned to the idea of bringing the tribe’s power to bear in the discussion.

“As a sovereign nation, we have the ability to create our own laws and bylaws and we have a little bit more strength than an individual,” says the tribal leader. “We talked about how we’re still able to claim ownership of some of the land where our ancestors are buried, we would be able to protect them under our sovereignty, and protect the farmland,” Camp-Horinek recalls.

And yet, Tanderup also insists that the power associated with deeding the land to the Ponca is only part of the story.

“People ask: ‘Did you [hand over the land] just because of the pipeline?’ And I tell them no,” says Tanderup. “With the relationships that we’ve built over the last four-and-a-half years, this is family to me. It’s just like giving the land to a family member.” 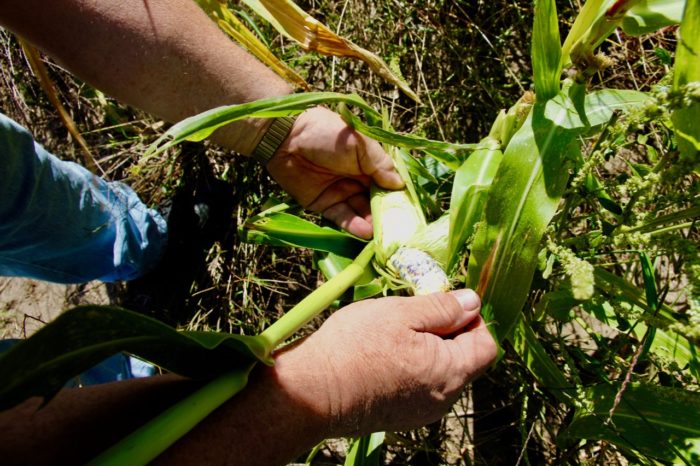 Traditional blue corn growing on the land the Tanderups recently gave to the Ponca Nation. (Photo by Twilight Greenaway.)

Neither of the Tanderup’s children are in a position to take over the land, “so that also played into our decision to give it back to the Ponca,” says Art. He adds that they haven’t ruled out the possibility of handing more land over to the tribe down the road. (Their lack of a succession plan has also kept the Tanderups from transitioning the farm to a more regenerative model, although they practice no-till farming, plant cover crops, and rely on solar energy to fuel most of the farm.)

The Tanderups’ farm lies near the base of the Nebraska Sandhills, very close to the heart of the massive Ogallala Aquifer, which supplies groundwater for most of the semiarid Great Plains. Groundwater irrigation makes it possible to produce a range of crops in the area and farms like the Tanderups’ have become famous for their giant green circles of corn, wheat, and hay—thanks to center pivot irrigation.

The region’s sandy soil would also make it especially vulnerable to damage from pipeline leaks like the one that spilled 9,700 barrels of oil into the topsoil in South Dakota in November 2017.

For this reason, Tanderup says it’s no coincidence that most of the resistance from land owners along the proposed path has come from people in the Sandhill region. “Ninety percent of the people on the preferred route have signed on,” he says. And yet, most (96 percent) of the people who haven’t signed are in Antelope County, where the Tanderups live and farm, and neighboring Holt County.

“The soil is sand and the groundwater is close to the surface,” says Tanderup. If a leak springs, oil and chemicals would head directly into the aquifer, and into farm irrigation, where it might remain invisible for some time. “Then it would end up in our corn and soy, which is fed to livestock, so it might be a while before it was detected in the food chain,” he says. He then points to a neighboring farm that produces, popcorn, peanuts, and dried beans. “That’s even riskier because it goes straight to the consumer.” 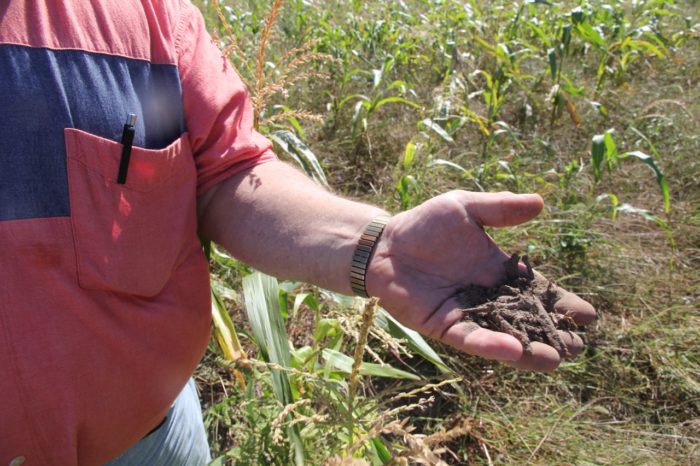 The soil on the Tanderups’ farm is mostly sand, making the area especially prone to water pollution in the event of a pipeline leak. (Photo by Twilight Greenaway.)

In order to avoid cutting straight through the Tanderups’ living room, Art says the pipeline would have to be diverted, meaning it would have four curves in a half-mile. “It’s an accident waiting to happen,” he says. Bending half-inch pipe could weaken it and, at 1,500 pounds of pressure, he says oil from the tar sands region in Canada will likely have a sandblasting effect that could wear away such a thin pipe surprisingly fast.

If a spill did occur, he added, “you can’t clean this aquifer up.” The surface water in the county, he adds, is already in bad shape. Tanderup can point to three large hog barns within a few miles of his land. “The nitrate level is already around 21 ppm”—more than twice the U.S. Environment Protection Agency’s limit of 10 parts per million.

For now, the Tanderups are preparing for the next event on the farm—the harvest of this year’s traditional blue corn, which will be done by hand on October 6th.

On a Wednesday in early September, Art bent down to examine the corn’s progress, peeling back the husks on a small ear to reveal about 10 rows of stubby, marbled azure kernels.

Then, after standing up, he proceeded to point out a row of mature trees running along the edge of the land where the pipeline is planned. “Daryl Hannah has promised to sit in that cottonwood tree if it comes to it,” he said. “But I sure hope it doesn’t.”