A lesser-known provision in the House farm bill would prevent cities and counties from setting their own rules about pesticides on public land. And it would reverse current bans in 155 communities. 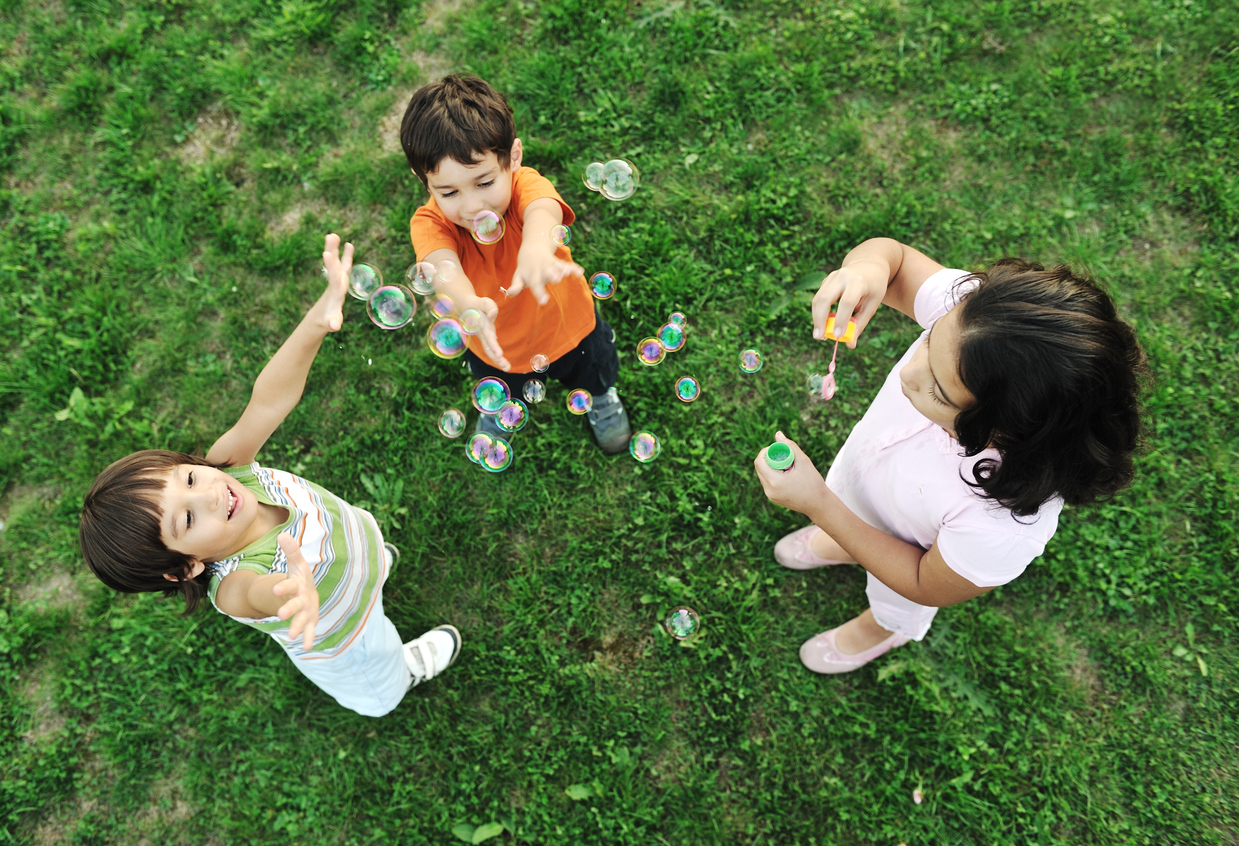 Update: The final version of the 2018 Farm Bill, released late in the evening on December 10, has removed the pesticide preemption language from the text.

When Julie Taddeo moved to Takoma Park, Maryland, a progressive suburb outside of Washington D.C., and saw ubiquitous yellow flags marking the places where pesticide had recently been sprayed, she was surprised. “Everyone’s a treehugger here in, the Berkeley of the East,” she says. The warnings, which swarmed the lawns of homes and apartment buildings, playing fields, public parks, hospital grounds—and even school bus stops, seemed incongruous.

Concerned about her young daughter and the emerging science linking childhood pesticide exposure to pediatric cancer, asthma, and behavioral problems, Taddeo teamed up with a neighbor whose son suffered from asthma. The two began working with city council members to craft a law restricting the cosmetic use of pesticides on lawns on public and private property.

Modeled on an Ontario law, Takoma Park’s Safe Grow Act passed in 2013, and it spurred an outpouring of interest across Montgomery County. “Moms started reaching out to us with their stories,” recalls Taddeo. “One said, ‘My son has a brain tumor and his doctor is convinced that this particular tumor was caused by over exposure to certain pesticides.’”

A group of residents founded Safe Grow Montgomery, an umbrella organization that quickly mushroomed to more than 40 environmental and health organizations, and worked to pass the 2015 Healthy Lawns Act, a county-wide version of Takoma Park’s law. It was the first such law in the nation to restrict pesticides for non-essential use at the county level. (Non-essential means exemptions are allowed for control of invasive pests or human health risks.)

But victory was short-lived. “When one town does it, it’s not a big deal,” says Taddeo. “But when a county tries to do it and you’re a million people, this is when the big guns come out and try to squash it.”

A lawsuit, led by the Maryland Farm Bureau, a non-governmental organization that represents farm interests, now threatens the private sector portion of the law. The battle—and others like it around the nation—may be moot however, if a provision tucked deep in the 748-page House version of the 2018 Farm Bill becomes law.

Section 9101 of the House farm bill would allow the federal government to preempt local governments from setting their own standards for pesticides. And Montgomery County is one of 155 such localities across the nation that could see its pesticide laws stripped away, according to an interactive map published today by the nonprofit advocacy groups Beyond Pesticides and Environmental Working Group (EWG).

Sarasota, Florida; Portland, Maine; Wichita, Kansas; Douglas County, Minnesota; and many jurisdictions in California are among the localities that have moved to restrict pesticide use, largely in public places such as parks, playing fields, and school grounds. Fifty-eight of these communities have set specific restrictions for glyphosate, the main ingredient in Monsanto’s controversial weed killer, Roundup, which has been linked to cancer and generated thousands of lawsuits.

Economics are clearly at play as pesticide use by localities is not insignificant. Carey Gillam, the author of Whitewash: The Story of a Weed Killer, Cancer, and the Corruption of Science, cites an internal memo from Monsanto that lays out why the company cannot afford to lose business from school districts. “It’s much smaller than agriculture but significant enough that they don’t want to lose it,” Gillam told Civil Eats.

The U.S. Environmental Protection Agency’s (EPA) data shows that agriculture represented about two-thirds of the $13.8 billion in pesticide sales in the U.S., in 2012. Government, private, and community use accounted for about 10 percent. The remainder was for homes and gardens.

The farm bill conference committee begins meeting today to reconcile the House and Senate versions of the bill. The Senate bill does not contain the community preemption provision and groups like EWG and Beyond Pesticides are working to keep it out of the final bill.

“This provision has nothing to do with farming or food,” says Scott Faber, vice president of government affairs at EWG. “It’s presumably an effort by the pesticide industry to punish those communities that dare to decide for themselves whether their kids should roll around in Roundup.”

And communities have cause for concern. A number of studies, including one long-term study from the University of California, has documented children’s particular vulnerabilities to pesticide exposure. And, in August, a former school district groundskeeper, Dewayne Johnson, was awarded $289 million for damages related to the non-Hodgkin’s lymphoma he incurred after repeated exposure to Roundup, while 8,000 other cases await court dates.

The preemption provision in the farm bill would overturn decades of Supreme Court precedent, established by the 1991 case, Wisconsin Pub. Intervenor vs. Mortier, which allowed states to set laws that are stricter than federal law.

Drew Toher, community resource and policy director at Beyond Pesticides, says the vast majority of the local policies are not related to agriculture, but are focused on “protecting water quality, protecting kids’ health around playgrounds and public spaces, or protecting pollinators from toxic pesticides in the environment.”

Last week, more than 100 U.S. representatives also voiced their opposition to Section 9101, among other farm bill provisions, in a letter to Rep. Conaway, Chair of the House Agriculture Committee.

Who’s Behind the Provision?

Opponents say that the pesticide industry is pushing for the provision.

“Big agriculture interests have spent millions of dollars over the past few decades fighting against federal protections from toxic pesticides. Now these same interests are trying to use the farm bill to undermine safeguards put in place by state and local governments,” said Representative Earl Blumenauer (D-Oregon), one of the signatories to the letter, in an email.

Faber notes that Monsanto (soon to be Bayer), Dow, and CropLife America, the pesticide industry trade association, in particular have all disclosed that they’ve lobbied on pesticide provisions in the farm bill in their lobbying records, though he can’t say whether they’ve had a role in crafting section 9101.

Pesticide companies want to “stymie a growing national grassroots movement that’s encouraging alternatives to their products because these policies don’t just take away a product, they encourage safer management practices and organic systems approaches to landscape management that effectively replace their toxic chemicals with practices that are more sustainable,” says Toher.

In Montgomery County, several lawn care companies, and Responsible Industry for a Sound Environment (RISE), a national trade association representing a range of companies that work with pesticides, are parties to the lawsuit against the Healthy Lawns Act, but, “the biggest opponent is the Farm Bureau,” says Taddeo. Their spokespeople call it a “slippery slope,” she says.

Colby Ferguson, director of government relations for the Maryland Farm Bureau, says that while the bill doesn’t touch agriculture today, “that’s next week’s bill.” The Farm Bureau is also concerned, he said, that if the vast majority of the county can’t control pests, the burden would shift to farmers, and “they’d have to use [pesticides] a whole lot more. It would be like saying deer could roam freely anywhere in the county, until they got to a farm, and then they could be shot,” he told Civil Eats.

The Farm Bureau also supports the general view that pesticide regulation is best left to the federal government, says Ferguson.

Similarly, in a written statement provided to Civil Eats, the president and CEO of CropLife America Chris Novak said, “The U.S. Environmental Protection Agency Office of Pesticide Programs (OPP) regulates and registers all pesticides after years of diligent and thorough testing… Localities lack the staff resources and scientific expertise to conduct these reviews. Consistent with the original intent of the Federal Insecticide, Fungicide and Rodenticide Act, section 9101 of the House farm bill proposes to clarify the role of state and federal regulation.”

Meanwhile, lawsuits, like the one Montgomery county is facing, are happening everywhere, says Taddeo, who adds that, “if the preemption amendment gets passed, this makes their [pesticide industry] life much easier.”

Toher believes that groups like Safe Grow Montgomery don’t feel protected by the EPA, especially after its decision not to ban the powerful insecticide chlorpyrifos, and evidence that the agency’s then-chief Scott Pruitt met with Dow Chemical prior to the decision (The state of Hawaii has since moved forward with a ban of its own.)

In response, Toher says they’ve crafted rules that reflect their unique environments and values. “They’re looking at the data gaps in EPA’s pesticide registration process, at the emerging science, at the alternatives,” he says, “and they’re saying this in not what we want in our communities.”