Sally Fox is a cotton pioneer, having spent most of her life studying and growing naturally colored cotton, while also raising sheep and evangelizing the benefits of heirloom wheat. 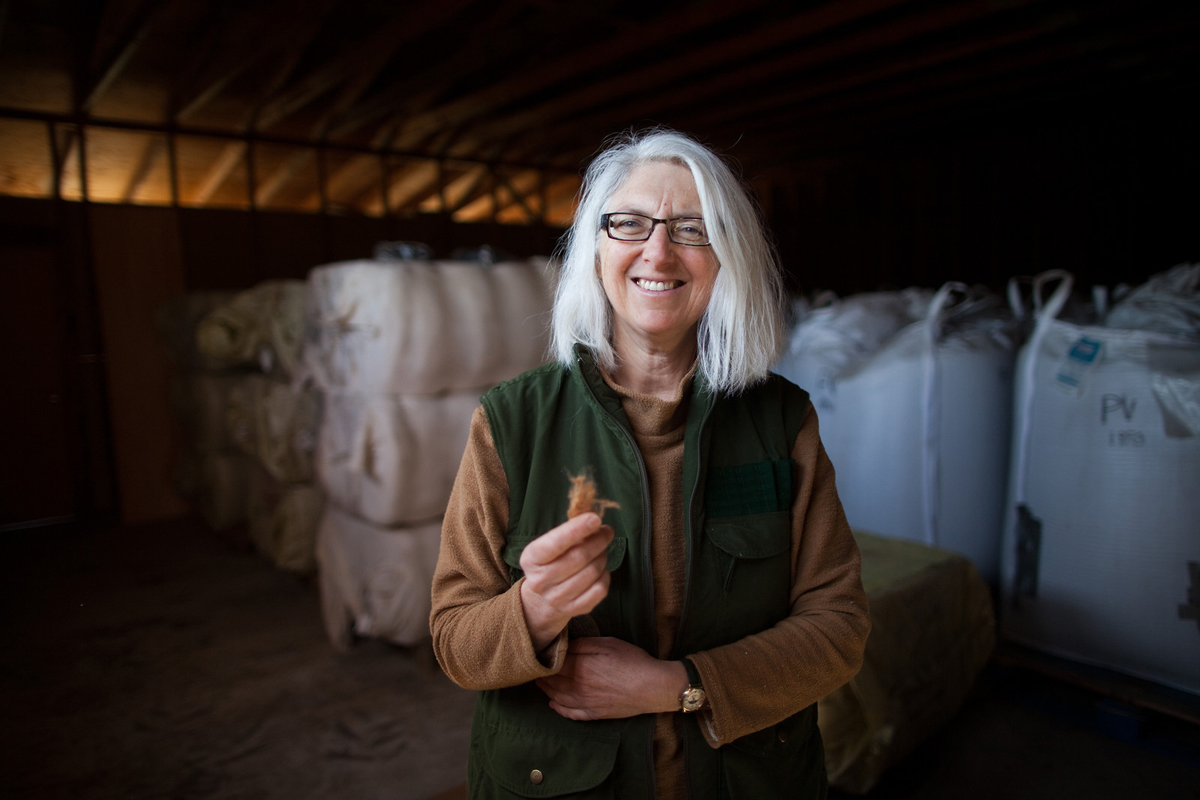 For the last 20 years, Sally Fox has operated a 160-acre biodynamic farm in the Capay Valley of Northern California. Just past the gate, dozens of heritage Merino sheep, freshly shorn, run along the fence. From inside her small house, there’s a view of the hills, still green from spring rains. In the living room sit a couple sacks of the Sonora wheat Fox grows, skeins of yarn spun from her the cotton she produces, and wooden file cabinets full of her research. Fox wears a loose dark blue shirt and tan pants—both made from cotton she bred.

Fox, endlessly curious and inventive, is something of a legend among cotton growers and organic farmers. Since she was a child, she has been committed to protecting the environment, refusing to use synthetic dyes that pollute the land, water, and human bodies. Her dedication to biodynamic farming is similarly absolute: Her Viriditas farm is home to a stunning number of innovative, sustainable practices. In addition to raising heritage sheep and growing heirloom wheat, she produces organic, non-GMO, naturally colored cotton that boasts rich, earthy tones. 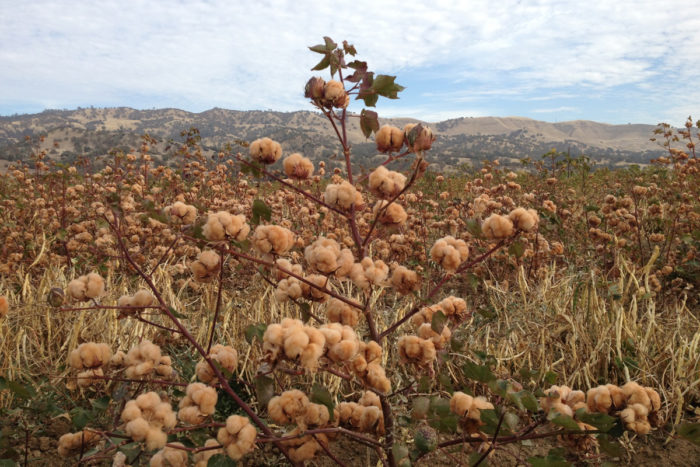 Fox spent years experimenting with breeding cotton in the early 1980s, until she developed a variety that could be commercially spun and picked by machine. Today, she continues to research greater color ranges and further ways to make colored cotton easier to spin, while also seeking out ecological methods to expand plant color and designing yarns for specific industries.

Fox plants about 70 acres of cotton “wherever it makes sense, in terms of irrigation equipment and crop rotations.” She does the same with the wheat, rotating the two crops and letting the sheep graze on the remaining 100 acres or so of land.

The sheep were an unplanned addition to the farm, but after 20 years, she says, “I’m totally attached to them! And they have built the soil carbon up hugely.”

That underscores another of Fox’s passions: Everything she does on the farm is in service of sequestering carbon, building up the organic matter in her soil and preventing it from being released into the atmosphere. And it’s working, she learned last year after Stanford students came out to do elaborate soil tests at Viriditas.

“My test results corresponded with the historical records of the farm of 1 percent soil organic matter when I bought the place, and now it’s at 2.6 percent—that’s a big difference,” she said, referring to a collaboration between the Gaudin Lab at UC Davis and Fibershed’s Citizen Science initiative that measured the soil carbon on her farm. “Why is organic farming called organic farming? Because it’s all about increasing the soil organic matter! They don’t say ‘chemical-free.’ They don’t say ‘pesticide-free.’ They say organic.”

Building a Market for Colored Cotton

Fox, who grew up in the Bay Area, started spinning when she was just 11. In high school, she set up a business in a dog-grooming facility, spinning people’s dog hair into yarn that she used to knit socks, hats, or scarves—or whatever they wanted.

She wasn’t planning to attend college, but she had always been interested in the environment, and after reading Rachel Carson’s Silent Spring when she was 12, decided she wanted to work to eliminate toxic pesticides. One of her high school teachers convinced her to study entomology so she could do just that. So Fox went to the California Polytechnic State University (Cal Poly), where she studied biology, and then to the University of California at Davis, where she earned a graduate degree in entomology.

At Cal Poly, where Fox was teaching hand spinning classes, a conversation with one of her students set her on the course she’s followed ever since. The woman’s daughter had been a high school craft teacher and had lost most of her brain function from years-long exposure to commercial dyes. Fox, who describes herself as a bit of a fanatic, went to the library to look up who made most commercial dyes.

“It’s the same companies that make pesticides, the exact same ones,” she said. “The chemical dyes are highly toxic. I don’t believe they’re toxic when you’re wearing them necessarily, but they’re certainly toxic in the manufacturing. And that’s how it was that I became fixated. I would never spin or weave anything dyed, only natural colors.”

This discovery led Fox to a life-long pursuit to secure natural fibers, wherever they came from—whether it was dogs from the grooming station or musk-ox hair she used to gather from the San Francisco Zoo.

Years later, after getting her Masters of Science degree in Integrated Pest Management at U.C. Riverside, Fox worked for a man who bred tomatoes and cotton. She found some brown cotton seeds in a drawer while cleaning out the greenhouse one day, and in her excitement, she tried to convince him to improve the fiber, which she says was coarse and weak and not good for spinning. He told her there was no market for colored cotton.

And so, with her customary zeal, Fox spent years working on the colored cotton, trying to make it stronger, longer and higher-yielding, by breeding it with cotton that already had those qualities. 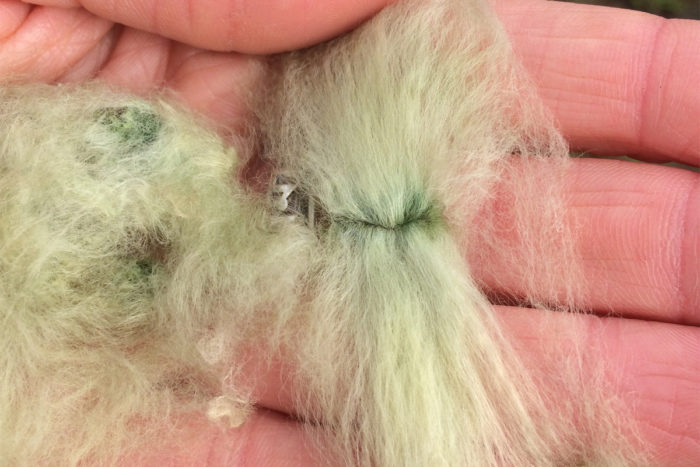 Though she worked as an entomologist, she spent all her weekends and vacations in the field, discovering a variety of green cotton along the way. When she had developed cotton strong enough to be machine-spun, she quit her entomology day job, and, with her siblings’ help, in the mid-1980s bought her first farm, in Southern California’s Kern County, where she stayed for eight years.

In 1993, white cotton growers’ fears of cross-pollination led San Joaquin County officials to outlaw colored cotton, so Fox moved on to Arizona, where the hot climate was better for growing the crop and where there were no restrictions on growing colored cotton.

The colors in Fox’s cotton got darker rather than fading with time, and some people were willing to pay a lot for beautiful colors that didn’t come from harmful dyes. Fox’s built a stable of customers, including Levi’s and L.L. Bean, she earned awards and recognition for her contributions to organic agriculture, and her business made millions of dollars—everything seemed great.

Until it didn’t. In the pursuit of profit margins, starting around 1996 U.S retailers began ditching their long-term U.S. suppliers in favor of cheaper sources in India and China. In the United States, mills closed, decimating the textile industry. Fox had grown cotton she couldn’t sell, and now the Arizona farmers, like the ones in Southern California, said they were worried about pollen from her cotton drifting over to their white cotton and tainting the color of their crop.

In response, Fox moved her farm in 1998 to its current location, Yolo County’s Capay Valley, northwest of Sacramento, an area where organic farms thrived and her ideas were welcomed.

A New Operation in California

Shortly after moving back to California, Fox began working with sheep. She needed the animals to get rid of starthistle—a noxious weed that displaces other vegetation—and she had dreams of producing a machine-washable mixture of cotton and wool.

She found a source to buy Merino sheep, intending to bring home six at $300 each. But when she drove her truck and trailer over to the farm, she found that the farm’s new management planned to slaughter any unsold sheep the next day. So she loaded 30 into her trailer and took them home. Three days later, those sheep were having lambs. Now, 20 years later, she maintains a flock of about 140 Merino sheep. 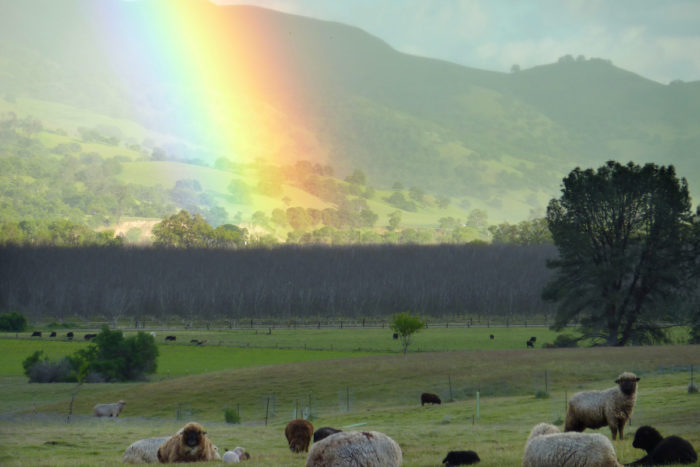 The sheep have played a central role in Fox’s education about carbon farming. By managing the rotation of sheep and crops, she is learning how best to build up the soil and increase its organic matter. As with spinning and weaving, using naturally colored cotton, and taking on doomed sheep, she throws her whole self into it.

The same pattern holds true for the Sonora wheat she grows. Its long roots also help sequester carbon, she says, which is why she decided to plant it—but she also loved the taste. Fox learned about the heirloom wheat from Monica Spiller, a microbiologist and the founder of Whole Grain Connection in Mountain View, California, whom Fox admires for her fanaticism. Fox, who had never been a big fan of wheat, tasted the Sonora and loved it.

Modern wheat doesn’t have strong roots or stems because farmers use fertilizers to meet all its needs, Fox says, so it doesn’t build up its roots to seek out nutrients. In contrast, the heirloom Sonora wheat has long roots that add nitrogen to the soil, and since all the energy goes into the grain, rather than the stem, making it more flavorful.

For 10 years, Fox sold her wheat to Anson Mills, a national seller of heirloom grains. But after they told Fox they didn’t feel right taking her entire supply and she should try and sell it locally, she expanded her customer base to include the Davis Food Co-op, the San Francisco bakery Josey Baker Bread, several California farmers, and the restaurant at Napa Valley resort Meadowood. 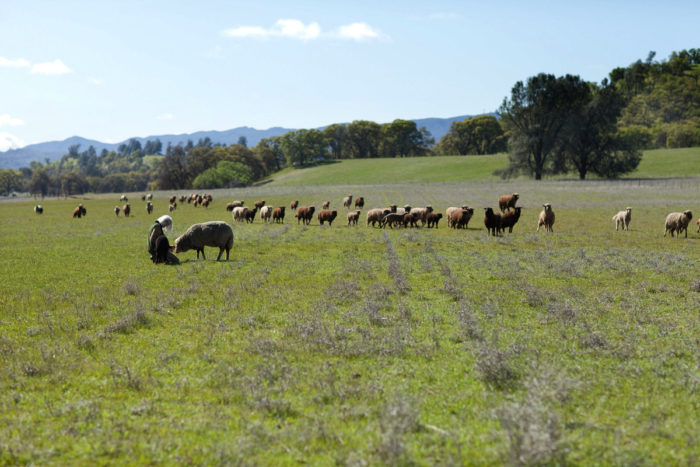 Sally Fox with her sheep in the field. Photo © Paige Green

Fox has been through it all—she has had to move farms, encountered hostility from other breeders, and built up a successful business to have crash down due to globalism. Now she is dealing with California’s recent weather patterns that have brought historic wetness and dryness to the farm. Her wheat got flooded, and she says she was lucky to have a crop at all. The wheat did fine in the drought due to its long roots, but she didn’t plant cotton at all, worried about her well going out. The recent historic fires in California have taken a toll as well, forcing Fox to evacuate her farm for a week.

What she wants to do, Fox says—and what she’s good at—is research and development. Fox hopes to create a nonprofit, so foundations can support her work. But that takes time, and she hasn’t found that time yet, what with shearing the sheep, grinding the wheat, walking the fields and irrigating—as well as driving back and forth to the apartment she keeps in Davis so her 16-year-old daughter can attend high school in the city.

“I’m doing way too much,” she said. “I should be training young people to do my work. This farm has been carefully tended, and I’ve improved it so much. My work should be supported. I don’t know quite yet how to get from here to where it should be, but it will happen.”