After Prison, Working Toward a Healthier Food Future | Civil Eats

After Prison, Working Toward a Healthier Food Future

L.A. Kitchen teaches culinary skills to those whose memories of eating ‘on the inside’ remain fresh. 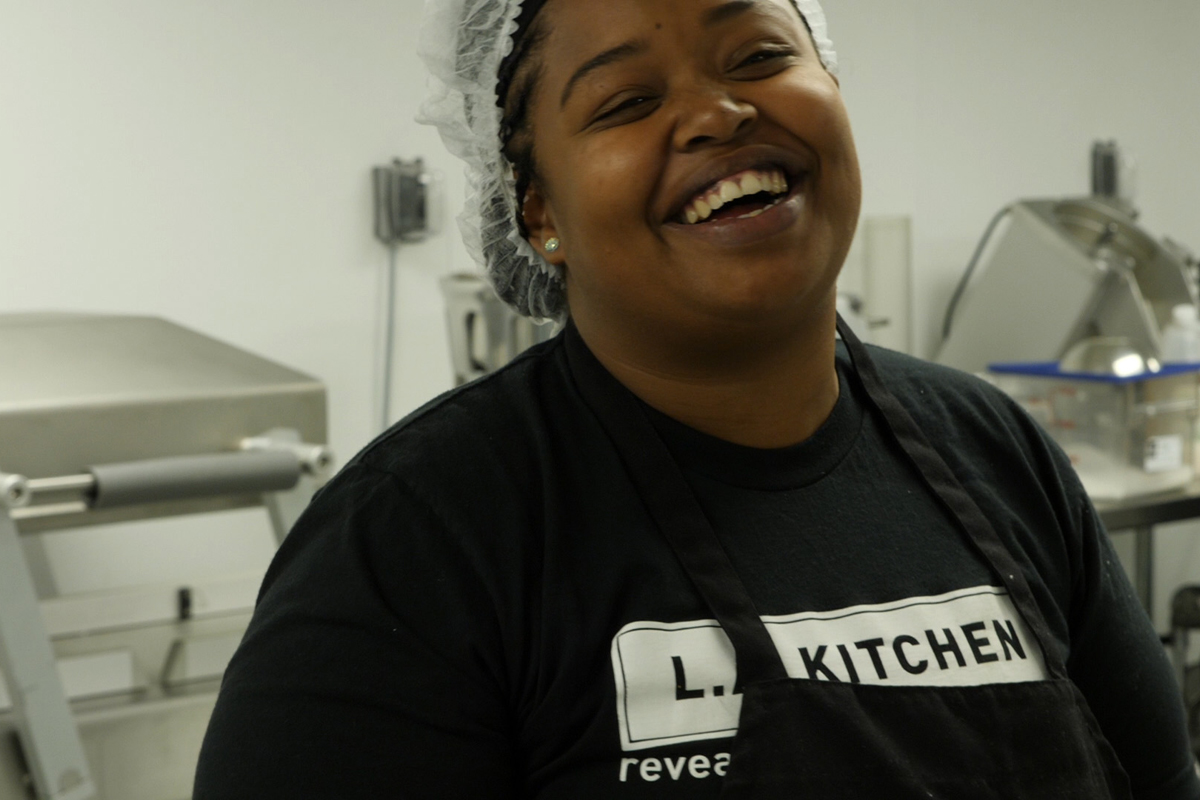 “Neither people nor food should ever go to waste.”

This motto appears in large, yellow bubble letters on a chalkboard at L.A. Kitchen, a five-year-old nonprofit organization that combines a food-rescue operation with a culinary training program for the formerly incarcerated, and distributes nutritious meals to low-income seniors around Los Angeles. 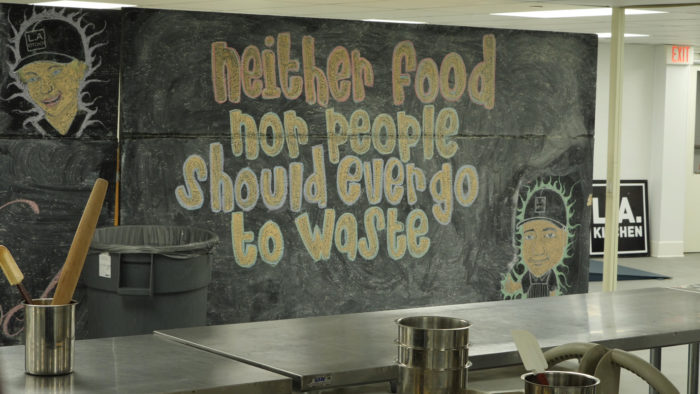 The U.S. leads the world in terms the amount of food wasted and the number of people who are incarcerated. In response, L.A. Kitchen’s founder and president, Robert Egger, developed an organizational model that confronts the overlapping social injustices of both problems.

“Less food goes into the landfill, fewer young people go to prison, or end up on the streets, and fewer ‘returning citizens’ go back,” Egger recently explained to VoyageLA about the benefits of L.A. Kitchen’s work. “Better yet, every year, the graduates … will earn about $2 million in new salaries and contribute over $200,000 in payroll taxes.”

Based in 20,000-square-foot facility, the program welcomes a new crop of up to 26 students—people who were formerly in prison, homeless, or in foster care—every 14 weeks, and teaches them culinary, professional, and “life support” skills. A spin-off of Egger’s initial project, D.C. Central Kitchen, the program is based on the concept that “hunger isn’t about food,” but a side-effect of poverty, and its staff works to address the root causes of poverty in the City of Angels.

Graduates of the program put their newfound kitchen techniques to use at successful local restaurants including Wood & Vine, Kitchen Mouse, Post & Beam, and A-Frame. The food they make stands in stark contrast to what they experienced in prison. And yet, here at L.A. Kitchen, amid the bustle of food preparation, the experience of eating “on the inside” is still fresh. 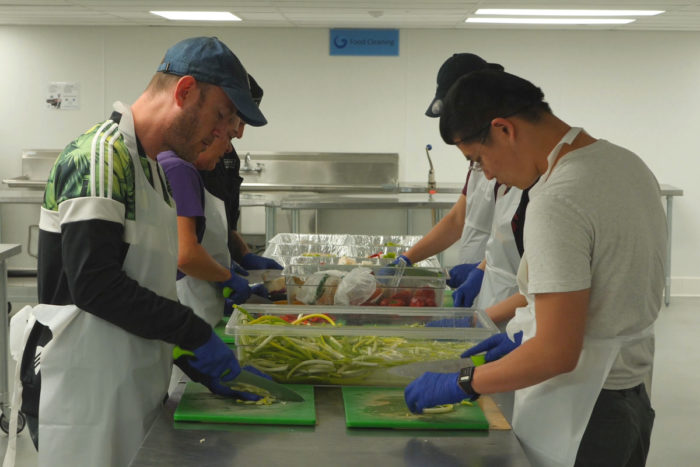 As I stood in the 20,000-square-foot space in Los Angeles’s Lincoln Heights neighborhood, I watched employees teach volunteers how to peel and chop and spoke to a number of former inmates about the food culture they experienced in prison.

‘The Food Sucks in There’

Alisha Larsuel, an L.A. Kitchen graduate who assists with meal distribution and the volunteer program, told me she remembers the “mystery meat” served in the jail cafeteria. Samantha Del Tour, a graduate and employee of L.A. Kitchen’s Strong Food initiative, which purchases produce that would otherwise be discarded and uses it to make healthy food products to sell, overhears us and interjects: “Tell him the food sucks in there.”

Everyone within earshot laughed knowingly.

That is the first lesson of eating while locked up: The food in correctional facilities is disgusting. Daniel Genis, who spent 10 years in New York state prisons, has written that prison food is “an expression of hatred in soy protein.” Many American prisons serve unruly inmates something called Nutraloaf, a bland block of blended, baked, and congealed ingredients that has been challenged in court as cruel and unusual punishment. Even though the food must pass minimal nutritional standards, regulation varies and sickness is rife.

A 2017 article in the Atlantic called prison food the cause of a “hidden public health crisis,” citing a Centers for Disease Control study showing that inmates were 6.4 times more likely to get a food-related illness than the rest of the U.S. population.

Inmates respond to their limited and unsavory options with astounding creativity, according to the L.A. Kitchen trainees and graduates with whom I spoke. They do laundry or cut hair for other inmates to earn extra cash so they can save up to buy commissary foods like ramen. (Official jobs for prisoners pay just pennies per hour.)

Prisoners sometimes retrofit their personal spaces into makeshift kitchens, sanding down their lockers to turn them into grills; sticking electrical cords into buckets of water to make “stingers,” which harness the electrical current to boil the water. For many inmates, ramen provides a base for myriad “spreads”—the term for meals constructed out of ingredients like chips, cheese, and processed meat. Larsuel celebrates the care and ingenuity that goes into cooking while locked up, maintaining that no re-created version on the outside could match the quality of a meticulously prepared jail spread made with a ramen base. 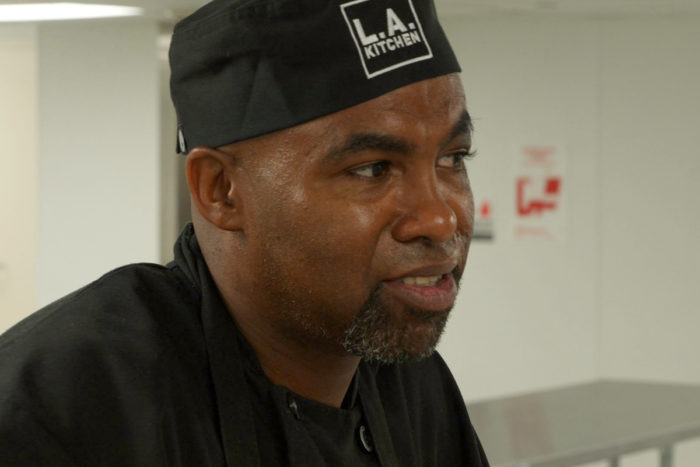 Curtis Daniels, a current L.A. Kitchen trainee who worked in the prison kitchen while incarcerated, explains how he navigated between the cafeteria and the commissary store to generate income and improve his meals while inside. He was able to use his position to establish a burrito business: “I would spend my money at commissary just to buy the seasonings, the tortillas, the cheese.” He sold burritos for a dollar a piece. “I would get this stuff—go make 120 burritos, probably make $150; only spend $30,” he says.

‘There is No Love There’

Rudy Flores, another graduate-turned-employee, sums up the experience of working in a prison kitchen, where large corporations such as Aramark typically supply the food: “There is no love there,” he says.

Flores tells a story of how inmates might delight over the recognizable smell of spaghetti in the kitchen only to find at dinnertime that the ingredients “have all been blended up into one thing, so it doesn’t taste the same.” The blended spaghetti then dolloped onto the inmate’s plate is a vehicle for nutrients that has been vacated of taste, familiarity, and the pleasure of eating. 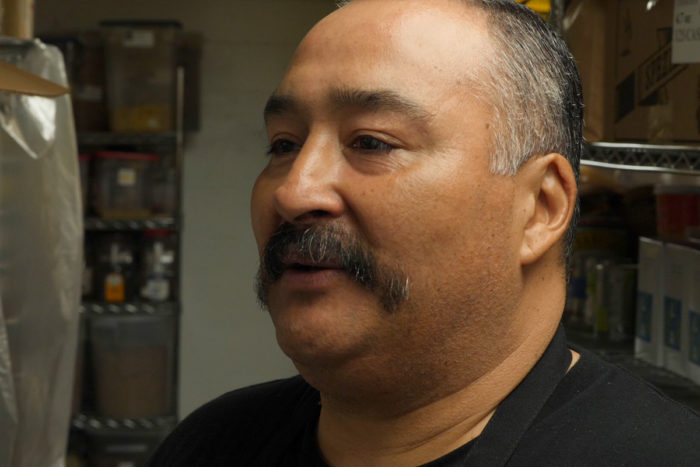 “When we go back to our cells,” Flores says, we cook for ourselves, and we give that pleasure, so that we have a little bit of the outside. That’s the only way I actually think I survived mentally.” Refusing bland meals such as blended spaghetti and instead making tamales in his cell with Fritos as masa, he tells me, would remind him of home.

Larsuel laments the lack of fresh produce, highlighting the absence of healthy options and the larger social injustices underpinning that deprivation, noting that food in the officers’ cafeteria is more likely to include fresh fruit and vegetables. “The good stuff that [prisons and jails] do get, like what we get donated here [at L.A. Kitchen], that goes to the police officers,” she says. To create better meals for inmates, she recommends abandoning the mystery meat to offer both fresh produce and the option of culinary training.

“Maybe they should start a little program like L.A. Kitchen [in prisons],” she says.

Meanwhile, organizations that do similar work around the country—San Diego’s Kitchens for Good, Cleveland’s Edwin’s Institute, New York’s Drive Change—do their part to redress injustice by providing job training to an underserved population.

Larsuel says her education at L.A. Kitchen changed the way she prepares food with her family. To encourage her grandmother to eat more fresh, whole foods, Larsuel recently cooked her homemade kale chips. As she and the other L.A. Kitchen trainees and graduates move from the privation of prison to the challenges of the professional food industry, they bring with them a combination of kitchen creativity and an awareness of health and nutrition—a solid start as they set out to transform their uncommon culinary background into a brighter food future.

This article is part of FOOD FUTURES, a new digital series created in partnership with UCLA’s Laboratory for Environmental Narrative Strategies (LENS) and KCETLink Media Group, which will explore current innovations and visions for ecological, equitable food systems. More FOOD FUTURES stories can be viewed at kcet.org/foodfutures and linktv.org/foodfutures.

Robin Kello is a Ph.D. student at UCLA, where he studies early modern literature, with a particular focus on travel, intercultural contact and representations of carceral space. Read more >