People’s Kitchen Collective is Feeding and Fueling a Movement

The Oakland-based grassroots organizing group has been hosting community dinners, feeding activists, and launching cultural projects for the last 10 years. 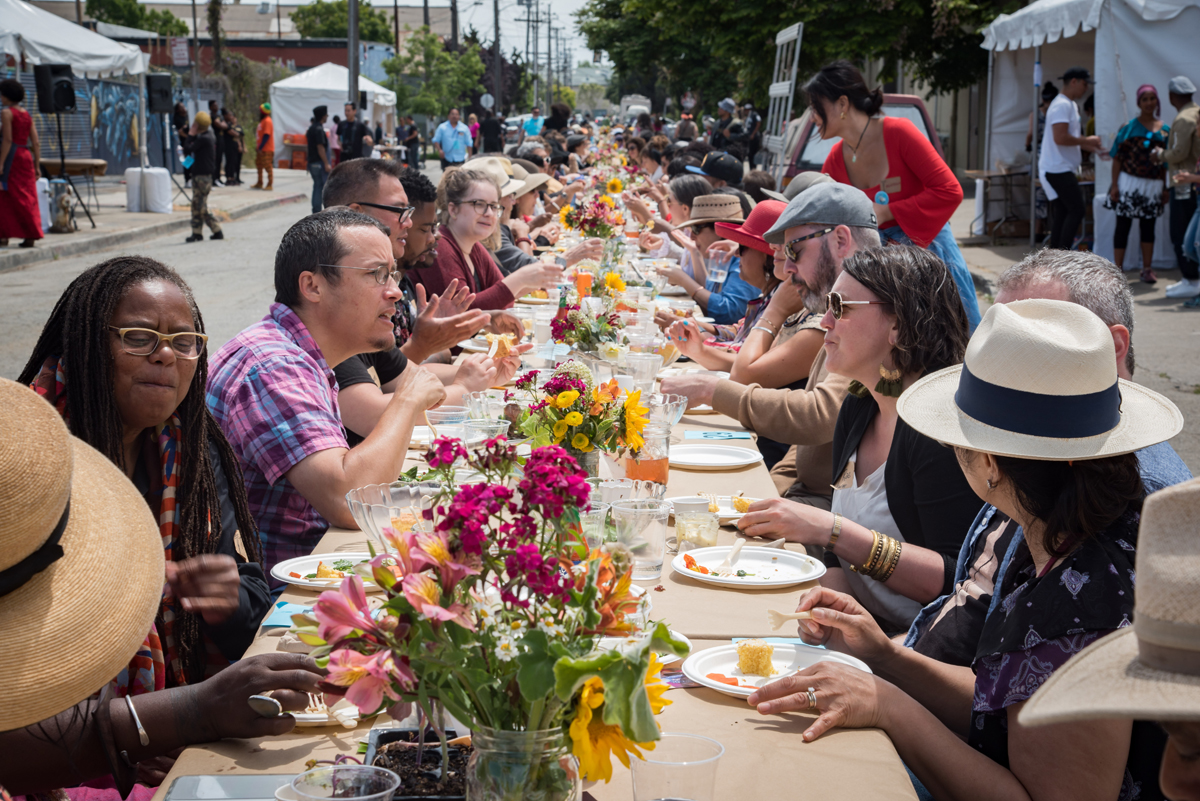 On a Sunday in May, nearly 600 people sat down at a series of long tables to a free lunch in West Oakland, California. They ate salad, cornbread, collard greens, heirloom beans, and pulled chicken—a meal served family-style and designed to honor the history of the Black community in Oakland. The tables were set up at the intersection of two streets—Magnolia and 28th—where 50 years earlier, police officers killed 17-year-old Bobby Hutton, the first recruit to the Black Panthers.

The event was hosted by the People’s Kitchen Collective (PKC) and inspired by the Black Panther Party for Self Defense’s free breakfast program, which fed tens of thousands of children every week between 1969 and 1971 to help them start the school day ready to learn.

Today, says Saqib Keval, PKC co-founder, much of Oakland’s history has been whitewashed and Black community organizations there face eviction. But on this day, people sat together and remembered.

Keval and co-founders Jocelyn Jackson and Sita Kuratomi Bhaumik coordinated a crew of about 120 volunteers who cooked, delivered food, and made art for the event. They also collaborated with artists, musicians, performers, and social justice organizations that hosted tables and facilitated conversations about cultural preservation, movement building, and self-determination. 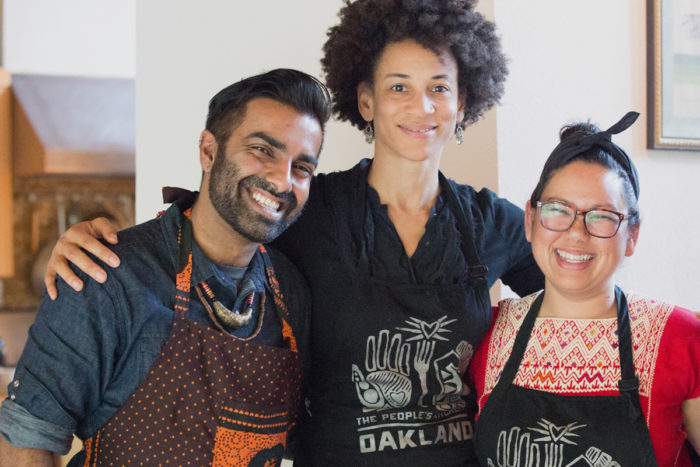 The lunch was the latest effort by the Oakland-based grassroots organizing project, which has been hosting community dinners, feeding activists, and launching cultural projects for the last 10 years.

PKC isn’t just interested in bringing people together over delicious meals, though nourishing people—and movements—is vital to their work. They also believe their role is to take an unflinching look at the difficult stories that food tells.

“Food traditions tell us what we’ve been through and where we’ve been: revolution, migrations, enslavement, rebellions,” says Keval, who founded the project in 2007. “All of that is reflected in our recipes because [they] are passed down from generation to generation, and they teach us what each generation has been through.”

Take bunny chow, for example. The People’s Kitchen Collective chose this dish, which originated in apartheid-era Durban, South Africa, as one of the courses in a 2015 dinner hosted by the Museum of the African Diaspora (MoAD) in San Francisco. At first glance, the dish is pretty straightforward: curry ladled into a hollowed-out loaf of bread that you can pick up and eat on the go. 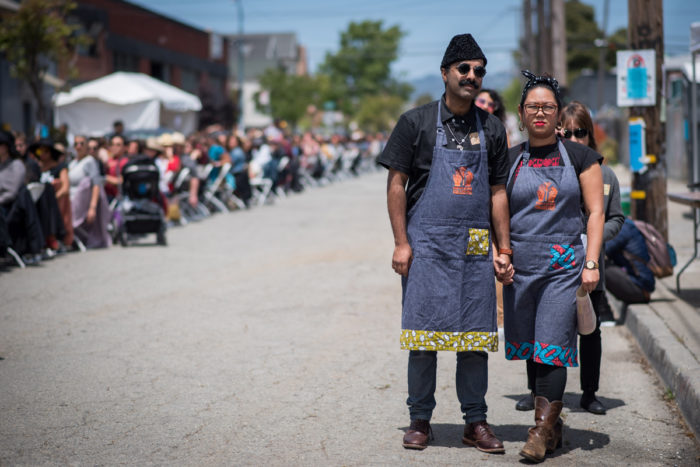 But its origin story reveals layers of complexity. According to Bhaumik, many South Asians in Durban had bakeries where they sold bread to white Afrikaners who came in through the front door, and bunny chow to Black miners out the back windows on their way to work. Bunny chow eateries were among the few places where South Asians, Black South Africans, and white South Africans interacted, and later they became politicized sites for people to meet and talk.

Similarly, the People’s Kitchen Collective events are meant to provide spaces for people today to meet and discuss injustices both historical and modern. “You’re coming together in this way of either feeding people or being fed,” says Sana Javeri Kadri, a fair trade turmeric entrepreneur and PKC photographer. “It immediately makes you very close and immediately makes you much more likely to have to deeper conversations with the people around you.”

PKC participants have gathered to discuss subjects as wide-ranging as gentrification, white supremacy, and feminist futures, but woven throughout their work is a common theme: a desire for shared liberation and the conviction that food is part of the awakening. Whether it’s a peach, a grain of rice, or a dish of collard greens, everything we eat can be a thread we pull on to start seeing the bigger picture.

This is part of what makes the People’s Kitchen Collective so unique as a food justice project: Their projects call on us to examine how entrenched racism, sexism, and white supremacy are in the everyday, from the varieties of corn available at your grocery store to the color of the first faces you see when you walk into a restaurant. Bhaumik, who teaches in the Diversity Studies program at California College of the Arts, says that while food is connected to almost every social issue, it’s one of any number of avenues toward liberation. “What I tell my students is: Food is a tool, and you have an obligation to use the tools that you have … to make real the world that we want to live in,” she says. 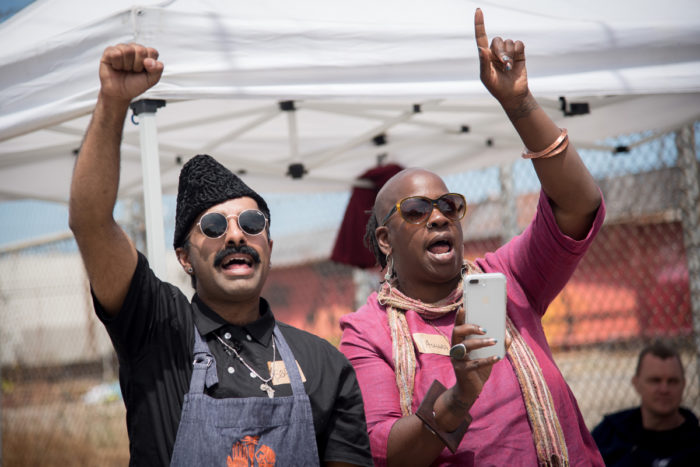 “The work that they do keeps people honest,” says Bryant Terry, Chef-in-Residence at MoAD and a long-time PKC supporter. “[PKC] really plants the pole in terms of their far-left politics around food and making the connections to these other critical issues of our day.”

The West Oakland event “is a testament to the power of the work that they’re doing and people’s desire to really support it and push their work and their movement forward,” says Terry.

The PKC approach to food service is a radical departure from traditional restaurant work. As Javeri Kadri notes, volunteers like her are encouraged to view their role as not simply one of service, but one of engagement. Once, she says, she came to an event dressed in bright colors and asked if she should change into something black. No, they told her. “The whole point is that you come as you are, you come as bright as you like, take up as much space as you need,” she says.

Not that staying true to their values has always been easy. In fact, in the early years it often meant letting go. Under the guidance of Keval, who ran the original incarnation of the group under the moniker The People’s Kitchen, they hosted pay-what-you-can monthly dinners at Cosecha, a Mexican restaurant in downtown Oakland, serving 200 meals at a time.

“These were pay-what-you-can meals that were super community-based and brought together a really diverse group of neighborhood people who normally couldn’t afford stuff like this,” says Keval. “I wanted to change the notion of who’s considered a chef … and highlight the work of youth who are involved in political projects that we collaborated with.” 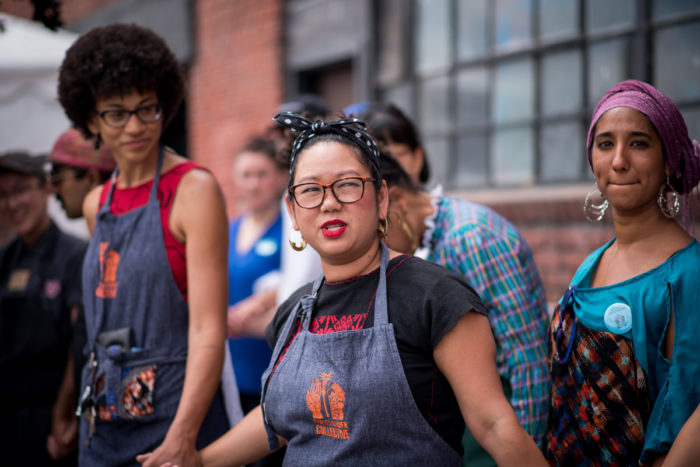 But after a couple years, he says, something odd happened: The tickets began to sell out online within a few hours of going live. That’s when he discovered that opportunists were reserving People’s Kitchen tickets and scalping them on Craigslist. “The [dinners] just kind of, for lack of a better term, got gentrified,” he says. It was a difficult decision, but Keval decided to take a break before considering his next step.

It was around this time, in late 2015 and early 2016, that he started cooking with Jackson and Bhaumik at events around the Bay Area. Bhaumik remembers it as a “crazy month and a half” where they ended up cooking together almost every week. And at some point during that time, the People’s Kitchen became the People’s Kitchen Collective. “As a collective, we are more sustainable, can do more, and keep going,” says Keval.

The three chefs have complementary backstories and approaches to food: Jackson has a law degree and worked in the Peace Corps. She comes from a musical lineage and carries on her family’s tradition of opening each PKC dinner with a song. Keval has a labor organizing and professional kitchen background, and now co-owns a restaurant in Mexico City called Masala y Maíz that reflects his South Asian roots. And Bhaumik is a multi-disciplinary artist and educator whose Colombian-born Japanese mother met her West Bengali father in Southern California.

They “all had this love for the Black Panthers’ free breakfast program and food as a storytelling medium,” Bhaumik says. In addition to the recent meal in West Oakland, the collective has hosted a free breakfast every year for seven years. (This year it will be held on October 13.) And they all shared a goal of disrupting and critiquing the concept of the restaurant, while exploring other less-exploitative models.

“The restaurant model as we know it, is very much based on the French military, and it replicates these power dynamics—very colonial, very patriarchal, very racist,” says Keval. Indeed, the deeper you travel into most of today’s restaurants, he notes, the darker the skin of the people and the less well-paid the labor. There’s a power dynamic between the customer and the server. Instead, Keval says, PKC volunteers are asked to think of themselves as being “of service,” the same way that people who serve you food in a family space “want you fed and taken care of.”

This is why PKC tends to serve family-style meals. “We also want to make sure that people are there looking at each others’ plates … making sure everyone has enough to eat, and that everyone feels taken care of,” Keval says. 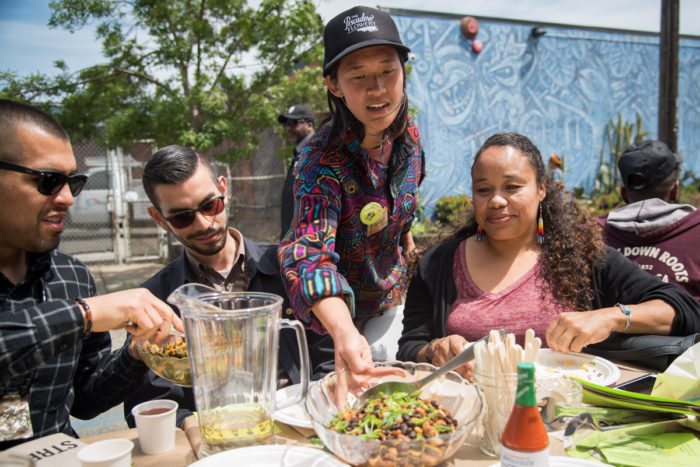 Diners at PKC’s To the Streets event. (Photo © Brooke Anderson)

As a not-for-profit entity that has relied on donations and only received their first grant this year, the trio of chefs has had their struggles. “How do you create something that’s so community-focused and make it sustainable in an environment where everything is about monetizing and making it palatable for the mainstream and for the dominant? How do we get those same levels of resources, that same amount of press, and get that attention for work that is being done by and for people of color in communities of color without being exploitative?” Keval asks. But to this day, he counts staying accountable to their people as one of PKC’s greatest successes, even if that has meant losing some opportunities to monetize and expand.

And, bit by bit, their hard work has been gaining attention. Last March, PKC was selected as one of three honorees by the Center for Asian American Media at CAAMFeast, a celebration of chefs who are “uniquely compassionate in the ways they cook to ultimately serve their communities.” And they’re not stopping there. They want people to eat with them, then go out and create change. Their goals are broad and future-looking, as summarized in their motto: “Feed the mind, nourish the soul, fuel a movement.”