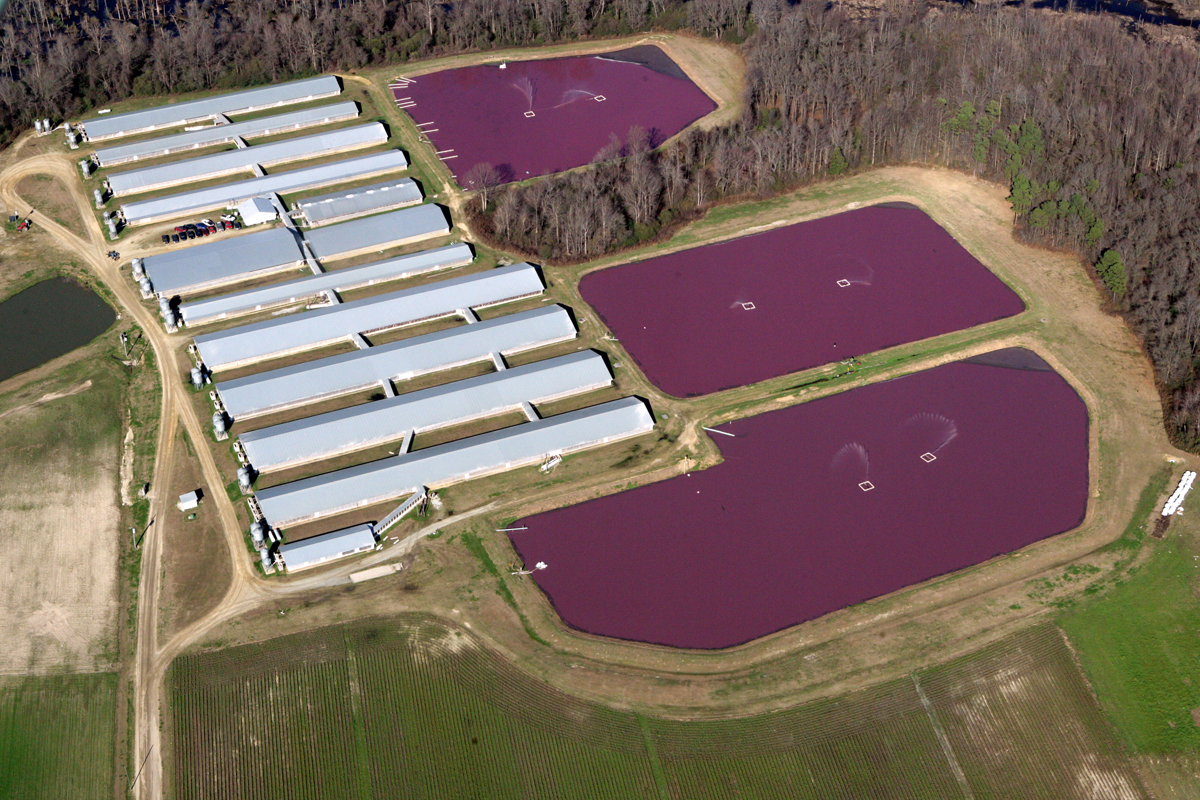 Keeping the waste from North Carolina’s hog industry out of the state’s waterways requires a complex set of steps.

The confined animal feeding operations (CAFOs) that house most of the state’s 9.5 million hogs store the animals’ waste in large, open-air lagoons that together hold enough fluid to fill 15,000 Olympic-sized swimming pools. To prevent the lagoons from overflowing, the farm operations periodically dispose of the waste by spraying it onto nearby fields of feed crops, where it helps fertilize the soil. Or that’s the idea. But sometimes, the sludge from these facilities isn’t fit for spraying.

The state Department of Environmental Quality (DEQ) requires that hog farms provide a sample of the sludge—which contains feces, urine, and the water used to flush the barns—to the agency’s Division of Water Resources (DWR) within 60 days of applying it to spray fields with industrial sprinklers.

The state tests the samples for nitrogen and phosphorous as well as two heavy metals—zinc and copper, and the results determine how much sludge the operator can spray onto the land without overburdening the soil, creating runoff, and contaminating the groundwater and rivers. If levels are too high, the DWR may prohibit spraying entirely.

Now, the North Carolina State Bureau of Investigation (SBI) is investigating the work of a watershed technician in the eastern part of the state who appears to have submitted samples that underrepresented the toxin levels in the pits—by more than 140,000 percent in one case.

In late March, Billy W. Houston, a 35-year Duplin County watershed technician working as a private consultant at the same job, submitted waste samples from 55 hog lagoons on 35 farms in two counties. The tests showed that the samples contained toxin levels substantially lower than those that showed up when the state retested the same lagoons less than a month later.

Will Hendrick, staff attorney for the Waterkeeper Alliance and manager of the North Carolina Pure Farms, Pure Waters campaign, said at first glance, the similarity of the toxin levels in the samples Houston submitted suggests they were collected from one or a few facilities and then passed off as if they’d been collected from the full 55 lagoons in question.

“But what I can say confidently,” he continued, “is there are significant disparities between what was submitted [by Houston] and what was actually in the lagoons as confirmed in an agency investigation.”

Hendrick does not think Houston is “a rogue bad actor—a single non-representative consultant,” he said, rather that the situation is representative of larger flaws in how the state manages the hog industry’s waste. “If there’s anything we know about the swine industry in North Carolina,” he said, it’s that it “tries to cut costs when it comes to waste management. That’s why it continues to employ this archaic technology instead of environmentally superior alternatives.”

Houston did not respond to a request for comment.

An Industry at a Crossroads

Hog production is big business in North Carolina. The state brings in $2.9 billion annually from hog sales—ranking second only to Iowa, according to the 2012 Census of Agriculture. Duplin County, where Houston has worked since 1983, is the top hog producer in both the state and the country, with 2.3 million hogs (and 865 waste lagoons). Neighboring Sampson County, where Houston also collected samples, contains the second highest number of hogs in the state and country—with 2.1 million animals (and 774 accompanying pits). 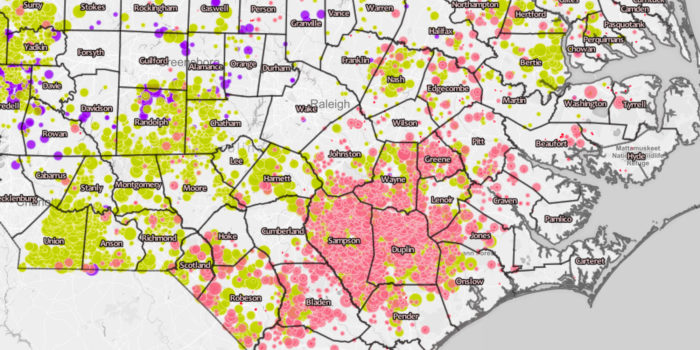 A map of hog and poultry CAFOs in North Carolina; the red dots represent hogs, and Samson and Duplin counties are in the bottom-middle of the map. (Map courtesy of EWG and Waterkeeper Alliance)

The investigation into Houston’s waste-sampling discrepancies comes at a time when the effects of the hog industry on North Carolina residents are making news in other ways. Currently, the second of 26 nuisance lawsuits filed by 500 Eastern North Carolina residents against hog farm Murphy-Brown LLC, a subsidiary of Chinese-owned Smithfield Foods and owner of most of the hogs in North Carolina, is moving through federal court. [Update: On June 29, a jury awarded the plaintiffs $25 million in damages in the case, although that amount will likely be reduced under a separate N.C. state law.] Additionally, Republicans in the state legislature are making moves to limit residents’ ability to file nuisance lawsuits in response to the industry’s harmful effects.

Naeema Muhammed, co-director of the North Carolina Environmental Justice Network (NCEJN), said the allegations of waste lagoon tampering do not surprise many of the residents who live near the hog farms—who primarily occupy low-income communities of color. In fact, they corroborate the residents’ experiences.

“It connects with everything we’ve heard community members say—‘It stinks. My water is contaminated. I have to keep my doors and windows closed. I can’t sit outside with my children. I can’t enjoy my property.’ And ‘I feel like a prisoner,’” Muhammad said. And, she added, “people are being made sick by the contaminants [the CAFOs] are spreading around in the communities.”

Upon noticing oddities in the results of Houston’s sampling in March, the NC Department of Agriculture lab contacted the DEQ, prompting the agency, on April 13, to send multiple teams of inspectors to the 35 farms in question to collect their own samples.

“It is unlikely that a lagoon make-up will change significantly in a month without a significant operations event occurring, like a lagoon sludge clean out,” the state DWR wrote to many of the hog operations at the center of the investigation in letters alerting them to the discrepancies.

Patty McQuillan, public information officer with the SBI, confirmed the existence of a wastewater sample testing investigation but did not provide additional details. The DEQ declined to answer questions from Civil Eats, noting that their investigation is ongoing. 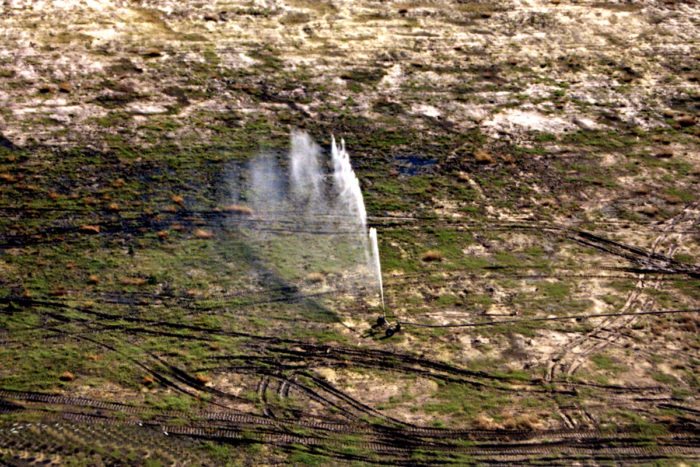 Hendrick does not believe the hog farm operators who contracted with Houston were unaware of his alleged sampling tendencies. “I have a hard time believing that operators with such visibly apparent sludge management problems did not select someone they felt would reasonably mask that problem to their benefit,” he said. “If I’ve got a 1960 jalopy spewing black smoke that won’t pass inspection, I’ll probably find the inspector that will look the other way.”

While SBI investigators are examining Houston’s sampling, other high-profile stories are unfolding around the hog industry in North Carolina.

In April, a jury sided with the 10 plaintiffs—neighbors of Bladen County’s 15,000-hog Kinlaw Farm—in the first of the 26 suits against Murphy-Brown over health and quality-of-life concerns resulting from the open waste lagoon and spray field system. Ruling that the company operated with “willful and wanton” disregard for the plaintiffs’ rights, the jury ordered the company to pay more than $50 million in damages.

While about a week after the ruling, the presiding federal judge reduced the damages to $3.25 million to comply with a 1995 North Carolina law that caps punitive damages, many view the jury’s ruling as landmark. It represents the first time the courts have acknowledged the suffering CAFO neighbors face and held the hog industry accountable, said Danielle Diamond, interim director of field operations for Socially Responsible Agriculture Project (SRAP).

Now, as the second of the 26 trials proceeds, the North Carolina GOP is attempting to limit the ability of residents to use the legal system, currently their last resort, to protect themselves from the dangers of living near hog operations.

State legislators also added a late provision to the state 2018 Farm Act, Senate Bill 711, which prohibits residents from being able to file a nuisance lawsuit against an agricultural or forest operation except within a year of its establishment or its making of a “fundamental change” (which, incidentally, cannot include new ownership or changes in the size, product produced, or technology used). The bill also prohibits damages from being awarded unless the farm operator has a criminal conviction or has received a regulatory notice that they have violated a state farming rule.

The bill passed the North Carolina Senate and House as of June 14 and is headed for the desk of Democratic Governor Roy Cooper. [Update: on June 25, Gov. Cooper vetoed SB 711, but the state’s Senate and House overrode the veto, securing its passage into law.]

The effort to limit residents’ ability to file nuisance lawsuits in North Carolina is not new: it began last year with the passage of the Republican-backed House Bill 467, known as the “Agriculture and Forestry Nuisance Remedies” bill, over Cooper’s veto. The bill caps payments in future nuisance suits against commercial hog farms to a sum related to the diminished value of a person’s property—and prohibits them from receiving compensation for damages related to health, quality of life, enjoyment of property, or lost income.

Supporters of the latest bill, led by Rep. Jimmy Dixon and Sen. Brent Jackson, said the plaintiffs’ victory in the first of the suits against Murphy-Brown necessitated the measure.

North Carolina Agriculture Commissioner Steve Troxler, another strong supporter of the bill, defended the pork industry in a statement, pointing out that pork production is the second largest segment of North Carolina agriculture, with $2.1 billion in cash receipts, and that it supports 46,000 full-time jobs.

“I consider the production of food and fiber to be admirable and certainly not a nuisance, and I want people across the state to understand how important agriculture, including the pork industry, is to our state,” Troxler said. “When we take our farmers and food production for granted, we stand to literally lose the hand that feeds us.”

Naeema Muhammad of NCEJN sees the passage of the bill as an act of desperation. “The industry is running scared,” she said. “For the first time that I can remember, somebody has held them accountable for the damages they’ve caused to people. There are many more cases out there to be heard, and they are well aware of what the implications of the first win could mean for the rest.”

‘The Police Can’t Police Themselves’

The system in place to regulate hog farms in North Carolina has long concerned Muhammad and other advocates for environmental justice. The state holds farm operators—who can then hire out the task to technicians like Houston—responsible for their own waste lagoon sample collection. “The police can’t police themselves,” Muhammad said.

Additionally, recent budget cuts to the state’s DEQ mean few inspectors are available to oversee hog operations’ behavior. “The way the industry has been allowed to operate in the state leaves room for underreporting and anything else they want to do that’s not right,” Muhammad said.

Hendrick of the Waterkeeper Alliance praises the fact that North Carolina state agencies responded to the red flags in Houston’s samples. But he’s concerned that the investigation has only focused on figuring out the genesis of the problem—what caused the discrepancies—and not on its effects on environmental and public health.

As far as he knows, the DEQ has not requested the land application records it would need from hog farm operators to determine if and when they sprayed the sludge containing the high concentrations of nutrients and heavy metals onto their fields.

“We are a little discouraged by the apparent lack of interest in learning more about the impacts to communities and to waters that may or may not have resulted from land application [of sludge] with doctored numbers,” Hendrick said. He hopes that’ll be the investigators’ next move.

Muhammad points out that in speaking out about the effects of hog farm pollution, North Carolina residents are not trying to harm the hog industry or its contracted farmers, as those groups often believe.

“We’ve never advocated to put anybody out of business,” she said. “All we’re saying is, ‘Clean up your mess and do the right thing so people can enjoy their lives again. The technology is out there—put it on the ground.’”