From culinary diplomacy to feeding the resistance, people are turning to shared meals as a way to communicate across political and cultural divides. 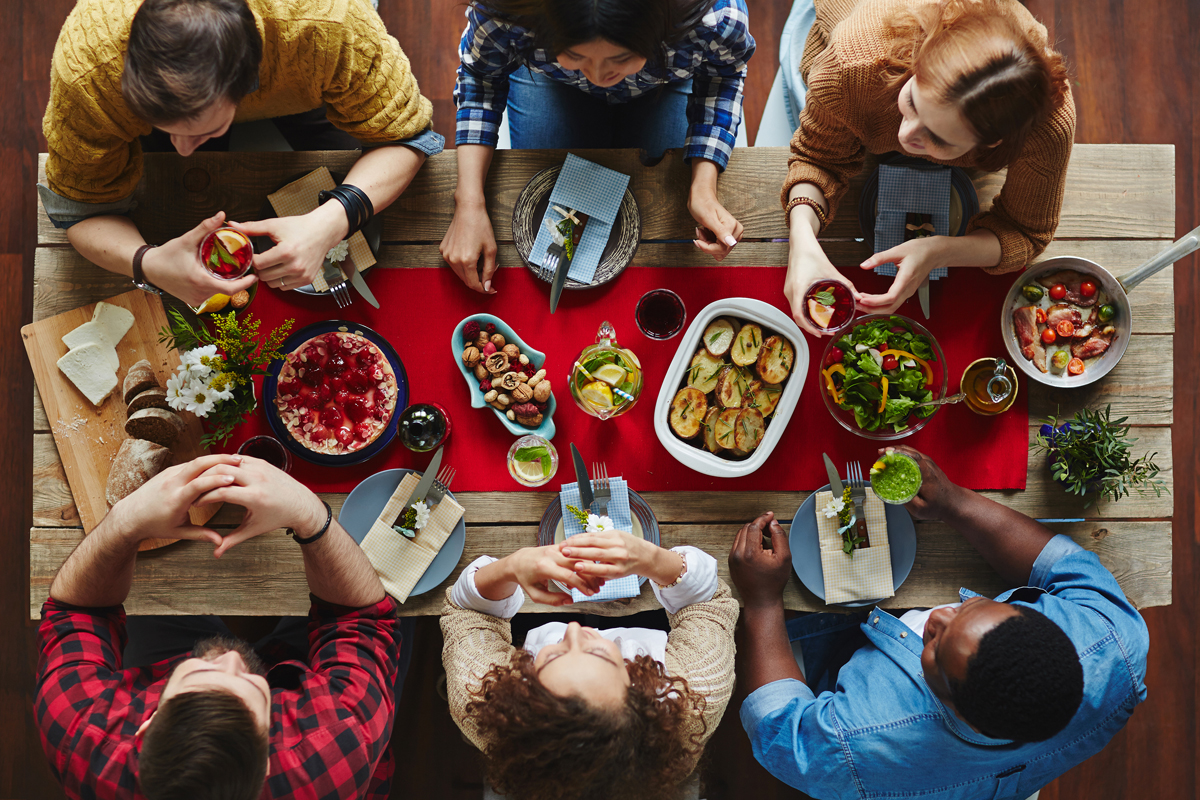 On a clear night last November, nearly one year after the 2016 election, 10 strangers ranging in age from 25 to 56 gathered in the dining room of a downtown Brooklyn apartment. The group, split evenly into self-identified conservatives and liberals, stacked their plates with spicy fish tacos, crisp tortilla chips, and creamy guacamole from the buffet.

As they took their seats at the table, a facilitator pulled out a deck of cards with questions about food and politics, including, “Does pineapple belong on a pizza?” and “Should there be stricter gun legislation?” Each attendee took turns drawing a card and then guessing what they thought the majority of the table would answer before launching into a discussion.

Nick Phillips, a second-year law student at New York University and lifelong Republican, drew his card and asked the group, “Should welfare recipients be required to take drug tests?” Anne Phelan, a playwright and liberal, readied an impassioned response between mouthfuls of tortilla and tilapia.

Phillips and Phelan are part of an emerging movement of people using dinner parties to provoke civil political discussion. An increasing number of groups recognize the importance of learning from those who think differently and they’re turning to food as a unifier. These organizations intend to use the positive feelings associated with meal time to make participants feel comfortable with one another and encourage them to hear new points of view without shutting down or lashing out.

Make America Dinner Again (MADA), a culinary diplomacy project, organized the Brooklyn dinner attended by Phillips and Phelan. The project was founded by Bay Area friends Justine Lee and Tria Chang as a reaction to how shocked they were by the results of the 2016 election. Anyone around the country can host a dinner using a downloadable template that includes ground rules, icebreakers, guided activities, and closing reflections. Over two dozen dinners have taken place since the group launched in early 2017.

Have these dinners been successful in fostering warm feelings between ideological adversaries? Tom Speaker, coordinator of the New York chapter, isn’t sure. “It’s not like we can measure what direct effect we have on polarization in terms of numbers,” explains Speaker. “All you can really measure are the stories.”

Scholar and author Sam Chapple-Sokol, inspired by stories of how food has been used to bridge divides, coined the term “culinary diplomacy” in 2012 to describe this phenomenon. His research focuses on the use of food to foster discussion and aid in negotiations. “The easiest way to win hearts and minds is through the stomach,” says Chapple-Sokol.

Anthony Bourdain, who passed away earlier this month at the age of 61, was famous for his belief that food can be a way to learn about other people and other cultures. “Meals make the society, hold the fabric together in lots of ways that were charming and interesting and intoxicating to me,” Bourdain said in an interview in 2001. “The perfect meal, or the best meals, occur in a context that frequently has very little to do with the food itself.”

Although the term used to describe these activities is new, using food to bring people together is not a novel idea. Today’s trends build on a history of culinary diplomacy. From Biblical times comes the phrase “breaking bread,” which can mean both sharing a meal and finding understanding between two parties. In more modern times, an article in the October 1959 issue of the Journal of Home Economics features a junior high class preparing international meals and eating together to “promote better understanding of other countries.”

More recently, the Diplomatic Culinary Partnership program was launched by the U.S. State Department in 2012 under Secretary of State Hillary Clinton. The high-profile initiative involved sending U.S. celebrity chefs around the world to cook at foreign embassies, host local dinners for the public, and collaborate with celebrated chefs in host countries. Lauren Bernstein, former director of the program from 2012 to 2017, saw it as a tool to soften both high-level diplomatic relationships and the perception of the American public as a whole. “We were able to reach so many people, because everyone loves food,” says Bernstein.

Culinary diplomacy is not without its critics. Sending wealthy chefs into other countries doesn’t necessarily accomplish much, according to Alina Dolea, a scholar of international communication at the University of California at Berkeley. In practice, this form of culinary diplomacy functions more like a glossy public relations campaign than a real attempt at dialogue, she writes in The Routledge Handbook of Critical Public Relations. She argues that the people who have access to the resources and events involved in this type of activity are often not the ones who are most in need of understanding.

Not everyone is as cynical as Dolea. One of the recent examples of culinary diplomacy is Conflict Kitchen, a restaurant in Pittsburgh founded by Carnegie Mellon University professor Jon Rubin and artist Dawn Weleski in 2010. By serving foods from countries with which the United States is in conflict, Conflict Kitchen aims to humanize these nations and reframe the discussion about how war affects civilian life. Rubin and Weleski rewrote the menu seven times to cover cuisines from Iran, Afghanistan, Cuba, North Korea, Palestine, Venezuela, and the Haudenosaunee Confederacy, an indigenous tribe from upstate New York.

The restaurant augments its activities by hosting events like “Join a Local Palestinian for Lunch,” aspiring to create connections between local residents and people from other cultures. Their methods contrast with the State Department initiative by keeping the food affordable and making the experience open to all, not just those with access and resources. For their work, Rubin and Weleski were nominated for an International Award for Public Art by The Institute for Public Art in Hong Kong.

Cookbook author Julia Turshen has also been a vocal advocate for using food as a tool for social justice and sparking discussion. Her bestselling 2017 cookbook Feed the Resistance provides recipes for physical and mental nourishment for activists, from chef Preeti Mistry’s tikka masala macaroni and cheese to an essay titled “How Food Can Impact Communities” by La Cocina’s Caleb Zigas. In April, Turshen launched Equity at the Table (EATT), a searchable online database of diverse voices in the food industry. “I plan to continue to use my work as a way to center marginalized voices and to shift the industry in a more equitable direction (not to be confused with a more equal one),” says Turshen. “I’m not interested in merely adding seats to the table – I’m invested in shifting who gets to do the inviting and the table setting.”

Some dinner parties are being used to challenge rather than comfort. Blackness in America is a series hosted by Nigerian chef and author Tunde Wey that explores themes like police brutality, sexism, and violence through the lens of race. From 2016 to 2017, Wey organized 20 intimate dinners attended by a mix of Black and non-Black people. To orient the discussion to his personal experience of being Black in America, Wey cooked and served a rotating menu of homestyle Nigerian food, including his favorite jollof rice flavored with scorching scotch bonnet peppers.

Unlike MADA and Conflict Kitchen, Wey’s goal with Blackness in America isn’t tied to generating warm and comfortable feelings. He wants diners to be speak honestly about tough topics, even if it’s difficult and stirs up painful emotions. “I think that discomfort can be instructive,” explains Wey. “I’m not actively seeking discomfort for my guests, but when you’re talking about uncomfortable things, and you’re talking about them honestly and in an intimate way, you’re bound to be uncomfortable.”

In his current project, named after Saartjie Baartman, a Black South African woman who was taken to Europe in the 1800s and paraded as a sexualized spectacle and oddity, Wey is tackling privilege and race. The venture began earlier this year as a month-long pop-up restaurant in New Orleans where patrons could choose to pay different amounts based on their race. In May, Wey hosted a series of four dinners in Detroit where diners experienced their meal differently based on a survey they filled out about their existing privilege.

All of these are modest, low-profile events. MADA is optimistic that their latest host will raise the group’s profile: Glenn Beck. Beck took an interest in MADA after reading an article about it in Forbes and seeing how it relates to his desire to continue political discourse and promote free speech. He hosted and filmed his own MADA event this past April and plans to host many more.

“Our first dinner modeled after MADA felt the way many Americans feel,” Beck told Civil Eats. “People feel that they aren’t being heard. Many power brokers have recognized this, but rarely do they ask, ‘who is actually and honestly listening without agenda?’ I hope we continue this trend to model how easy this really can be.”

Back in the Brooklyn dining room, Anne Phelan voiced her opinion that welfare recipients should not be drug tested, and to her surprise, conservative Nick Phillips agreed. While neither came away feeling like their minds had been changed about any of the issues they discussed, they both agreed that the group dinner setting changed the dynamic. “It was the least confrontational possible way to talk about this stuff,” says Phelan, “and the tacos were pretty good.”