For Farmers on SNAP, House Farm Bill Cuts Would Hurt in More Ways than One | Civil Eats

For Farmers on SNAP, House Farm Bill Cuts Would Hurt in More Ways than One

Many small farmers rely on food assistance to feed themselves and their families, and earn income from the same programs at farmers’ markets. 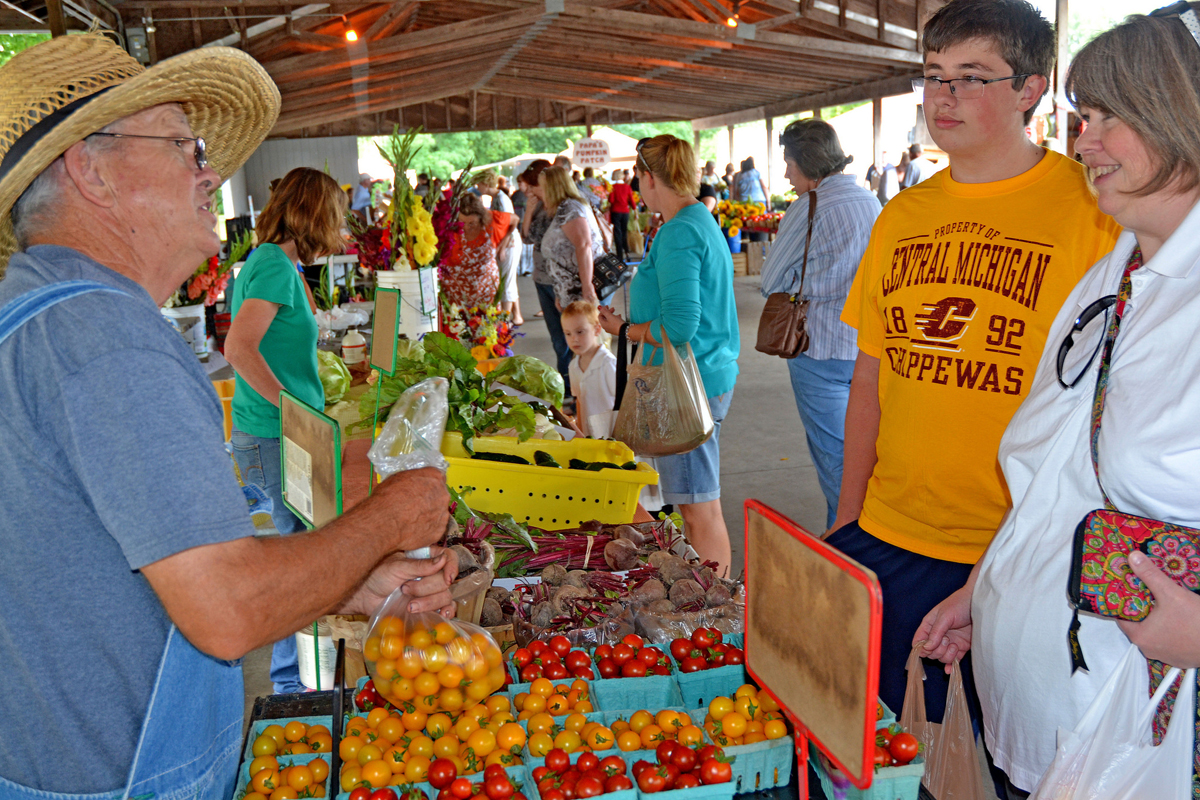 Jenni and Paul Callahan moved to Duncan, South Carolina in 2013 to fulfill a lifelong dream of farming. They left the political world of Washington, D.C., and established Harp & Shamrock Croft with the motto, “Small farm. Big promise.” The Callahans had anticipated this transition for years, and Paul held jobs off the farm until 2016. But in spite of their preparation and hard work, the Callahans found themselves struggling.

“We were having trouble paying the bills, so I looked at what we could do to lighten our load,” says Jenni. She decided to apply for food stamps from the Supplemental Nutrition Assistance Program (SNAP)—also known as food stamps—in early 2017, and qualified for nearly the maximum benefit for their family of six. In addition to the eggs, milk, vegetables, and meat they were able to get from their own farm, she says SNAP benefits let them buy more shelf-stable foods.

“I don’t care who you are, you have to have some things in a box,” she adds, “And so much of this is because we don’t have the time—it takes a lot of time to work the farm.” 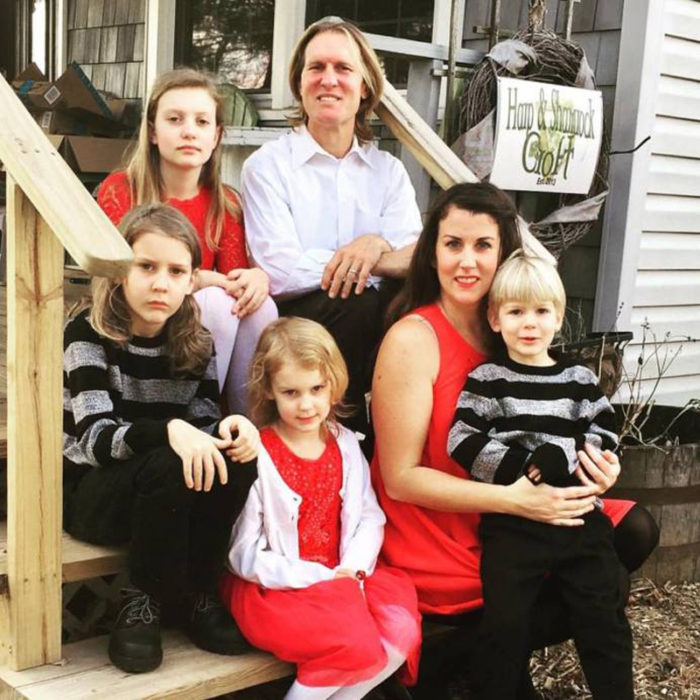 The Callahans in December 2017. (Photo courtesy of Harp & Shamrock Croft)

While there are no current statistics on how many farmers receive SNAP benefits, the rate of rural residents receiving food assistance rose from 12.5 percent to 16 percent from 2010 to 2015, exceeding the national average of 12.7 percent. Making a living exclusively from farming has proven difficult, if not impossible, for more than half of the farmers in the United States: According to the USDA, 61 percent of principal farm operators work off the farm at least part-time.

And farmers like the Callahans benefit from SNAP in more than one way: the recent rise in programs that match SNAP dollars at farmers’ markets in nearly every state has also brought in much-needed income for small and medium-scale farmers.

At the Hub City Farmers’ Market in nearby Spartanburg, South Carolina, Jenni alternates between selling produce to shoppers and spending her own SNAP benefits, which are worth double as a result of the state’s Healthy Bucks program. Jenni buys fruit, meat, and grains at the market in order to maximize her benefit while supporting her fellow farmers. “We sell at this particular market because it’s [run by] a nonprofit dedicated to reaching food deserts. Healthy food should be on everyone’s table, not just the wealthy,” she says.

As market sellers, the Callahans also accept SNAP from their customers. Last year, 10 to 15 percent of their profits came in the form of SNAP dollars, while this year that number has increased to 20 to 25 percent. Any loss of SNAP benefits would cause a huge financial impact, and while the Callahans have discussed how to make up for such a loss, they don’t have many options.

“Our plan is for our SNAP use to be temporary, but if the benefits went away suddenly, I don’t know what we’d do,” Jenni says. “We might consider raising more [animals for] meat, although right now we don’t have the space.” Not being able to support their family without the aid of SNAP is frustrating for the Callahans, who devote most of their time to working their farm and growing their business. “How do small businesses make it?” asks Jenni.

Heather Raines, market manager of Hub City Farmers’ Market, is very familiar with the two-pronged value SNAP provides farmers. “We have close to 300 regular SNAP users who would otherwise be unable to afford fresh, local produce,” she says, “And if requirements changed for SNAP, our farmers would lose $43,000 in income.”

The House farm bill, which is expected to face a second vote later this month, threatens to cut or do away with SNAP benefits for a sizable number of low-income Americans. It proposes that those who retain the benefits participate in work training programs—a shift that would require time that the Callahans and other farmers don’t have to spare.

Eligibility requirements would also be stricter, and a universal work requirement has been proposed. Under the current regulations, about 3.5 million people meet the “able-bodied adults” classification. Under the new bill, that number may double, requiring twice as many SNAP recipients to fulfill work requirements. Critics of the bill argue that these new requirements would make many SNAP recipients unable to keep up with the demands of the program, causing them to forfeit much-needed assistance.

The Senate’s draft farm bill, which was released last week and is expected to be discussed in committee today, largely leaves SNAP programs intact, which if the Senate approves it will set up a significant challenge to reconcile the Senate bill with the House version.

SNAP is a Lifeline 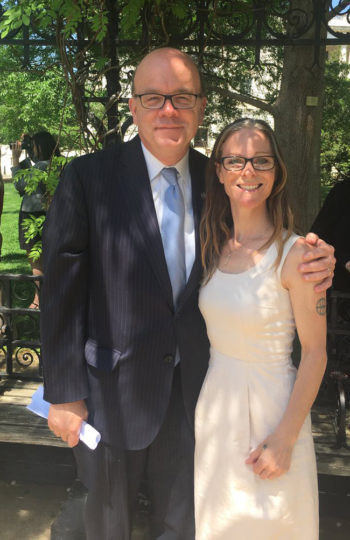 Meighen Lovelace, standing with Massachusetts congressman Jim McGovern as part of a National Farmers Union event in May 2018. (Photo courtesy of Meighen Lovelace)

Meighen Lovelace grows four different crops on two leased acres in Avon, Colorado, where she practices diversified growing, planting different crops at different times to make the most use of her land.

In 2008, Lovelace—who learned how to grow food from her mother—says her family was hit hard by the recession. At first she didn’t sign up for SNAP, because she thought she could find other ways to make ends meet, like turning down the heat in her family home instead.

“I would find it when doing the laundry,” she recalls. She worried that her children would become hoarders. “Once I utilized the [SNAP] program, I was able to afford my daughter’s medication,” she says.

Lovelace says she uses the benefits only when necessary. “This is a bridge program. I’m not going to be on it forever, but it’s my life right now. I don’t know what I would do without it,” she says.

As a farmer, Lovelace knows that every piece of food she grows is a dollar sign, and she works hard to maximize her profits, canning, pickling, and preserving food to sell in the off-season, since the Colorado growing season is so short. She says that during the growing season, putting in extra hours on doing job training to earn her SNAP benefits would be next to impossible.

Her local workforce center serves five counties and is currently closed because of a staffing shortage. Even online training would be difficult, since she is a single parent with limited time and access to broadband. 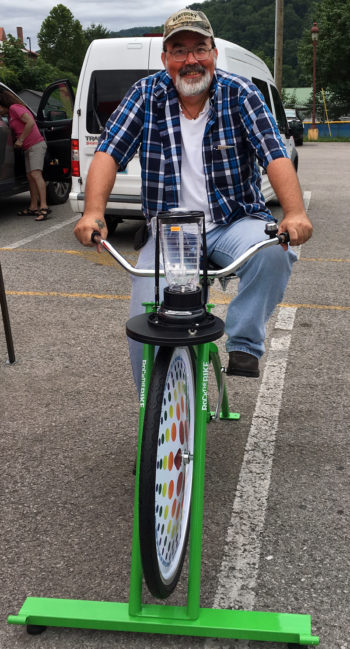 In Harlan, Kentucky, Woody Hartlove owned a motorcycle repair shop, until the closure of local coal mines dried up his business. He made ends meet doing odd jobs, but turned to farming two years ago, after his wife’s work hours were cut in half. What started as a small hobby farm became Hartlove’s business, with the help of the local extension office.

With only 1,000 square feet of farmland, Hartlove made $10,000 last year growing 18 crops and harvesting maple syrup. His goal is to acquire additional land, but in the meantime Hartlove and his wife rely on SNAP to supplement the food they grow for themselves.

Hartlove is also the farmers’ market manager for his county’s market, which is relatively new. At present, he says 10 to 15 percent of the customers use SNAP. “We don’t get a whole lot,” he says, “but it does help. If we lost it, it would put us in a bind.” And Hartlove expects the number of SNAP users to increase as the market grows.

“The next county over, 50 percent of customers use Kentucky Double Dollars tokens,” he says.

While Congress discusses their future, farmers like the Callahans, Lovelace, and Hartlove are all in the middle of a busy growing season. But the thought of having to live without SNAP is on all their minds.

As Lovelace sees it, the rhetoric behind the farm bill’s proposed requirements—which often paint a picture of misuse and sloth—tell a completely different story than what she’s seeing on the ground, where SNAP is key to survival for many, including those who grow our food. But if those changes become law, she says, “Children and elderly people will go hungry.” And farmers like her will likely be among the first to feel the sting.

Jenn Morson is a freelance reporter based in Maryland. Her work has appeared in The Washington Post, The Daily Beast, Vice, and others., Read more >