The Movement to Turn Church Land into Farmland | Civil Eats

The Movement to Turn Church Land into Farmland

A nascent movement of faith leaders, conservation experts, and food advocates are joining forces to connect young farmers to the vast quantity of land owned by churches. 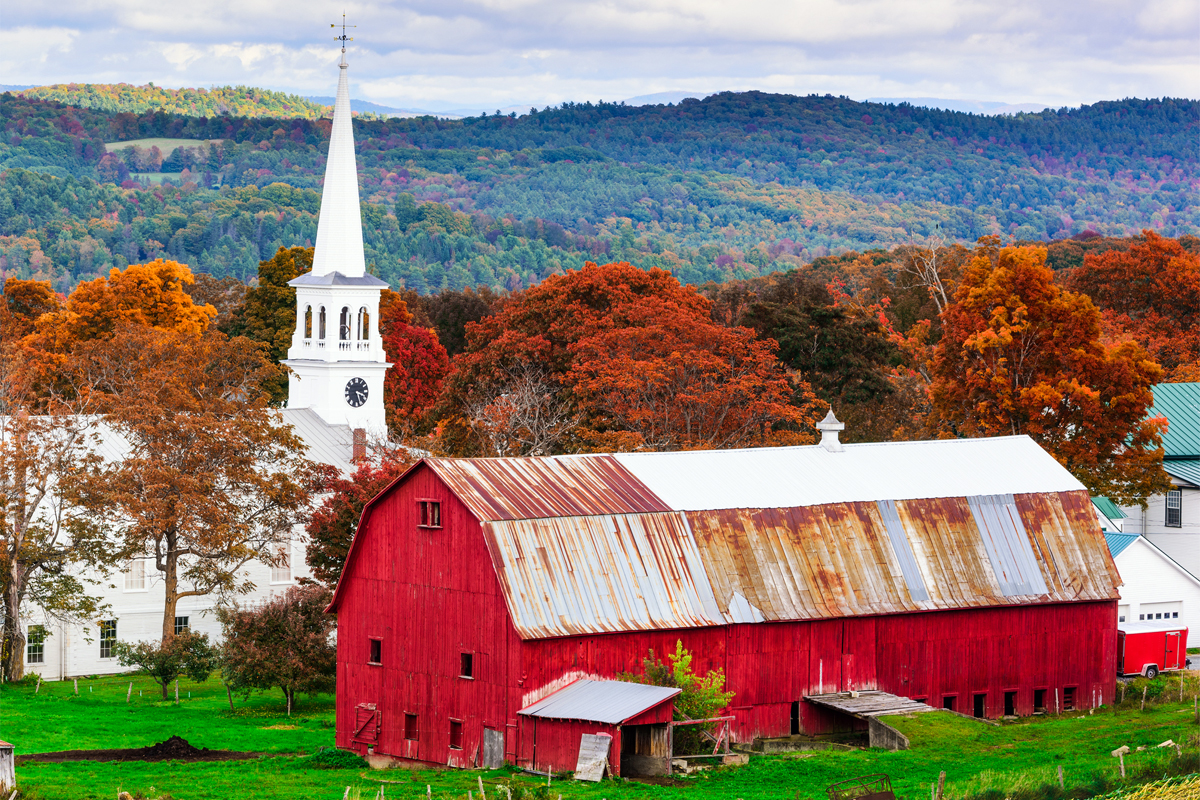 Originally from Bangladesh, Kashem launched his farming career at Florida International University. When a lease on state-owned land didn’t pan out, he turned his attention to an overgrown four-acre piece of land owned by the church he had attended with his wife Erin since 2013. The 28-year-old asked the church’s vestry if he might farm the land.

At first, some of the elders balked, but they eventually agreed to allow Kashem to sign a three-year-lease, which he hopes to extend to 10 years. In exchange, he promised the church 15 percent of the farm’s profits along with outreach through farm-to-table dinners and cooking classes. Some of the church members even helped him pay to fence off the land.

“As a much younger person, it was challenging to convince a very old congregation to see the benefits of farming—a lot of them associated it with poverty,” says Kashem. “At first, I was very upset—I mean, this is a barren field, and I’m trying to make it profitable for the church. I had to do my best to show them this is what I love to do.” 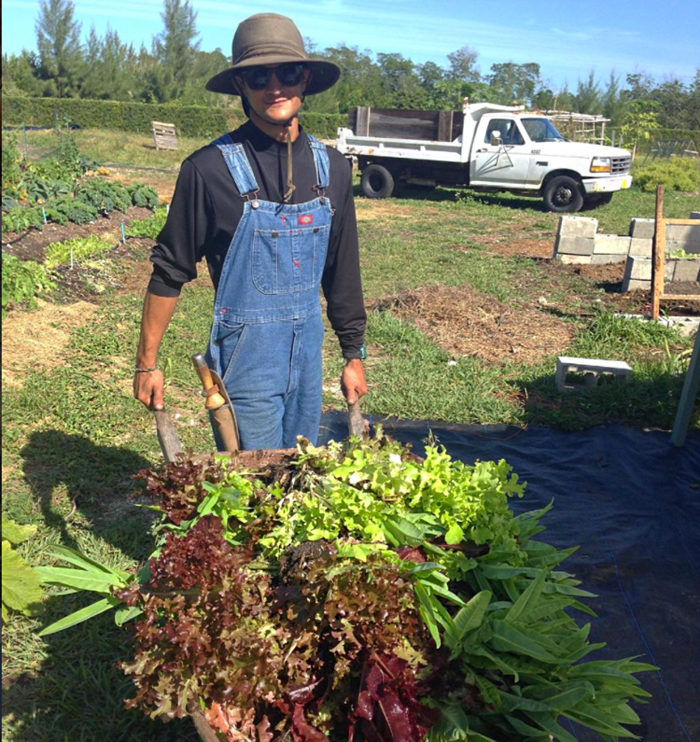 Across the nation and around the world, churches own untold millions of acres of land similar to the ones Kashem turned into St. Simons Farm. The Catholic Church alone owns an estimated 177 million acres globally, making it one of the largest nongovernmental landowners in the world. One Episcopal parish was revealed to own 14 acres of real estate in Manhattan, worth more than $2 billion, after a 2013 lawsuit forced the church’s council to become financially transparent.

But most church land holdings aren’t located in high-priced cities, they’re in countless rural locations from Maine to California—with land deeded over in wills by former parishioners or purchased over the years by church leaders.

“Religious bodies sit on a lot of legacy land,” says Reverend Nurya Love Parish, an Episcopal priest, sustainable food advocate, and a leader of a burgeoning Christian Food Movement. And yet, she points to the fact that, from a religious perspective, land “is part of Creation and needs to be managed with wisdom.”

In a sign that this movement is starting to gather steam, Parish, Kashem, and other members of a diverse array of religious communities gathered earlier this year at what is believed to be the first event focused on connecting farmers with land, in service to their communities.

The Interdenominational Movement to Connect Faith and Land

In March, 35 leaders from across the U.S. who are “working at the intersection of faith, ecological stewardship, and farming” gathered for the inaugural FaithLands event at Paicenes Ranch in California’s Central Valley. Within this ecosystem of faiths, the participants spent three days strategizing about how to inspire faith communities to use their land in ways that promote and strengthen ecological and human health, local and sustainable food and farming communities, and reparative justice.

“Nothing like this has happened before,” says Steve Schwartz, executive director of the Interfaith Sustainable Food Collaborative, and a member of FaithLand’s core organizing committee. “Sometimes when you see folks of different religions or denominations in the same room, they can’t avoid talking about where they differ. To lean in together to work on something we all care about—land stewardship and people making a living while feeding their neighbors—was a breath of fresh air.” 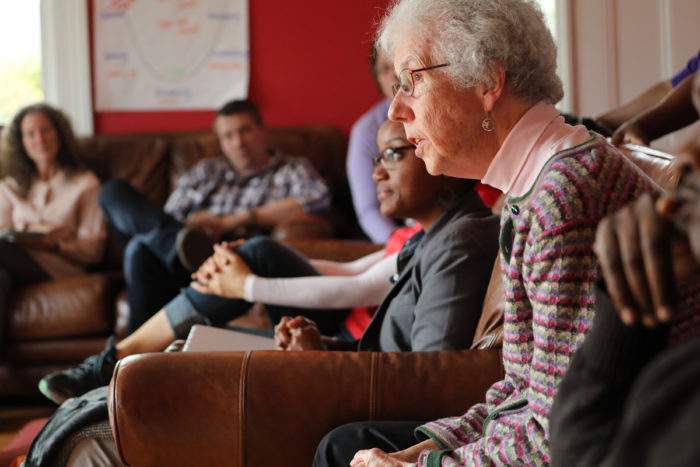 Attendees of the inaugural FaithLands event at Pacienes Ranch in California’s Central Valley. (Photo courtesy of The Greenhorns)

Schwartz has worked on solutions to the problem of land access since his days as the director of California FarmLink, which helps farmers—particularly beginning and immigrant farmers—gain access to land and financing. In 2017, he started to look into partnering farmers with faith-based organizations. Schwartz reached out to a longtime ally, Severine von Tscharner Fleming, director of The Greenhorns, a sustainable agriculture organization that advocates for young farmers.

“These partnerships were starting to form in various places, but the movement was missing infrastructure,” says Fleming. “We saw benefit in some sort of orientation, interpretation, sharing of stories, and networking.”

Fleming views churches as “untrained land trusts in biblical clothing,” in part because U.S. congregations, parishes, and dioceses aren’t required to pay taxes on their land.

As congregations across many faiths see their memberships get older—the average age of members of Anglican, Methodist, Episcopalian, and Presbyterian U.S. denominations is between 56 and 59—the question arises of what will happen to land owned by the church, especially in predominantly religious rural America, where the consolidation of agriculture has contributed to a shrinking economy and dwindling populations.

“As we experiment with new ways of stewarding, restoring, and accessing land, church-owned properties are a place for possibilities to unfold,” says Fleming.

The Greenhorns and Schwartz were joined in this effort by Reverend Nurya Love Parish, Kathy Ruhf from Land for Good, Andrew Kang Bartlett from the Presbyterian Hunger Program, and others. 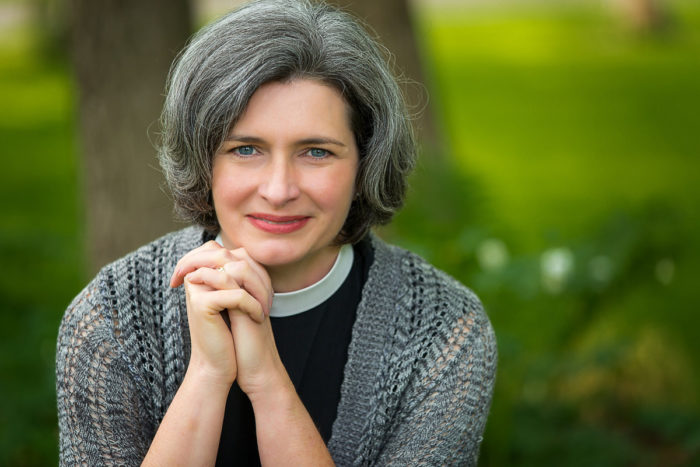 Three years ago, Parish created Plainsong Farm and Ministry with young farmers Mike and Bethany Edwardson on fallow acreage in Western Michigan. The land was owned by Parish’s family, but is sponsored by the church, and she’d like it to become a demonstration project for what’s possible on a wider scale. “It was 10 acres and a house,” she says. “The church has land like that hundreds and thousands of times over.”

Plainsong Farm focuses on one acre of bio-intensive and organic cultivation of vegetables, fruits, and herbs. In addition to a CSA, they host both secular public environmental education workshops and farm ministry programs. For Parish, the farm answers the question: “How do we tend our land as part of our natural growth in living into the values that we profess?” She’d also like to see religion renewed and reinvigorated by more direct engagement with land through food. 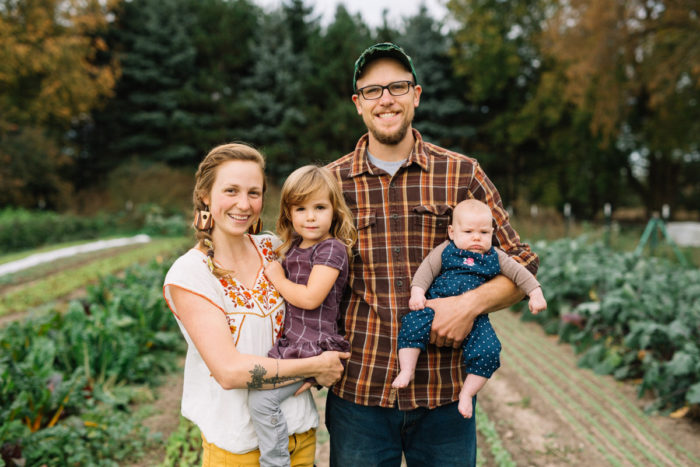 “Our scripture starts with Genesis in the garden and ends with Revelation in a garden in the city—with Jesus in the middle inviting us to a meal,” says Parish. “If we’re seeking to transform our food system in a way that’s going to be beneficial not only for ourselves, but for our great grandchildren, how can the church put [its] land into service?”

Jillian Hishaw attended FaithLands as an agricultural law expert and is the founder of Family Agriculture Resource Management Services (FARMS), an organization dedicated to helping Black farmers stay on their land. She commends the gathering for uniting diverse voices from the faith and sustainable food communities. She also asks why some people were left out of the conversation entirely.

“There weren’t any Native folks or tribes there,” says Hishaw. “At the end of the day, they were the original land holders. Is the church willing to gift back some of those land holdings that were originally owned by Native people?”

In Hishaw’s view, the church is a public service entity, meaning church-owned land is for public use, not just for its members. So who truly owns the land? “Vacant church lots, land, and buildings held tight by hierarchy and doctrine is squeezing the life out of the church,” wrote Hishaw in a blog post. “There is an urgent need to help the church transition to a new life. Personally, this is what the [FaithLands] convening symbolized to me.”

At the same time, Hishaw has seen firsthand the complexities of working with churches. She warns that the process can be hindered by restrictions and long timeframes due to protocol and leadership.

FaithLands attendees left with a list of commitments to pursue. The Greenhorns are creating a guide to working with local churches, and they’ll present on the topic at upcoming EcoFarm and Biodynamic Association conferences. Inspired by the New York City-based 596 Acres, a group of Catholics committed to mapping Catholic Church-owned land that might be suitable for sustainable agriculture, a steering committee coalesced to articulate the shared values and theological principles (across faith groups) that inform and inspire the FaithLands movement. And farmers like Moses Kashem will coach other beginning farmers on forming fruitful land partnerships with churches, especially when it comes to securing long-term leases.

Regardless of what comes of FaithLands, Reverend Parish says she’s awed by what she’s seen so far. And she thinks the nascent movement could mark the beginning of an important set of shifts in the way faith-based groups see land use.

“This is something that’s wide and large,” she says. “Nobody has the answers yet. It’s a discovery.”