Inside the Push to Bring Racial Equity to Land Grant Universities

Academics and food systems advocates are working from within public universities to acknowledge and address 150 years of structural racism. 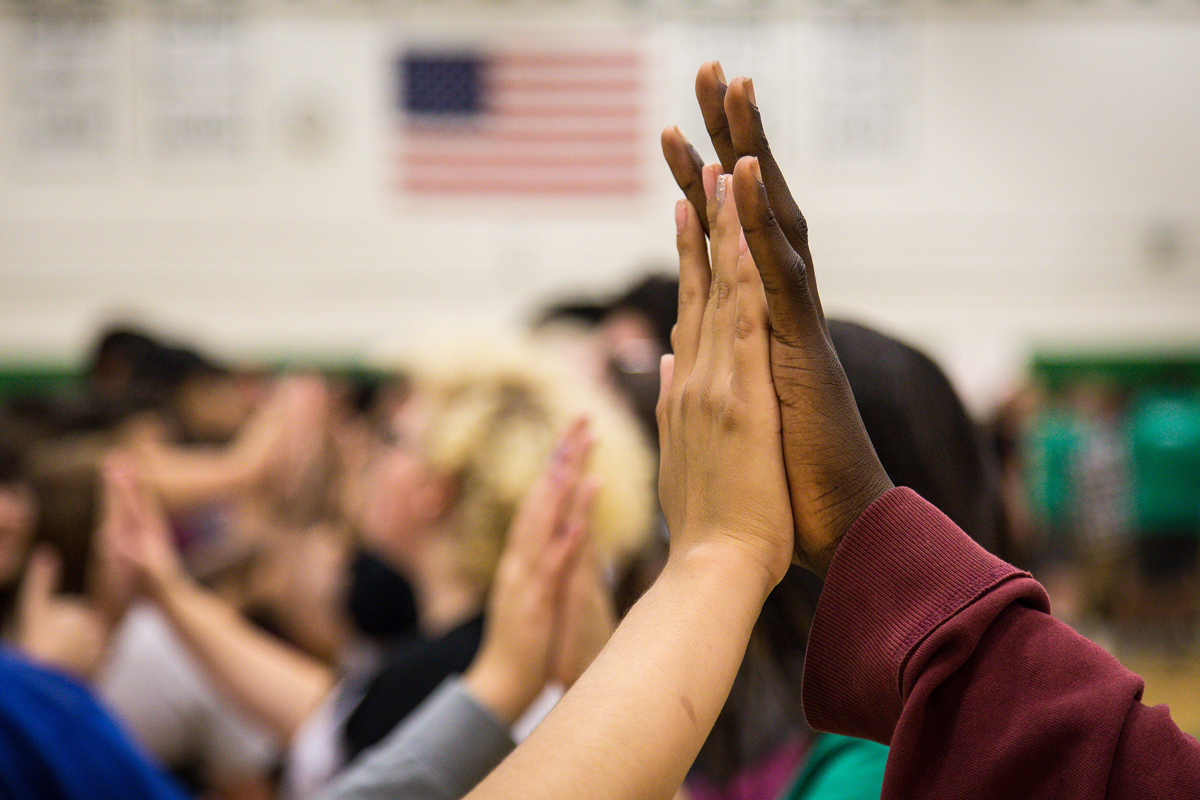 An underdog campaign is being waged among America’s public and land grant universities to address their history of racism and to prioritize the issues of racial equity and food justice.

The latest skirmish in this battle came after the publication of a May 2017 action plan known as “The Challenge of Change” report by prominent university, government, non-governmental organizations, and business leaders. The report examines how America’s 200-plus public and land grant universities—public schools established in the 19th century in all 50 states that cumulatively receive hundreds of millions of dollars in state and federal funding each year—can help meet global food and nutrition needs by 2050.

In detailing these issues, the report, however, left out these universities’ history of structural racism. Members of the Inter-Institutional Network for Food, Agriculture, and Sustainability (INFAS), who helped write the report, felt the urgent need to address it in a written response, directed specifically to the nation’s 76 public land grant universities.

“It was like this elephant in the room,” says Shorlette Ammons, an outreach coordinator with the Center for Environmental Farming Systems at North Carolina State University, who helped draft the response. “This lens of racial equity is necessary in order to do the work we want to do.”

Seeing public and land grant universities “through the lens of racial equity,” Ammons and her colleagues explain, means acknowledging the systemic racism that has powered America’s astounding agricultural productivity, and educated a workforce to make that possible. But that system also left—and still leaves—large swaths of the population out when it comes to reaping the benefits of the bounty.

A Long History of Systemic Racism

Beginning with the institution of slavery, this systemic racism continued under the Jim Crow South, the systematic denial of loans, grants, and land use to farmers of color, redlining minorities by denying them credit and entrée into certain communities, or patented and trademarked plant and animal varieties that shut out all but the biggest and wealthiest farmers from the benefits of higher yields. Over time, the group says, these practices have led to higher rates of food insecurity among people of color and households in cities and rural areas alike.

The shift this group is advocating might sound symbolic, but it has the potential to impact the way hundreds of thousands of students are educated every year.

Every state has at least one land grant university, and some states have a handful of them. They range from research powerhouses such as UC Davis, Cornell, Texas A&M, and Iowa State, to smaller schools offering reasonably priced public education, such as University of Vermont, Montana State University, and Alabama A&M. All were established to provide education to farmers, ranchers, and gardeners—and while they’ve all expanded greatly over the last century and a half, they still maintain food and farm-based research and education programs.

Most of the land grant universities date back to the 1862 Morrill Act, meaning they benefited from the millions of acres of land that the U.S. government gave away during the 19th century; in the South, many Black families were excluded from these benefits. The Act gave public land to the states, as long as the proceeds from those lands were used to establish at least one college that would teach agriculture and mechanical arts. The exclusion of Black farmers and students from these institutions was not rectified until Congress passed a law in 1890 that funded a separate set of land grant universities.

While acknowledging and targeting structural racism is the first step in tearing it down, Ammons says the enormity and complexity of the problem “is like an onion—there are so many layers.” Land grant universities “have benefitted from historical inequities over time,” she adds, “so I’m not sure that dismantling [those inequities] is the ultimate goal shared by all institutions. First, she adds, “we have to peel back layers of colonialism and capitalism.”

“The traditional approach at land grant universities,” explains Tom Kelly, executive director of the University of New Hampshire’s (UNH) pioneering Sustainability Institute and one of the co-authors of the response paper, has been to “filter out questions of politics and social values,” and see them as “lying outside the technical problem at hand.”

Where the more traditional land grant university approach focuses primarily on crop yield and agricultural productivity, Kelly and his like-minded colleagues advocate a shift toward “science that is deeply engaged … working with nonprofits, [grassroots] practitioners, businesses, and communities in a non-hierarchical way,” and recognizing the often minority, urban, or marginalized rural farmers they work with.”

One example of how structural racism is built into agricultural research programs is the way that research money and the knowledge it results in tend to stay within the agricultural academy. Even research that may extend into minority or poor rural communities tends not to be structured so that funds flow to the community leaders who are doing on-the-ground organizing and amassing valuable experience and expertise along the way, explains Joanna Friesner, the national network coordinator for INFAS.

For example, says Friesner, “There are a lot of grants to do soil science, but they don’t look too heavily at sharing resources with the community, or bringing in the knowledge of community thought-leaders.”

At the University of Wyoming, associate professor of community and public health Christine Porter is the principal investigator in projects focused on food dignity and growing tribal food resilience. Meanwhile, Tom Kelly has spearheaded fundraising for a million-dollar endowment at the UNH for a professorship in sustainable food systems.

The endowment generates $42,000 per year, which would typically be used to pay a professor’s salary. But the Sustainability Institute conceived it, says Kelly, “as a part-time professorship to support engaged work in the community.” This year, two grassroots organizers will share the professorship as a way of bringing them into the university and rewarding local practitioners.

And there’s the UNH-led initiative Food Solutions New England, a six-state network convened in 2010 and centered on its commitment to racial equity. At a time when few people of color held leadership positions in the good food movement, Food Solutions established three ambassador positions open to community food leaders.

Over the next three years, says Kelly, “the composition of who was in the room changed dramatically.” In Bridgeport, Connecticut, where more than 23 percent of residents are food insecure compared to the statewide average of 14 percent, ambassador Marilyn Moore worked on a roster of projects, including launching urban gardens, educating families on how to grow and cook healthy foods, and bringing healthy foods to urban convenience stores. Moore went on to become a Connecticut state senator in 2014.

Almost all of these projects are headed by members of INFAS, each working within their university to tear down the walls of structural racism with projects that prioritize both sustainability and racial equity. The next challenge, says Casey Hoy, professor of agricultural ecosystems management at Ohio State University (OSU), is figuring out how to connect these efforts, “to transition what we’re doing, or gradually shift it toward a national network.” He adds, “the issue of structural racism is pervasive in the United States, and none of us can tackle it on our own.”

Through conversations with colleagues at OSU’s Kirwan Institute for the Study of Race and Ethnicity, Hoy says he’s come to understand how “all of our civil rights gains in the past have been preceded by fairly careful scholarship to establish that there is a right and it is not being honored: fair housing, the right to education. For me, a conversation about the right to food would be a galvanizing objective for us [land grand universities] as a group, and for our nation. The assumption is that food is cheap, but according to the research so far, that depends on who you are and where you live.”

The range of community-based programs and initiatives underway at these universities suggests that agricultural educators and thinkers are taking heed. Jack Elliot, who heads Texas A&M University’s agricultural leadership, education, and communications department, and who chaired one of the working groups that produced the May 2017 “Challenge of Change” report, says he was impressed by participants’ “openness to moving forward.” In the last 10 to 15 years, he adds, he’s seen a new generation of scientists entering land grant and public universities who are “challenging traditional processes.”

At the group’s first meeting, where several INFAS members were present, Elliot recalls offering the committee the chance to “kick me out if you don’t like what I’m going to say.” He followed this by sharing his dislike for the premise of the working group’s title. “Whose ‘knowledge’ is it, anyway?’” he asked, calling for a more “participatory” approach. “You would have seen a huge sigh of relief, because I’m from Texas A&M,” Elliot adds, “and they’re thinking, ‘Man, this guy’s going to come in and be traditional.’”

It has been exactly a month since INFAS shared its response to “Challenge of Change” report’s commission members, and the group still hasn’t received a response. Anim Steel, executive director of Real Food Challenge, which campaigns for universities to shift their food procurement away from conventional industrial agriculture produce to local and sustainable sources, offers insight into the deep divisions that still exist between the two academic camps.

Some of the schools Steel and his team have approached, including some public land grant universities like the University of Vermont, have gladly made the switch to local food suppliers, despite its short growing season. Others, however, seem to be hamstrung by outside forces. Which universities make the switch and which don’t, says Steel, seems to “correlate with how embedded the Big Ag industry is with the universities.” He adds, “I have a bit of skepticism about programs that talk a lot about food insecurity, but don’t make the problem of massive corporate concentration in the industry an issue.” Still, he believes that the INFAS group’s “Deeper Challenge of Change,” report will make a difference.

“I’ve seen quite a lot of silence when it comes to these issues,” Steel says. “The first step will be to talk about why people aren’t talking about it. That’s very important.”

Correction: The article has been updated to correct the spelling of Anim Steel’s name.