When employees make decisions and advocate for themselves, good things happen. 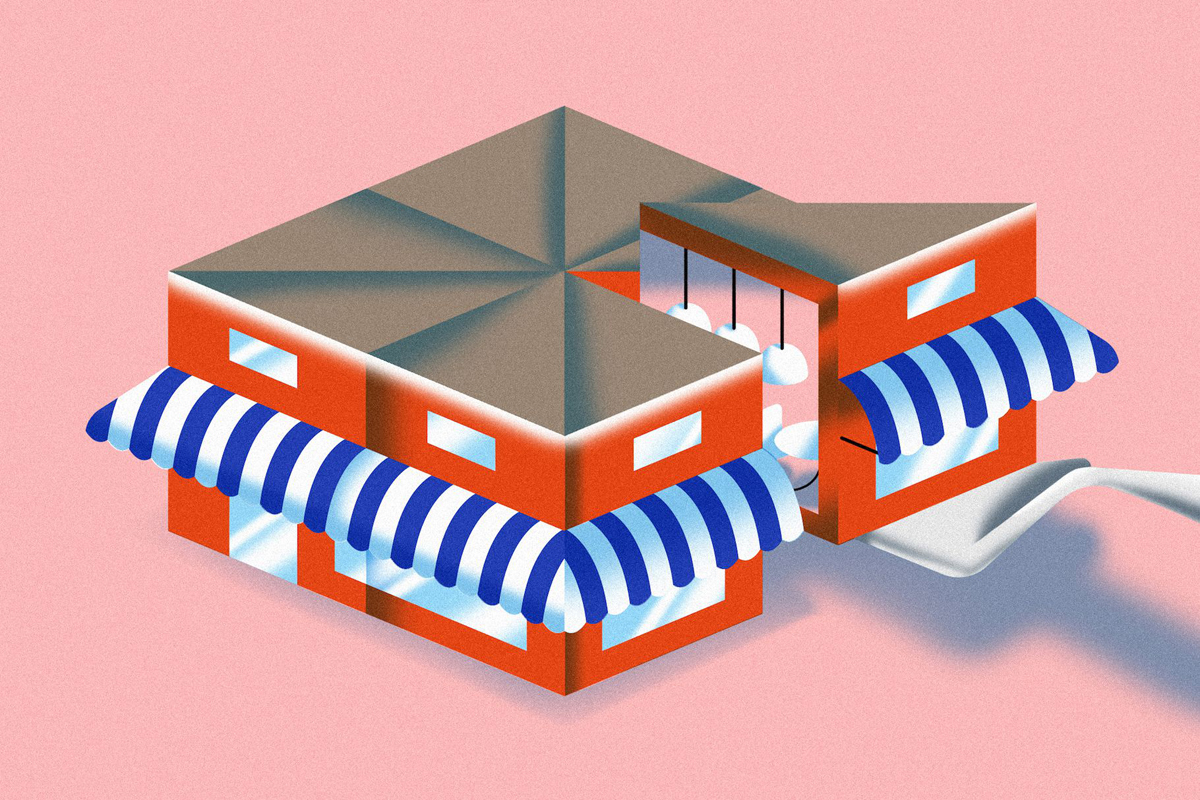 At Blue Scorcher in the seaside town of Astoria, Oregon, customers count on a few things. There’s, of course, the golden braids of challah and the crisp loaves of sourdough, but also those flaky pinwheel pastries that go so well with the cafe’s frothy honey-cardamom lattes. But for the workers who find their way to Blue Scorcher, the business means much more than artisan breads and a paycheck. “When people find a good match here it’s kind of magical,” says Joe Garrison, a founding partner in Blue Scorcher.

As a worker-owned cooperative bakery, Blue Scorcher offers employees opportunities to advocate for themselves and benefit directly from the business’s success. Garrison tells the story of a young job applicant who walked through the door four years ago. “He sat through the interview with his arms crossed and didn’t make much eye contact, but we hired him anyway,” Garrison recalls. Today, the same man is an excellent pastry baker, a co-owner in the bakery, and financial officer on the cooperative’s board. “I really think there’s something powerful with this [co-op] model,” Garrison says. “It engages people in a good way.”

The worker-owned cooperative model offers many benefits, says Melissa Hoover, an executive director for the non-profit cooperative advocacy group Democracy at Work Institute. Owners in the business get to accumulate capital. When the business is particularly profitable, the employees who helped make it successful get to share in those profits rather than seeing the money doled out to shareholders or upper management. Worker-owned cooperatives also empower people through governance, dispersing the power balance between employees and employers — something that’s become even more important in the era of #MeToo. “If you own and control this, you will have a greater degree of say over the kind of people who are in power,” Hoover says. “You’ll be able to control those conditions better.”

And for the restaurant industry in particular—famous for its long hours and low wages—co-ops promise better working conditions in general. “When the workers own the business, they tend to pay themselves a decent wage,” Hoover says. “They almost, across the board, [have] better benefits.” Workers also tend to build more on-the-job skills, because as owners, they’re cross-trained for a variety of roles within the business. That generally means a lower rate of employee turnover, a perennial issue in the restaurant industry. “There’s really strong data that [says] employees stay longer in worker co-ops and experience higher job satisfaction,” Hoover says.

So with some many voices in the industry calling for more better working conditions, why don’t more restaurants adopt this model?

The Democracy at Work Institute, which is associated with the U.S. Federation of Worker Cooperatives, estimates that restaurants and cafes account for roughly 13 percent of all 375 worker cooperatives currently operating across the country. The larger food industry, including food processing and production businesses like Alvarado Street Bakery and Ubuntu Coffee Roasting Cooperative, accounts for 22 percent — the highest concentration of any industry. A 2015 state of the sector report from the same group also found that food services made up a large portion of new or converted co-ops (those that transitioned to work-owned businesses from traditional business ownership models) that emerged in the previous two years.

“We are in a wave of growth right now,”, Hoover says. Worker-owned cooperatives, she says, have undergone several major “waves” over the last 40 years, each fueled by a different goal. In the 1970s, many newly formed cooperatives were tied to people desiring a counter-cultural lifestyle outside of traditional economies, but today, Hoover observes that more co-ops are being formed in response to economic stressors. “People don’t feel secure at their jobs anymore, and having ownership of something gives them security,” Hoover says. And some aging baby boomers implement co-op models as a way to keep their businesses open after retirement — by transferring ownership to employees.

At Arizmendi, a bustling group of Bay Area bakeries known for its sourdough chocolate croissants and vegetarian pizza slices, the employees manning the ovens and the cash registers are cooperative owners. Inspired by Berkeley’s beloved Cheese Board Collective, Arizmendi’s first location opened in Oakland nearly 21 years ago. Since then, it’s blossomed into six affiliate bakeries that exchange recipes but operate as independently run cooperatives.

Van Engel sees worker cooperatives as a remedy to many of the often-difficult working conditions at traditional restaurants: wages that keep 40 percent of restaurant employees below the poverty line, hierarchies that tend to marginalize women and people of color, and a lack of sick leave. “The restaurant industry treats its employees very poorly, and a cooperative is the exact antithesis of that,” she says. “It actually can be this pretty big transformation for some people, going [from being an employee] to being a business owner.” 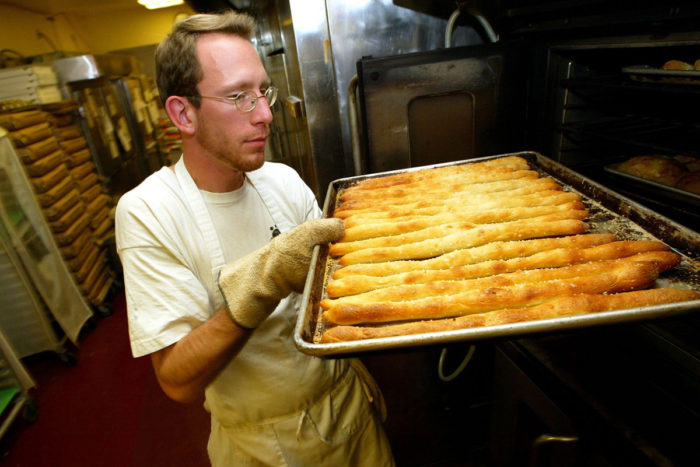 An employee at Arizmendi Bakery in 2003. The co-op now has six affiliate bakeries throughout the Bay Area. (Photo credit: Justin Sullivan/Getty Images)

With employees deciding how the business should be run and advocating for themselves, conditions and benefits often improve. “In a co-op we’re deciding what’s best for us, and we decided we’re going to take 50-minute breaks no matter what,” she says. “We decided to have really great health benefits,” such as health insurance and sick leave.

And because workers are setting the tone at worker-owned cooperatives, Van Engel says that often results in higher pay. Wages at Arizmendi bakery vary depending on the location and what each cooperative decides, but Van Engel estimates that employees at some bakeries make roughly $40 to $50 dollars per hour, including benefits and profit sharing. “It’s actually bordering on a living wage in the Bay Area,” she says.

Similar cooperatives have secured comparable benefits for staff. Whereas the state of Oregon’s minimum wage is $10.25 an hour, Blue Scorcher offers a flat wage of around $15 to $16 per hour including tips. At Austin’s Black Star Co-op brewery, employees start at around $12 per hour and receive pay increases after three months to $13.10 per hour — nearly twice the state’s standard minimum wage. Employees can pursue additional raises if they work towards a role on the managerial-level governing body called the Workers Assembly, which comprises roughly half of the brewery staff. In addition to the living wage, Black Star gives all employees paid time off, and staffers, regardless of their leadership role, are also empowered in the decision-making process. “We operate democratically, so there’s no one person making decisions,” says Black Star business team leader Jodi Mozeika.

Where cooperatives value collective ownership, many outsiders are put off by the prospect of a business that seemingly lacks a clear management hierarchy. “People think of collective or consensus decision making, and they’re afraid of that,” Hoover says. “They don’t necessarily see it as a benefit. They see it as, like, ‘Oh my gosh. Everybody’s going to be deciding everything; that’s not typically true.” Rather than relying solely on consensus voting, worker-owned cooperatives typically have committees and boards that help oversee company decisions. This helps the business stay nimble, while still giving employee-owners “more agency,” she says.

Still, fielding several opinions about policy changes does mean that decisions are, at times, made at a slower pace compared to a restaurant with an owner or CEO. At Black Star, a simple majority vote can result in a managerial decision. When a proposed change that’s pertinent to running the business is voted down, “it’ll be revised so that we find a plan that works best for us and for the business, and that process takes time,” Mozeika says. Smaller decisions are decided by a team leader council and larger policy decisions are made by a board that’s elected by Black Star’s membership community.

To avoid employees “blocking” important decisions, Blue Scorcher adopted a dynamic governance system when it fully transitioned into an employee-owned cooperative in 2012. Under the model, employees elect a representative to lead their department — known as a “department circle.” The leads are then charged with making quick daily decisions, such as making sure the bread department has enough flour to do their baking for the day. Those leads then attend group meetings with the other department leads, called the General Circle, where they discuss higher-level issues within the bakery. During the lead meetings, representatives are allowed to propose business changes.

With so many voices in the room, not all discussions are simple. “We’ve certainly stubbed our toes on all kinds of issues,” Garrison says. But Blue Scorcher’s sociocratic model forces the group to make decisions more quickly. A single employee, for example, can’t block a decision that’s approved by the group if the decision doesn’t violate the co-op’s bylaws. Garrison points to a suggestion several years ago, where a group of members felt that the coastal and entirely vegetarian bakery should start serving fish on its menu. “There were people strongly for and strongly against [it],” he recalls. Rather than making a quick decision that would alter the identity of the bakery, the group decided to survey customers. Following the 2011 Fukushima Daiichi nuclear power plant disaster off the Pacific Coast, the group ultimately decided to ax the fish plan.

But not surprisingly, worker-owned restaurant cooperatives face many of the same challenges as their more traditional counterparts. Founding cooperative members often share the rewards as well as the risks of starting a new business, Hoover says. “A single person may not be able to raise $100,000, but 10 people together might be able to, from their own resources and friends and family.”

Such was the case with Black Star, which was facing potential closure in early 2017 after several months of declining sales. “That cash crunch that we got into was a result of… the same struggles that all restaurants face, [which] is staying relevant in an ever-changing restaurant scene and brewery scene,” Mozeika says of the downturn. Where other restaurants might look for a new line of credit or into the owners’ own pockets to save the business, Black Star was able to turn to its 3,500-person membership community for help. While somewhat temporary, the call to action led to a boost in sales that ultimately saved the brewery and gave Black Star time to strategize. “Luckily we have the community to rally around us and a really strong membership base that wants to keep us open,” Mozeika says.

Beyond the regular challenges of running a food business, cooperatives also sometimes find it challenging to secure loans and investment. “Often restaurant investors want either some kind of control or they want a large return on investment,” Hoover says. “In a co-op, both of those things violate the principles of the co-op, [which] is that the members are the main beneficiaries and the members control it.” In these instances, co-ops will often form a third-party organization such as the Arizmendi Association of Cooperatives, which can establish the business and then transfer control to the cooperative.

While having more say in the running of a business can have its benefits, the model isn’t for everyone. “We’ve had several people who came in and were just gobsmacked when they realized that there was no clear boss and there was nobody to play the role of the sheriff,” Garrison says of Blue Scorcher. “If you’re not saying, ‘I’m ready to engage in a workplace that requires me to collaborate well,’ this is not the right workplace for you.”

For himself, though, Blue Scorcher’s co-op environment has been transformational. “It’s helped me encounter disagreements throughout my life in a more productive way,” Garrison says. “That business of yelling at each other and thinking, ‘I’m right and you’re wrong,’ it’s kind of miserable. There’s a better way to live, and that way is to collaborate.”

This article was originally published on May 21, 2018, in Eater, and is reprinted with permission of Vox Media, Inc.