Meet the Farmworkers Leading the #MeToo Fight For Workers Everywhere 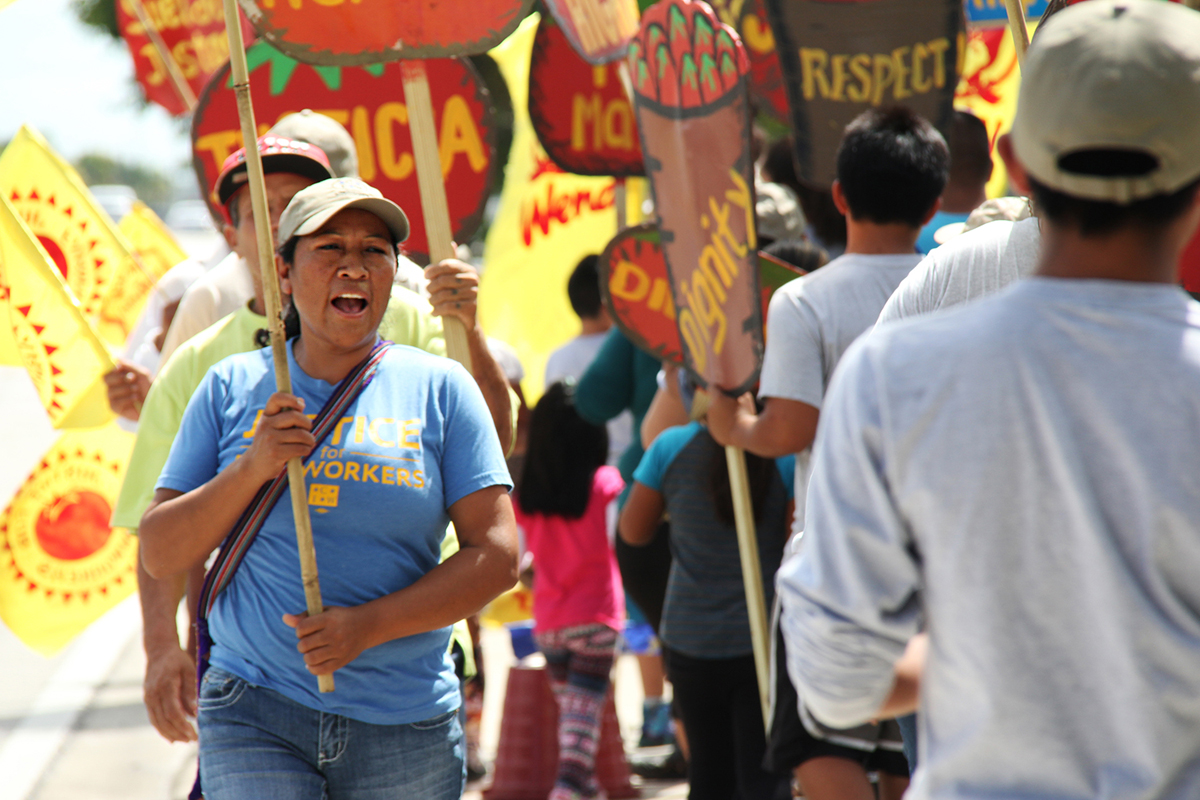 “Never again will we allow ourselves to be silenced as women … We will not permit our children’s lives to be limited by the greed of others because our children deserve a better future.” ~ Lupe Gonzalo, Coalition of Immokalee Workers leader, at the Time’s Up Wendy’s March

Raquel,* 12, is the daughter of tomato pickers in Immokalee, Florida. In March, she and her sister Maria* travelled to New York City with the Coalition of Immokalee Workers’ (CIW) five-day Freedom Fast, where they joined 100 farmworkers and 24 children of farmworkers in an effort to bring attention to the group’s campaign to urge Wendy’s to sign on to their Fair Food Program.

The group fasted on Park Avenue in Midtown Manhattan, sometimes chanting loudly, sometimes silently, some with their mouths covered by wide black tape. Even while hungry in the snow and rain, the fasters displayed bravery, conviction, and a grounded strength.

Raquel and Maria don’t work in the fields, although they did try it out when they were eight and 10. Their father disapproved of the idea, but the girls persisted and went to harvest tomatoes one day. “I thought I would like it but after the first day, I was like ‘No. I can’t believe people are doing this,’” Raquel says. “It’s like a nightmare.”

But the girls aren’t just disturbed by long days spent doing back-breaking labor. “Rape is one of my biggest fears,” says Raquel. “I’m haunted by the idea of it.” Maria says she is, too. And they’re not alone. 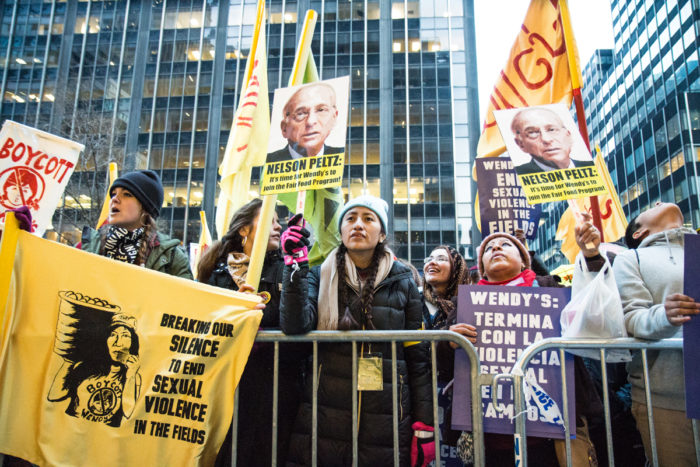 The 2,000-person Time’s Up Wendy’s March outside the Manhattan office of Nelson Peltz, Wendy’s board chair.

An estimated 500,000 women labor in U.S. fields. On many of the farms where Raquel’s parents worked up and down the East Coast, farmworkers describe coercion, catcalls, groping, and assault from crew leaders, supervisors, and even fellow workers as their “daily bread” in the fields. A study found that four out of five female farmworkers experience sexual violence at work. Women are often dependent on male supervisors for employment, housing, and transportation. Claims against harassers are largely processed by male managers, police officers, and judges, and retaliation for complaints is the norm.

Isolating physically and socially, the informal work environment of commercial agriculture on many farms creates a “hustle culture” that threatens workers’ immediate safety and long-term health. In crop work, for example, portable toilets are often placed far from the fields, a tactic that keeps them from taking breaks, said Nely Rodriguez, a CIW leader. Workers must obtain permission to use the bathroom, which creates uncomfortable situations as women find themselves alone with crew leaders. “It’s easy for unwanted things to happen between the rows. You’re in their territory, so it’s easy for them to find and entrap you. I saw this in my own case,” Rodriguez says, who felt corralled because her former boss carried a pistol.

CIW has sought to secure workers’ rights through the legal system and individual compensation. “We tried that first,” CIW leader Cruz Salucio explained during a workshop that he conducted with Silvia Perez on the Park Avenue sidewalk during the picket. “There were just [a small number of labor] inspectors in Florida monitoring the fields. They let farms know when they’d be visiting, so growers cleaned up the bathrooms and lunch areas before they came. Women didn’t feel comfortable raising problems with the monitors.” Salucio expressed similar concerns about corporate social responsibility programs that can fail to monitor and enforce standards.

The Freedom Fast called on Wendy’s—which has gone to great lengths to avoid signing on to the Fair Food Program, including shifting their supply chain to Mexico—to join farmworkers who have improved working conditions and wages in Florida’s $650 million tomato industry and in seven other states.

The vision of this immigrant worker-led human rights organization—to create a world without victims—also seeks to eradicate gender-based violence in U.S. agriculture and other industries throughout the world. Its Fair Food Program has been hailed in the Equal Employment Opportunity Commission’s Select Task Force on the Study of Harassment in the Workplace.

The program is also the first full-functioning example of a new model for protecting human rights for low-wage workers, dubbed “worker-driven social responsibility” (or “WSR” to distinguish it from the long-established practice of corporate social responsibility, “CSR”). CIW’s initiative was recognized by the United Nations Working Group on Business and Human Rights for its “smart mix” of tools, and received a 2015 Presidential Medal from President Obama.

The WSR approach is distinguished from CSR by the fact that its design emerges from the very community most affected by the exploitation it was created to prevent and extinguish. In Immokalee’s case, the Fair Food Program was built by and for workers like Rodriguez, Salucio, and Perez. This is important not so much for ideological as for practical reasons. 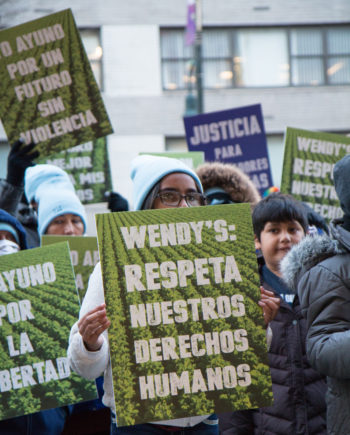 “The myriad ways in which perpetrators can be abusive is spectacularly creative—if you stop abuse in one place it pops up in another,” said Cathy Albisa, director of the National Economic & Social Rights Initiative, which houses a growing WSR Network, a coalition of worker and human rights organizations. “Only the worker knows all the different ways this happens and how to design a program that stops it.”

By rectifying long-standing power imbalances, WSR drills into the foundation of the problem, addressing multiple abuses simultaneously. No gender-based violence programs have achieved the same amount of leverage in fostering change, noted Albisa, who has been working in women’s and social justice movements for the past two decades.

A central mechanism of WSR is the enforcement of its standards through the application of strict market consequences for the most egregious human rights violations. In the case of the Fair Food Program, “zero tolerance” for abuses like slavery and sexual assault is backed up by a system of enforcement. Since the program was launched in 2011, seven growers were suspended for violations, 12 supervisors were terminated for sexual harassment, and 36 supervisors were disciplined for sexual harassment.

As Cruz Salucio explained, “It’s like we have a basket of apples, and we keep on removing the bad ones,” so the culture of worker health and safety keeps getting stronger. Credible threats of lost employment and business are potent incentives for industry-wide compliance that can lead to structural change. Disciplinary actions, supervisor re-training, and effective human resources stop the recurrence of violence, according to the Fair Food Standards Council, the program’s third-party monitoring body led by a former New York State Supreme Court Justice.

Grievance data on farms participating in the program reveal that, although the number of complaints has not gone down since the beginning of the program, the severity of complaints has lessened. Fair Food Standards Council investigators say that in the last eight years, they have received and investigated over 2,000 worker complaints and that the program has brought an end to impunity for discrimination and other forms of gender-based violence on participating farms.

Their just-released report indicates that there have been no reported cases of rape and attempted rape since the 2011 season, when the program was put in place, and cases of sexual harassment with physical contact by supervisors have been virtually eliminated (only one such case has been reported since 2013). Spending time with workers during Fair Food Standards Council audits reveals their confidence and eloquence as they speak to issues that concern them.

WSR in Other Industries

The Fair Food Program is not only improving the lives of farmworkers in Florida; it’s also serving as a blueprint for change in other industries.

When Migrant Justice was founded in response to the workplace death of a 20-year old dairy worker in 2009, it started with Teleayuda, a phone help line. Worker calls about abuse resulted in cumbersome processes with such obstacles as a lack of direct service providers, interpreters, farm access, and leverage with managers. Migrant Justice organizer Marita Canedo described the prior dynamic: “If something happens to you at work, call us and we can maybe do something.”

“Now,” she continues, “if there’s harassment or any kind of violence, workers can call the Milk with Dignity hotline, a Milk with Dignity Standards Council investigator will answer the phone in a language they understand and address the problem immediately. There are systems in place.” 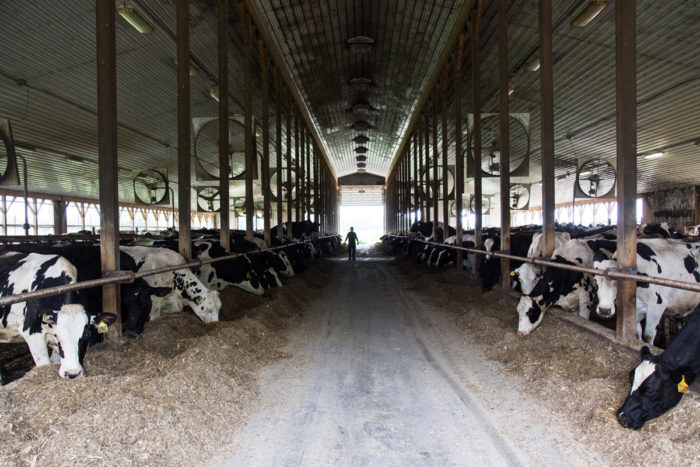 A look inside of a Vermont dairy barn.

Migrant Justice staffers report that the working conditions in Vermont’s dairy industry are rapidly improving. With Milk with Dignity, it will be safer for women to be on farms, so the organization brought on more women field organizers to educate and raise awareness about sexual violence. “I can feel the change in attitude and responses of women to abuses. It’s a new day. It’s really amazing,” added Canedo.

On the heels of Migrant Justice’s WSR launch, Model Alliance—an advocacy organization focused on combating sexual assault of the fashion industry—is consulting with CIW and the Worker Rights Consortium in the development of a code of conduct and enforcement regime based on the Fair Food Program. Though farm laborers and fashion models have very different work environments, women’s experiences of sexual misconduct are similar across industries.

“Unlike farmworkers, fashion models are highly visible, and while their job appears to be glamorous, the reality of models’ working lives can be far from it,” Model Alliance’s Executive Director Sara Ziff told Civil Eats. Working models experience chronic harassment, pressures to sacrifice their health to be thin, and lack of financial transparency and timely pay. In some cases, models are children working in debt to agencies. “Without clear penalties for violations and proper complaint and enforcement mechanisms, [efforts] fall short of protecting the people who are vulnerable to abuse.”

Echoing CIW leaders’ worries, Ziff observes that neither legal protections nor companies’ internal policies introduced in the wake of the #MeToo and Time’s Up movements have proven adequate to prevent assault. Model Alliance is turning to WSR as a model because of its legally binding commitments, education on rights and responsibilities, and productive complaint channels.

After the Freedom Fast

Despite the Fair Food Program’s proven track record for eliminating human rights violations in Florida’s tomato industry and the growing support and praise for the WSR model, Wendy’s board chairman Nelson Peltz refused to meet with CIW leaders during the five-day Freedom Fast. Peltz allowed his security guards to accept only two armfuls of petitions, a fraction of the 103,000 total. (CIW’s change.org petition now has over 117,000 signatures.)

Huddled against the cold in parkas and ponchos, Raquel was adamant about what brought her to the Freedom Fast. “My hope for women is that one day they will be able to find their voices, like us,” she said, “and take off the tape that’s preventing them from speaking… about the nightmare they’re going through.”

* The names of these girls have been changed to protect their privacy.