The Entrepreneur Making Healthy Food Accessible to Her Brooklyn Neighborhood 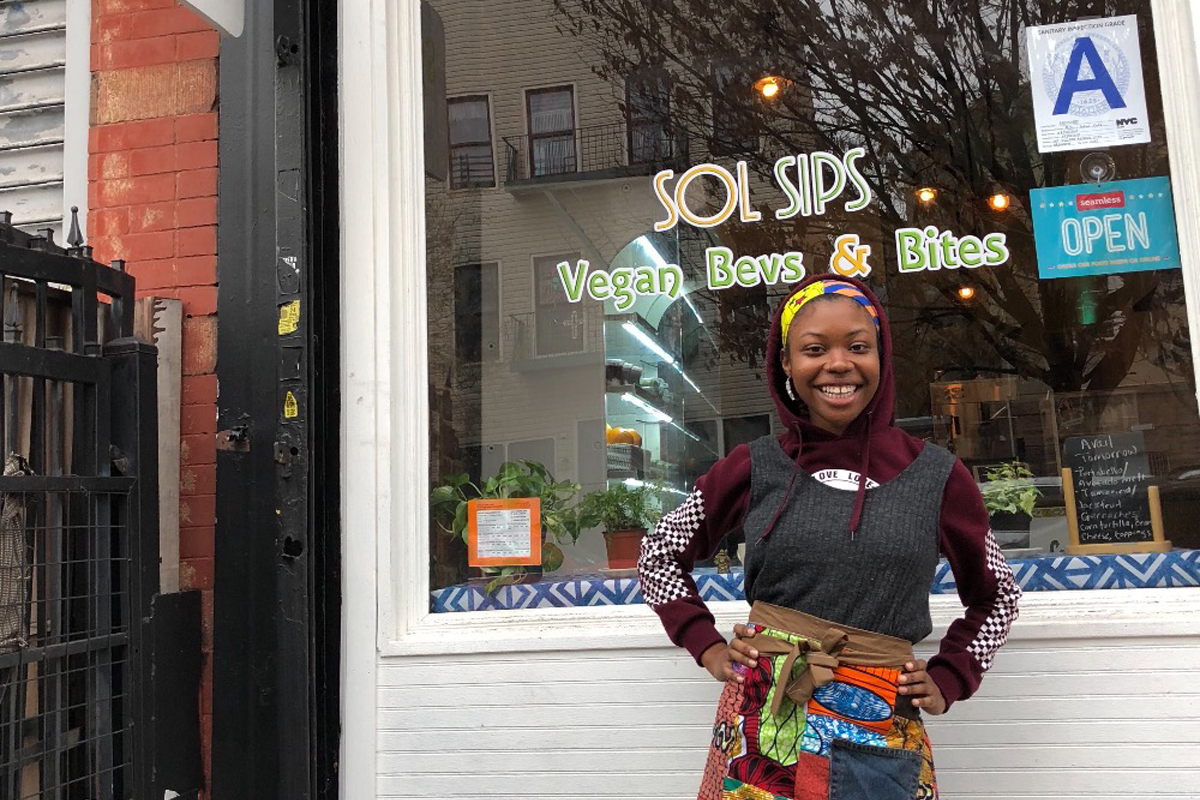 When she was 19, Francesca Chaney wrote in her journal that she wanted to open a vegan café. It would be a place, she imagined, where her friends and family could gather and eat plant-based food. For young people who are surrounded by organic grocers, boutique cafés, and fancy restaurants, that type of dream may seem easily within reach. But for Chaney, a native of East New York, Brooklyn, it meant envisioning a business unlike any of the bodegas and corner stores that occupied her community.

Two years later, her vision became a reality and Chaney opened her pop-up shop, Sol Sips, in the nearby neighborhood of Bushwick. But the community she hoped to serve didn’t show up. While there was rarely an empty seat in her café, she was frustrated by the lack of old-timers, families, and people of color like herself passing through the shop. “By the third week of the pop-up,” she says, “it was like a hipster spot. No one from the neighborhood was coming in.”

And so, one Saturday she tested out a brunch menu with sliding scale prices. And it worked; folks from the neighborhood started showing up.

“It just felt like a really, really good day,” she remembers of the first brunch, for which she created a special menu featuring a bacon, egg, and cheese sandwich, her friends’ old before-school favorite, but with modified ingredients—the bacon was tempeh, the eggs were made of chickpeas, and the cheese was dairy-free. “So many different people were coming through,” she says. “More indigenous people, more Latinx people, more Black people.” 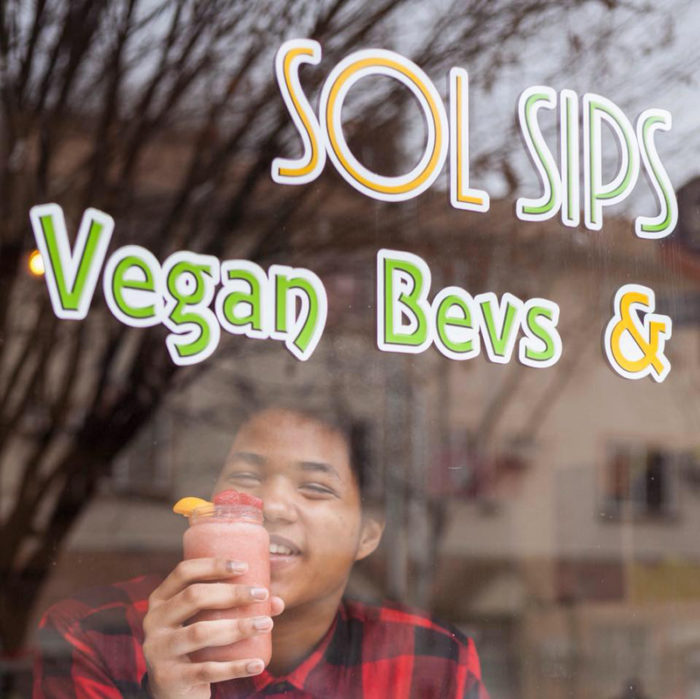 In April, Chaney made the popup location permanent, and the brunch has become so popular that she advises customers to call for a table before they arrive. After a wait at the register, the cashier asks, “How much would you like to pay?” For anywhere between $7 and $15, you can enjoy a main dish and drink that might otherwise have cost $20. Her goal for the weekly brunch? Making vegan food something that everyone can take part in.

“The work [Chaney] is doing should serve as an inspiration to all East New Yorkers and Brooklyn folks,” says Rafael L. Espinal, Jr., a New York City Councilmember representing Brooklyn’s 37th district. “It shows that no matter where you’re from, you are able to succeed.”

Getting Sol Sips off the ground was no easy task. With a yellow and green window sign that reads “Vegan Bevs & Bites,” the tiny café offers healthy food and drink at affordable prices and serves a community that has been largely ignored by the mainstream wellness movement. Chaney relies on two waffle irons and a hot plate with four burners to make all of the items on her menu. An array of herbs and roots in glass jars sit on shelves above a small prep space where Chaney chops vegetables.

While it serves drinks similar to those on other juice-bar menus, the space is completely its own. The cover of a children’s picture book propped prominently against one of the café’s exposed brick walls features a young Black girl dressed as a queen. A revolving array of Chaney’s friends’ artwork hang above the two-person tables squeezed into the long room.

In Bushwick, where nearly 90 percent of residents are people of color, one in five people are food insecure, meaning they face significant challenges in accessing enough healthy food. While shoppers on the Lower East Side of Manhattan enjoy 230 square feet of retail food space per 100 people, Bushwick residents have access to only half that amount.

There are also far fewer supermarkets there than in wealthier New York neighborhoods. To buy groceries, most Bushwick residents must travel to other neighborhoods reach stores with fresh produce. Even as grocers and food retailers come into neighborhoods like this, they often cater to the desires of the new residents who can afford expensive food. And while a new Whole Foods or Trader Joe’s in the neighborhood might mean more healthy options, a home’s proximity to those stores often raises property rates and prices out longtime residents.

Chaney wants her café to run counter to that trend.

“Chaney’s space plays an important role in demonstrating that businesses can succeed if they choose to run a socially conscious space that is sensitive to the demographics of the community,” Councilmember Espinal says. “It should serve as a model for how all new businesses operate in communities with a diverse population.”

Chaney is not the only one who is fighting to make vegan, health-conscious food more accessible. In Maryland, former engineer Jerri Evans quit her job and launched Turning Natural, an affordable juice bar in an area otherwise devoid of healthy options. Dell’z on the Macon in Charleston, South Carolina puts a price range next to each of their dishes. A note sprawled across the bottom of their large blackboard menu reads: “Pay what works for you!”

Closer to home, a range of businesses served as inspiration for Chaney as she envisioned her café. At the intersection of farming and activism, Soul Fire Farm in Petersburg, New York, subsidizes the cost of their produce and delivers CSA boxes to SNAP recipients, with the intent of ensuring that “no one is denied access to life-giving food due to their economic status.” Chaney credits Playground Coffee Shop—a Bed-Stuy establishment that hosts events by artists, poets, and activists—for helping her understand what an unconventional café could do with its space.

“I’m surrounded by these organizations and these people who are doing the groundwork to shift the narrative of representation,” Chaney says. “That type of energy has been a huge reaffirmation to me.”

Connecting with the Intended Clientele

In January, Chaney launched a GoFundMe crowdfunding campaign to help pay for supplies and renovations. Thanks to media buzz including an article in Essence, and support from her friends and family, she raised $4,000 of the $50,000 goal, and donations ranging from $5 to $500 continue to roll in. 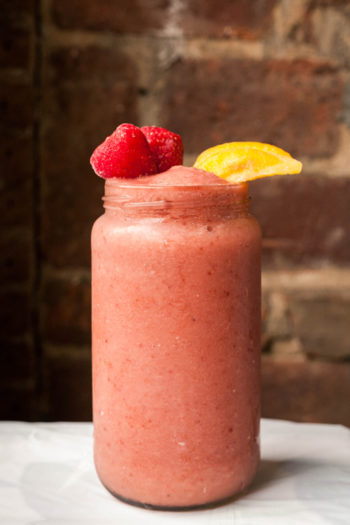 For now, Chaney wants to make sure the new café is running smoothly. But she’s already thinking about next steps. “Before the end of the year, I would really love to have another space like this in East New York,” closer to her home. From there, she imagines opening shop in Brownsville, and maybe even expanding her operation outside of New York. “Apparently we’re trending [on social media] in Berlin,” she says with a laugh.

Does Chaney ever feel overwhelmed by what she’s trying to accomplish? The truth is—yes. “I’m 21. I’m Black. I’m a woman. I’m also from a neighborhood that’s low-income, high-poverty,” she says. “There are times when those identities can become obstacles.”

But most of the time, Chaney doesn’t question herself. At Sol Sips’ recent ribbon cutting ceremony, a wave of supporters came to try the food. But, as Chaney was most excited to see, there were crowds of old-timers, families, and neighbors, chatting and enjoying the vegan bacon, egg, and cheese sandwiches.

Chaney’s goal, she says, was never to be the spokesperson for a movement. “I’m just creating a space where people can chill, not have to pay too much money, and enhance their quality of life a little,” she says. But on Saturdays, as a line of people winds out the door, it’s clear just how many people have been waiting for the space to exist.