Farmers Can’t Afford the Legal Help They Need. These Lawyers Are Mobilizing to Change That. | Civil Eats

Farmers Can’t Afford the Legal Help They Need. These Lawyers Are Mobilizing to Change That. 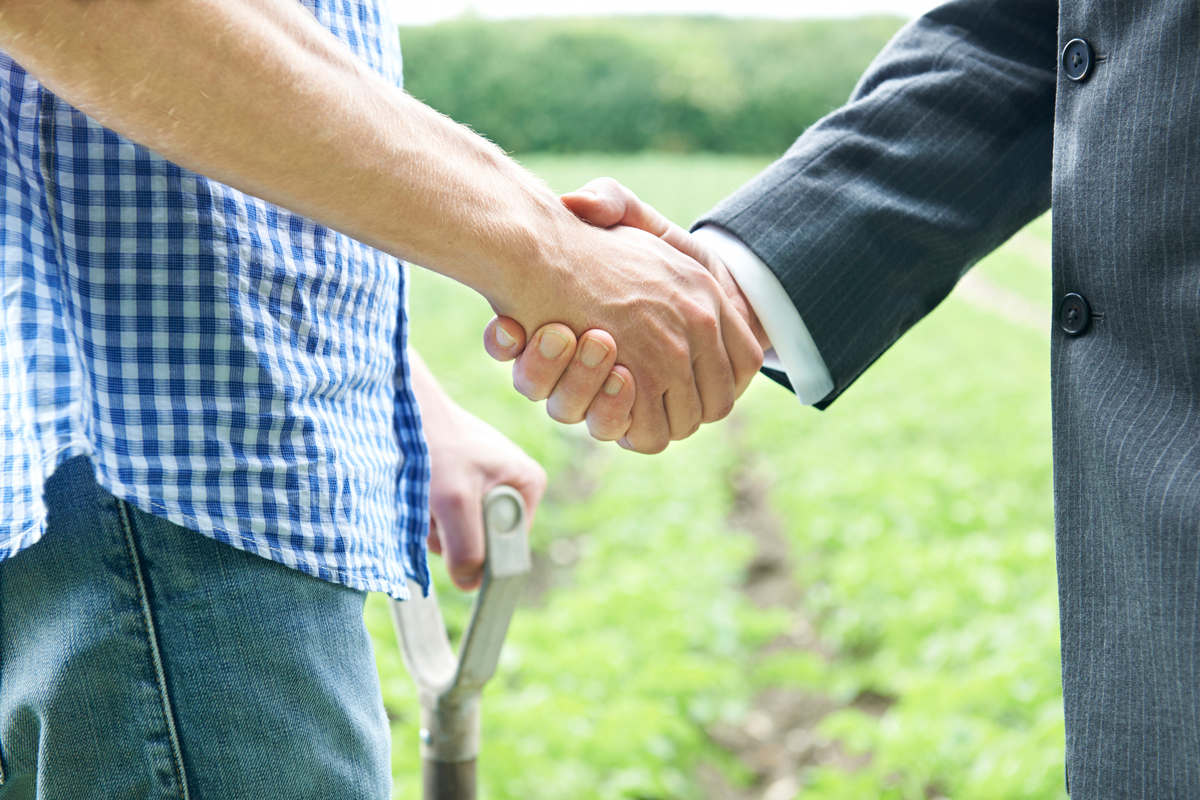 Corbin Hill Food Project founder Dennis Derryck believes that food justice depends on land justice, which is why he’s taking 95 acres of upstate New York farmland his organization owns and “turning it over to the community.” In the process, he’s tackling big, philosophical questions: “Who is the community? What should the land be used for? Shouldn’t the community itself answer that question?”

To make the project work, however, he also needed to ask some more mundane, practical questions, like: “What kind of legal structures exist for collective ownership?” Normally, Derryck says he would have pieced together ad-hoc legal advice, since Corbin Hill could not afford an attorney. But this time, he turned to a team of law students at the Pace Food and Beverage Law Clinic.

“They spent considerable time with us really helping us understand things like rules and regulations,” recalls Derryck. “They said, ‘We love what you want to do, but you’ve got to hear about all the things you’ll have to deal with,’”—like land easements and non-profit governance structures.

The clinic is the central piece of the Pace-NRDC Food Law Initiative, a program launched in 2015 in partnership with the Natural Resources Defense Council (NRDC) in New York City, to provide small farmers, food producers, and food activists with pro bono legal services. It’s also educating a new generation of food lawyers on the day-to-day legal issues that producers outside the industrial food system face.

“Legal services are a key part of the infrastructure for a sustainable regional food economy,” says Margot Pollans, the initiative’s faculty director.

While the clinic is the first law school initiative of its kind, it’s part of larger movement to make attorneys and legal information accessible to small farmers and food producers, who often end up trying to navigate complex issues—including labor policies, food safety regulations, contracts, and land transfers—on their own.

In addition to the Pace-NRDC initiative, The Legal Food Hub launched in Massachusetts in 2014 and now connects producers with pro bono lawyers throughout New England. And organizations like the Sustainable Economies Law Center and Farm Commons, along with other university law clinics, produce free legal guides and toolkits that address common challenges like establishing farm business structures and earning organic certification.

With her law students, Pollans says she emphasizes how critical legal help can be for good food businesses to survive. “The clinic is embedded in developing a regional food system … by thinking about systemic barriers,” she says. “Lack of legal services is one of those barriers.”

Getting a Food Law Clinic Off the Ground

While NRDC is better known for its national legal and advocacy work, the organization has been working on regional environmental issues in New York for the last 40 years. About eight years ago, when one of its teams started to focus on food and farm policy, a group of lawyers went on a “listening tour” to find out how they could better support the area’s producers, explains NRDC staff attorney Margaret Brown.

Right away, the lawyers heard requests for advice from the farmers. “We started to see that navigating the complex legal and regulatory landscape was hindering these farms, food businesses, and food justice organizations,” Brown says.

The farmers with whom the team spoke faced many barriers to getting help. Many were in remote rural areas where it was hard to access services, and some felt lawyers wouldn’t understand their operations. Most importantly, they couldn’t afford the steep fees associated with hiring an attorney.

After the initiative launched in 2015, the NRDC team presented the idea of a free clinic to Pace University, where Pollans had just arrived from UCLA School of Law’s Resnick Program for Food Law and Policy. Coming from UCLA—one of a few law schools with a food law clinic already up and running—Pollans was supportive of the idea.

But while the clinics that exist in places like Harvard Law School and Vermont Law School focused on some combination of food policy work and creating legal resources, Pollans saw a need for what lawyers call “transactional legal services.”

At Pace, the law students were invited to sit down across from a vegetable farmer and dive into his or her specific paperwork. “The way I characterize it is that some of the other clinics are doing the wholesale work, and we’re doing the retail work,” she says. “They both matter a lot.”

The new collaborative initiative consists of food law classes such as Food Systems and Environmental Law and Agriculture Law and the Environment, and an internship at NRDC. The Food Law Initiative launched the clinic as a two-year pilot project in January 2017, serving 12 clients and training 14 students its first year. While the two-year pilot ends at the end of 2018, the team is currently looking for funding to keep it running.

Jonathan Brown, the director of the clinic has been focused on getting the law students out to the farms to understand the real-world challenges of the businesses. They visited Essex Farm, for example—a 1,100-acre diversified farm in New York’s Champlain Valley that produces vegetables, meat, eggs, and more—where they helped farmer Mark Kimball create contracts for his CSA members.

Kimball operates his CSA differently than other farms, allowing members to select the food they need for their full diet for the week, plus extra to can and preserve when crops are flush, and asking for commitments through the end of each calendar year. “They came to the farm to see what it looked like,” Kimball says. “Being able to talk through these things with somebody so cognizant of how we’re different and what that looks like has been great. I can’t say enough about that.”

In the farming world, unprecedented business structures are common, which is one reason there’s a big need for help. “It’s a really exciting, fun area of law to practice, particularly because so many of the people we work with are trying new things,” Brown says. “There’s a lot of uncharted territory. “

The clinic also helped Back Paddock Farm in New Paltz negotiate a farmland lease with a landowner, and Common Ground Farm in Wappingers Falls develop procurement arrangements for a farm-to-school program.

Up north in New England, at least one other organization, the Conservation Law Foundation (CLF), is providing similar services via its Legal Food Hub. Instead of a university clinic, the hub is a website that connects small farmers and food businesses with law firms looking to do pro bono work. The hub now has 140 firms in four states in its network and has 305 cases completed—84 in 2017 alone.

In Rhode Island, for example, farmer Jayne Merner-Senecal contacted the Legal Food Hub to get help taking ownership of Earth Care Farm, a small, diversified organic farm her father started 40 years earlier. The hub matched her with an attorney who helped the farm create a succession plan.

The hub has also matched farmers looking for help with labor and employment policies and food companies working on business structures and trademarking. Senior attorney Jenny Rushlow, the director of the CLF’s Farm and Food Initiative, says the massive transfer of land as older farmers age out has created a lot of need for legal services.

“We have farmers that are aging out of farming, and the new generation, to the extent that there is one, is going to have a really tough time getting land,” she says. “All of those transitions require real estate attorneys at some point.”

Rushlow says handling producers’ requests has also helped expose areas in which attorneys are acutely needed. “There are almost no food safety attorneys in New England,” she says. “This is particularly problematic because the Food Safety Modernization Act regulations recently went into effect, and it’s certain that farmers and businesses are going to need legal advice. There is literally no one here who can do that.”

While the hub is hosting continuing education workshops for attorneys to try to fill those gaps, the issue points to the real need for university programs like the one at Pace, where lawyers are being trained from the get-go to handle the particulars of food and agriculture laws.

“Eventually, we hope to see a clinic like this in every region,” says NRDC’s Brown. “I don’t know that NRDC has to be the partner in each of those regions, but I think the model itself is a really great setup.”

Corbin Hill’s Dennis Derryck would agree. In the past, he cobbled together whatever legal advice he could find, and it often missed the mark. This time, he’s feeling confident about the future, thanks to the time and attention the Pace law students afforded him.

“They came in and understood who we were, what our values were, and how to frame the issue … and then began to ask the right questions.”