A lawsuit this week will call for the state to regulate confinement hog operations, following a landmark jury victory in a nuisance case against Smithfield in North Carolina. 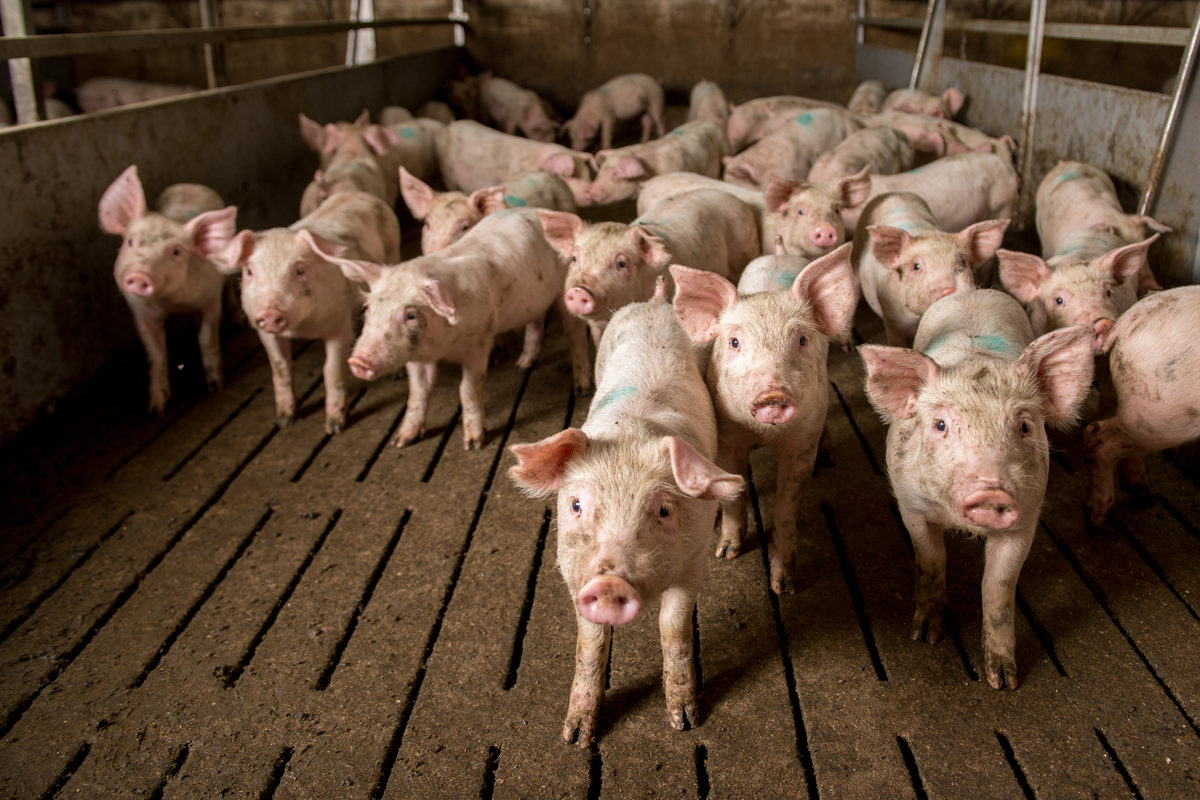 Most mornings, when teacher Birgitta Meade arrives at North Winneshiek School in rural Northeast Iowa, she’s hit by the stench of hog waste.

“The ammonia is sharp—you kind of feel it in the top of your nose and your throat, and it can give you a headache if you breathe in too much—whereas the hydrogen sulfide, you feel more on your tongue and in your lungs,” said the fifth- and sixth-grade science and social studies teacher.

The first factory farm in the vicinity was built less than a mile from the school 23 years ago, Meade said, and since then, a boom in other large hog barns has taken place. Today, Meade says that more than 25,000 animals are being raised within five miles of the school. “I have concerns about our youngest children, the pre-kindergarteners,” she said. “Their lungs are little, and they breathe faster than adults; I worry about their exposure.”

Hog waste from confined animal feeding operations (CAFOs) gets collected in large lagoons in states like North Carolina. But in Iowa and several other Midwestern states, the waste drops through slats in the floor and lands in a large storage pit, where it collects and cooks anaerobically for months between disposals. To prevent the resulting fumes from killing the animals, farms use giant fans to blow the noxious air out of the buildings around the clock. The problem? That air—and the waste particles it carries—ends in nearby communities like Meade’s.

After receiving no response to a petition they sent to the Iowa Department of Natural Resources (DNR), four residents in Meade’s region of Iowa plan to file a lawsuit against the agency this week, asking that it begin to regulate the air emissions from hog confinements under existing state law.

The Iowa lawsuit comes on the heels of a landmark verdict in the first of 26 nuisance cases filed by 500 Eastern North Carolina residents against Murphy-Brown LLC, a subsidiary of Chinese-owned Smithfield Foods, the world’s largest pork processor and hog producer, in federal court—and amidst a handful of other lawsuits against meat producers across the U.S. In all of these cases, residents are asking meat producers and their regulators to account for the damage they say the companies are causing to both people and the environment. 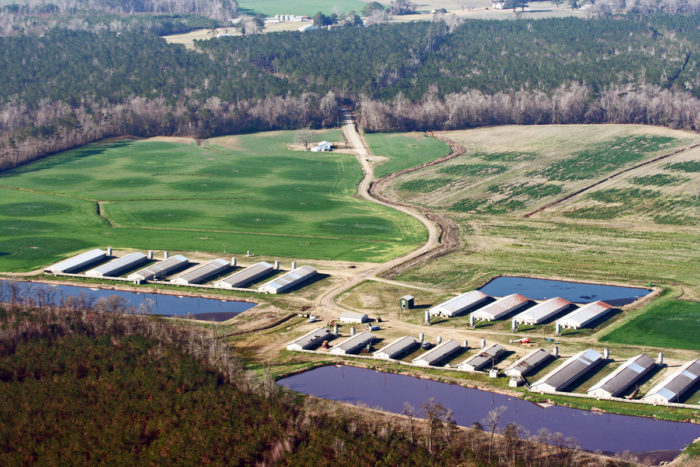 At a North Carolina hog CAFO, lagoons for waste sit on the banks of streams. (Photo courtesy of Waterkeeper Alliance)

Current Iowa state law requires that hog confinement operations keep manure inside the building it’s produced in between disposals, which generally involve trucking it away and knifing it in to cropland several inches beneath the surface of the soil.

The plaintiffs agree with the state’s definition of manure, which is “animal excreta or other commonly associated wastes of animals, including, but not limited to, bedding, litter, or feed losses.” And while the state regulates manure in liquid form, the plaintiffs hold that the facilities’ air emissions contain manure too—and should therefore be regulated as well.

“The compounds coming out of hog confinements—the hydrogen sulfide, ammonia, methane, carbon dioxide, antibiotic-resistant organisms, and particulates … all of this is being blown out in the air emissions,” said plaintiff Bob Watson, a Decorah resident who has long advocated for the protection of Iowans from the effects of factory farms. “By the state’s own definition, these confinements are in violation of law. What we’ve asked is that they issue a declaratory order stating such and start regulating them accordingly.”

The proliferation of CAFOs in Iowa, the top hog-producing state in the country, has led the Iowa Alliance for Responsible Agriculture (IARA) and state legislators to call for a moratorium on the expansion and construction of new animal feeding facilities until the number of impaired waterways decreases from 750 to less than 100, and until the state can strengthen the rules about CAFO siting.

Watson points out that Iowa CAFOs contribute to environmental problems that reach beyond state lines, like algae blooms and dead zones in the Gulf of Mexico. “This isn’t just an Iowa problem,” he said. “The pollution avenues affect the whole U.S.”

The recent verdict in the nuisance lawsuit against North Carolina pork giant Murphy-Brown originally offered hope to the Iowa plaintiffs, though soon after the original ruling, the “win” was substantially diminished.

On April 26, a North Carolina jury had ordered Smithfield to pay the 10 plaintiffs in McKinley v. Murphy-Brown LLC more than $50 million in damages for the nuisance the factory operation causes their community.

The plaintiffs, neighbors of Bladen County’s Kinlaw Farm, which contracts with Murphy-Brown to raise about 15,000 hogs, argued that the operation subjects them to a number of unpleasant and unhealthy ills, including sickening stenches, mists of wastewater drifting onto their properties, swarms of flies, and roadside “dead boxes” containing pig carcasses—all of which cause chronic illnesses, lower property values, decrease their quality of life, and lead to discomfort, anger, embarrassment, and fear.

Then, a little over a week after the jury’s ruling, the presiding federal judge reduced the damages to $3.25 million in compliance with a 1995 North Carolina law that caps punitive damages at three times the amount of compensatory damages or $250,000, whichever is greater. Now, plaintiffs will receive $325,000 each instead of the $5.075 million the jury intended.

“There’s no way $325,000 is going to fix [the NC plaintiffs’] situation or allow them to relocate somewhere else,” Watson said. What happened in North Carolina, he added, “makes our lawsuit that much more important, because we’re going after the regulatory process [itself].”

Danielle Diamond, interim director of field operations for Socially Responsible Agriculture Project (SRAP), said the original $50 million verdict “affirms and legitimizes what people in these communities have been going through for decades.” Even though the damages have been reduced, she continued, the case is still notable because court finally acknowledged that Smithfield operated with “willful and wanton” disregard of the plaintiff’s rights. “This is significant and should give the company and the hog industry in general pause,” she said.

While public opinion about the impact of CAFOs on their surroundings has changed over the last decade, government and regulators have not yet caught on, Diamond said. “All of the costs that this industry has to operate are being imposed on surrounding populations, on us, on taxpayers, on our health,” she said. And until companies have a financial incentive to make their practices more socially and environmentally responsible, little will change.

Given that Smithfield is a Chinese-owned company worth $13 billion, Diamond does not expect the lowered damage awards to change how they operate. “You have to hit these large companies in the pocketbook to make them blink,” Diamond said. “When this industry is forced to start internalizing some of those costs, that’s when things start to make more sense.”

Members of the public are standing up to meat production companies elsewhere in the country as well. In Tonopah, Arizona, for example, more than a dozen residents have filed a nuisance suit against the egg producer Hickman Family Farms, which houses 4 million birds, alleging the ammonia smell and profusion of flies resulting from the farm’s operations damage their quality of life.

Citizen groups have also begun to fight large animal facilities before they’re even built. Last year, residents in Tonganoxie, Kansas, launched a successful campaign against a Tyson Foods poultry complex planned for their community, and residents in Montana are lining up to oppose a proposal by Chinese mega-retailer JD.com to build the largest meat processing facility in the state.

Additionally, a group in Franklin County, Pennsylvania, is challenging the state Department of Environmental Protection’s granting of water quality and CAFO permits for Herbruck’s Poultry Ranch, which plans to build a $90 million cage-free egg-laying operation and bring 2.4 million egg-laying hens to the county.

Though citizens are increasingly standing up to large, confinement-based meat operations for the damage they inflict, they’re also facing resistance on multiple fronts. In the case of the Smithfield suit, Agriculture Secretary Sonny Perdue called the $50 million judgement “despicable,” and Keira Lombardo, senior vice president of corporate affairs for Smithfield Foods, described the lawsuits in a statement as “an outrageous attack on animal agriculture, rural North Carolina, and thousands of independent family farmers who own and operate contract farms.”

Legislation also often stands in the way: In North Carolina last year, for example, Republican lawmakers passed a law that limits the compensation plaintiffs can receive when suing commercial hog farms to a sum related to the diminished value of their property—prohibiting compensation for damages related to health, quality of life, enjoyment of property, or lost income.

Diamond said she has seen little progress in cases trying to influence governmental entities and agencies to take a stronger regulatory stance with CAFOs. “In my opinion, this in large part due to the blurred lines between [both] the regulated and regulators,” i.e., agri-business interests and government interests. “They all seem to be playing on the same side of the net, while the public’s interests are being plundered on the other side.”

Watson in Iowa points out that historically, when farmers raised hogs outside on the land, their manure was not a toxic substance. It was not concentrated in anaerobic environment, and it didn’t contain antibiotics or hormones either. Modern-day CAFOs call for new regulations, he continued, because companies such as Smithfield and Murphy-Brown have dramatically changed the way animals are raised.

“Because they put these animals in the buildings, it is no longer a natural setting for manure to break down outside,” Watson said. In an environment free from oxygen, he adds, manure “breaks down into different constituent parts than it would in a natural setting.”

Additionally, a 2014 Johns Hopkins study by Jillian Fry, to be submitted with the Iowa lawsuit, points out that the state agencies charged with regulating hog waste do not have a primary mandate related to public health. “The departments that should be regulating aren’t,” Watson said, “and the departments that are regulating have nothing to do with human health or quality of life.”

The plaintiffs plan to file the lawsuit with the Polk County District Court in Des Moines this Thursday. The suit does not advocate for any particular type of regulation. “I just want to give the DNR a chance to actually regulate the laws that exist rather than me telling them what they’re going to need to do,” Watson said.

In response to questions about the lawsuit, the Iowa DNR offered no comment.

Meade, the teacher at of North Winneshiek School, said the pollution expelled by the CAFOs surrounding the school take a toll on her students. In addition to the physical effects, she said, “there’s an emotional toll from being told you have to live in shit all the time because your neighbor wants to make a buck—it’s demeaning.”

She hopes the new lawsuit will force companies to take responsibility for the pollution they produce. “This idea that we have to feed the world… Well, at what price? Sacrificing our children’s health? There are ways to raise meat without poisoning your neighbors.”

Top photo: Piglets on a slatted floor like those used in Iowa CAFOs. (Photo credit: agnormark)