What Could the Next Farm Bill Mean for the Organic Program? | Civil Eats

What Could the Next Farm Bill Mean for the Organic Program?

Congress granted the National Organic Standards Board authority in 1990 to shape the organic label and decide which chemicals farmers can use. Now some lawmakers are pushing changes that could dismantle it. 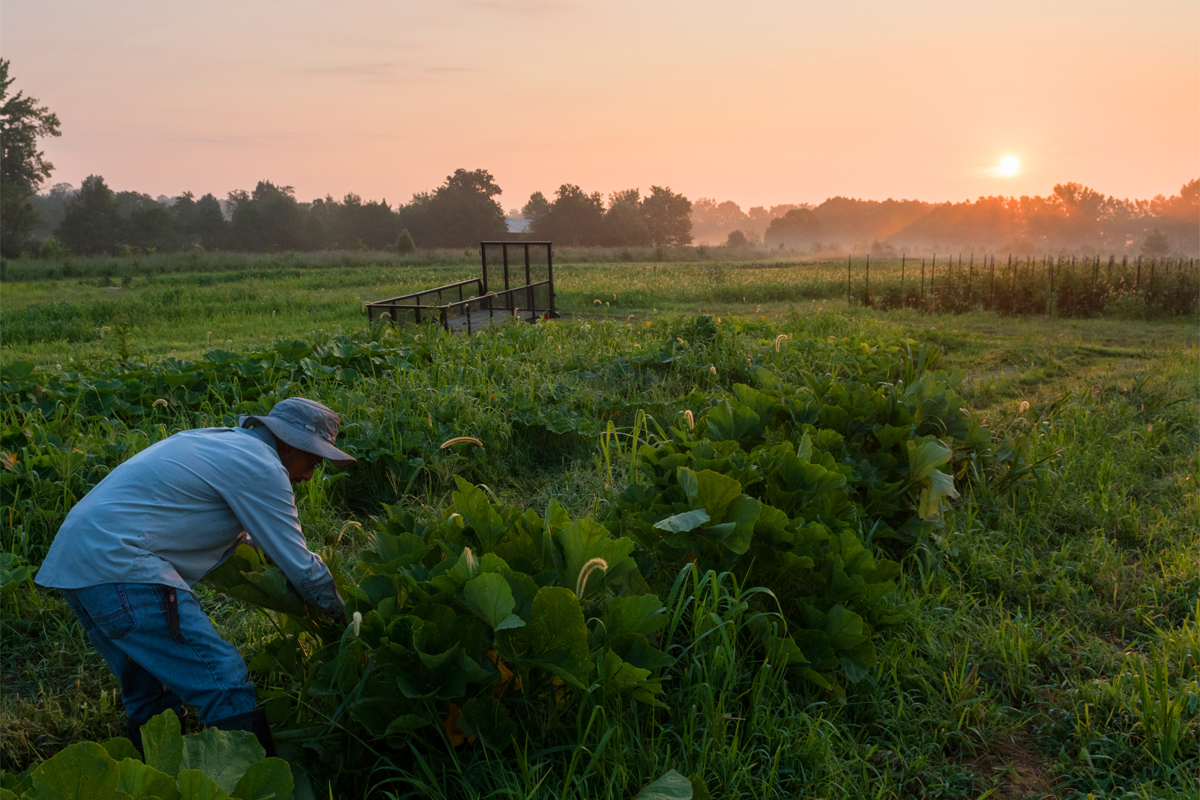 It has been a rough few years for the organic label. From scandals over fraudulent organic grain imports and the revelation of several factory-scale farms producing certified organic milk and eggs, to controversy around the inclusion of hydroponic or “soilless” farming and the reversal of comprehensive animal welfare rules, not to mention last week’s termination of the organic checkoff proposal, one thing is clear: The organic industry’s rapid growth may also turn out to be its downfall.

Organic is the fastest-growing retail segment, valued at $50 billion per year, and an increasing number of multinational corporations want a piece of the pie, leaving the integrity of the U.S. Department of Agriculture’s (USDA) certified organic seal in question. In fact, organic agriculture is so fractured that several groups of organic farmers and advocates have begun to create alternative labels to realign with what they believe is the original intent of USDA Organic.

Now, organic certification faces an attack from Congress, which has proposed re-shaping the National Organic Standards Board (NOSB), the citizen group that oversees organic regulations. By allowing more corporate entities to evaluate the organic label and decide which farm chemicals and other inputs farmers are allowed to use on their organic fields, industry insiders worry the proposed changes could further erode the strict standards of organic production that distinguished it from conventional agriculture and built a thriving market.

Given the strife over organic regulations within the USDA and the building pressure from agribusiness lobbyists on Congress, could this farm bill weaken organics to the breaking point?

What is the NOSB?

The Organic Foods Production Act (OFPA) created the organic program in 1990, with the intention of launching a national certification program that represented the highest standards of organic agriculture. It’s a voluntary program, and farmers bear the costs of becoming certified and paying for annual on-farm inspections. In exchange for following a strict set of standards that set them apart from conventional agriculture, they can affix the USDA Organic seal to their products that garner higher prices in the market.

Congress originally created the NOSB in 1990 to oversee the National Organic Program (NOP) on the growing, processing, and handling of organic products. Comprised of 15 volunteer members appointed by the Secretary of Agriculture for five-year terms, the board currently must include four farmers, three environmentalists, three consumer representatives, two organic handlers, a retailer, a certifier, and one expert in toxicology, ecology, or biochemistry. These quotas were designed to ensure balanced representation, instill trust in the process, and protect the principles of organic agriculture from special interests.

“The NOSB gets critiqued on all sides,” said NOSB member Tom Chapman, who said that the board gets accused of simultaneously being stacked with agribusiness reps and small organic producers, depending on who you ask. “It’s reflective of the fact that we have such diverse stakeholders,” he added.

Congress is proposing two big changes to the NOSB: Allowing employees of organic farmers or producers to be permitted to occupy board positions, and allowing politicians to sidestep the NOSB’s authority to approve substances such as the fertilizers and pesticides used in organic production—changes that raise alarms for some in the organic industry.

On April 18, the House Committee on Agriculture released its version of the 2018 Farm Bill, the Agriculture and Nutrition Act (HR 2), calling for statutory changes to the Organic Foods Production Act (OFPA) of 1990, and to the make-up of the NOSB.

The National Organic Coalition, which includes 14 farmer and consumer organizations, gave the draft an “F” on its recent scorecard due to the to unprecedented reforms to the organic program that are “unnecessary and weaken the authority of the NOSB.”

In addition to chairing the NOSB, Chapman is the director of ingredient sourcing at Clif Bar. While he strongly supports statutory fixes that increase transparency and accountability to preserve organic integrity, he said, “I don’t think that any of the amendments proposed by the House needed to be solved legislatively.” He points to the fact that employees of large-scale organic producers, such as the berry company Driscoll’s and the organic cooperative CROPP have already occupied positions on NOSB, so Chapman believes the process is already working in a way that is flexible and responsive to the market.

Others don’t believe that the board has kept up with the accelerated growth and expansion of the market. The House Agriculture Committee asserts that there’s a need to clarify board roles within the law. “Today’s farms, including organic farms, come in all shapes, sizes, and business structures,” a House Ag committee aide, who asked to remain unnamed, replied to Civil Eats via email. “This policy will ensure those who have applicable expertise and a vested interest in the organic program are not arbitrarily excluded from the process.”

Certainly, the legal clarification for NOSB roles may seem like the least momentous issue in the 2018 Farm Bill, which also proposes major overhauls to SNAP food assistance programs and farmland conservation funds. But for organic insiders, it represents a significant erosion of the board’s authority on matters of organic law.

Jay Feldman, executive director of Beyond Pesticides, sat on the NOSB as the environmental representative from 2010 to 2015. He’s concerned about the change. “There are so many large companies getting involved with organic that do not have the history with organic, and that makes them less than optimal members of the NOSB,” he said. “They don’t have the insight into organic practices.”

If a Del Monte employee replaces a small-scale family farmer, for example, “you’re undercutting the integrity of the organic seal,” said Feldman.

While Congress has never tinkered with the structure of the NOSB before, the greatest concern stems from the proposed “expedited process” for approving substances for the National List of Allowed and Prohibited Substances. Until now, the OFPA has granted NOSB the exclusive authority to approve agricultural inputs such as fertilizers and pesticides for certified organic crop and livestock production. It also expressly prohibits the Secretary of Agriculture from adding any synthetic materials (generally prohibited) such as pesticides and herbicides, and non-synthetic or natural materials (generally allowed), such as essential oils and copper sulfate, to the National List without the specific recommendation of the NOSB.

But the House’s proposed farm bill would change the status quo.

“That concerned us,” said Megan DeBates, legislative liaison for the Organic Trade Association (OTA). “The Secretary could add something to the National List without approval from the NOSB.” The biggest concern is synthetic pesticides.

Another troubling provision includes an as-yet undefined “task force” to review petitions for any substance that has been approved by the FDA or EPA. The USDA Organic certification involves a much higher set of standards than those agencies allow, especially in evaluating the ecological impact of the products.

“Many of the critics of organics are really steeped in the pesticide side of the input regulation and not familiar with the degree to which organic farmers are monitored by the compliance process,” said Feldman. He cited the use of copper sulfate as a fungicide that includes strict compliance standards and oversight.

The goal of organic agriculture is to incentivize alternative products and practices in the market. What happens to the process, critics like Feldman wonder, when an NOSB member from a multinational corporation questions why the company cannot use a substance that’s been approved by the EPA or FDA? The ultimate danger is that the Secretary or a petitioner backed up by the EPA or FDA could override the NOSB. If passed, these statutory changes could ultimately eliminate the difference between conventional and organic foods.

“My biggest fear, bottom line, is that if we allow the chipping away of this statute we will destroy the integrity of this label and the public will no longer pay the premium in the marketplace,” said Feldman.

During the Obama administration the USDA impinged upon NOSB authority by dictating the board’s priorities and changed the sunset process, the procedure for adding and removing substances to the National List every five years. And in March, Agriculture Secretary Purdue withdrew a set of animal welfare regulations that had been shaped in large part by the NOSB over a well-vetted 10-year process. That battle is now in the federal courts, but has divided the organic industry

According to OTA’s DeBates, the majority of the association’s 9,500 members “oppose making changes to the NOSB.”

“The changes are not coming from the organic industry,” confirmed NOSB chair Chapman. “I would like to dialogue with these folks about those concerns.”

In March, the OTA sent a letter to Senate Agriculture Committee Chair Pat Roberts and ranking member Debbie Stabenow that was also signed by 138 organic power players opposing changes to what it called the “unique public-private partnership” of the NOSB. So far, the letter has gone unanswered.

Along with Roberts’ constituents, many groups are disgruntled with the state of the nation’s certified organic program. But it remains unclear, who, exactly, is pushing Congress for these changes in the farm bill.

“The process hasn’t been very transparent,” said DeBates. “If there are people advocating for changes [behind closed doors], then that’s a big red flag.”

Pesticide and fertilizer manufacturers that have had their petitions for materials denied by the NOSB may also be lobbying Congress. But Congressional staffers aren’t naming names.

The details will likely play out in the long legislative process ahead. “The organic industry is on high alert,” said DeBates.

In her new book, ‘How to Sell a Poison,’ Elena Conis explains how DDT is linked to other ubiquitous toxic chemicals, as well as social inequality, race, and environmental pollution—and why the tobacco industry funded a secret campaign to bring it back.