Will Robot-Led Restaurants Be a Gift or a Curse to Food Workers? | Civil Eats

Will Robot-Led Restaurants Be a Gift or a Curse to Food Workers?

Spyce, a Boston restaurant built around a robotic kitchen that opens its doors today, might reshape the future of restaurant work. 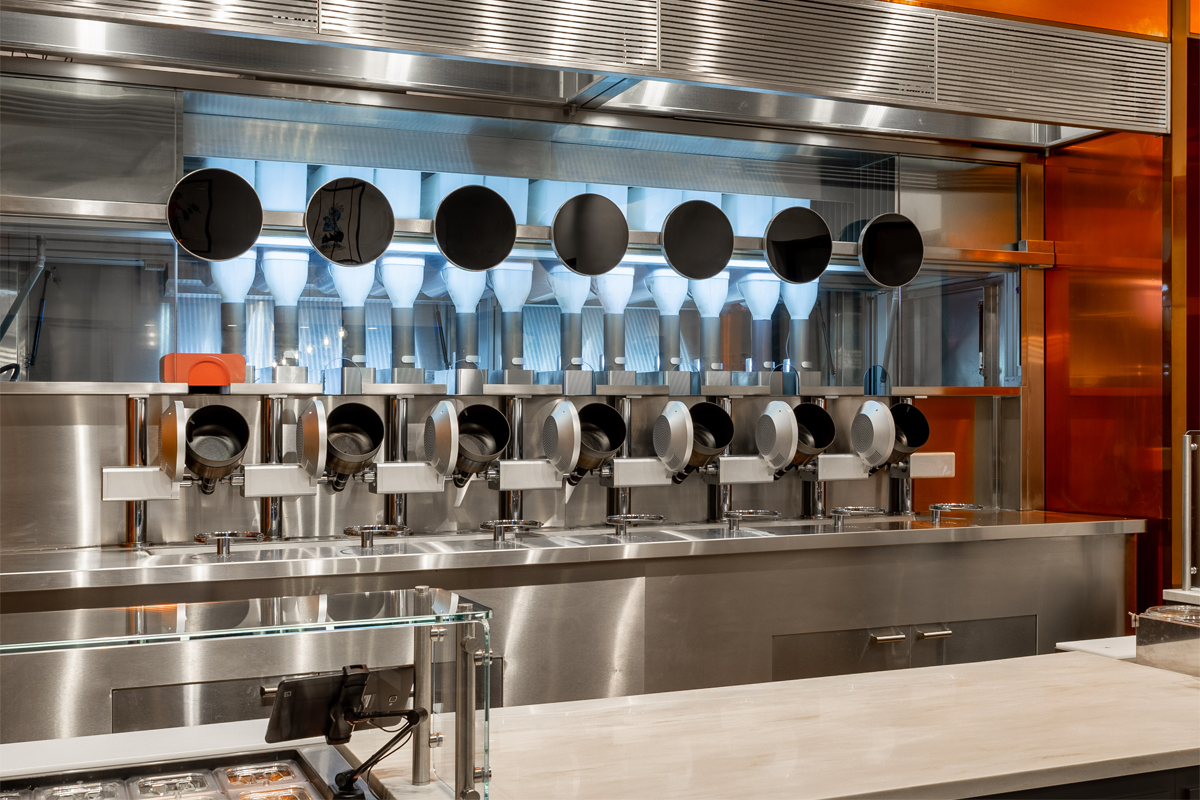 The menu at Spyce, which opens today in downtown Boston, isn’t noticeably different than the menus you’d find at a half-dozen other quick-service lunch places within a three-block radius. It’s filled with grain bowls with brown rice and freekeh, mix-ins including pomegranate, chicken, and kale, and toppings such as avocado, egg, and yogurt.

But what sets Spyce apart from the Dig Inn two doors down or the two Sweetgreens within a stone’s throw is who—or, rather, what—cooks the food. The star culinarian at Spyce is a nine-foot long, 14-foot wide robotic kitchen—so, not really an employee at all.

The machine wirelessly collects multiple orders from a bank of self-service menu kiosks, displays the names of the guests whose orders are being prepared, pipes the various ingredients from refrigerated hoppers into a spinning wok to be cooked and tossed, and dumps the hot meal into a compostable bowl waiting on the counter below. Only then does a human handle any part of your meal, adding fresh ingredients and handing over the order, a process designed to take as few as three minutes.

But, despite the small number of humans involved, Spyce’s co-owners appear to be taking the human touch quite seriously.

“At the end of the day, a restaurant is all about hospitality and, obviously, how good the food is,” says Spyce’s COO Kale Rogers, who built an early prototype of the robotic kitchen with his three current business partners in the basement of their fraternity house at MIT. “We see the automation as a tool to allow us to serve incredible quality to more people. A necessary component is the human touch—the presentation, the personalization, the handing it to you with a smile.” 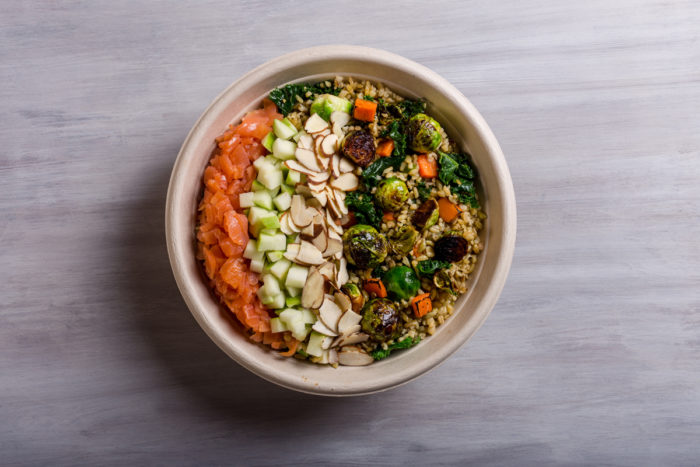 Spyce’s robotic system, plus a number of other recent advances in restaurant automation, may raise questions about the culinary future we want. They’re questions easily recognized in nearly every sector, from driverless cars in the automotive industry to self-checkout in grocery stores. Will replacing cooks with robots or cashiers with computers be good for the nation’s often-undervalued food workers? Or will it just make them obsolete?

Restaurant industry leaders have blamed fair pay movements like Fight for $15 for the rise of restaurant automation, with the assumption that more robots equals fewer human workers. But some workforce advocates note that automation may actually end up being beneficial to restaurant workers.

A Short History of Robotic Restaurants

In developing Spyce, Rogers and his co-founders had a lot to learn from less-successful experiments in automation over the last several years.

For one, they brought on renowned chef Daniel Boulud, who drew from his Michelin-rated restaurants for design and flow. Along with executive chef Sam Benson, Boulud helped develop Spyce’s menu. Boulud and Benson also convinced the co-founders, who may have been leaning more robot-centric, to place two French-inspired garde mangers at the front counter to garnish the bowls. Two more employees roam the front-of-house, welcoming guests and helping troubleshoot any snags with the kiosk ordering system. A handful of additional human workers prepare ingredients at an off-site commissary kitchen. 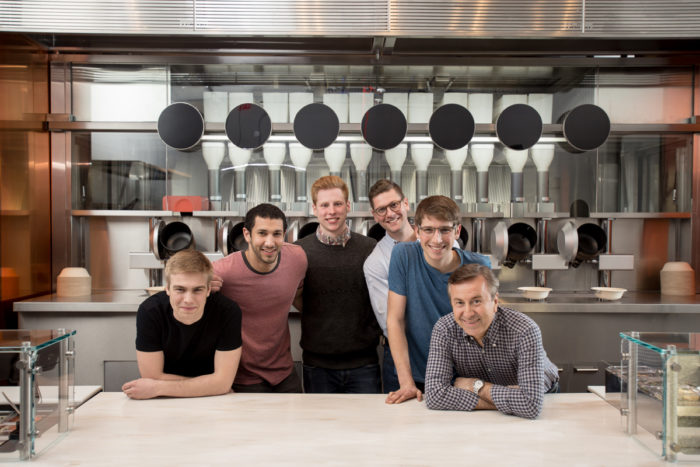 Kale Rogers, co-founder and chief operating officer, wouldn’t say what Spyce is paying its workers—though Boston’s minimum wage is $11 an hour, so assume employees make at least that much—but he acknowledged that customer service is key to creating an environment to which the lunch crowd wants to return week after week.

“It’s staff whose job is to enhance your experience in the store,” he says.

Technology and automation have been seeping into the restaurant industry for years now, dating back even to the automats of the early 20th century. But not all companies wear their automation on their sleeve like Spyce does.

Visit San Francisco-based eatsa—where customers order on kiosks and pick up their machine-made bento bowl or chile con quinoa from a space-age cubby—and you may avoid interacting with a single employee. And at Café X, a coffee bar also in San Francisco, your barista is a robot that pulls orders from a touch-screen monitor and pours espresso drinks, drip coffee, and cups of nitro cold brew. There’s also Flippy, the food-safe robot arm that has made national headlines for its ability to grill, monitor, and place burger patties on buns at CaliBurger’s Pasadena location.

Many other, more mainstream eateries are experimenting with automation and technology, such as digital menus and payment pads at the table, as a way to lower rising labor costs, says Patrick Maguire, a restaurant consultant in Boston and author of the blog Server Not Servant. Maguire says the idea of automation may make sense from an economic and efficiency standpoint, but it can end up harming the guest experience because machines and humans are not equal in their intangible service skills.

“It’s true that robots can’t call out sick or bitch about their schedules, but they also can’t ‘think on their feet’ or provide the same hospitality that humans can,” Maguire says. “And often, one of the best aspects of dining out is interacting with a great server, bartender, or staff member.”

And yet, some have predicted we’re moving closer to the widespread replacement of human restaurant workers with robots, computers, and other forms of technology. These predictions sometimes come in the form of threats from restaurant lobbyists to advocates of higher wages for food workers, such as the Fight For $15.

Robots and the Restaurant Workforce of the Future

Saru Jayaraman, cofounder of the worker advocacy group Restaurant Opportunities Centers United and one of the engines behind the Fight For $15, says she has yet to see robots replace humans in the restaurant industry. In fact, Jayaraman noted that data suggest automation could lead to increased restaurant employment in the future.

One need only look, she says, to California: ground zero for both the booming restaurant industry and for automation in restaurants. For starters, even as automation becomes more commonplace in California, restaurant employment there has exploded, increasing 45 percent from 2001 to 2016.

Many headline-grabbing robots and systems, like Flippy, were born in the Golden State, and fast-food chains have used California as proving grounds for technologies like self-service kiosks and tablets, mobile ordering and payment, customizable menus, and table service. A September 2017 ROC memo points out that on the whole, automation of some tasks has led to changes in the kinds of positions restaurants need, but not in the number of staff.

The memo notes that Starbucks has seen mobile ordering and payments boost its sales, allowing it to increase the number of baristas without needing to hire more cashiers; Panera is adding staff to handle greater order volume through its self-serve kiosks. And while servers at restaurant chains like Chili’s, which has added tablet-based ordering at its tables, can handle tables quicker and more accurately during the heavy dinner rush, their presence is still key to the dining experience.

“We see two futures in our industry: One future [leads to] higher wages, better benefits, and professionalizing an industry that has been undervalued for too long,” says Jayaraman. “The other future is what we call the ‘low road,’ and involves digitization and extremely low wages. Which future is tech supporting with automation?”

The real question may be whether consumers will buy wholesale into a more automated, less human-run restaurant industry. Eatsa, the quick-service restaurant where meals were placed into cubbies for customer pickup, closed all but two of its retail locations after sales flagged and shifted its business model to licensing its technology. Jayaraman points to chains that have scaled back automated systems following customer complaints that they were too impersonal. Another full-service chain she heard of rolled out automation on its prep line, only to find that it needed to hire more human employees to monitor and repair the automation.

“Our industry doesn’t lend itself well to workers being replaced by robots,” she says.

Time will tell whether Spyce will be able to find a happy medium in an industry built on hospitality and the human touch. Their model is yet unproven in one of the city’s busiest business districts, but Spyce COO Rogers says he’s confident in what they’ve built, and he and his team will “understand right away if the customer really values what we bring.”