A Facebook Group that Helps the Queer Community Fight Hunger

Queer people are one-and-a-half times more likely than others to struggle to consistently access food. Queer Food Share New York City offers a way for the community to feed each other. 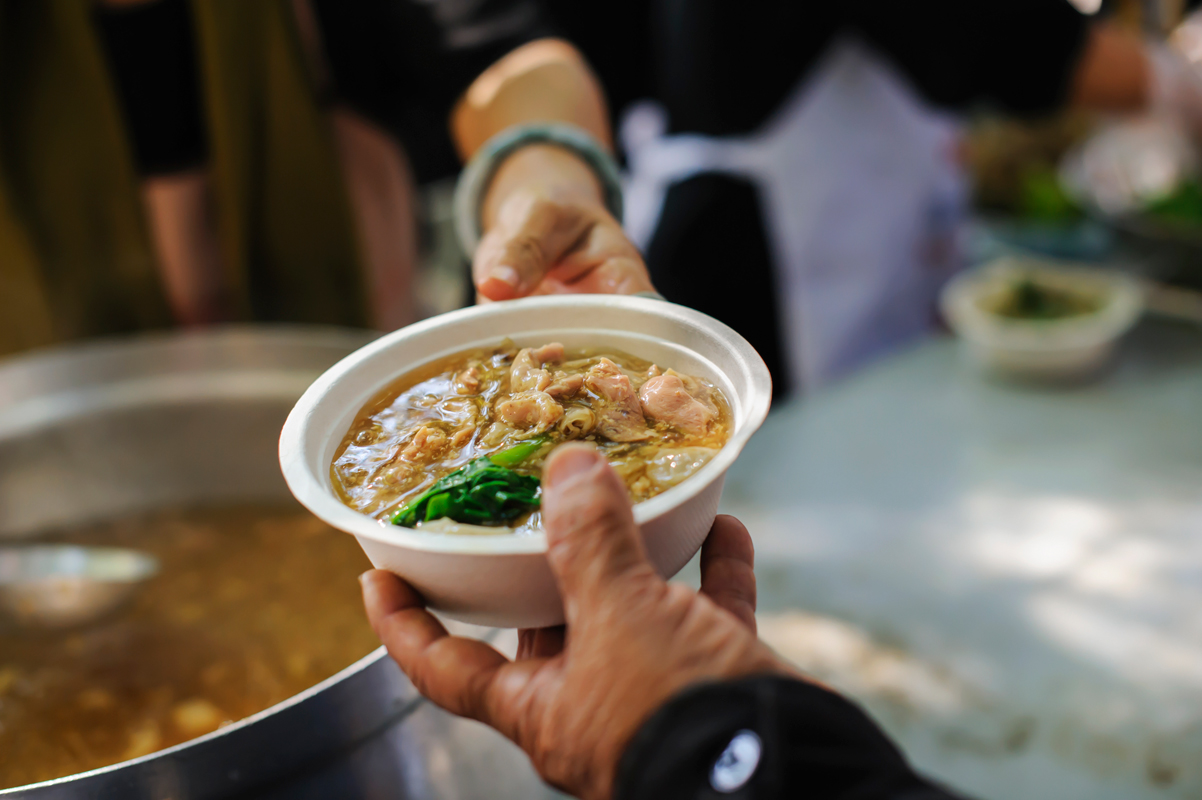 Christi Lanham expected that moving to New York City from Atlanta in June would be a struggle. But it was even harder than expected. Lanham, who uses they/them pronouns, relocated to receive treatment for heroin addiction. They didn’t know anyone in the city, lived on the street in Brooklyn, and had a hard time getting enough food to eat. Occasionally, they would find salvageable food in a dumpster, or they would sit on the sidewalk and hold up a cardboard sign. But often, they went hungry.

At one point—Lanham can’t recall exactly when or how—they discovered a Facebook group called Queer Food Share. There, members could ask for food, or respond when other members offered it. As soon as Lanham became a member of the group, they knew they’d never have to worry about being hungry again.

“I don’t think anyone can understand what that part of my life was like,” Lanham told Civil Eats, “and how amazing it is that so many strangers care and supported me, no questions asked.”

Lanham is one of nearly 2,000 members of Queer Food Share New York City. It’s the largest of several Facebook groups that have popped up in various cities, including Boston and Philadelphia, to tackle the problem of food insecurity within the queer and trans community.

While Facebook groups where strangers give and request food may not sound unusual, consider the fact that queer people, especially those who are femme and of color, are more than one and a half times as likely than others to struggle to consistently access food, according to a 2016 study by the Williams Institute at UCLA School of Law. That’s one in four LGBTQ adults, compared to one in six adults in the population at large. Multiple reports, including from the Center for American Progress and Legal Services NYC, have found that this is mostly due to the discrimination queer people face from employers and their families, which also can result in higher rates of homelessness, joblessness, and poverty. In a sign of the risks these communities face, the Trump administration last week announced that it would begin rolling back an Obama-era rule preventing medical discrimination against transgender people.

Chaya Milchtein, who lives in East New York, started the Facebook group in April 2017 after stumbling on a similar Seattle-based food share group.

“You ask for food, you give food, or you give cat food or dog food. It’s very straightforward,” Milchtein said. “People are hungry. [If] you have extra food, do something with it. Don’t just throw it out.”

Offers on Queer Food Share can take many forms. On any given day, someone might have made too much mac and cheese or soup or cake. That person posts, reads the comments left by people who express interest, fills a Tupperware, and then coordinates a delivery or pick-up location.

Some members post photos of leftovers from their catered office lunches, to be picked up in Midtown, or provide codes for online meal kit orders. Or they might be cleaning out their pantries or getting ready to move. In some cases, baristas post about pastries and sandwiches left over at the cafés where they work. Occasionally, someone who has bought groceries for the week but doesn’t have the time to cook will offer up the ingredients, and sometimes even the use of a kitchen, if needed.

Members can also post asking for food, without the requirement of a backstory. Given the precariousness of living paycheck to paycheck in New York City, a person with food to offer one week might find themselves asking for it the next. That’s been the case for Milchtein, who works at a mechanic shop and does freelance social media management. Sometimes, a person just needs extra support.

One concern that hasn’t arisen—but which has shaped other food-rescue and food-donation efforts—is about risk and liability from expired food. Group moderator Lori Keslowitz said the issue has not yet come up. “I would hope that people would not be going to great lengths to get someone sick and that people use this platform as a means to help others,” Keslowitz said, “but you can never truly trust random people on the internet.”

Along with two other moderators, Milchtein and Keslowitz try to limit the requests to food, not money, emphasizing that the group is one of the few spaces people can comfortably ask for food they need, no strings attached—and where people can easily help each other.

But some contributors, like journalist Kari Paul, have offered to send money or pay for a meal delivery. So far, Paul has sent enough money to cover the cost of a meal, $10 to $15, to three different people via PayPal and Venmo.

“I think if you’re asking for food on a Facebook group, whether or not you’re using the money for food, you clearly could use a hand in some way,” Paul said.

For her, buying someone a meal is a small gesture, a way of paying forward from her own social safety net, and it could have an effect that ripples beyond satiating hunger. “Maybe it’ll make it easier for them to go apply to a job or lift them out of whatever situation they’re in,” she said.

In Christi Lanham’s case, getting help with food made it possible to make other, much-needed changes. They are no longer homeless, and now live in Spokane. And they believe Queer Food Share was an important stepping stone.

“What they’re giving you, they give because they feel it’s the right thing to do,” Lanham said, “and they’re not trying to make you prove yourself.”

While Lanham was able to get on Medicaid and go to a methadone clinic, they had a hard time accessing other services in New York. Housing never came together, and they couldn’t qualify for food stamps because they didn’t have the right identification. For Lanham and others, Queer Food Share serves as an alternative to navigating the bureaucracies of more official forms of services, such as food stamps or pantries.

“It’s interesting how community grassroots responses wind up getting created to fill in the gaps where government fails,” said Kate Barnhart, the director of New Alternatives, a Manhattan-based social services organization for LGBTQ+ youth.

Barnhart refers her clients to food pantries and soup kitchens around the city, but operating hours, identification requirements, and gender segregated environments can restrict their access. Many pantries also offer produce and other raw ingredients, and there’s no guarantee these youth have kitchens, food storage spaces, or the necessary cooking skills or supplies—such as can-openers and strainers—to make use of the ingredients. For these reasons, Barnhart has recommended that some of her clients check out Queer Food Share.

Poverty and food insecurity can create a domino effect in a person’s life. Not eating well affects a person’s moods and ability to concentrate, which affects performance in school and at work, which can limit income, which, of course, can lead to that person not being able to afford housing. Many medications must also be taken with food.

“Food access becomes one need among many social service needs, and it’s the one that’s the most imminent and dire,” said Gaines Blasdel, a caseworker at Callen-Lorde Community Health Center, which provides care to LGBTQ and HIV-positive people. “When someone has a [limited] amount of money for transportation and they’re trying to choose between seeing the legal services referral for the eviction situation they’re in and going to a food pantry, they’re going to choose the food pantry to solve the immediate need.”

Social service support workers also like the fact that Queer Food Share is a non-judgmental option for his clients, free from discrimination and harassment. Milchtein works to keep the group that way.

“When we put our community together on a specific platform, it makes people feel safer and more comfortable to offer these things to each other,” Milchtein said recently in her kitchen, as she prepared chili for a dinner party she was throwing for friends—and for several Queer Food Share members—that night. “This is a way we can help each other, we can support each other, regardless of what the world thinks, regardless of what everybody throws at us, regardless of our labels and our identities.”

Samantha Maldonado is a multimedia journalist based in New York City who writes about cities, health, and culture. Read more >