Animal welfare groups are tackling the welfare of chickens destined for McNuggets and McChickens. But past victories don’t guarantee a success. 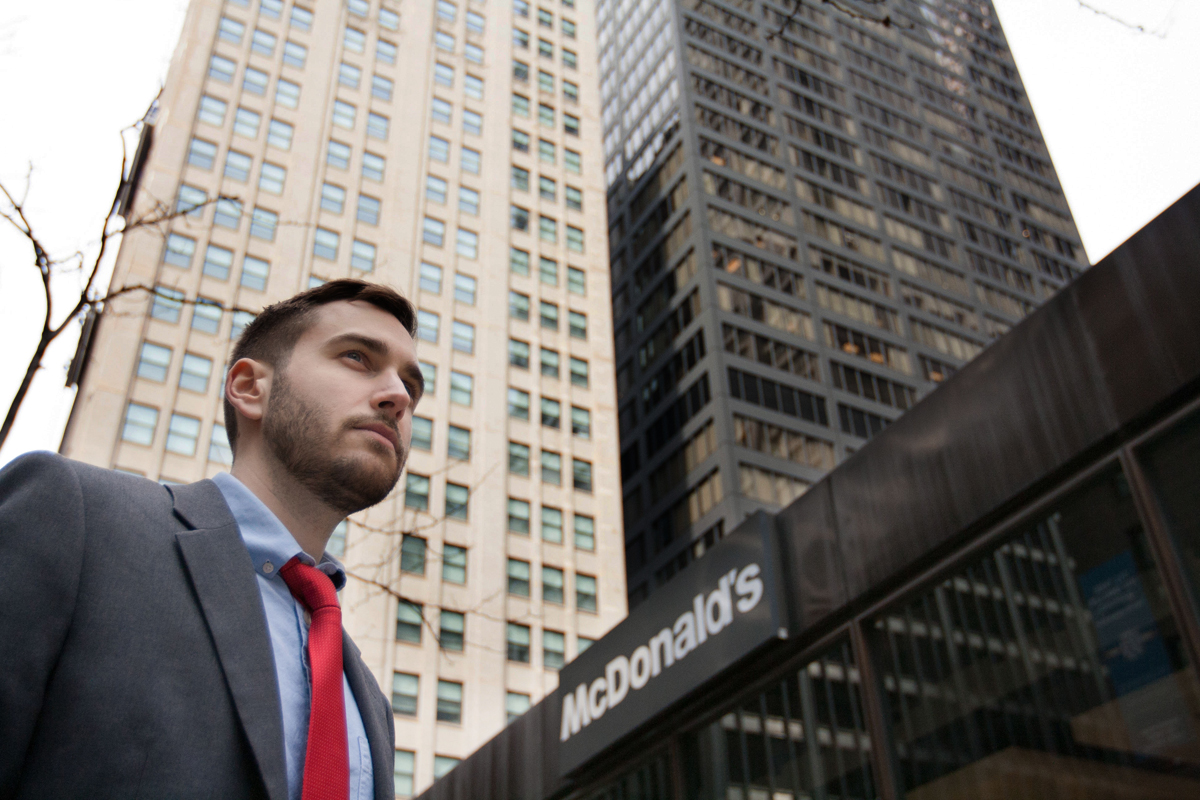 Thanks in part to McDonald’s, the farm animal welfare movement has notched some big wins in recent years, helping to liberate pigs from gestation crates and get laying hens out of cages. Now, in a turnabout, McDonald’s has become the target of an ambitious new campaign to change the way billions of chickens are raised and slaughtered for food.

The campaign, dubbed “I’m Not Lovin’ It,” has united the animal welfare movement as never before. Six groups—Mercy for Animals, the Humane League, Compassion in World Farming U.S., Compassion over Killing, Animal Equality, and World Animal Protection—have joined forces. Together, they are organizing street protests, letter-writing campaigns, and quieter, behind-the-scenes efforts, all of which are designed to persuade McDonald’s to require its two big chicken suppliers, Tyson Foods and Keystone Foods, to improve their animal welfare practices. 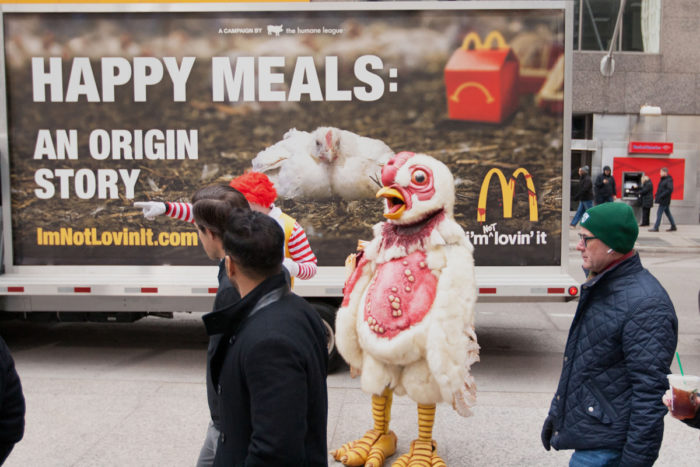 The stakes are high: Of the 9 billion farm animals raised and slaughtered for food each year in the U.S., the vast majority—about 8 billion—are broiler chickens (as opposed to laying hens). McDonald’s, which already sells more chicken than burgers, plans to expand its chicken offerings, taking direct aim at such competitors as Chick-fil-A.

“McDonald’s is the giant machine,” says Leah Garces, the executive director of Compassion in World Farming U.S. “It’s them and Walmart—they’re the key deciders.”

McDonald’s clout was made evident in 2015, when, after years of campaigning by animal advocates, the fast food chain, which is the U.S.’s largest buyer of eggs, said it would gradually insist that all of its eggs come from hens not confined to cages. It also said it would buy only broiler chickens raised without antibiotics.

Those two changes, Fortune magazine said, are “potentially transformative not only for McDonald’s—where chickens and eggs now account for 50 percent of the items on the menu—but for the entire American food industry.” Wayne Pacelle, former president of the Humane Society of the U.S., said at the time that “McDonald’s admirable move makes clear that egg production’s future is cage-free.”

This battle over broiler chickens will be tougher, for several reasons.

First, there’s no catchy phrase or concept, like “cage free,” to rally consumer sentiment on behalf of the chickens raised for meat. Animal welfare groups want producers to adopt slower-growing breeds of chickens and to provide the birds with more space and more light, but consumers know very little—maybe because they don’t want to know—about how chickens are raised. More than nine in 10 Americans mistakenly believe that broiler chickens are raised in cages, according to a food-industry study. “Consumers are woefully unknowledgeable of modern broiler production practices,” an industry study reported.

Second, McDonald’s and its big suppliers, notably Tyson, say that the higher welfare standards sought by the animal advocates will raise the costs and environmental impact of chicken production. Slower-growing chickens require more feed, which is mostly corn and soybeans, grown on industrial-size farms that use large amounts of fertilizer, water, and land. 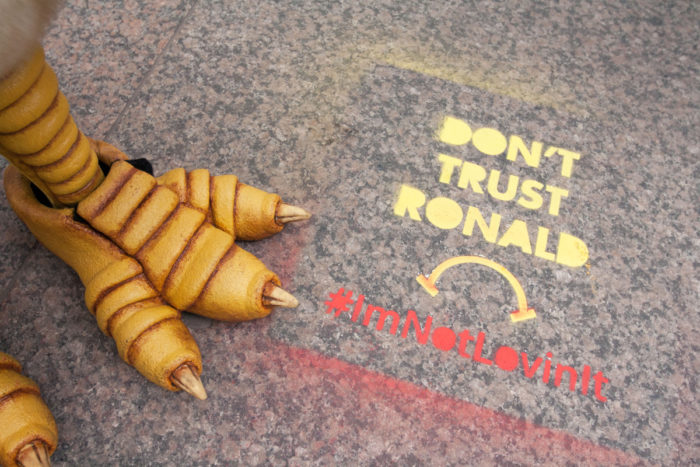 Photo courtesy of The Humane League

Third, the animal welfare movement currently isn’t operating at full strength because of the sexual harassment scandal at the Humane Society of the U.S. that led to the resignation of Wayne Pacelle, its former CEO, and the departure of Paul Shapiro, its former vice president for farm animal protection. The Humane Society, which has led past animal welfare campaigns, is operating with an interim CEO, Kitty Block, and a board of directors that has lost the confidence of some donors and staff members because it failed to act on complaints against Pacelle.

Eight animal advocacy groups—the six active in the current campaign, along with the Humane Society and the American Society for the Prevention of Cruelty to Animals (ASPCA)—laid the groundwork for “I’m Not Lovin’ It” early in 2017 when they agreed on a set of demands that they say are needed to improve the well-being of broiler chickens. Among other things, they asked food retailers, restaurants, and supermarkets to source only chickens that come from slower-growing breeds approved by the Global Animal Partnership or the Royal Society for the Prevention of Cruelty to Animals (RSPCA), which are independent nonprofits that promote animal welfare.

In a report called The Truth About McDonald’s, the groups say that chickens that are bred to grow faster and develop enlarged breasts suffer from “reduced walking ability and activity, high mortality, and skin lesions.” Today’s chickens grow to maturity in just 48 days, on average, less than half the time it took to grow a chicken a century ago, and their bones are often too weak to support their weight.

“The breed is the issue,” says David Coman-Hidy, president of the Humane League, which is organizing nationwide street protests this spring and summer against McDonald’s. “We need to turn the clock back on the breed.” Leah Garces of Compassion in World Farming agrees, saying: “Consumers don’t want birds that are bred to suffer.”

About 85 companies, including Subway, Burger King, Panera Bread, and Starbucks, along with food-service giants Sodexo and Aramark, have agreed to the higher welfare standards, the groups say. The standards also give chickens more room to move, which are said to be important to their well-being.

“The fact that we’ve gotten companies like Subway and Burger King to sign on makes me think it’s possible to get McDonald’s,” Coman-Hidy says. 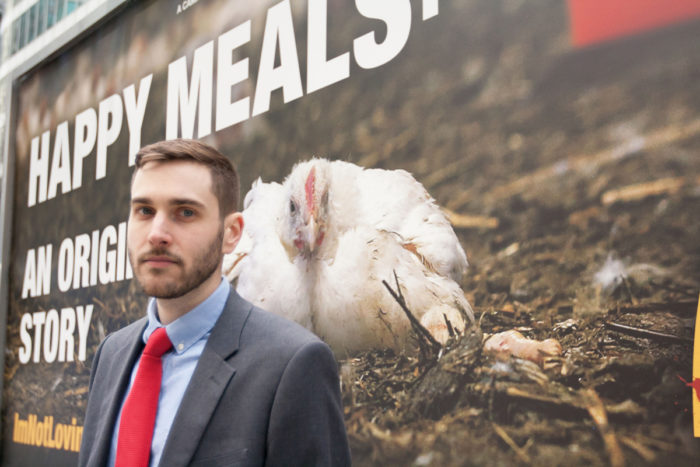 In a victory for the animal advocates, Perdue Farms broke ranks with other poultry producers and said last summer that it would meet the demands of any corporate customers that adopt the higher welfare standards.

But when McDonald’s announced its own chicken welfare policies last fall, they fell “far short” of the pledges made by competitors, according to Josh Balk, a Humane Society executive who has worked closely with the company for years. “It’s disappointing,” Balk says.

Blockhuis is the only independent expert on the council*. Grandin is a paid consultant to McDonald’s and WWF, while a nonprofit, is also paid by McDonald’s, between $500,000 and $1,000,000 in FY2016, according to WWF.

The National Chicken Council, a poultry industry group, says the reforms sought by the animal welfare groups are unnecessary and counterproductive. “All current measurable data—livability, disease, condemnation, digestive, and leg health—reflect that the national broiler flock is as healthy as it has ever been,” the council says.

The poultry growers estimate that if even one-third of broiler chicken producers switched to slower growing breeds, “nearly 1.5 billion more birds would be needed annually to produce the same amount of meat currently produced—requiring a tremendous increase in water, land, and fuel consumption.”

The industry also says that the additional cost of even one-third of the industry adopting slower growing birds would be $9 billion, which could have a negative impact on retailers, restaurants, and consumers. “This will put a considerable percentage of the population at risk and increase food instability for those who can least afford to have changes in food price,” the Chicken Council says.

Animal welfare advocates agree that higher standards will raise the environmental impact and cost of chicken. But they say there’s an easy solution: Eat less chicken.

“That’s the best way we can protect the environment and animals,” says Erica Meier, the executive director of Compassion Over Killing. The group has put a spotlight on the plight of broiler chickens with undercover investigations, including a shocking video expose of a Tyson breeding facility that led to the arrest and conviction of 10 workers on animal cruelty charges. Tyson fired the workers and said it was outraged by their behavior.

It’s not entirely clear why the Humane Society isn’t part of the “I’m Not Lovin’ It” campaign. It has had a long, friendly relationship with McDonald’s, and may be more effective working behind the scenes, insiders say. Others say the Humane Society was asked not to participate because it has yet to make amends for the way it treated women. Ten women, who are former and current Humane Society workers, have hired San Francisco civil rights lawyer Kelly Dermody to urge the organization to account for the way women have been treated, and to remedy any wrongdoing.

* Correction: The article was corrected to reflect the fact that Harry Blockhuis is an independent expert, and is not paid by McDonald’s. We apologize for the error.