Already in the midst of a farm economy downturn, China’s proposed tariffs place America’s farmers and rural farming communities in a precarious position. 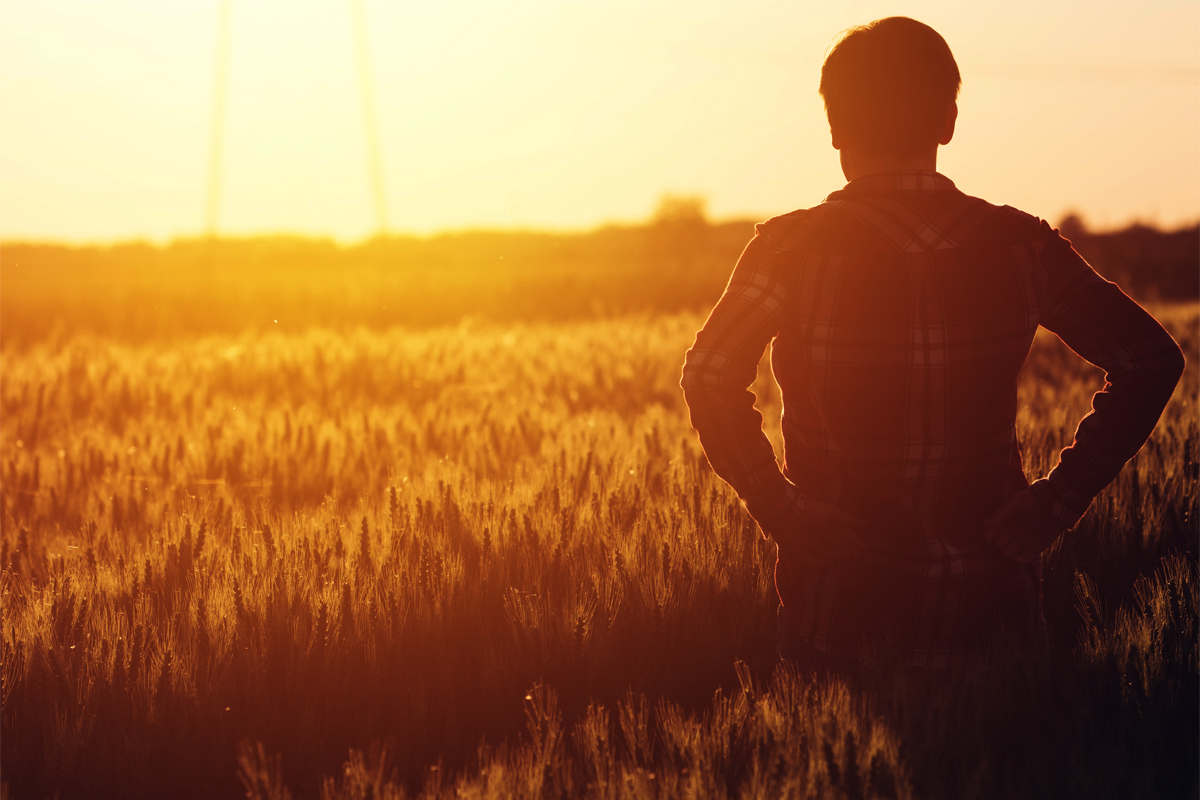 When the U.S. House of Representatives Agriculture Committee released its draft of the 2018 Farm Bill yesterday, it was notable that trade earned a top spot in the discussion. And for good reason: The ongoing trade dispute between the United States and China has produced a growing list of tariff threats from both sides, with China recently targeting several key U.S. agricultural crops.

As of April 2, China has put in place tariffs on a range of U.S. agricultural products, including 15 percent on goods including fruit, nuts, and wine, and a 25 percent tax hike on pork. When Trump shot back with a threat to target an additional $50 billion in Chinese goods, China reciprocated with a threat of additional tariffs of 25 percent primarily targeting soybeans, corn and corn products, wheat, sorghum, cotton, beef and beef products, cranberries, orange juice, and tobacco and tobacco products. So far, neither country has announced when it intends to impose these latest tariffs.

Because China is the second-largest market for U.S. agricultural exports, the stakes are particularly high for the farm economy. Exports to China represent almost $20 billion annually for American farmers, and while the tariffs are likely to affect a broad range of commodities, some will be hit harder than others.

“Soybeans and pork are the biggest [that have been] mentioned—then there will be immediate disruption of those markets,” says Alan Deardorff, a professor of economics and public policy at the University of Michigan.

China purchases more than half of total U.S. soybean exports, and more than 30 percent of the soybeans grown here. American Soybean Association president and Iowa farmer John Heisdorffer believes the proposed tariffs will have a “devastating effect” on soybean farmers and will likely encourage China to turn to countries like Brazil.

“Our South American neighbors would be only too happy to supply China with more of their crop,” Heisdorffer explained by email. “They could add acres because they have more land to develop into cropland.”

The American Farm Bureau Federation and ag groups representing other commodities have urged President Trump to engage in a more reasoned and responsible approach to negotiations. With farmers already facing a 12-year low in farm income, a trade war with China could have further detrimental effects on agricultural livelihoods in many states.

According to a detailed analysis by the Brookings Institution, as many as 170,000 workers in the corn, soybeans, and pork industries could be affected by a trade war, and up to a quarter-million workers in specialty industries including wineries and fruit and nut production.

The map of impacts demonstrates that the proposed tariffs could have real implications for local communities and workers—agricultural or otherwise—across the country.

“While any ‘trade war’ may be entered as a matter of abstract geopolitics, its particular battles will ultimately involve local and regional economies and jobs—with potentially unexpected ramifications,” write the authors of the study. 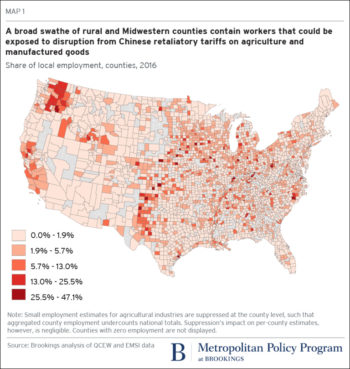 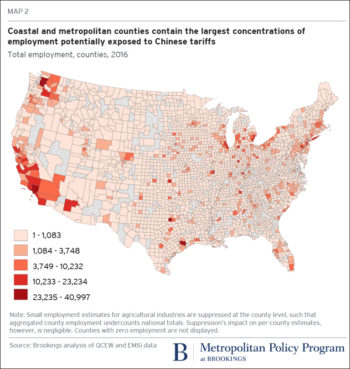 Maps courtesy of the Brookings Institution (click for larger version)

In a statement to the press, Trump acknowledged that farmers would likely take a hit from the trade disputes with China. But following further action on the North American Free Trade Agreement and future negotiations with China, Trump claims “farmers will be better off than they ever were.”

Trump has directed the U.S. Department of Agriculture (USDA) to create a plan to help farmers cope with the financial damage from tariffs. But while the USDA has promised to step in should the latest tariffs be implemented, it has been vague about how that contingency plan might look, or if the department could even produce the funding for it.

“It is hard to imagine how U.S. farmers would be better off as a result of a trade war,” says Marilyn Borchardt, interim director at the Institute for Food and Development Policy. “The threat has already depressed commodity prices. And it’s not at all clear that Trump can deliver on his promise of additional government support to farmers.”

“Farmers want negotiations, not mitigation,” says Heisdorffer, a position articulated in a letter by the American Soybean Association requesting to meet with Trump. The letter appeals to the administration to collectively work with soybean farmers and others export-driven agricultural industries in developing solutions to help reduce the trade deficit—solutions that Heisdorffer noted in testimony before Congress yesterday including expanding rather than restricting access to markets and provide alternatives to foreign trade barriers.

Approximately one-third of the products targeted on China’s latest tariff list are food and agricultural products. Here are more details on the hardest-hit crops:

Soy: U.S. soybean exports to China amounted to $12.4 billion in 2017, accounting for more than half of the $19.6 billion total for all U.S. agricultural exports. Soybeans are the number one agricultural export for many U.S. states, and a 25 percent tariff will likely hurt many farms.

Pork: In 2017, China was the third-largest value market for U.S. pork exports, importing more than $1 billion of products. China has proposed 25 percent tariffs on U.S. pork, which the U.S. National Pork Producers Council warn could have a significant negative impact on rural America.

Cotton: China is currently the second-largest buyer of American cotton. China bought approximately 2.5 million bales, or $976 million worth of U.S. cotton in 2017. Experts say that these exports will be hurt by the tariffs.

Fruits and nuts: A great majority of the fruit and nut crops subject to the tariffs are central to California and Washington agriculture. Pistachios and almonds are California’s biggest agricultural exports to China, valued at $531 million and $518 million respectively for 2016 exports. Meanwhile, 13 percent of Washington’s cherry crop went to China in 2017, while Hong Kong and China combine to make up the state’s fifth largest export market for apples. A 15 percent import tax recently went into effect on many fruit and nut crops; time will tell just how it will impact growers.

China and the U.S. are yet to negotiate on trade solutions. And in a major reversal of policy, it appears the Trump administration is considering rejoining the Trans Pacific Partnership, a multi-country trade deal that excludes China. American farmers and ranchers must now wait to see if the back-and-forth rhetoric will escalate into a full-on trade war. But just like with any war, costly casualties may be unavoidable.