Female grain growers, millers, and artisan bread bakers are collaborating to lift women’s role in bread into the spotlight. 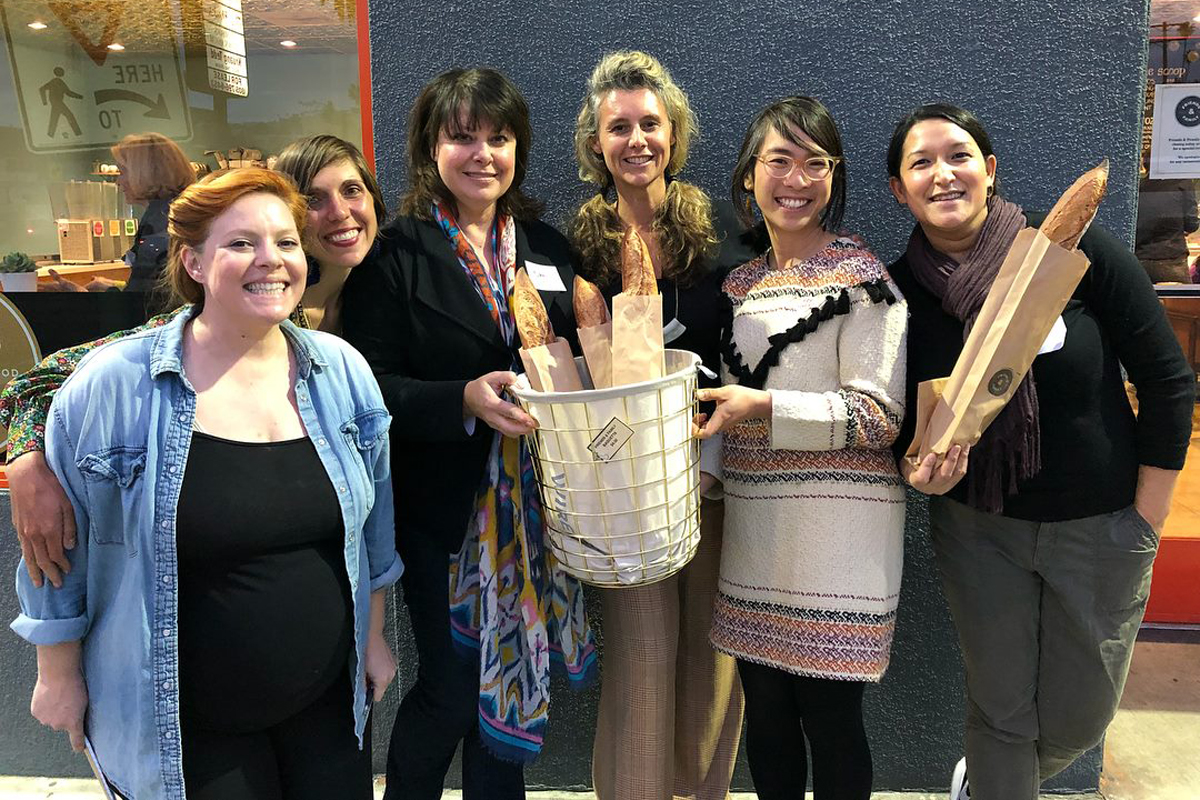 In March, when the New York Times ran an article celebrating Los Angeles’ arrival to the artisan bread scene, it focused largely on male bakers.

While the reporting included baker Roxana Jullapat and flour miller Nan Kohler, it reflected the media’s habit of treating men in the industry like rock stars and overlooking women doing similar work. This lopsided approach to story telling has become standard as artisan baking has grown hip and regional grain systems have developed over the last decade. But there are plenty of women at the forefront of the movement re-imagining grains, flour, and bread.

Just one week after the Times article ran, a group of women gathered for a panel discussion in L.A. that had been planned for months, but also functioned as a kind of response to the story. “Bread Winners: A Conversation with Women in Bread” was organized by the California Grain Campaign to salute the work of women during Women’s History Month.

“Zoe Nathan has been baking bread for years [at Huckleberry Bakery and Café and Rustic Canyon], but when people talk about [artisan] bread, they act like it started three years ago at Clark Street Bread,” said Jullapat, co-owner of Friends And Family, the bakery and restaurant that hosted the talk.

And the event had bigger fish to fry than gender parity. The talk was just one of several in the California Grain Campaign, a grassroots push to get more bakers using 20 percent whole-grain, California-grown and -milled flours by 2020. At farmers’ markets and bakeries, the campaign creates opportunities for fresh flour to speak for itself, and for bakers and other grain advocates to explain what’s going on with this “new” ingredient. 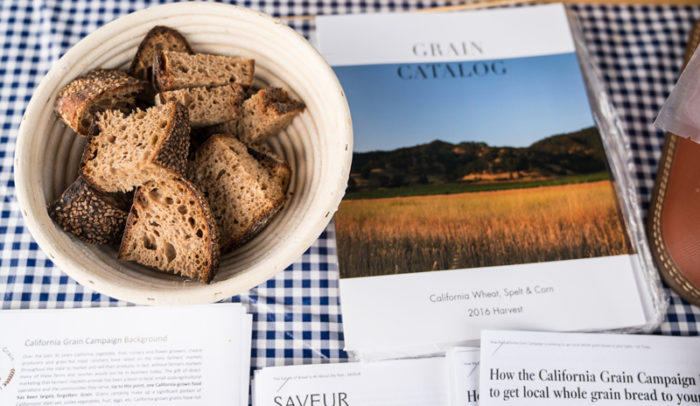 Heritage whole-grain flours have very different flavor profiles than off-the-shelf flours, and while they have been creating a buzz in the baking community for years, the campaign’s advocates also hope to help consumers understand why they’re worth the added cost at $2 to $4 a pound.

The first Bread Winners event was intended to be an extension of the conversation Jullapat often found herself having with Kohler when picking up heritage grain flour at Kohler’s mill, Grist & Toll; the two women wanted to tap into that creative exchange and foster a broader dialogue about baking and fresh flour.

Soon they invited other speakers to join them, including grain farmer and California Grain Campaign organizer Mai Nguyen and baker Kate Pepper. The topic hit a chord, and 100 free tickets were snapped up in days. On the day of the event, many people were turned away at the door.

Nguyen, who grows heritage wheat in California (and was featured in a video series from King Arthur Flour and the National Young Farmers Coalition on the next generation of grain farmers), framed the talk with a poetic evocation of seeds and grains.

“We know from the historical record that women saved seeds,” said Nguyen. In the case of women entering and escaping slavery, persecution, or oppression, she added, “women carried seeds for futures they might not even [be part of].”

Many in the crowd were excited about the alternative grains, flours, and baked goods at the center of the panelists’ work. “The word that kept coming up was ‘inspiration.’ Our community is really hungry for that engagement about grains,” Kohler said after the event. 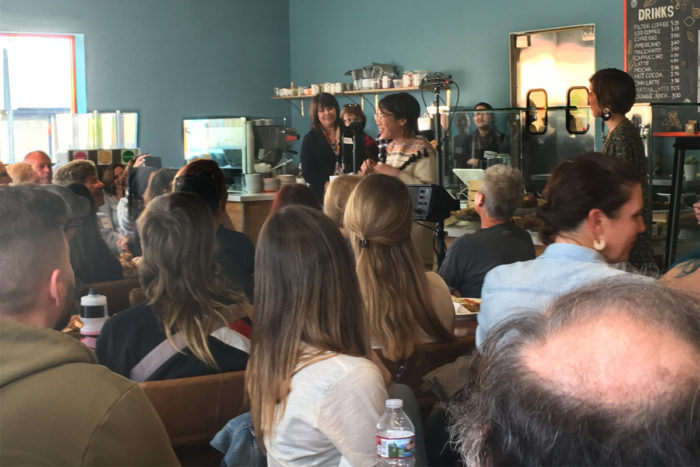 Participants asked questions like: Where do we buy it? How do we use it? What makes it different—and so expensive?

The audience wanted to understand what it takes to generate flavorful fresh flour, and how heritage wheat travels from the farm to their croissants.

Nguyen told the story of two California women who were not in the room, Sally Fox and Monica Spiller. Key protagonists in the emerging regional grain revival, Fox is a cotton breeder, and Spiller is a chemist with a strong interest in grains. The women have worked in tandem on multiple seed projects at Fox’s farm, with Spiller growing out teaspoons-full of heritage varieties from the U.S. Department of Agriculture’s (USDA) Small Grains Collection in Idaho.

This initiative helped get white Sonora wheat included in Slow Food’s Ark of Taste. Native Seeds/SEARCH also included Sonora wheat in their seed conservation work in Arizona, and Spiller has shepherded it and other grains from sample size to volumes farmers could plant. Sonora wheat is now a relatively familiar food because of the way these women worked behind the scenes. Because Spiller’s name is still unknown, Nguyen wants to change that.

At the Bread Winners talk, Nguyen invited the crowd to write thank you notes to Spiller for her work and vision—and the audience did just that.

“I’m very grateful that they noticed my work,” Spiller said in a phone interview after the event. She’s the founder of the Whole Grain Connection and while the organization is dedicated to understanding and supporting landrace grains, whole-grain baking and nutrition are where her heart is.

Spiller’s curiosity was piqued when she learned about the superior nutrition of whole grains in the 1970s. “Why on earth do we not eat our grain foods whole?” she wondered at the time. Spiller trained as a chemist, and then worked first in teaching and then in pharmaceuticals. This background applied well to her investigations of whole-grain sourdough baking.

She wanted to know what bread was like before the 1880s, when refined flour became widely available, so she studied sourdough. Her interest in old-fashioned wheat varieties began in the early 1990s, as she began to consider how contemporary wheats reflect the needs of industrial milling and factory baking, not the stone-ground flour she saw as superior. Her fascination with grains eventually became her study and profession.

“I wanted to grow the [wheat] varieties I had read about in history books, and I realized that the USDA Small Grains Collection would give you samples,” said Spiller. She grew out Sonora, Pacific Bluestem, Baart, Foisy, and other varieties. Collecting her annual selections from the plants that did well, she noticed that these varieties grew taller than modern wheats, and would shade out the weeds, making them perfect for organic farming.

In baking with early landrace varieties, she also found culinary traits worth pursuing. She started the Whole Grain Connection in 2000 with a view toward promoting a small selection of varieties and providing farmers with seeds.

“Sonora was so attractive because we know its history. It might have been the first wheat introduced on this continent, and it was very successful in the southwestern region of North America,” she said.

There are no native wheats in the Americas—corn is this land’s native grain. Many groups of immigrants brought their own varieties, and the ones that survived did so because they thrived where people settled. Sonora, a Mediterranean type of wheat, grows well in Mediterranean climates. Heartier Russian wheats were planted in the Midwest. The Amish brought spelt to Ohio.

These grains began to disappear as production and milling centralized, and plant breeders targeted traits that were best for refined flour. America let go of the grains that had been our amber waves, and 125 years of white flour—farming, milling, baking and eating—won’t go away overnight.

The multiple dialogues that began at Bread Winners are continuing. People see the need to speak up for these new old-fashioned flours, and for women who are championing these grains.

Miller Nan Kohler already works hard on the education aspect, creating online and instore materials that detail how her flours perform. The Bread Winners talk also demonstrated the need to host more classes at her mill in Pasadena. The bread classes she runs sell out immediately, and she knows she has to help people get to know her product.

“I want to change people’s baking repertoires, and that takes a lot of dialogue because each grain and each grind is unique,” said Kohler. She wishfully joked about having a weekly wheat radio program dedicated to answering questions about alternative grains and flours.

Baker Roxana Jullapat left the event in Los Angeles fired up to create a professional network to share baker-to-baker questions, and get recipes out to help people bake with heritage flours in their homes. Now is not the time to be proprietary about recipes, she said.

The bakers and farmers all agree on the importance of supporting women-owned grain and bread businesses. Leyna Lightman, also from the California Grain Campaign, started a Google doc with names in the L.A. area after the event.

Of course, finding women-run bread businesses isn’t easy. Many appear at farmers’ markets or as subscription-based community supported bakeries (CSBs). This is because the same dynamics that restrict women from advancing in other entrepreneurial spaces are at work in baking. Panelists Kate Pepper of Kate’s Bread, Christine Nelson of Demeter Bread & Pastry, and Crystal White of Wayfarer Bread have all turned to alternative venues like these when they couldn’t find the funding to establish a brick-and-mortar business.

“Many of us are thirsting for more representation, more visibility, and more kinship in the food world,” said Lightman. To that end, future events are in the works, including ones in cities like Portland, Oregon. The goal is to stretch beyond women, too, and amplify all new voices in the artisan baking community, including people of color and gender non-conforming folks.

“We want to create real-life solidarity, and opportunities to repeat the sparks that happened at the first Bread Winners talk,” said Lightman.

Kris Kohler recorded the Bread Winners event; the audio is embedded below and available on Soundcloud.