Black Farmers Reviving Their African Roots: 'We Are Feeding Our Liberation' | Civil Eats

Black Farmers Reviving Their African Roots: ‘We Are Feeding Our Liberation’

Community farmers in D.C. say crops and methods of their African ancestors hold an essential key to restoring Black health. 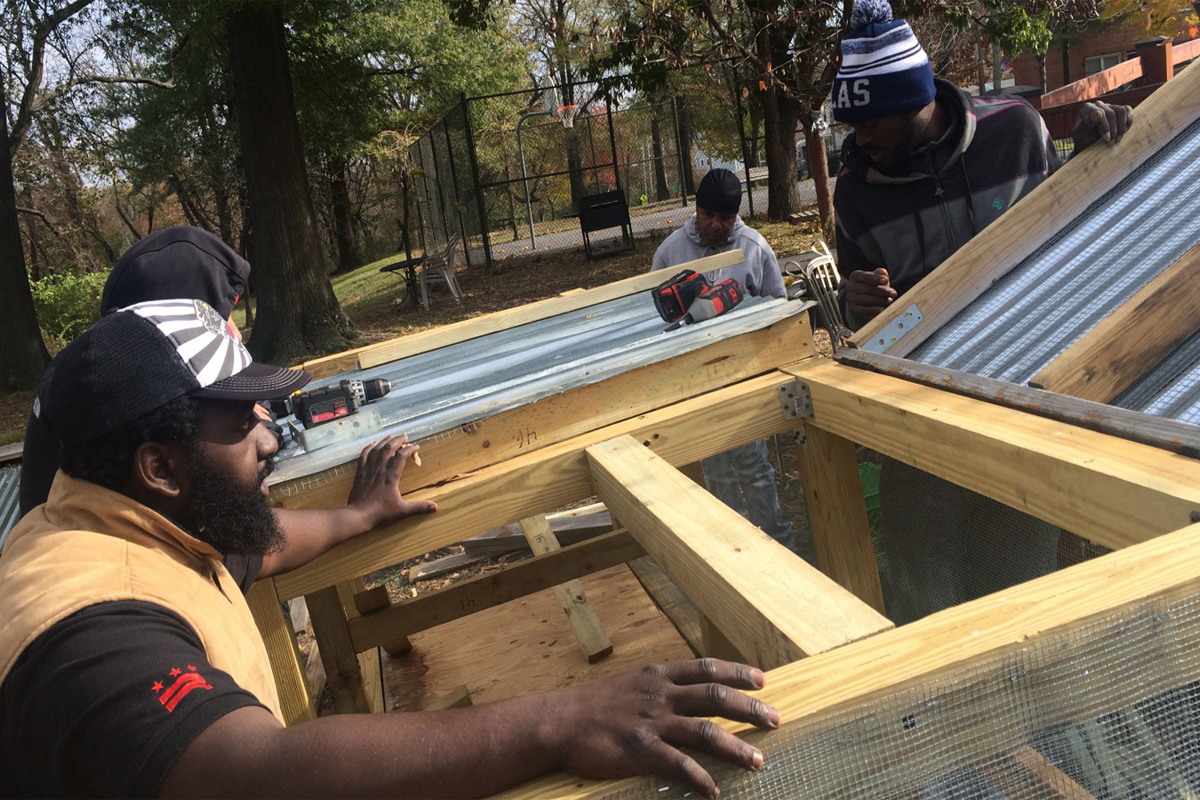 One Saturday morning in November, Xavier Brown was working in the Dix Street community garden in northeast Washington, D.C. The garden is near the Clay Terrace public housing complex in the heart of the city’s Ward 7, home to about 70,000 people, 94 percent of whom are African American.

Brown worked alongside six formerly incarcerated men to build a compost bin big enough to generate 1,200 pounds of rich soil, or what they call “black gold,” out of neighborhood food scraps. The compost is an essential ingredient for growing crops in the 32 garden beds they also made from donated and recycled plywood.

Within a few hours, more bins were close to being finished, with dozens of feet of steel hardware cloth protecting the food scraps inside from rodents and other animals.

“It was not looking like this this morning,” Brown says in amazement.

Brown formed a partnership with Boe Luther and Wallace Kirby, two gardeners from Ward 7 who started Hustlaz 2 Harvesters to offer people released from incarceration ways out of poverty into urban agriculture careers and other social enterprises. Brown, a certified master composter for the city, helped Luther and Kirby transform an empty lot into the Dix Street community garden as part of an urban agricultural initiative called Soilful City.

Only 1 in 10 Americans eats the daily recommendation of fruits and vegetables, according to the Centers for Disease Control and Prevention, and people living in poverty have especially low rates of consumption of fresh produce. Access to healthy produce is difficult in low-income communities like Clay Terrace, because major chain supermarkets are reluctant to locate their stores there. Ward 7 has only one large grocery store, and that means the people who live there have a harder time obtaining more fruits and vegetables to help reduce cardiovascular risk.

Yet Brown, Luther, and Kirby believe the community can grow its way out of food scarcity through the Dix Street garden and similar projects. They say crops that were staples of their African ancestors’ diets hold an essential key to restoring the community’s health.

“Black people need to return to being growers, builders, and producers, so when we’re consuming, we’re also feeding one another, and we’re feeding our liberation,” he says.

For instance, to transform the food landscape in Washington, D.C., Brown, Kirby, and Luther helped a neighbor grow bodi, a long string bean indigenous to central Africa. The bean provides many nutrients that are routinely missing from most Americans’ diets, including fiber and vitamins. In D.C., it’s helping reconnect the local population to their cultural heritage.

At the same time, the work of planting and harvesting helps build an environment and community that can facilitate healing from the traumatic legacy of land-based oppression—from slavery to more modern practices of racist covenants and housing redlining—that Black people in the United States have endured.

“This is the generation that only sees [agricultural work] as a part of plantation slavery,” Kirby says. He says the neighborhood used to be filled with garden beds and chickens, because most of the families had come from the rural South and brought their way of life with them.

A lot of that rural character was then lost, especially after the 1968 riots that tore through the city after the assassination of Martin Luther King, Jr.

“After the riots, everyone wanted to disconnect with the Earth, with nature; they didn’t see the value,” he says. His eyes widen as he describes destroyed backyard gardens, Black businesses looted and burned. The community’s connection to land and its spirit of self-reliance broke.

Brown hopes to mend that rift by looking to African roots. He has adopted a practice called Afro-ecology, a theory and practice created by fellow urban farmer Blain Snipstal to describe how Black people in the U.S. can reconnect with their African or Afro-indigenous past through traditional planting and harvesting techniques.

“Afro-ecology is reorientation of our connection to the land, an organizing principle, and the way we express our culture while we grow food and grow healthy people,” Brown says.

Using food and farming to overcome the trauma resulting from a history of land oppression and racism is work Leah Penniman knows well. She is a farmer and food justice organizer in upstate New York at Soul Fire Farm, where hundreds of new Black, Latinx, Native American, and Asian growers come to participate in agricultural training workshops that focus on healing people as well as the land.

Penniman sees delving deeply into the history of food injustice—effectively naming racism as the problem—as the first step in search of better solutions to structural realities of food injustice. At Soul Fire, Penniman discusses the hundreds of cases of Black farmers being cheated out of or driven off their land in 13 Southern and border states from the Civil War up to the 1960s.

The next steps involve learning the history of African agriculture and how it was transplanted to the Americas and became intertwined with the suffering and generational trauma of slavery. She wants to transform that pain into power, allowing Black farmers to take on the role of a griot, or a traditional African storyteller.

“We’ve replaced that story with a different story of ‘I’m harvesting a plant that’s sacred to my people and I’m harvesting a crop that will benefit my community in these particular ways,’” she says. “So, we are ‘deprogramming’ the victim mindset, the reactive mindset, and instead connecting with our ancestral way of being [on the land], which is a proactive mindset with agency and power.” 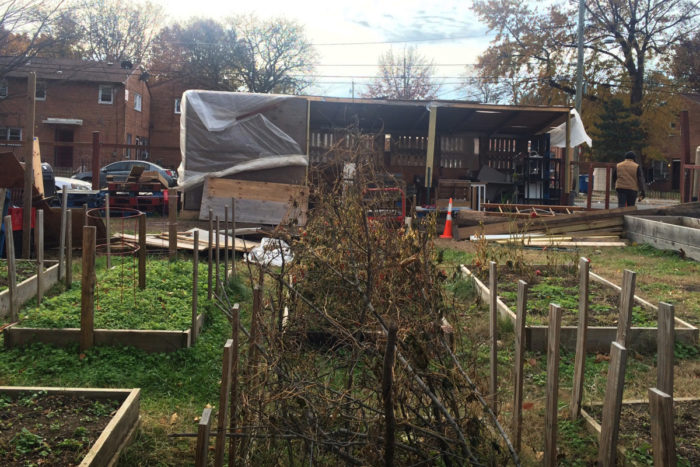 Similarly, Soilful City’s project connects recently released inmates and other community members of Clay Terrace to planting and harvesting methods rooted in the African diaspora, and their collective work authors a new story of self-determination and healthy food access for the neighborhood. At the same time, the farm is helping people develop work skills and producing needed revenue in the community, while also providing other urban agriculture businesses, like the legal marijuana industry, with composting and high-yield soil.

“I believe we can dominate the composting landscape in D.C. and have a model to take elsewhere,” Brown says.

If the rates of obesity, diabetes, and lower life expectancy in the neighborhood are reduced as a result, that will be just one more sign of the success the project is having in the community in repairing the broken relationship between the urban population and the land.

Another sign of hope is the vibrant red fish peppers growing in the garden beds, a crop originally from the Caribbean that nearly died out before it was salvaged by Horace Pippin, a painter who saved many rare seeds used by fellow Black gardeners in the 1940s.

Brown and Winford James, one of the men building the compost bin, started a micro-enterprise to bring a sweet and spicy hot sauce recipe they make from the fish pepper to market. Soilful City is changing communities, James says.

“Every farm I’ve ever been to has been with Xavier,” he says. “By helping them help the community, I’m also helping myself.”

This article, which was funded in part by a grant from the Surdna Foundation, originally appeared in Yes! Magazine’s Decolonize Issue, and is reprinted with permission.