After a Decade of Promises, Has the Food Industry Made Progress on Gestation Crates?

Hundreds of food retailers and giant pork producer Smithfield have pledged to eliminate gestation crates for pregnant sows, but confinement is still the norm. 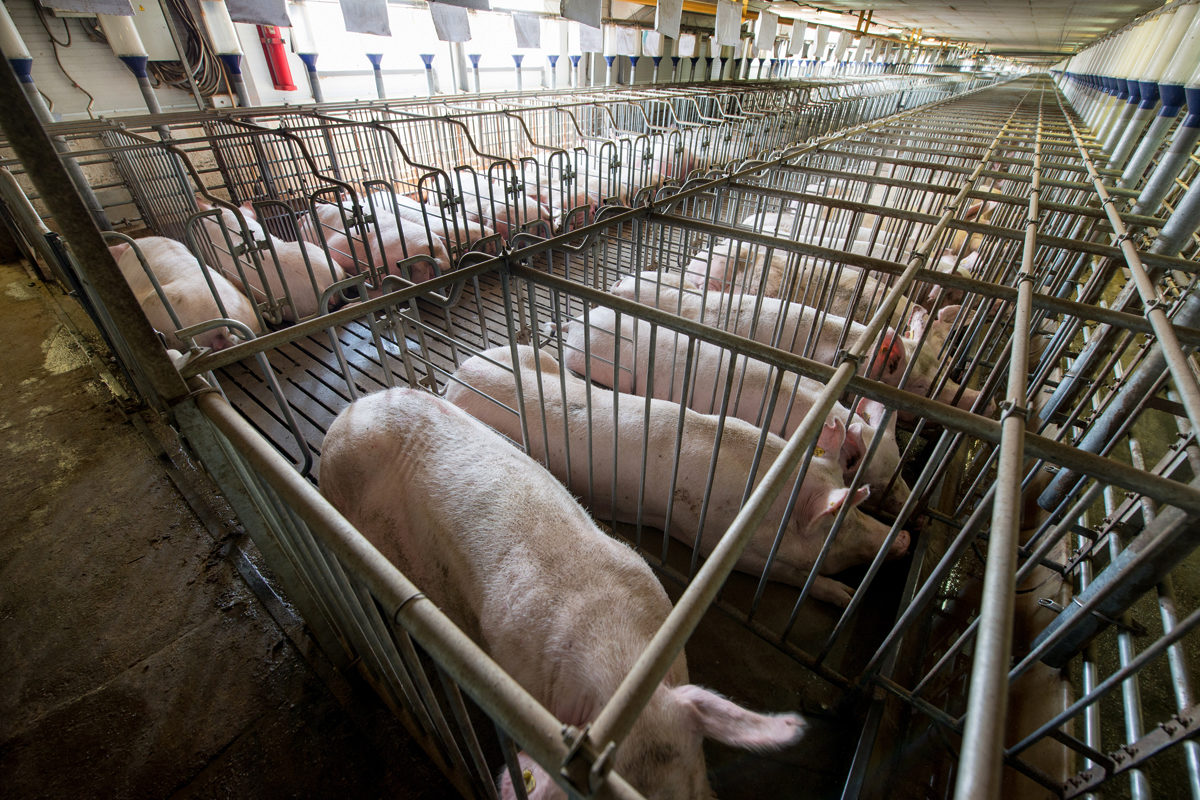 In early January 2018, Smithfield, the world’s largest pork producer, announced that it had achieved its “animal care” goal to provide group housing for pregnant sows on all of its U.S.-based farms. Over the course of 10 years, and with a $360 million investment, the company claimed to have transitioned its operations away from individual stalls, known as gestation crates.

Since the 1970s, gestation crates have been standard housing in most hog-breeding facilities nationwide. For the nearly four-month duration of her pregnancy, each sow lives, eats, and sleeps in a roughly two-and-half-by-seven-foot stall that does not allow her to walk, turn around, or socialize. After giving birth and living in a slightly larger farrowing crate for a month, she is impregnated again and returned to the stall. The cycle is repeated for three to four years until her production drops off, and she is slaughtered for breakfast sausage.

“These animals are raised like they’re parked cars, side by side, cage next to cage in a giant warehouse,” said Josh Balk, vice president of farm animal protection for the Humane Society of the United States (HSUS). “If this practice was done to dogs or cats, it would be illegal. But it became standard in the pork industry.”

Over the past decade, this restricted form of sow housing has become one of the primary targets of public pressure, activist exposés, and state legislation aimed at ending extreme confinement for farm animals. And food companies up and down the supply chain have come under fire, and bowed to consumer demand for more humane treatment of farm animals—at least on the surface.

Between 2012 and 2015, more than 200 food companies—including meat producers like Cargill and Hormel, food service providers like Aramark and Bon Appétit Management Co., restaurant chains like McDonald’s, Burger King, and Wendy’s, and retailers like Kroger, Safeway, and Costco—all pledged to do away with gestation-crate pork. And while most of these companies expect to hit the target by 2022, it’s unclear whether the food industry as a whole will make good on its promises.

Gestation crates remain the standard on over three-fourths of U.S. hog farms today, according to the National Pork Producers Council (NPPC). And 98 percent of producers use gestation stalls at least some of the time, such as immediately after artificial insemination.

As the first major company to commit to phasing out gestation crates in 2007, Smithfield’s recent announcement sounded like a watershed moment for the pork industry. “Smithfield represents 25 percent of the sows in the U.S.,” Balk said. “They have taken positive steps, I would say—they are now using group housing for sows where they are able to live in large pens.”

“[But] it’s not old MacDonald’s farm,” he continued. That is, the animals are still confined indoors and spend their lives on concrete floors.

The existence of these crates also poses larger questions about whether it’s possible to keep sows in confinement and keep them healthy. Many pork producers contend that gestation crates allow them to readily monitor each animal’s health and feed. But with the advent of monitoring systems, such as electronic sow feeding (ESF), the main concern is aggression. Especially when pregnant, sows that are not dominant can become severely injured because of the strict social hierarchy among hogs in group situations.

“Farmers are using gestation stalls because, after years and years, they have found they work best for insuring health of sow and health of piglet,” said NPPC’s Dave Warner.

There is also a strong sentiment within the industry that animal husbandry practices should not be dictated to a country of independent pork producers. “We don’t advocate one system over another,” Warner said. “We also believe that any particular system that’s working for the health of sows shouldn’t be eliminated just because some group thinks that it should.”

While research shows advantages and disadvantages to both gestation stalls and group housing systems, many animal welfare advocates see the small confines as inhumane and believe that issues like aggression can be overcome with thoughtful animal management. They applaud the steps producers and retailers are taking to cut down on the crating practice.

But the question for those interested in animal welfare is whether company commitments make any real difference at all.

Over the last 10 years or so, immense public pressure has mounted to abolish farm animal confinement.

Walmart’s own research found that 77 percent of its loyal shoppers said that they would have greater trust in a retailer that abided by humane animal welfare practices. And since 2002, voters in 11 states have expressed their beliefs in ballot measures that ban one or more forms of animal confinement, including hen battery cages, veal crate stalls, and sow gestation crates.

Massachusetts voters took the referendum even further in 2016 when they banned all housing systems that do not allow animals to turn around, lay down, stand up, and move freely. Even more significantly, the legislation, slated to go into effect in 2022, outlaws the sale in Massachusetts of any animal products raised in extreme confinement conditions from any other state. HSUS, which helped to pass Proposition 2 in 2008 in California, is currently campaigning in California for a similar initiative to appear on the November 2018 ballot.

However, the public’s general rejection of animal confinement has not yet made inroads in the major pork-producing regions of the country. The 11 states that ban some form of confinement, including Florida, Arizona, Maine, and Oregon, represent just 7 percent of the 200 million hogs and pigs sold each year, according to 2012 Census of Agriculture data. And the nation’s top three states in pork production and sales—Iowa, North Carolina, and Michigan—do not currently have referendums or ballot initiatives banning the practice. If a recent Iowa law that supports producers using tight confinement of egg-laying hens is any indication, major agricultural interests in these states are likely to resist significant changes.

The retail food industry has responded to consumer concerns by making its own promises, starting with McDonald’s in 2012. “McDonald’s believes gestation stalls are not a sustainable production system for the future,” said Dan Gorskey, senior vice president of McDonald’s North America Supply Chain Management in a statement at the time. “There are alternatives that we think are better for the welfare of sows.”

The fast food leader’s pledge kicked off a wave of similar commitments but few companies have submitted progress reports on their efforts. Panera Bread recently shared its animal welfare report, stating, “100 percent of bacon, breakfast sausage, and ham served on sandwiches and salad was raised without antibiotics and was gestation-crate free.” But the salami in its Italian sandwich brought the company’s total pork supply down to 90 percent.

The global food-service giant Aramark has reported 30 percent progress on its declaration to eliminate gestation crates from its supply chain by 2022. In 2017, Kathy Cacciola, Aramark’s senior director of environmental sustainability, confirmed to Civil Eats that the company is on track with suppliers to meet its goal.

Because most companies self-report this kind of progress, however, transparency is an ongoing challenge. Take the case of battery cages for egg-laying hens. After legislative actions combined with consumer pressures motivated hundreds of companies in 2015 to commit to going 100 percent cage-free within 10 years, Compassion in World Farming followed up by contacting companies directly and urging them to publicly disclose their progress.

“A commitment is just words on a website until those words are put into action said Nancy Roulston, director of corporate engagement for the American Society for the Prevention of Cruelty to Animals (ASPCA).

Converting promises into procurement standards and supplier contracts is a ponderous process. Even though the largest retailer in the world, Walmart, has thrown its weight behind the issue and asked its suppliers to phase out gestation crates, change has been mixed and murky.

HSUS is now focusing its efforts on getting companies to own up to their oaths. “There has been dramatic change,” said Balk of HSUS. “It doesn’t mean that we should expect that if we don’t keep an eye on things that things will transition by 2022.”

Setting the Precedent for the Smithfield Effort

Country View Family Farms, a family-owned pork producer founded on the outskirts of Philadelphia in 1895, was the earliest U.S.-based adopter of group housing—the alternative to gestation crates—and the first U.S. company to install the no-crate technology that Smithfield has adopted.

In 2001, Country View President Bob Ruth began experimenting with the electronic sow feeding (ESF) technology developed in Europe that allows sows to live in open pens using chips implanted in their ears that track and regulate their health, feed, and other activities. After formally testing the technology in 2007, Country View found that ESF was a “home run” for animal care and productivity, and the company has installed ESF in all new barns and remodels ever since.

Ruth admits that the injury rate at Country View is a “little bit higher” in the open pen system when compared to gestation crates. According to Sara Shield, behavior and welfare specialist for Humane Society International, the recent research bears this out.

“Once they establish a dominance hierarchy, fighting is minimal as long as the subordinate animals have enough space to avoid the higher-ranking sows,” she said. But research shows there are many ways to reduce aggression.

At Country View, all other measures—from medication use to longevity—are better with ESF, Ruth said, and the company is currently testing another European system that would replace restrictive farrowing crates and allow interaction between the sow and her piglets.

While Smithfield is now urging its contractors to follow suit, the company is still confining pigs in gestation crates for the first 42 days after insemination (full term is 114 days), a fact that was not touted in the January announcement.

Still, on the animal welfare front, this is big progress.

Meanwhile, consumer concern about animal products is still rising. Trader Joe’s is the latest retailer facing a petition drive to abolish gestation crates from its pork supply. Spearheaded by the animal welfare group Crate-Free Illinois, the campaign is targeting the popular grocer because it is one of the holdouts on taking a stance against gestation crates.

“When it comes to animal welfare, retailers have a tremendous amount of power to do good and to stop animals from suffering unnecessarily,” said the group’s leader Jessica Chipkin. “Even if it’s in 10 years.”

In response to questions about the petition, Trader Joe’s replied by email to Civil Eats, “We have heard, understand, and care about the concerns of our customers regarding the use of crates in the pork supply chain,” the email said. “As a result, we have clarified for our customers the products we carry that are from a crate-free supply. Additionally, in the next several months, we will be moving our fresh pork offerings to a crate-free [gestation and farrowing] supply and will clarify this crate-free attribute on the product labels for our customers.”

However, after a silent protest by Crate-Free Illinois at Trader Joe’s corporate headquarters in Monrovia, California last week, the company was unable to make a more specific commitment.

Demanding improved animal welfare on farms is relatively easy. But the true test will come when shoppers at retailers like Trader Joe’s, are faced with the higher prices associated with funding the transitional costs required to improve the lives of the pigs behind their bacon.

“When consumers support brands that have already eliminated cruel practices,” said Roulston. “They show other companies that they will lose business if they don’t follow through on promises.”