Can the Shinnecock Nation Save its Fishing Rights? | Civil Eats

Can the Shinnecock Nation Save its Fishing Rights?

The New York tribe has repeatedly faced state laws encroaching on economic and food sovereignty. Now it's fighting back. 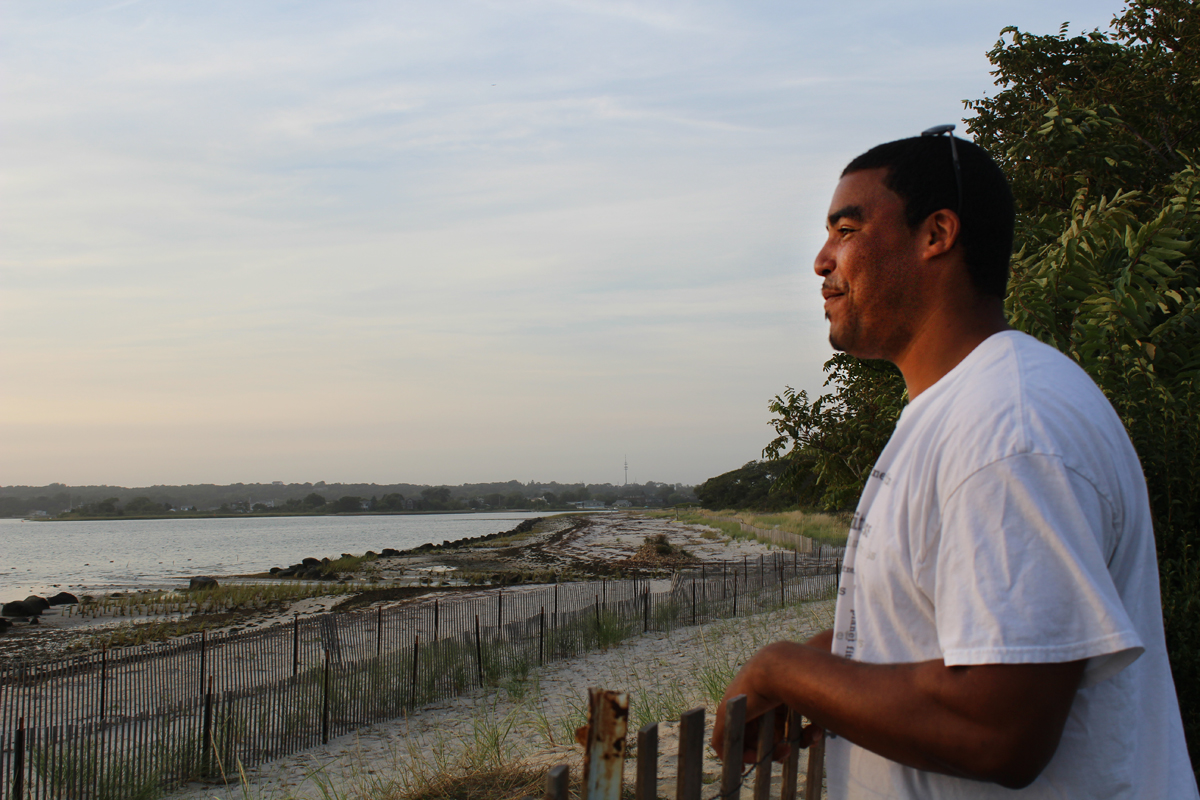 Sunrise was just breaking when David Taobi Silva walked out of Heady Creek after checking his eel nets for catch from the previous night. It was April in Southampton, New York, near the far eastern tip of Long Island, and the mornings were still cold.

The 42-year-old has been fishing in this creek since he was a boy, although he usually accessed it from the western side, from the Shinnecock Indian Nation Territory. That day, however, he’d decided to park his car on the creek’s opposite shore, in the so-called “estate” section, where houses sell for north of $5 million dollars—a very different neighborhood than the one filled with mostly one-story abodes on the other side of the creek.

When he got out of the water, Silva was surprised to see two New York State’s Department of Environmental Control (DEC) agents waiting for him. A former tribal leader, Silva expected that once he identified himself as Shinnecock, the agents would let him go on his way, as tribal members are not bound to the fishing and hunting regulations that other New York citizens must follow. But to his surprise, they ticketed him, seized his net from the water, and made him wait for hours on the dock for another officer to arrive. In addition to the loss of his nets and the $500 worth of eels he had caught earlier, Silva now faces fines that could exceed $80,000.

“It feels like we are being targeted,” said Silva, who filed a civil rights complaint in Suffolk County Court in late November. One of the arresting officers had been involved in five previous incidents with Shinnecock, all of which were eventually dismissed due to lack of jurisdiction. Silva’s complaint, which is still in process, states that the repeated arrests constituted harassment of the Shinnecock. 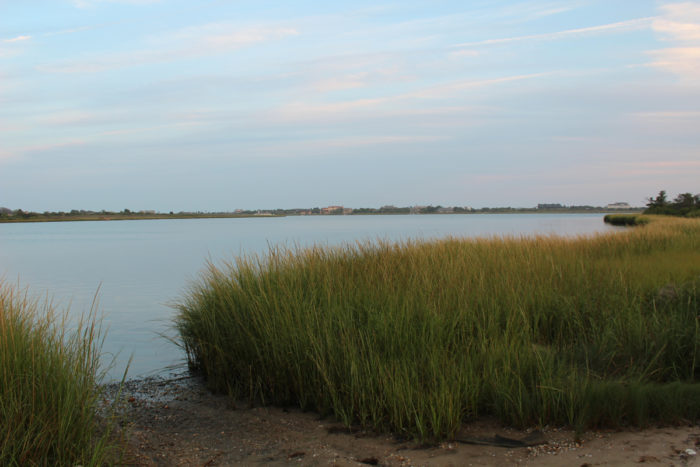 The view from the Shinnecock Indian Nation Territory across Shinnecock Bay to the mansions that dot the other side. (Photo by Alexandra Talty)

For the Shinnecock, confrontations with state authorities have become routine in recent years. Despite a contract with English settlers dating back to 1648, wherein the Shinnecock reserved their rights to the waters and shores in perpetuity, tribal members have been ticketed for fishing repeatedly over the past 15 years. The cases, however, are always dropped in court due to the lack of jurisdiction. In addition, Silva notes that U.S. code 1948 explicitly requires New York State to honor all previous treaties with Indian tribes with regards to hunting and fishing rights. Silva will return to court on March 19 to continue his fight against the ticket.

In practice, state law limits the Shinnecock’s ability to sell their catch—tribe members can sell any marine life directly from the reservation, similar to how Native Americans can sell untaxed cigarettes or alcohol. But no restaurant or wholesaler can legally resell them in New York State.

Gathering food from the water is an indigenous tradition integral to their lifestyle and identities. And because tribal leaders estimate that 40 percent of tribal members live below the poverty line, expensive commercial licenses are out of reach for most, and the ability to fish for sustenance is especially important. Many tribal members also believe that the fisheries are mismanaged by the state and would like to the chance to participate in the process of setting fishing quotas and environmental regulation.

Running Up Against Regulations

Tribal members are living in what they consider a legislative loophole, wherein longtime treaties explicitly reserved rights that more recent state marine protections limit. Every major Shinnecock contract has reserved the tribe’s hunting and fishing rights, stating that if the tribe sells off parcels of land, tribal members are still allowed to conduct activities on it, such as collect seaweed or harvest the meat and bones from beached whales.

“The federal government and state government need to get their rights from us,” explained Johnny Smith, a Shinnecock tribe member, medicine man, and shop owner. 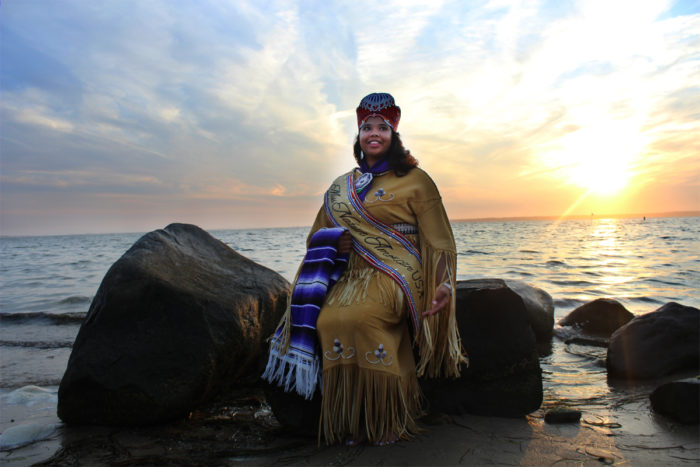 Complications arose starting with the Fishery Conservation and Management Act of 1976, which ignored these treaties and made blanket marine protections.

“Illegal possession of shellfish, illegal harvesting of shellfish, illegal possession of undersized fish—those are the tickets that we usually get [as a result of the 1976 Act],” said Shane Weeks, a 28-year-old Shinnecock tribal member, artist, and commercial fisherman, who has also been working to establish a commercial eel fishery on the tribal territory.

The goal is to harvest lucrative glass eels from the waters around the tribe’s land, which can fetch as much as $2,500 per pound during peak market times. The number of eels has dropped significantly in Maine’s nearby fishery, further spiking demand. The Shinnecock also hope to study the mysterious fish and potentially breed it, although the species has never yet been successfully bred in captivity.

The Act’s passage has also prompted action from a number of tribes across the U.S.: Maine’s Passamaquoddy tribe and tribes in Western Washington have worked with (and fought against) those states’ legislatures to establish their own tribal commercial fisheries, paving the way for indigenous people across the United States to follow suit.

Although the DEC recognizes the rights of the Shinnecock to fish within their boundaries, the agency said in a formal statement to Civil Eats, “Native Americans are not exempt from fishing regulations … The state’s laws are in place to protect the depleted species, American eel, and sustain its future in New York water.” 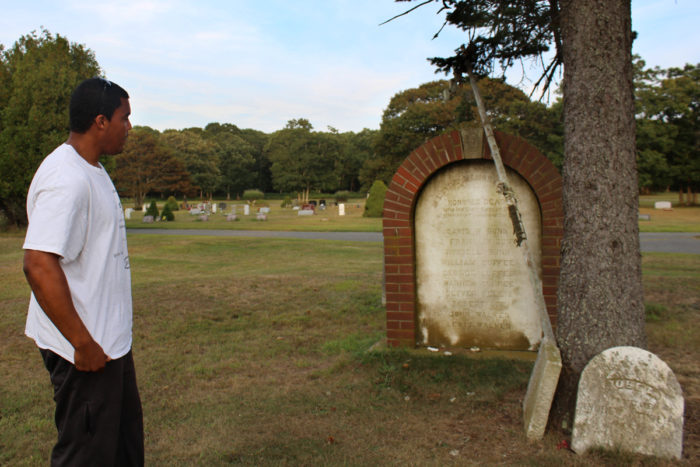 Shane Weeks looks at a memorial for the 10 Shinnecock men who died in the 1876 shipwreck of the Circassian off the coast of Mecox Bay in Bridgehampton. Tribe members point to their long history of maritime traditions as part of their fight for fishing rights. (Photo by Alexandra Talty)

“The alarm bells are beginning to ring,” Polite said. “What’s next? Our hunting rights?” In Southampton Town, Shinnecock are not restricted to the same seasons as other recreational hunters and are also able to hunt animals such as wild turkeys.

Polite finds the situation extremely frustrating. He was on the tribe’s Council of Trustees in 2016 and visited DEC offices in Albany for a “good-faith meeting” at which they discussed setting up a Shinnecock regulatory department. In their discussions, they detailed a department that would issue permits to tribal members for sustenance licenses and at the same time better integrate the tribe’s program and licensing with the state. At that point, “sustenance was never in question,” Polite said. “Neither was our fishing rights in terms of not [being able to take] it to the market.”

Multiple tribe members told Civil Eats that they sent at least a few certified documents to New York governor Andrew Cuomo’s office to advocate for their marine access rights, but never received a response. The governor’s office did not respond to a request for comment.

Like the Shinnecock, the Passamaquoddy tribe, which established a commercial fishery in 1997, also hopes to establish an eel fishery. Freddy Moore III, former chief of the tribe, feels heartened by the effort, as it has prompted some younger tribal members to work in a culturally sustainable way.

“Tribes around the country have been buying into an economic model that is inconsistent with the nature of our life,” said Moore. “They are chasing casinos, manufacturing plants, and facilities as if that will elevate our quality of life… [but] there is a cost associated with that.”

Moore believes that the effort to establish casinos has pitted elements of tribal leadership around the country against the establishment of fisheries. Instead of chasing what he calls “borrowed models,” he believes the most important thing a tribe can do is establish their own food sovereignty.

“If the time comes when our people look to the marine environment as a means of sustaining their very lives, and we haven’t protected that, we will be in very big trouble,” said Moore. “Either allow us to feed ourselves, or feed us in jail.”

Now, younger tribal members tell him they feel the spirit of their ancestors when they are fishing, he said.

Still, Shane Weeks worries that the next generation of Shinnecocks, as well as those who did not grow up on the reservation, will forget that these rights and this heritage exists. “We don’t fish as much as we used to; my dad’s generation grew up having to hunt to eat,” Weeks said.

Passamaquoddy’s Moore believes that the burden of proof is on the state to show that they have the authority to legislate the activities of indigenous people.“You can’t legislate identity,” he said. “Your identity is a human right.”