This Revolution Will Be Farmed | Civil Eats

This Revolution Will Be Farmed

With roots in the Occupy Movement, the Experimental Farm Network seeks participatory plant breeding on a massive scale. 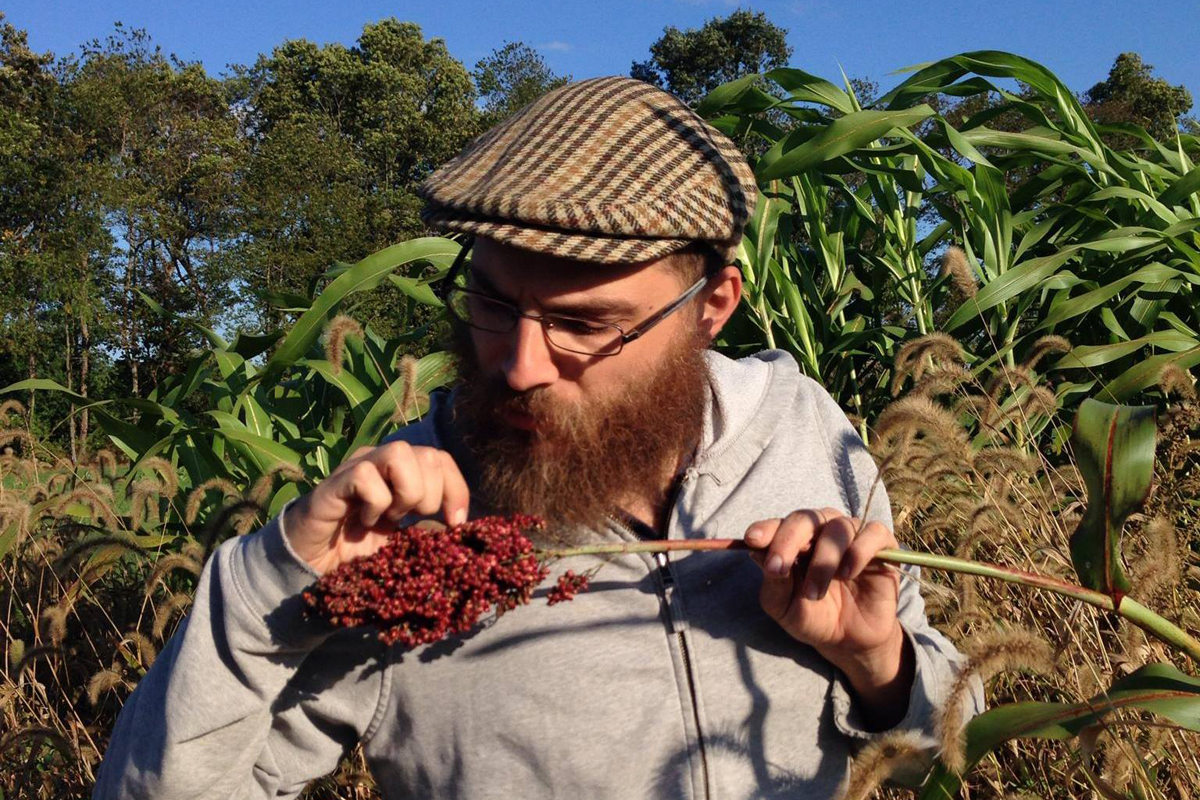 A long-bearded, bespectacled Nathan Kleinman is standing inside a hoophouse in Southern New Jersey he proudly announces he got for free from a local farmer. Excitedly, he holds up plastic baggies containing his latest accessions of seeds. “These are Chinquapin chestnuts—they’re sweet and small,” he says, pouring what look like dark brown cap-less acorns into his palm. Back into their bag they go so he can show off the rest of his prizes: “Korean stone pines—they’re really rare. Bittenfelder apples, which are good to use for rootstock. Oh, these are cool; they’re from monkey puzzle trees, which are native to Chile.” 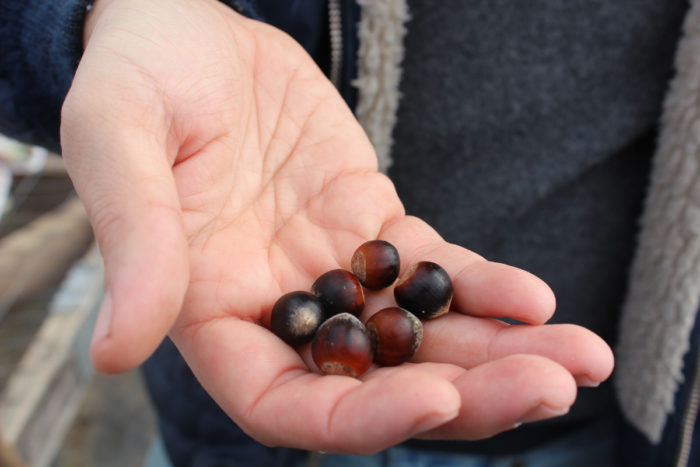 The tree seeds are all part of Kleinman’s ever-growing collection of perennials—plants that grow for more than two years and, critical for Kleinman’s purposes, have the ability to combat the effects of climate change. Later today, he will mix these and others with soil, vermiculite, and water, then set them in his fridge to germinate.

Outside, it’s a brutally windy winter’s day, with nothing in the frost-crusted fields beyond the hoophouse except a sprinkling of miraculously still-green sedum and moss, and the barren, woody stalks of a beheaded sorghum crop. But Kleinman is already thinking of spring and the potential it affords for a new season of agricultural activism.

Kleinman is co-founder of the Experimental Farm Network (EFN), a five-year-old nonprofit that aims to start what he calls a farming revolution. On the one hand, EFN is an open-source seed company, with about 80 hardy varietals of tomatoes, beans, squash, and peppers currently for sale on its website. More broadly, it’s a sustainable farming community with a mission to identify and breed carbon-sequestering perennials, relying for labor on a volunteer army of experienced and newbie agriculturists across the country.

At a time when the number of global plant species has been radically reduced, EFN’s efforts have the potential to preserve and expand biodiversity on farms. And, in true cooperative spirit, volunteers who produce seed from an experimental crop get a 50-percent share of its sale.

The Path to Food Activism

Kleinman grew up in a socially conscious household in Philadelphia, but the concept of food activism finally clicked for him after Hurricane Sandy hit the Northeast in 2012. He was living in Philly at the time and had recently abandoned a bid for Congress. After the storm hit, he joined relief efforts with Occupy Sandy, “mucking out houses, trying to make sure FEMA and Red Cross money was getting where it was supposed to go.” 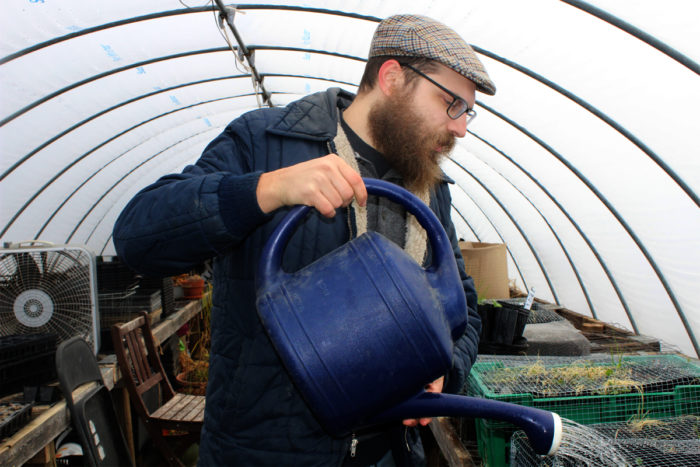 One day, driving around Sandy-ravaged farms in southern New Jersey, near Atlantic City, he remembers thinking, “Eventually, this community is going to be under water because of climate change. Changing the way we do agriculture is the only way to stop that. And we have to do it now.” He saw planting perennial crops, and engaging in agroforestry and other forms of “carbon farming,” to be vital to that effort.

Kleinman’s interest in foods grown by the Lenape and Nanticoke people led him to the discovery that he could, “get all this incredible stuff from the U.S. Department of Agriculture [germplasm system], plants you can’t find anywhere else.” He started collecting Native corn, squash, and beans and tried to cultivate them in the small plot behind his house.

Through Occupy, he’d met Dusty Hinz, an urban gardener from Minnesota, and found they shared a similar view of the world and how to fix it. The two started brainstorming; in 2013, they joined forces to form EFN, then got to work figuring out how to make it fly.

Kleinman and Hinz began by seeking out plant breeders who had already made headway in creating seeds suitable for unstable climactic conditions. 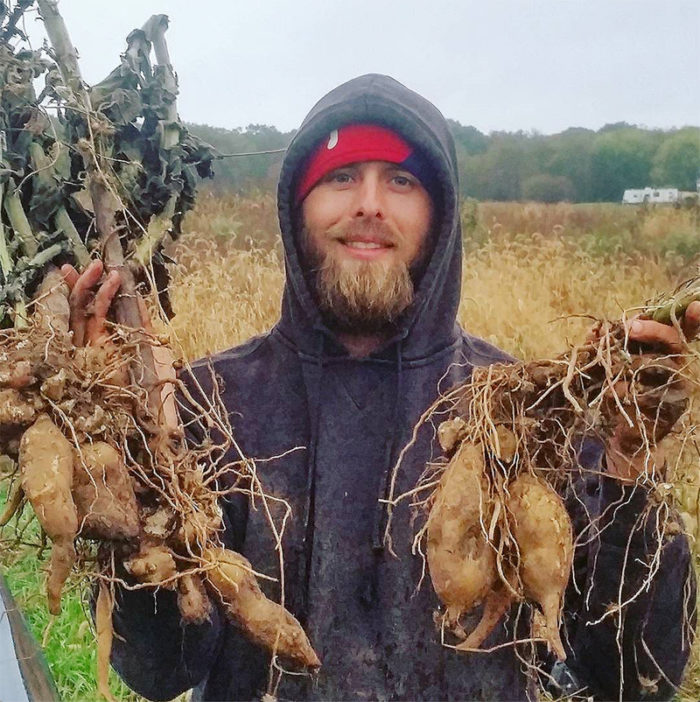 An early bit of luck came when William Woys Weaver, author of Heirloom Vegetable Gardening and steward of the renowned Roughwood Seed Collection—which Weaver’s grandfather started in the 1930s—put out a call for assistance on his farm. “We jumped at the chance to work with him and learn from him,” says Kleinman, who still occasionally volunteers with Weaver at his Devon, Pennsylvania, property. (EFN has since gone on to sponsor Weaver’s collection; Weaver now sits on EFN’s board, which includes several horticulturists and environmental activists among its ranks. )

Kleinman and Hinz were ready in earnest to put their newfound experience to use. Starting with free cuttings from the USDA—“basically, anything that looked interesting”—as well as seeds from breeders they met at conferences, they readied 500 accessions for planting on a plot they lined up in Northern Bucks County, Pennsylvania. When the farmer rescinded his offer to lease them land, EFN put out a call through their network for emergency acreage. 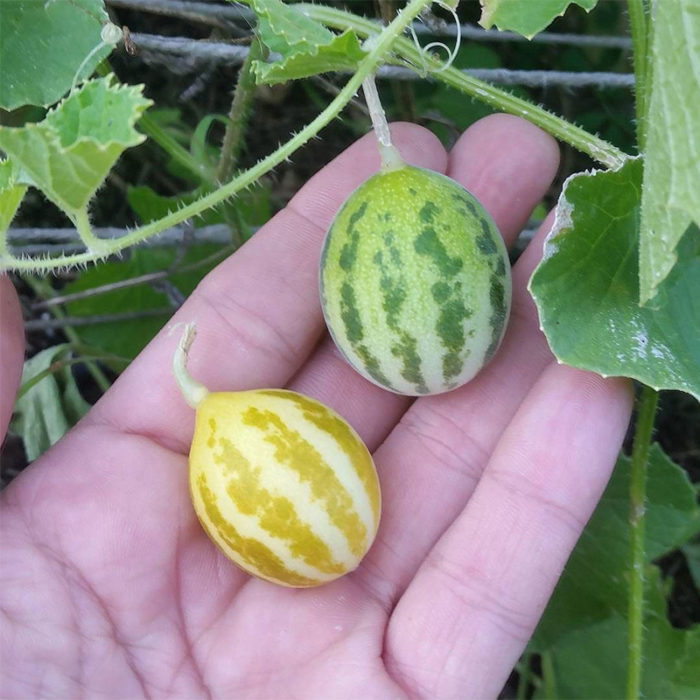 Mouse Melons (Cucumis melo. subsp. agrestis) originally from the Maldives in the Indian Ocean, grown by EFN in 2015. (Photo courtesy of the EFN)

This is how EFN got its first toehold on a long three-plus acre field in Elmer, New Jersey, a community near the one that prompted Kleinman’s farming epiphany. EFN now also has access to another 48 acres down the road from the plot. Additionally, Kleinman is about to purchase his own farm in upstate New York, and Hinz is returning to Minnesota to work land there. Fittingly, an organization with roots in Occupy’s decentralized system of management scatters wherever opportunity takes it.

The two meet some potential EFN stakeholders at agricultural conferences, but many come to EFN’s website on their own. Anyone can start or volunteer to participate in experimental seed-growing projects the organization has listed online. Kleinman is the lead on most of them, although right now, a Vermont rice farmer and an Oregon-based plant breeder are running grow-outs. 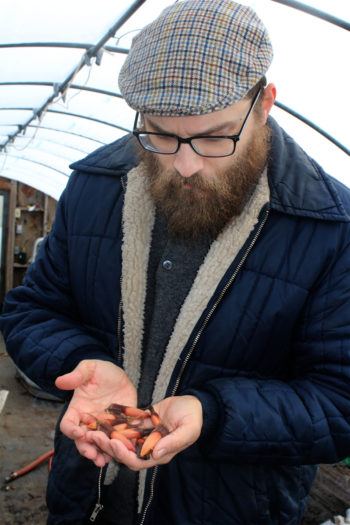 Each project comes with a particular set of needs from its volunteers, ranging from providing growth reports, to sending in cuttings for examination. The goal in all cases is to identify plants that can thrive in various zones and, most essentially, to produce seeds from them.

Working against a steep learning curve, Kleinman and Hinz have battled a slew of obstacles—like tobacco hornworms infesting their tomatoes—and adopted some ingenious solutions. For example, they keep their corn from becoming contaminated from nearby GMO cornfields by painstakingly covering tassels with bags to prevent wind pollination, then tickling each ear with a paintbrush in the fertile early-morning hours of summer.

Along the way, they’ve learned various secrets of plant breeding. “William Woys Weaver told us how, with the white box radish, you have to dig up each plant and check it to see if it’s the right shape and size and not cracked—then you dig the rest under,” recalls Kleinman. “That’s how you do plant selection.”

They’ve also worked to rescue old, obscure varietals from extinction and breed them: a pink-fleshed sweet potato shot through with purple and orange streaks, found at a now-defunct south Jersey farmstand; a mild, wild-growing leaf turnip that sprouts up in abundance, uninvited, all over the Elmer farm; a strain of wide-stemmed rhubarb that so far only Kleinman’s sister, living in Michigan, has succeeded in coaxing into bloom; and a cold-hardy, aphid-resistant perennial bush kale bred by a farmer in the Pacific Northwest. Kleinman is also producing his favorite crop of all, a sorghum from South Sudan that has abundant coral-colored seed heads and canes that can be pressed for syrup. 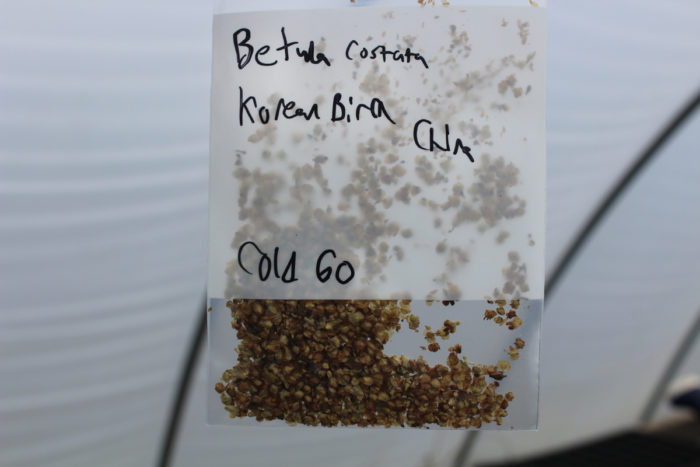 Going into this year’s growing season, EFN has assembled over 300 volunteers in 46 states to grow plants for 11 seed-development and -evaluation projects. Kleinman and Hinz are also on-track to pay themselves salaries for the first time, thanks to booming seed sales.

But there’s a lot more organizing ahead—and a planet to save. Next, Kleinman wants to reach out to isolated pockets of rural farmers and convince them to grow profitable chestnut and hazelnut trees for what he recognizes is a super long-term project. He also wants to rally young, would-be agriculturists with access to land in perpetuity and start them growing perennials.

He wants to convince us all to eat more sustainably and to grow a lot more of our own food, wherever we live. And he’s got just the seeds to get us started.