At This Pop-Up Lunch Counter, Race Is Included in the Bill | Civil Eats

At This Pop-Up Lunch Counter, Race Is Included in the Bill 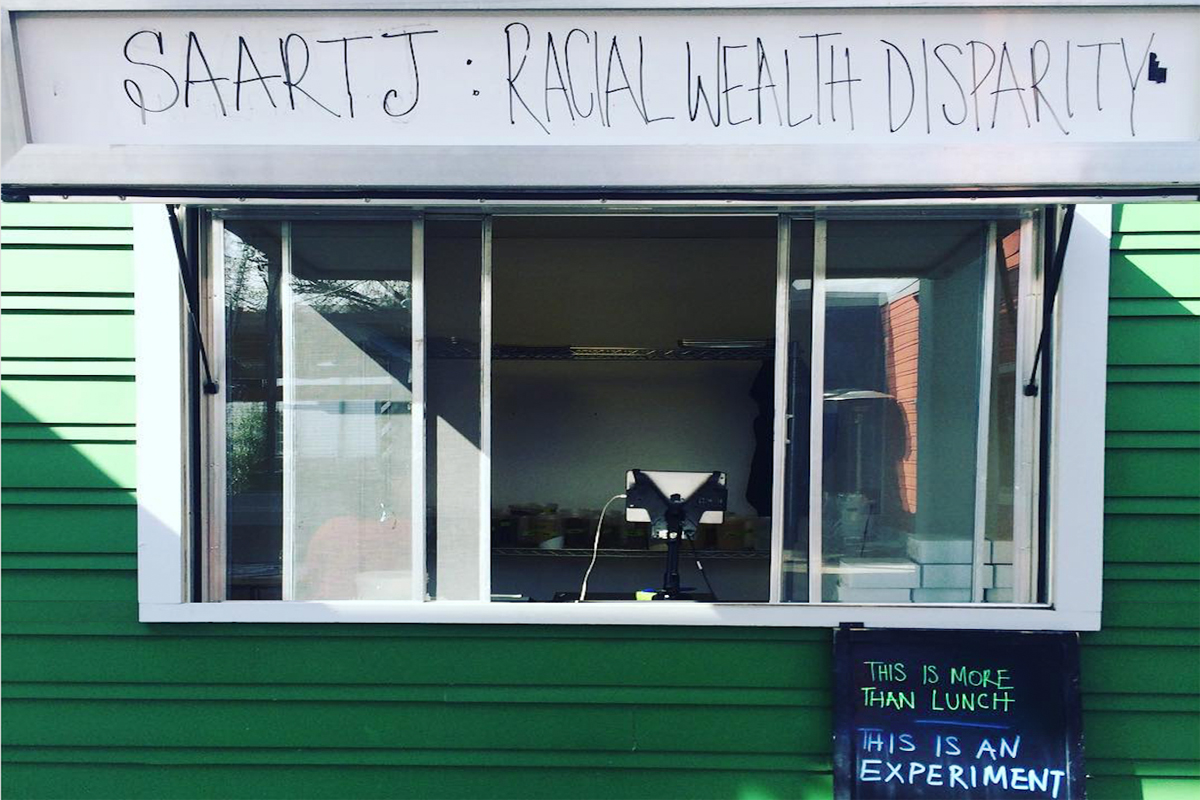 “Give me 15 minutes and I’ll change your life.”

This was the caption on Tunde Wey’s Instagram post announcing a pop-up for the month of February in the Roux Carré outdoor food court in New Orleans.

The pop-up, which ends on March 4, is called Saartj, and on the surface it looks like any other shop in the food hall: the menu is Nigerian and the dishes vegetarian, an ode to the chef’s upbringing. The atmosphere is that of a quick-service lunch counter where guests grab lunch quickly and return to their office or find a spot in the food hall to sit and eat.

After the guests order from a menu that includes dishes like fermented cassava dumpling and fried plantains with palm oil-blanched peppers, the experience starts to differ from the other stalls in the food court. After they order, Wey tells each diner about the nation’s racial wealth gap, pointing to stark facts, such as higher education increases a Black family’s median income by $60,000, where as it increases a white family’s median income by $113,000.

“I start by asking them what they think the racial wealth gap is and then share stats about [how it manifests in] New Orleans and nationally,” he told Civil Eats.

At the end of his speech, Wey presents his guests with two options: White customers can either pay $12 for lunch or the suggested price of $30. Black customers are charged $12 and also given the option to collect the $18 paid by a white patron as a way to redistribute wealth.

The whole interaction takes only about 15 minutes. And Wey and his team run the pop-up—which continued Wey’s history of using food to explore issues of race, class, and justice—like a cross between a social practice art project and a social experiment, collecting data from diners while they waited for their food through a survey that asks questions such as, “have you ever inherited money or received gifts from family like a car, college tuition payments or other high value gifts?” If diners respond yes, they are asked how this has changed their lives.

chicken feet pepper soup with like lots of colors and shit. everyone gets a free cup if you know the answer to the question: what’s the disparity in median net worth btwn white and black households? 10x is the answer—let that sink in. soup’s still free, pairs well with incredulity ?

Saartj is named after Saartjie Baartman, a Black South African woman who was lured to Europe by a doctor in the 1700s, and renamed Venus Hottentot. Wealthy Europeans could pay to have her come to their home where they could watch a “demonstration” or touch her body. When she died, her body was dissected and her brain, breasts, and butt put on display at a Paris museum until 1974. “Baartman’s story represents … the objectification and exploitation of Black, African, and female personhood,” Wey wrote on the website for the pop-up. “Our dinners are about confronting exploitative systems operating heartily, if sometimes covertly.”

Using the quick-serve model, Wey hoped to demonstrate that even an occasion as common and as seemingly simple as picking up lunch can be an opportunity to examine the role that these systems play in your everyday realities. And the event has brought a month’s worth of conversations with diners about the impact of race on wealth. Wey said he has seen “positive social pressure” perceived by white diners that makes them feel like they have to do something to “right” the wrong of the racial wealth gap.

“Most of the time we tend to identify the problem, assign an antagonist, and address the problem,” he told Civil Eats. The breakdown of diners was 46 percent Black and 45 percent white. Wey said 78 percent of the white guests who visited the pop-up chose to pay the higher amount. And that the fact that he, a Black man, did the asking, is part of the reason that that number is so high.

“Refusing to pay more comes off as anti-social and people don’t want to be judged for that,” Wey said. “People look on the other side of the till and see me standing there and they’re thinking that I’m judging them.” White guilt was definitely a factor. “If they couldn’t pay a higher amount, they gave a me a list of caveats why they couldn’t.”

This is not the first time that Wey has used food and dining to address the significant gap between wealth held in white and Black communities nationwide. In 2016, Wey created a series called Blackness in America that explored the issue. Then, in 2017, he hosted 44: A Table for 44, a dinner series in Memphis that invited guests to have dinner together and hear readings about societal and structural racism and money. 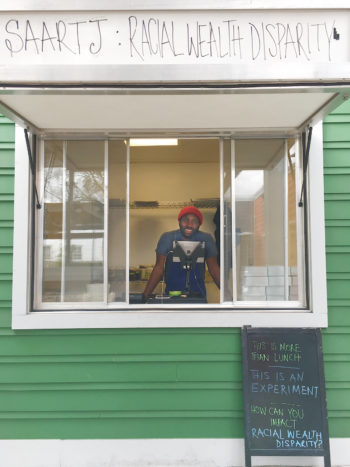 Tunde Wey at the counter of Saartj. (Photo courtesy of Anjali Prasertong.)

“The idea was based on Jay Z’s ‘4:44’ album and the idea that capitalism and wealth can save Black folks,” Wey said. “’Financial freedom’s my only hope’.”

Now, Wey is continuing that conversation with a look at how some of that wealth may be redistributed.

“The current racial wealth gap is very much the result of decades of discriminatory public policy,” said Janelle Jones, economic analyst at the Economic Policy Institute. “Besides facing discrimination in employment and wage-setting, for generations even those African-American families that did manage to earn decent incomes were barred from accessing the most important financial market for typical families: the housing market.”

Even after the policies that made these practices possible were dismantled by the Fair Housing Act in 1968, Black families could still be discriminated against when purchasing a home or land, whether through overt segregation efforts like redlining or other less explicit but discriminatory practices.

“Even as much de jure discrimination in housing was dismantled by public policy, de facto segregation and the legacy of wealth non-accumulation kept the racial wealth gap from closing,” Jones explained. As a result, white families had a head start of several generations when it came to creating wealth that could be passed down to their children. The most recent data shows that the median white family has almost 10 times as much wealth as the median Black family ($171,000 compared to $17,409).

These disparities are not always easy to solve or address, but Wey says the pop-up prompted him to think critically about traditional ideas of charity.

What the Lunch Experiment Revealed

After offering his white diners the different price options, Wey said the question that most guests ask is, “Where does the additional money that I’m paying go?” That, he said, suggests a bigger problem with money and wealth.

“The act of finding a solution shouldn’t be charity-based or altruistic,” he said. But for white people to conflate giving with altruism, “is mistakenly making your wealth virtuous. The ownership of wealth has been contingent on taking from someone else, and money doesn’t distill virtue on you.” Wealth, he added, is merely a conduit for power, and when we think of it that way we’re able to see why redistribution is important. “You cannot transfer money without transferring the agency that comes with it,” he said.

Wey answers the “where is my money going” question by removing the agency from white people, a group that has historically had it. “I tried to just say the money is not need-based or merit-based, it’s neutral,” he said. “In fact the folks with the agency are the Black folks, because they get to take the money or not.”

There are definitely limitations to this experiment. After looking at the preliminary data collected from the survey, one of the most interesting results is that of 70 or so diners, 76 percent of the Black diners refused to take the $18 that they were offered. “Black people have even tried to pay the $30 and I’m like ‘No, it’s not for you,’” he said.

Through the pre-meal survey, he learned that the majority of his diners have incomes around $65,000, whereas the median household income in New Orleans is around $39,000. So Wey acknowledged that the results may have been different if the pop-up had attracted more of a diverse spread of incomes. “A lot of the Black folks said, ‘I don’t need that money, give it to someone else who needs it.’” 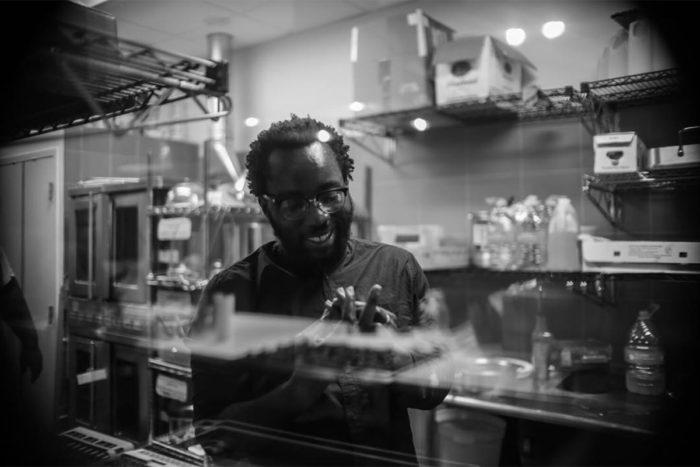 At Saartj, Wey seeks to educate people about the racial wealth gap in America and see how it made them react as they tried to confront a harsh reality. “We’re told that if you work hard you’ll become wealthy—and that’s not true,” he said. Black communities have historically been denied access to tools many white people use to build wealth, and Wey hopes that fact sticks with his diners long after they’ve finished their meal. “We want to provoke further thinking.”

One of the most interesting reactions he’s seen came from a white male diner, a “liberal fellow” as Wey called him, who objected to the entire experiment. “He paid the lower amount and his reason was ideological,” Wey explained. “He thought interpersonal interactions that discuss race and class actually distract from larger discussions and that the issue is best addressed by civic engagement and voting.”

Wey also remembers a pair of white women who visited the lunch counter. After giving his spiel, one of the women said that the experiment was “interesting” and asked follow-up questions, while the other was visibly uncomfortable.

“When we got their survey results, we found that the woman who seemed really uncomfortable was really flat in her responses and only paid the higher amount because her friend did.” For Wey, that’s the point of the experiment. “The value of this outweighs the discomfort.”