The new nonprofit collects surplus food from high-end restaurants and delivers it to missions and soup kitchens in New York City. 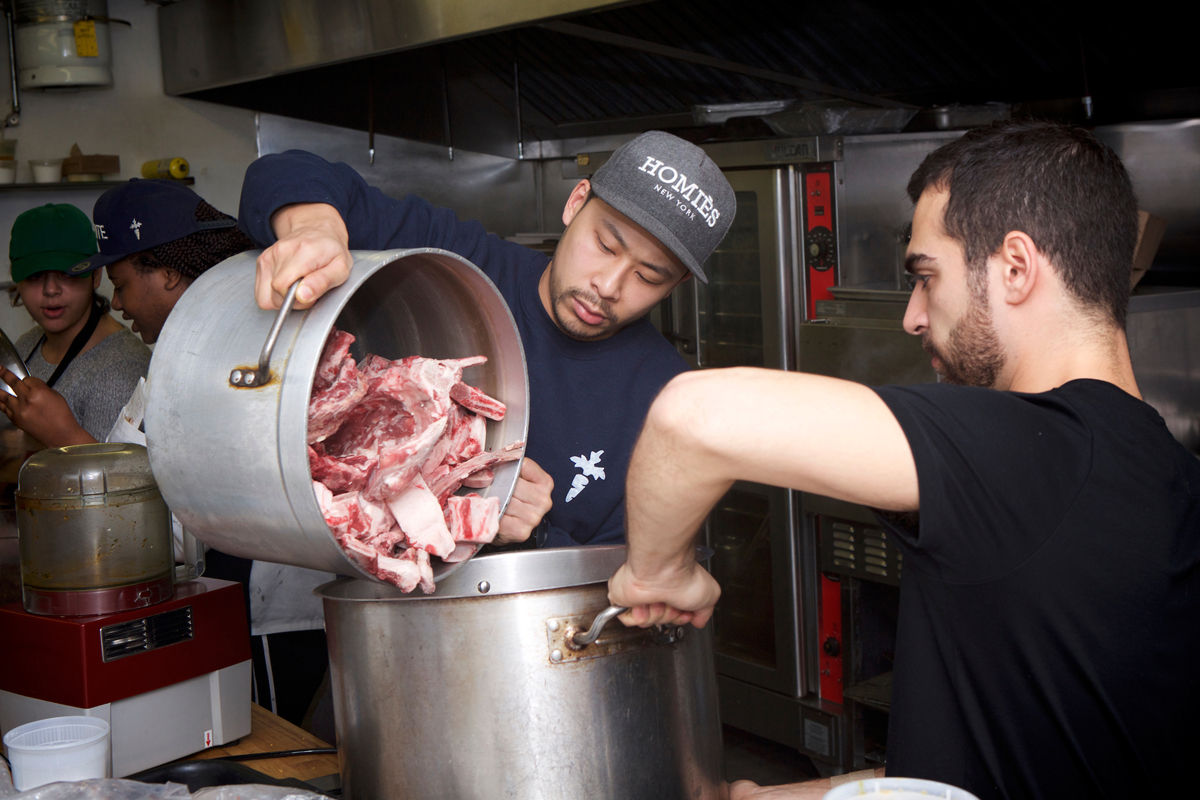 Mountains of fragmented portobello mushrooms are reduced to their essence in an industrial-sized braising pan. A cook strips meat from the carcasses of recently roasted chickens for use in a crowd-pleasing play on chicken and rice.

Situated in one of the anonymous buildings in the labyrinthine Brooklyn Navy Yard, this could easily be a commissary for one of New York’s myriad artisan food purveyors or the headquarters for some high-end corporate catering company. Instead, it’s the temporary home of ReThink Food NYC, a start-up nonprofit committed repurposing excess food into free and low-cost meals to people in need.

Founded by Matt Jozwiak—formerly a station chef at Eleven Madison Park (EMP) and chef curator at the New York Academy of Medicine—the organization officially launched last fall. Its aim is to reconcile two staggering figures: First, that 1.4 million people face hunger in New York City alone and second, that 40 percent of all food produced in America ends up going to waste. 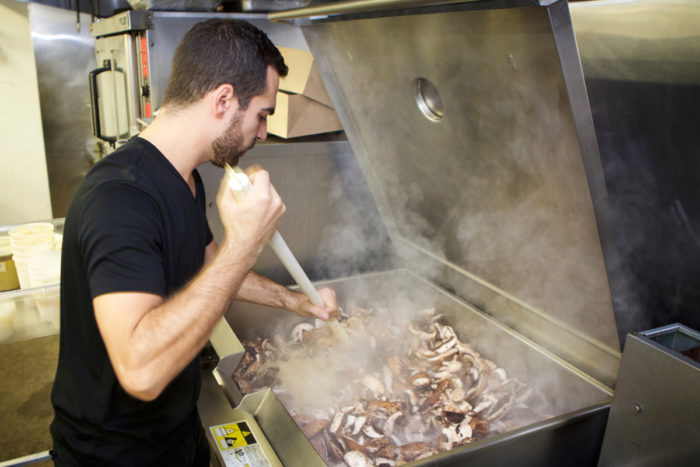 “In the past, a large part of my job has been to help people figure out how to run their kitchens more efficiently,” Jozwiak said. “And when I asked, ‘What’s standing in the way of success?’ The number-one answer has been food waste.”

Though ReThink Food operates partially in concert with the Food Bank for NYC, which works as their primary coordinator for directing meals to area missions, the organization is almost wholly unique from other non-profits within the food redistribution space. While most concentrate on transporting highly perishable items from donation stations to soup kitchens as quickly and directly as possible, ReThink acts as a waystation of sorts.

It employs a small team of chefs—led by Empellon and Lincoln alum Aron Pobereskin—who transform pristine scraps and high-end restaurant leftovers into nutritionally-complete dishes such as the aforementioned chicken and rice, along with sides like stewed cabbage, green salad, and cream of mushroom soup. They’re then packaged, labeled and delivered to wherever the Food Bank determines is most in need on that day—such as the Bowery Mission or the New York City Rescue Mission.

In addition to taking the onus of cooking off of the missions themselves, the system allows ReThink to make better, more calculated use of donations that come in and all but eliminate further, unnecessary food waste on their end.

“A non-profit run by chefs who rescue and cook leftover cuisine is a very new approach,” Jozwiak explained. “Once we bring food into our facility, we have time to make a realistic accounting and output call. Granted it’s a lot of work, but it still gives us this freedom to actually, truly look at what food waste is.” 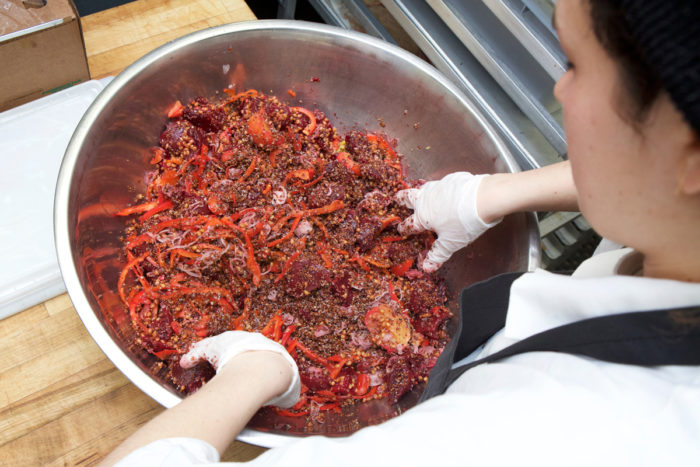 In the kitchen at Rethink Food, which takes food scraps from restaurants and other food businesses and turns them into streamlined meals to feed the hungry. (Photo © Clay Williams)

Counting around 16 volunteers on its board and in its operations, the few everyday expenses in the low-overhead venture include pay for the kitchen staff, a refrigerated truck rental, plastic containers for packaging, and salt. BonBite lends use of its catering kitchen, Fleishers Craft Butchery furnishes bones for making stock and fat for sautéing (ReThink has even rendered foie gras, on occasion), while partner hospitality outfits—currently EMP, Made Nice, The NoMad, Bonbite, Apogee Events, Goa Taco, and Square Roots urban farm—supply almost everything else.

With 1,498 meals served to date, ReThink’s current goal is to deliver 1 million meals in NYC per year, with trucks making drop-offs to missions throughout Manhattan and Brooklyn (they’re also exploring pilot programs in places like Chicago). The founders view this as an entirely obtainable target, considering they’ve tapped into primary sources of excess food—restaurants—that have been traditionally loathe to donate in the past. In fact, they estimate they receive around 30 pounds of waste from each restaurant every day, which translates into about 50-75 servings for the hungry.

“We didn’t have a [food waste] program prior to ReThink,” said Brian Lockwood, executive sous chef at EMP. “We would just do our best to keep ordering tight and use as much of our trim as possible for family meals [made for restaurant staff]. Because of space and time constraints, we didn’t do as good of a job as we’ve now been able to do with the right structure in place.” 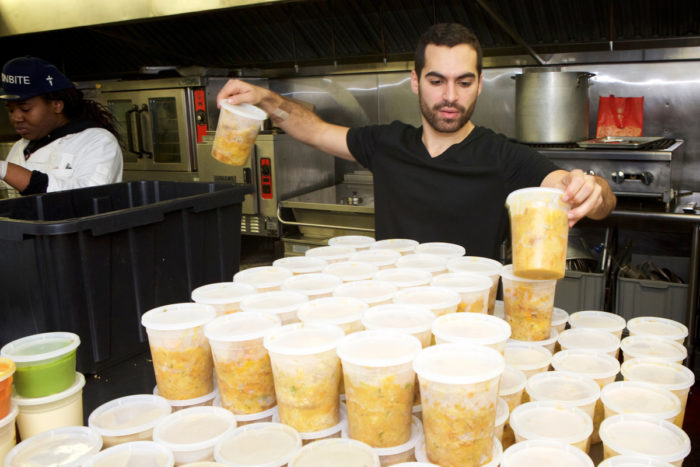 A similar experience at Eleven Madison Park fueled Jozwiak’s desire to launch ReThink. He began reaching out to restaurants and farmers to determine why they weren’t regularly donating food, wrote down all the reasons, and started addressing them one by one.

Overcoming Obstacles One at a Time

Restaurant owners and chefs were concerned that they might be liable if they donated contaminated food, but the lawyers Jozwiak worked with determined was not actually an issue.

“It’s truly a myth,” insisted Jozwiak. “Never in the history of non-profit food redistribution has anyone been charged for someone getting sick.” But since that fear has historically been enough to stop potential donors in their tracks, ReThink has developed an indemnification agreement that absorbs donors of 100 percent of the liability the second they hand over the food—even if someone slips on a banana peel on their way out the door.

The second challenge was logistics, because restaurants are often hard-pressed to commit their own staff to transporting goods. ReThink provides a refrigerated truck along with drivers at ever step of the process.

A third stumbling block was the cost of containers to hold the extra food, which generally run restaurants between 50 cents and $1 each. ReThink found an easy enough fix by purchasing replacement tubs to leave with the restaurants; by taking participants’ old plastic tubs and boxes full of donated food, and leaving brand new empties in their place, they save restaurants the cost of replacing those tubs.

“ReThink also comes daily, which helps alleviate the space issue of holding onto leftover food,” Lockwood added. “They’re in and out of the kitchen within 10 minutes.”

And as an added incentive, the organization rewards its partners through sizable tax deductions. For their initial two-week pilot program, Jozwiak estimates they’ll hand participating establishments a $15,000 break each, a huge chunk off of the owner’s taxable income.

Jozwiak hopes the extra money his organization can funnel toward restaurants—both in terms of tax breaks, and relieving their need to pay for waste removal—increases their profitability and sustainability. Ideally, he’d also love to see some of those potential profits directed toward raising back-of-house wages, which would serve to create an even better food system.

Granted, ReThink has little to no actual say in how owners elect to use their savings. Still, it’s already had a positive, direct impact on the chefs involved. “I love working at the three-Michelin-star level, but all the waste is so disheartening,” Lockwood said. “Finding a way to give back has been incredible.”

“There is a real danger that the focus on food waste will become a distraction from the systemic change needed to truly end hunger in the U.S.,” Cohen said.

Andy Fisher, a long-time food-security advocate and the author of Big Hunger, echoed the point. “My cynical response [to food-rescue programs] is, that’s nice,” he said. “I’m sure it makes the chefs feel good, it gives some people a nice humanitarian meal.”

But truly eliminating hunger, Fisher added, will require a larger lens. “[Food rescue] plays an important role, but I think the question is, where do we put our resources and attention? Let’s also put an equal amount of resources and attention to upstream causes,” such as raising the minimum wage and providing affordable housing.

Perhaps the thing that furthest sets ReThink apart is the quality of the ingredients they’re able to secure and distribute.

Take the indoor urban farming initiative, Square Roots, whose crates of wholly unblemished kale and clamshells of basil would be eagerly snapped up at any area farmers’ market, and of course, the aforementioned trio of Daniel Humm/Will Guidara ventures, where exacting internal standards and an emphasis on perfect plating means that everything but the most pristine portion of a mushroom goes otherwise unused.

It also means the ReThink menu tends to be every bit as local and seasonal as high-end restaurants. “Examples of current donations include celery root, bread, cooked potatoes, leftover sauces and purées, lettuce and squash cake,” Lockwood said, “and this is just the tip of the iceberg.” 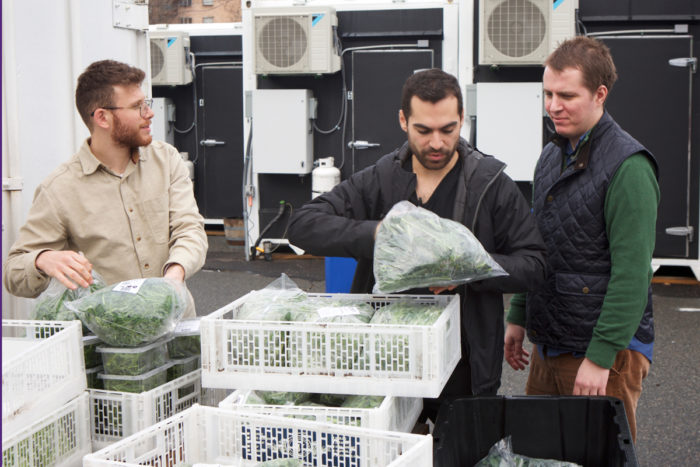 Jozwiak was shocked to discover that the best donations came from the fast-casual restaurant Made Nice. “They need to prep enough food for the possibility of doing up to 800 covers a night,” Jozwiak added. On a given night, for example, Made Nice might supply 30 quarts of diced and cooked squash covered in maple squash puree that’s ready to package and distribute.

When restaurants provide food in such near-ready condition, Jozwiak said, “It cuts down on additional potential waste, cost, and labor. That is a big difference between us and everyone else; it’s like we’re catering for all of New York.”

To be sure, ReThink regards its recipients as diners at a restaurant. Not only are they committed to serving them the best, most nutritionally balanced meals possible, but they also actively seek feedback. 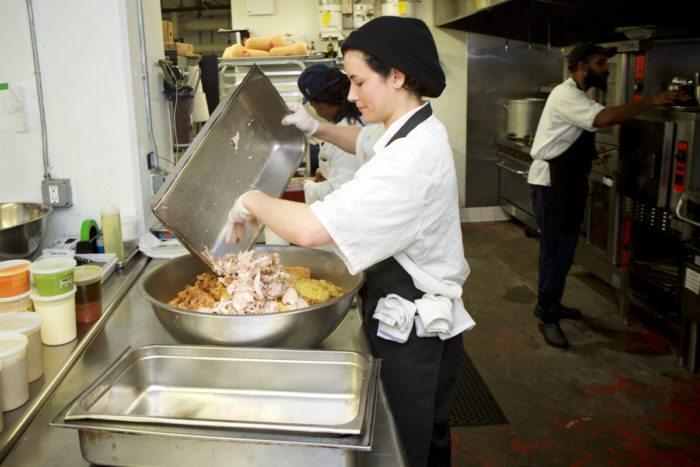 Continuing to Develop the Model

With a lot of the kinks figured out, Jozwiak insists the only real hurdle has been raising money. An original $50,000 came from the J. Baker Foundation, and they have an additional $60,000 on hand from fundraising, soon to be supplemented by a May 14th soirée, on the rooftop of The NoMad. 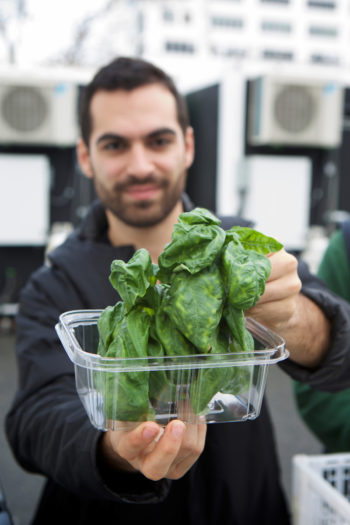 The ability to significantly expand will allow ReThink to take full advantage of the rapidly burgeoning interest from restaurants, including serious hospitality heavyweights like the Major Food Group and the Dinex Group, along with Citadel, the global financial institution that could potentially provide more donated food than all of ReThink’s current partners combined.

Another challenge is to find ways to effectively work with other organizations within the redistribution space. For example, ReThink is careful to divide their planned pick-up map with similarly focused non-profits like Rescuing Leftover Cuisine, which recruits volunteers to transport excess food to shelters nearby. There’s also a good chance they’ll end up making use of food from other New York hunger organizations like the Food Bank and City Harvest.

Once they get their system down to a science, Jozwiak hopes to begin hiring people in the communities the organization serves, and teach them to cook for themselves. But for now, he’s focused on first creating a better food redistribution system. “In short,” he said, “this is a really simple solution to a lot of big problems.”

Sarah Zorn is the food editor of Brooklyn magazine and the author of Brooklyn Chef’s Table: Extraordinary Recipes from Coney Island to Brooklyn Heights. Read more >