Are Black Walnuts Ready to Boom?

A nuisance to many, this native Appalachian nut is showing some diligent foragers that money can grow on trees. 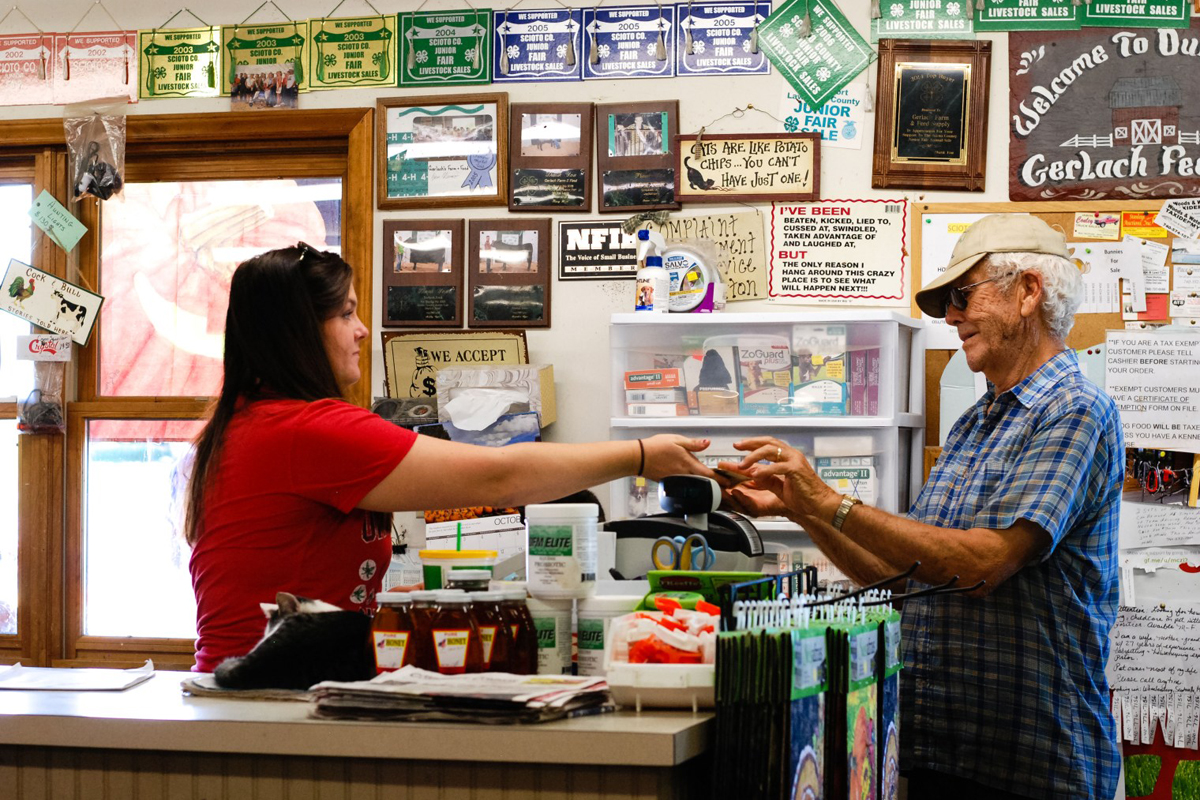 The first car arrives over two hours before the hulling station officially opens in Jeffersonville, Kentucky. By the time that Renee Zaharie appears and starts the hulling machine, four more vehicles have pulled in and are waiting under the darkening evening sky.

The steady murmur of conversation (and the occasional guffaw) hums beneath the tent protecting the machine from the elements, as walnut hullers shoot the breeze after a long day of picking. Occasionally, a plaintive mew announces the otherwise-silent arrival of one of the 40 cats that Renee and her husband, William, foster. Out front, cars zip by on the busy county road. All around, the soft chirps of crickets sing their nightly chorus.

It’s the first weekend of the annual black walnut harvest that takes place each October, and the air is festive.

Money That Grows on Trees

Black walnuts are native to North America (including six Appalachia states) and, unlike many other tree nuts, grow in the wild. The green, tennis ball-sized nuts rain onto fields, roads, vehicles and sometimes, people, presenting a nuisance to cars parked beneath them and a danger to lawn mowers everywhere. 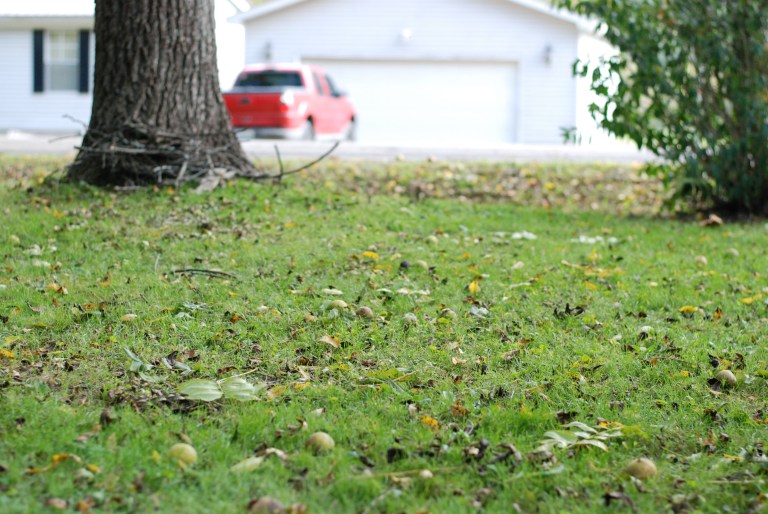 During black walnut season in October, the tree nuts rain down everywhere. For homeowners, they present a nuisance that can damage lawn mowers. Mike Foight of South Shore, Ky. enlists his grandchildren to clear his yard (pictured here) and earn some spending money.

While some may dread black walnuts for these reasons, for many others, the annual harvest is a welcome time of the year: a sign of the changing seasons, the return of a beloved baking ingredient, and, perhaps most importantly, an opportunity to earn extra cash.

Black walnut harvesters gather the nuts locally—from their yards, nearby yards, roadsides and forests—and bring them to one of 238 hulling stations in 14 states across the country. There, hulling operators use specialized machinery to remove the hulls (which can make up to half of a black walnut’s weight), weigh the hulled walnuts, purchase them, and send them to Stockton, Missouri for shelling and further processing. Stockton, the unofficial black walnut capital of the world, is home to Hammons Product Company (HPC), a family-owned business that has been shelling black walnuts for the past 71 years. The company sets the price for black walnuts every year. This past October, they paid $0.15 per pound to walnut pickers, and an additional $0.05 per pound to hulling stations.

Brian Hammons, the company’s president, says that they produce an average of 23 million pounds annually and are expecting a bumper crop in Appalachia this year that will push that figure upwards of 30 million. After shelling the nuts, HPC sells them raw in grocery stores and specialty retailers, as well as directly to chefs and ice cream makers (black walnut ice cream is wildly popular in certain parts of the country). There’s also an ever-increasing selection of black walnut products, like black walnut oil, and even myriad uses for the shells, which can serve as eco-friendly ingredients in sand-blasting agents, water filtration systems and even sports fields. Every part of the nut is able to be used. 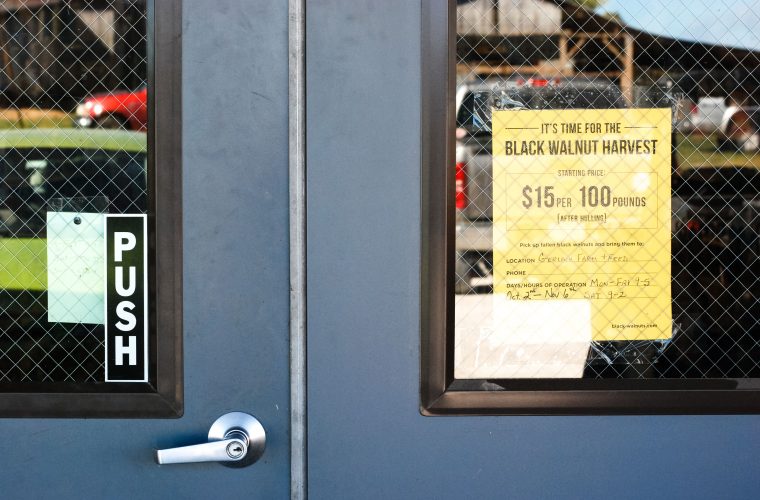 The front door of Gerlach Farm and Feed in Wheelersburg, Ohio advertises the start of the black walnut season. Hulling stations earn a commission of $0.05 per pound of black walnuts hulled, providing a good incentive for them to get the word out in their local communities.

Black walnut harvesting is also a unique business because it’s low-risk for the hulling operator, say Christina Gerlach-Armstrong and her husband, Darryl Armstrong, who run Gerlach Farm and Feed, the only remaining family-owned feed store in Scioto County, Ohio. In October, their store also hulls black walnuts. In good years like this one, as much as 25 percent of their business activity will be dedicated to the hulling.

A few years ago, Darryl and Christina recalled that Hammons connected them to West Virginia’s Department of Natural Resources, whose forestry division used the nuts as squirrel feed.

Portraits of the Black Walnut ‘Village’

In addition to the financial benefits of the harvest, Gerlach-Armstrong also finds it meaningful to be part of a process that takes “a village of people from many states.”

That village includes a variety of motivations, as well. There are harvesters like Annabelle Richie, who returned to walnut picking after a long hiatus to make money for her husband’s Christmas present. Some simply enjoy spending time outdoors, like retiree Paul Riggle, and others want to teach the next generation the value of hard work, like Mike Foight, who takes all of his grandkids out walnut picking. Full-time walnut harvesters like Penny Hednell spend September picking pawpaws, October culling black walnuts and, in the spring, wild ramps that are also native to many parts of Appalachia.

Then, there are those who simply need to clear their yards.

For many of the hullers, interacting with these community members is part of the appeal. Such is the case for Chris Chmiel, the owner of Integration Acres and a county commissioner in Athens County.

“I like providing this service to people,” he says, even though his main passion is not black walnuts, but Ohio’s native fruit, the pawpaw. He organizes the annual Ohio Pawpaw Festival, and found his way to the black walnut business because of the overlap between the two. In addition to both being native fruits, a lot of Chmiel’s pawpaw foragers also collect walnuts. Pawpaws, it turns out, grow well beneath walnut trees.

“It becomes part of who you are in a way,” he says of black walnuts. “It’s [one of] your seasonal traditions and rituals.”

Reconnecting to the Earth and a Simpler Way of Life

For the Zaharies, who run the hulling station from their modest five-acre property, black walnuts are the only source of income for both themselves and the animal rescue that they run on site. 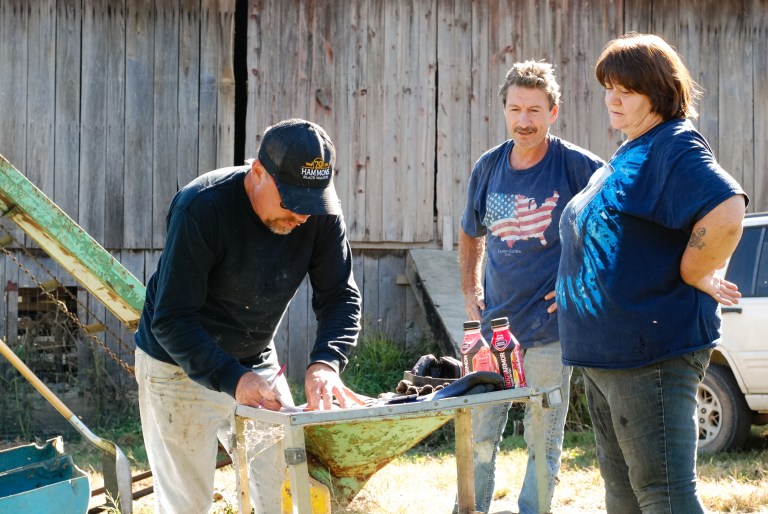 Chris Chmiel of Integration Acres writes out a check to Penny and Larry, his first two customers of the season. Penny and Larry are retired, and spend all of October picking black walnuts from around the county.

The couple started out as walnut pickers themselves, but the nearest hulling station was more than an hour’s drive away. When they bought their property, they decided to begin hulling at home. In the 11 years since starting, their hulling operation has become the most productive in all of Kentucky, and many neighboring states as well.

The Zaharies live simply. They own their property (lowering their overhead costs), drive older cars, and eat a vegan diet. “We like to do things in a natural way,” Renee notes. “This is a nice way to be able to make ends meet and give back to the earth.”

While the duo’s dependence on hulling as their income is not the norm among hullers, they are not alone in their desire to challenge the dominant economic and food systems.

“Native plants are a more efficient and more cost-effective agricultural crop,” Chmiel says. “In these hills of Appalachia, we’re not going to grow soybean and corn. Diversity is part of the resiliency of Appalachia.”

John Stock of United Plant Savers—an organization dedicated to protecting native medicinal plants—agrees with Chmiel’s assessment. “The real value is the intact forest and the diversity. In these communities, that’s what we’re trying to instill.” But he recognizes that money talks. “We are trying to find ways to demonstrate that [the value of native plants] in a monetary way, even though the bigger value is beyond money. We can’t exist without these ecosystems.”

The Future of Black Walnuts

According to the U.S. Department of Agriculture, $7 billion worth of tree nuts are grown in the United States annually. But unlike black walnuts, most tree nuts are grown and harvested in large-scale, monocultural orchards concentrated in California. Orchards mean a much more stable supply of crops, and the improved varieties typically grown also improve nut yield and profitability. However, orchards are more resource-intensive, and their lack of genetic diversity makes them less resilient against disease.

Brian Hammons believes that black walnuts have the potential to become a much bigger industry—his annual net sales are in the range of $12-14 million. Black walnuts also meet many of the current demands in the food industry, which is placing greater value on native and foraged products, as well as sustainability and health. 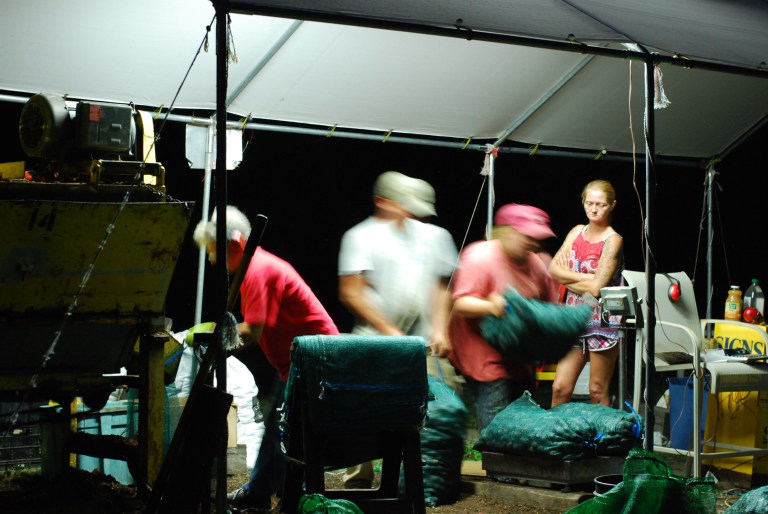 The first customer of the night watches as her walnuts are weighed in Jeffersonville, Ky. This year’s price is $0.15 per pound of black walnut.

But getting there is a problem of supply, not demand. Because the vast majority of black walnuts are foraged, and naturally-occurring black walnuts produce low yields of nut meat, the company has partnered with various agricultural extension programs to develop a faster growing variety that produces more walnut meat. Today, a small number of black walnut orchards are already producing grown, rather than foraged, nuts. (Still, these represent less than 1 percent of the annual harvest.) Hammons does not believe that orchard-grown black walnuts will negatively impact the wild black walnut harvest. If anything, he says, the increased market will benefit everyone.

And, with the number of nuts that lie unpicked every year, he may be right.

This article originally appeared in 100 Days in Appalachia and is reprinted with permission. All photos by Eileen Guo.

Top photo of Gerlach Farm and Feed in Wheelersburg, Ohio, where Paul Riggle receives cash for his load of black walnuts. This year, Hammons Product Company is offering $0.15 per pound, the highest price that they’ve ever paid.