Celebrities on a Food Mission

Actress Zooey Deschanel and others are getting involved in food, but are they helping to move the good food movement forward? 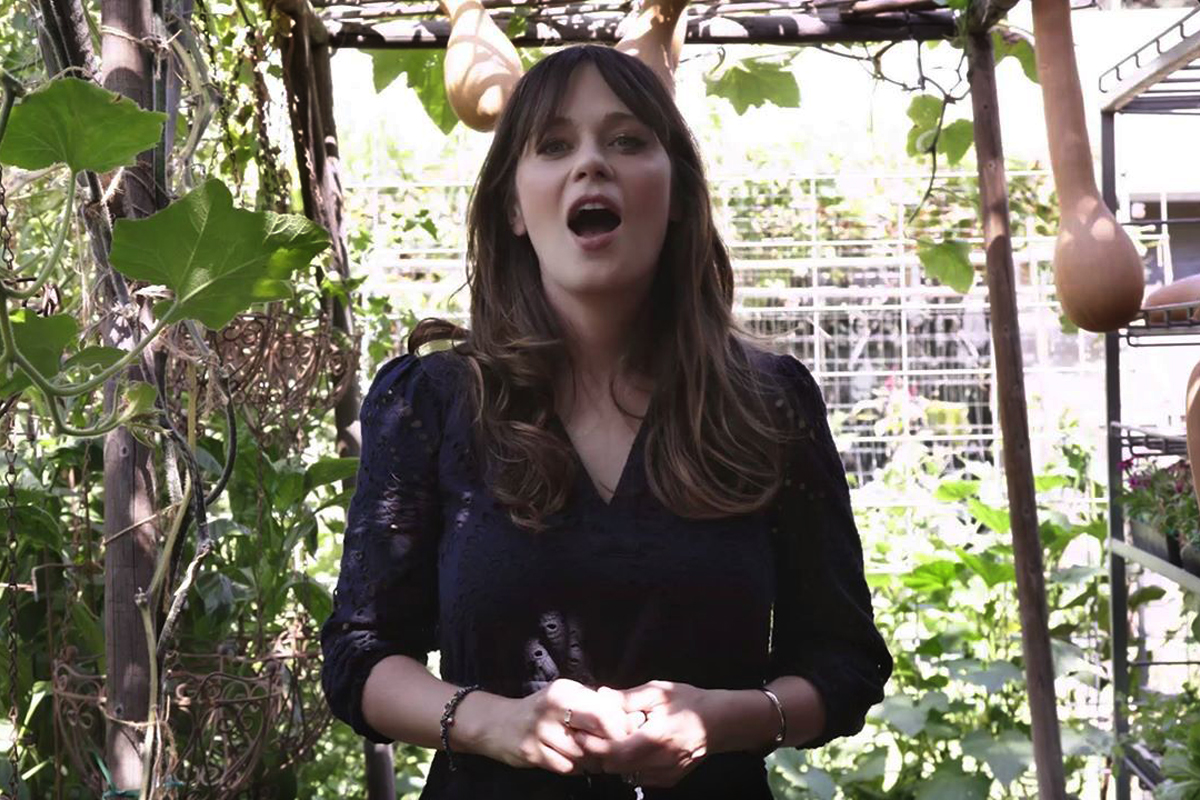 “It’s gotten to the point where she insists on it. She’ll run outside and pick it,” Pechenik said, referring to the vertical gardens the family has outside their home. The Hollywood producer—and husband to actress Deschanel—hopes to bring similar set-ups to more people’s homes through Lettuce Grow. The vertical farming towers will officially hit the market this spring; they’re one part of The Farm Project, the celebrity couple’s new initiative to reconnect people with their food.

“When you have the opportunity to reconnect with nature, you learn that there’s a joy in growing your own food and in connecting to such a natural process,” Deschanel told Civil Eats. “It’s an inherent part of being human, and it’s enriching in so many ways—spiritually and emotionally.” 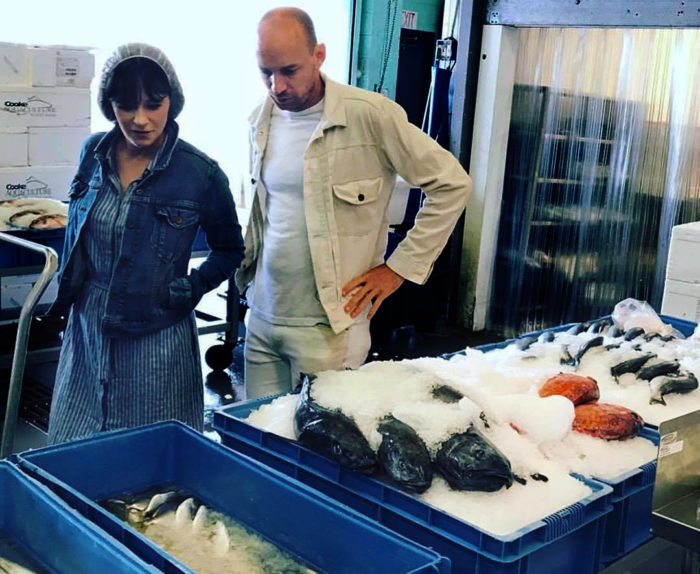 Deschanel and Pechenik are just the latest Hollywood celebrities to rally behind the food movement in the last decade.

After actress Natalie Portman read Jonathan Safran Foer’s Eating Animals, she reportedly contacted Foer about turning it into a documentary. The resulting film, ”Eating Animals,” was narrated by Portman and debuted at Telluride Film Festival in Colorado in 2017. Sundance Selects, which picked up the rights to the film, is planning to release the documentary sometime in 2018.

Drew Barrymore, appointed as an Ambassador Against Hunger by the U.N. World Food Programme (WFP) in 2007, has worked on several WFP operations in Kenya. Jake Gyllenhaal has been involved with The Edible Schoolyard Project, saying, “When kids get their hands dirty in the garden or experiment in the kitchen, they have fun, but more important, they learn about how to care for themselves and each other.”

In the social media age, a celebrity’s support can offer a significant boost in an instant. After Hurricane Maria, Hamilton creator Lin-Manuel Miranda—who also recently donated $5,000 to close out a fundraiser for an app to alert farmworkers of dangerous temperatures—helped amplify New York food writer Alicia Kennedy’s fundraiser for Puerto Rico’s food service workers, helping get the event off the ground. Called Eat It, Maria, the event raised more than $10,000 last September for Serve PR, an organization that raises money to support and rebuild the service industry.

“Without [Miranda], we wouldn’t have found a venue—or maybe we would have, but it never would have come together so quickly and easily,” said Kennedy. His sharing of the information also led The Brooklyn Kitchen to offer up space, free of charge.

In some ways, celebrities and food issues are a natural combination. After all, part of any Hollywood actor’s job is to look good, and eating healthy food obviously plays a role in that. And some celebrities see getting involved in the social, political, and environmental aspects of food as a natural next step.

“Twenty, 30 years ago you had celebrities starting to talk about juice, eating healthy, and food transparency,” said Charles Platkin, executive director of the Hunter College New York City Food Policy Center. “It’s a natural progression that year over year and generation over generation, celebrities are still focused on food. But they’re starting to go deeper, which we’re seeing with things like The Farm Project.”

In addition to investing in products such as Lettuce Grow, Deschanel and Pechenik are investing in food organizations including an urban farm in Austin. They also started an online video series on Facebook called Your Food’s Roots. The five-episode series covers a range of challenges within the food system, including overfishing, food miles, and pesticide use, and are designed to educate and empower people to engage more deeply with their food.

“Our goal is to educate the viewer, and present them with a few solutions so they can find at least one that resonates with them when they’re eating or shopping,” Deschanel said. “The choices they make don’t need to be complex or completely alter the way they live—they’re deliberately chosen to be accessible to everyone.” 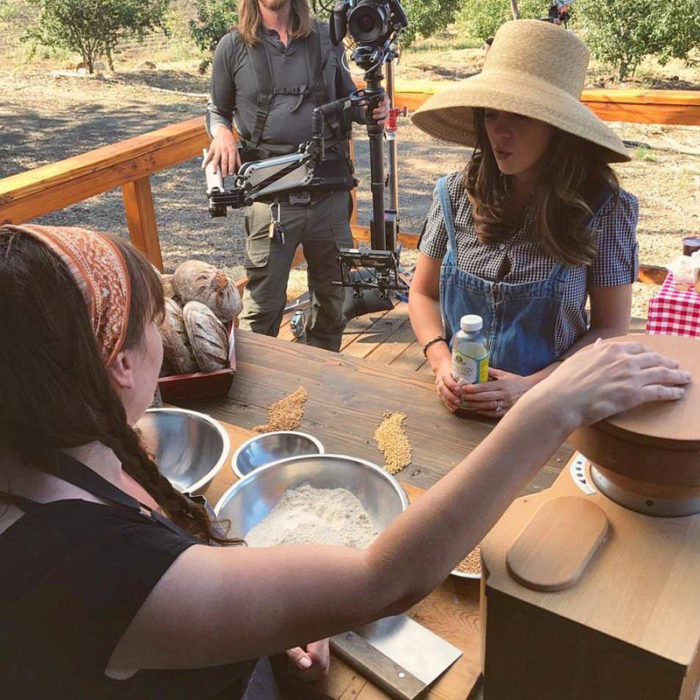 The star of the sitcom “The New Girl,” Deschanel has a sizable, built-in audience of Millennials—a group whose buying power has already played a significant role in reshaping the food system. And while the five episodes of “Your Food’s Roots” have nearly 17 million views on Facebook, the couple has also faced some criticism over the scientific accuracy of the videos.

Platkin of the Hunter College NYC Food Policy Center says the fact that they are engaging people’s curiosity and providing an entry point—even if they don’t get everything right—makes Deschanel and Pechenik’s efforts valuable. “Sometimes, as someone who speaks to a lot of journalists, they get it completely wrong,” he said. “[But I tell myself,] ‘Calm down, they got the gist of it.’”

And yet, inaccuracy can be a slippery slope. “Raising awareness” without a solid grasp of the facts can often open people up to harsh criticism, especially from those with competing agendas. And with issues of elitism still hamstringing the food movement, celebrities who can afford to spend the money and time to achieve good-food nirvana may have to work harder to ensure that their message will be taken seriously by the mainstream public.

Celebrities also tend to gravitate toward the trendiest aspects of the food movement, while many other critical issues often remain unaddressed. (That’s why it was refreshing to see food worker advocate and Restaurant Opportunity Center co-founder Saru Jayaraman join actress Amy Pohler on the red carpet at last month’s Golden Globes.)

It’s one thing to focus on farm-to-table restaurants, Platkin adds, but, “there are a lot of issues—the farm bill, SNAP funding, WIC—that celebrities seem not as willing to attach their name and fame to.” Still, he said, everyone should be welcome to engage with the movement. “You never know who is going to have an idea that could change the whole system.”

Photos courtesy of The Farm Project.