Returning Stolen Land to Native Tribes, One Lot at a Time | Civil Eats

Returning Stolen Land to Native Tribes, One Lot at a Time

A quarter-acre of land in Oakland, California is about to return to Native hands, bringing a sense of place and healing to the Ohlone people. 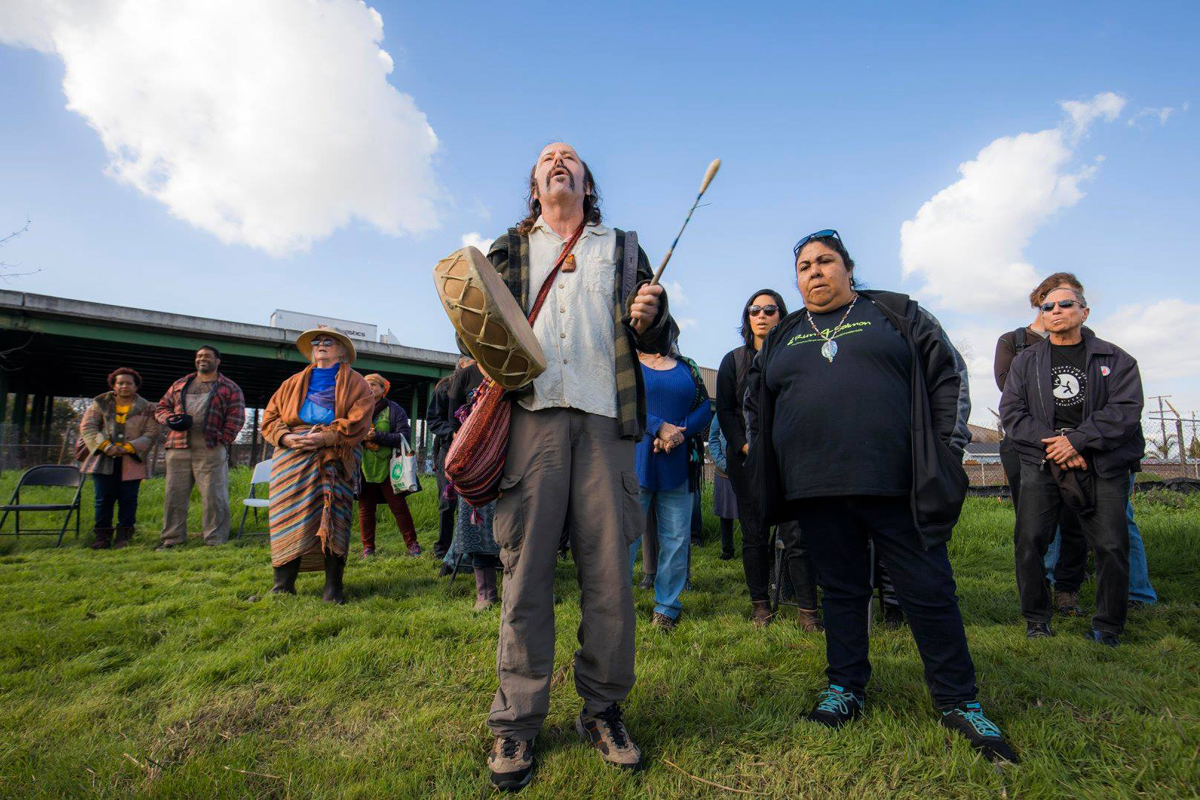 It’s the winter solstice, but the sun is shining in East Oakland, California. Within view of the freeway, amidst a gritty stretch of neighborhood with more concrete than trees, Rolling River Nursery and urban farm stands out. The two-acre lot, run by nonprofit Planting Justice, is filled with about 30,000 fruit trees and is staffed by former inmates and other area residents with few employment options.

On this day the green space is especially tranquil. A group of young men are holding a drum circle. Near the entrance, workers and volunteers are sitting around crates of avocados, removing the pits to plant. Soon, a quarter-acre of this lot will belong to the the Sogorea Tè Land Trust. The land, said Planting Justice in a recent announcement, will be an “indigenous cultural site with a traditional arbor, a place for ceremony, and a place to remain true to the original teachings and pass them onto the next generations.” 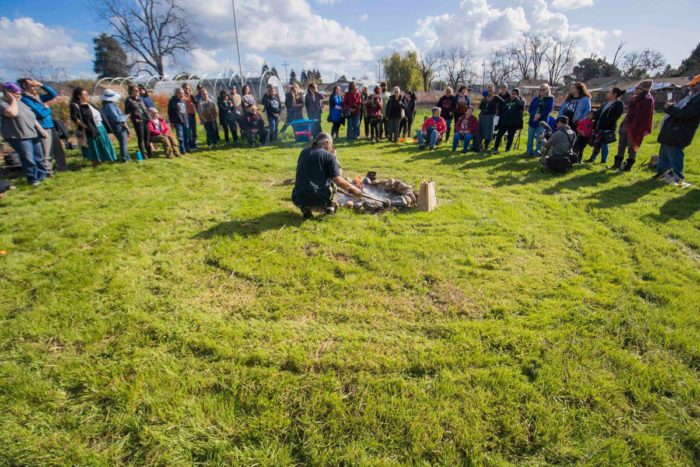 The effort is the product of a partnership between Planting Justice and the Sogorea Tè Land Trust—an urban, women-led effort that’s rare in a landscape of mostly rural, male-organized efforts—to facilitate the return of Ohlone land back to Native stewardship.

For thousands of years, the Ohlone people lived in the area between the San Francisco Bay and the Monterey Bay. When the Spanish missionaries arrived in the 1700s, they brought smallpox and other deadly diseases with them and enslaved and murdered Native communities. By the early 1880s, the northern Ohlone were reduced to around 1,000 people. Dozens of tribes in the state, including the Ohlone, were never federally recognized, so they were powerless to stop their sacred sites from being paved over.

A lot of the hardship in today’s Native communities is tied to their lack of land, say Corrina Gould and Johnella LaRose, founders of the Sogorea Tè Land Trust, which was started in 2012, specifically as a way to return Ohlone land. LaRose is a member of the Shoshone-Bannock tribes, and Gould is Chochenyo and Karkin Ohlone.

Over 330,000 Native American people live in the state today, and many suffer from heart disease, diabetes and other diet-related illnesses. According to a recent public health survey on Native children and their families in Alameda, “Native Americans face a myriad of maladies and unhealthy behaviors known as Historical Trauma Response.” For this reason and others, Native people need a place to express cultural pride as one antidote to intergenerational trauma.

“It’s important for all human beings to have a connection to the land,” says Gould, who has seen shellmounds sacred to the Ohlone covered by apartment buildings, bars, malls, and parking lots. With this in mind, she and LaRose are “working on creating places of healing and a space that young people can be on, so they’re not covered in concrete all the time.”

When asked how she and Gould came up with the ambitious plan to buy back tribal land, LaRose laughed. “Oh, you know,” she said. “You fall asleep and you do some dreaming.” 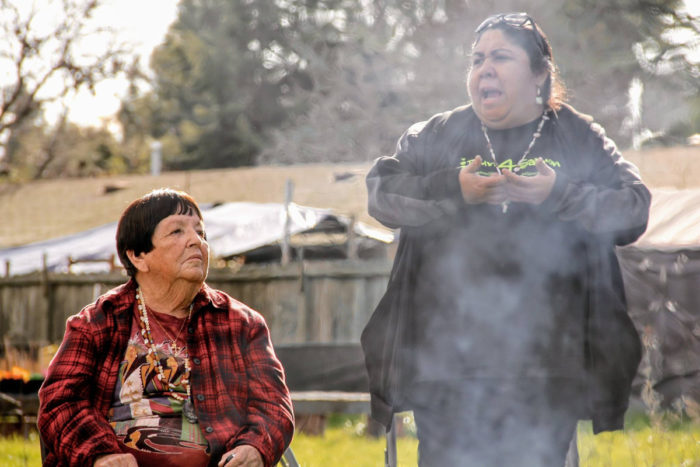 But she and Gould are doing more than dreaming. As the co-founders of Indian People Organizing for Change, they joined organizer Norman “Wounded Knee” DeOcampo, another organizer for indigenous tribes, to protect a sacred burial site in Vallejo just northeast of Oakland in 2011. They occupied the land there for more than three months, ending with a cultural easement between the City of Vallejo, the Greater Vallejo Recreation District, and two federally recognized tribes.

This struggle inspired LaRose and Gould to start thinking about what they might do to regain sacred Ohlone sites. Gould was invited to southern California to an indigenous land trust meeting and out of that came Sogorea Tè Land Trust.

Soon, LaRose and Gould set to find ways to either buy back traditional Ohlone land and to create cultural easements on their sacred sites. After they created the land trust, they started hosting gatherings for people to talk about land. In 2014, they held three gatherings—one for indigenous people, one for all people of color, and one for everyone.

“We asked ‘What does land mean to you? What is sacred? What happens when you grow up without land?’” said LaRose. “People made art and wrote poems, and we talked about how you can benefit from land that’s open, where you can breathe and relax.”

With a creek that Gould’s ancestors knew as Lisjan running nearby, the Planting Justice lot fits the bill. “It’s quite beautiful even though we’re surrounded by the city,” she said.

Gavin Raders, co-founder of Planting Justice, says once the land is paid off (he thinks it will take about five years), the organization plans to donate the full two-acre lot to the land trust, so that Ohlone and others in the Native American community can grow food there. Meanwhile, the quarter acre will be for ceremonial practices and should belong to the land trust in about six months.

“There’s been a disconnection from land and sacred practices with the genocide of indigenous people,” said Raders. “It’s our duty to see that the land stays in Native stewardship forever.” 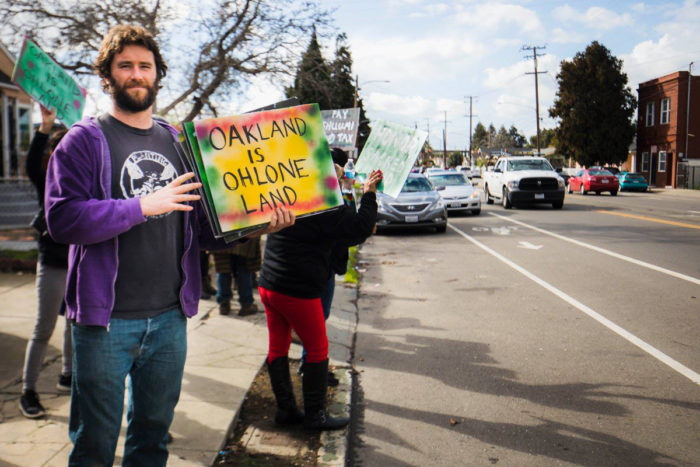 Chris Tittle, director of organizational resilience at the Sustainable Economies Law Center in Oakland, also sees Native land ownership as an ethical issue. “There’s this narrative that Native people are gone, but they’re still here and organizing,” said Tittle. “Even symbolic acts—and this is more than symbolic—to acknowledge and to take steps to heal and repair what was done to them is a massive act of reparations.”

Diane Williams, health educator for Planting Justice, and a longtime friend of Gould and Larosa, says the time she has spent time working with former inmates who are re-entering the general population and organizing drum circles at the urban farm has strengthened her belief that indigenous people need their own land.

“The drum is the heartbeat of our community, and as Native people we’re really clear on that,” says Williams, who is a Native Alaskan. But finding a place to host drum circles hasn’t been easy. “We have to go sit in someone’s church or we have to go sit at a park,” she said. Having a dedicated space will make a big difference when it comes to healing the community. 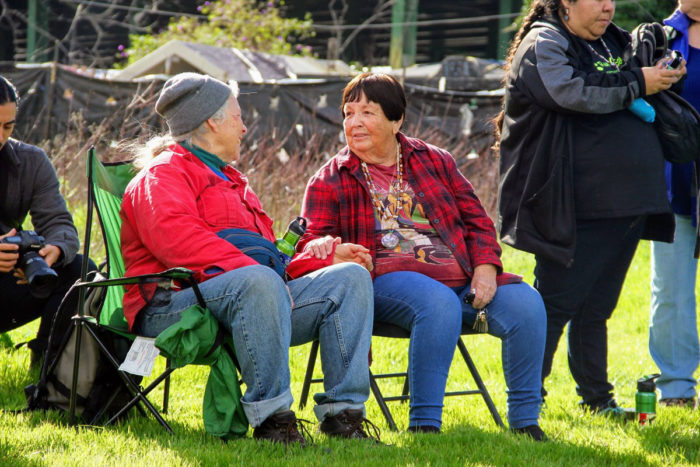 Gould and LaRose have been focused on finding the land, but they hope that young Native Americans will help shape the space. Gould also has one thing she’d like to see. “One of the only dreams I have is to create a roundhouse that’s on our territory again,” she said.

Roundhouses were once common meeting paces for tribes all over California. “That would be a place for our spiritual wellness,” Gould said. “It would reengage our young people in their songs and dances, land, and be healing not just for Ohlone people but for everybody who now lives in our territory.”

All photos by He-Myong Wu.