Researchers at the University of Vermont have established a pilot program to see if Northeast farmers can grow the valuable spice. 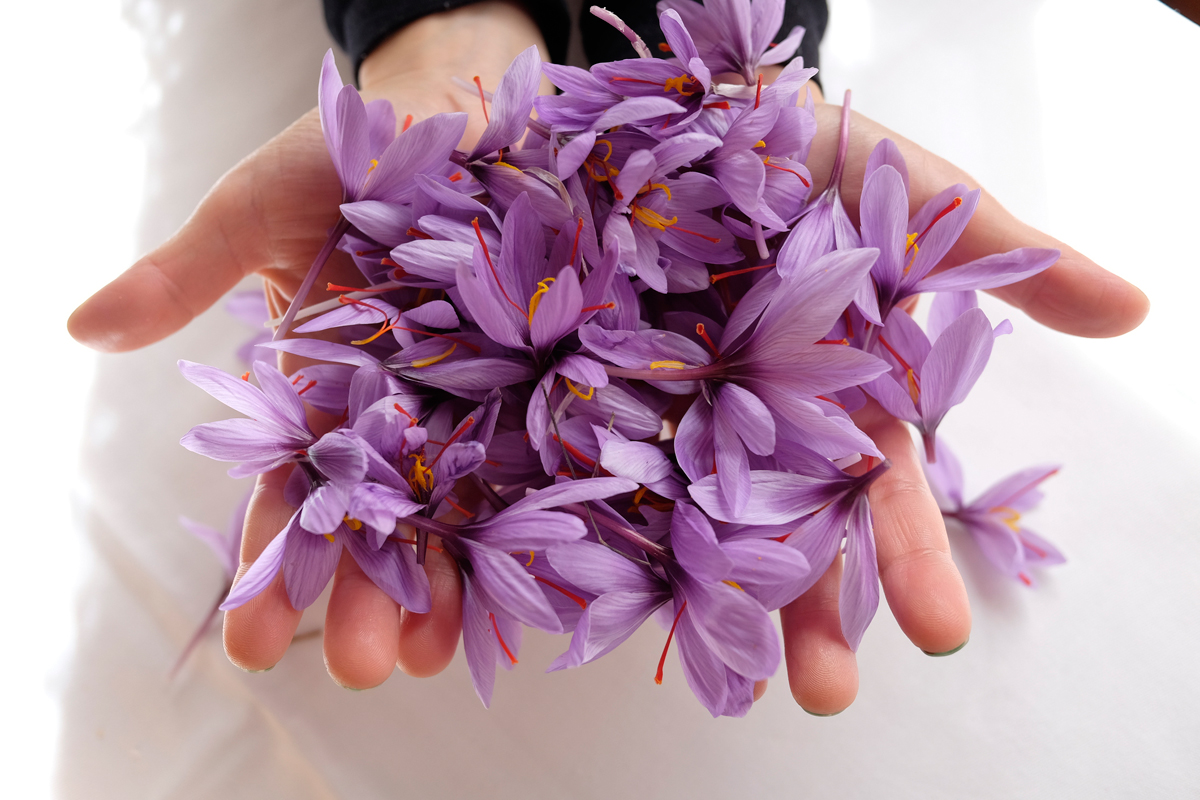 Next month, a group of eager farmers will be attending the second annual saffron-growing workshop held at the University of Vermont in Burlington. The goal? Getting the inside scoop on cultivating this storied spice.

The day will include seminars on growing techniques, dealing with pests, and drying and storing—the detailed intel these saffron enthusiasts need to produce a good crop. One of those farmers is Sarah Salatino, owner of Full Circle Gardens in Essex Junction, Vermont. On a sunny day last fall, Full Circle Gardens’ outside raised beds boasted a post-season pop of purple—the petals of the saffron crocus, Salatino’s first crop. Her plants are part of an experiment to discover the best system for producing saffron in New England.

She harvests the plants by pinching the flower off its stem, separates the petals, and then uses a pair of tweezers to separate the yellow stamens from the red-orange stigmas from which the spice originates. Once she lays each part on a paper towel in a tray, she will leave them to dry for a day or two. Figuring out saffron, she said, has come with a steep learning curve.

She sees it as an opportunity to grow something unusual. “People are developing niche [products] like crazy,” she said.

Salatino will send her results to the University of Vermont, home of the North American Center for Saffron Research and Development, which was established in 2015 and hosted its first saffron workshop in March 2017. The goal is to discover the best cultivation method that results in a good crop of high-quality saffron.

The results from this year’s experimental crop hints at the potential for domestically grown U.S. saffron. As a niche, “shoulder-season” crop that can be grown after the fall harvest, and with a high resale value—saffron fetches as much as $29,000 per kilogram (roughly $13,000 per pound)—it could be a boon for small farmers looking for another source of revenue. But all that would require the establishment of a market for premium, locally grown saffron.

From Iran to Vermont

Saffron is a legendary spice that can be traced back to at least ancient Minoan-era Crete (2600BCE to 1100BCE). Some research predicts the global saffron industry will be worth $2 billion by 2025. About 90 percent of the world’s saffron—including most of the 20 tons imported to the U.S. each year—comes from Iran; Spain and Italy are other significant producers.

Its most familiar usage is as a culinary spice; its distinctive aroma, flavor, and bright yellow color are often used in recipes for Spanish paella and Italian risotto and it’s also a classic ingredient in the French fish soup, Bouillabaisse. And saffron is also used as a fabric dye and is reputed to have nutritional and medicinal benefits for ailments including heart disease and depression. But it’s probably best known for its prices: as much as $29,000 per kilogram. Hence its nickname, “red gold.”

Although there’s a history of saffron-growing in the U.S.—the Pennsylvania Dutch have grown it since the 17th century— the practice is not as widespread in this country as it once was.

To bring it back, Arash Ghalehgolabbehbahani, a post-doctoral researcher at the University of Vermont, decided to launch an experimental saffron project. Originally from Iran, Ghalehgolabbehbahani worked in the saffron industry in his home country, and thought saffron could do well in Vermont, given the similarity of its climate to Iran.

At the University of Vermont lab, researchers are growing saffron in outdoor raised beds and in milk crates in a small hoop house. The milk crates are deep enough for the plant’s root system to develop, and also portable, so that farmers can store the crates out of the way once the brief growing season is finished.

University researchers plant saffron corms in late summer or early fall, which take about a month to flower and are ready for harvest in about six weeks. The plants are relatively pest- and disease-free, although voles love the corms. (Researchers found that lining the bottom of the beds with hardware cloth helps keep them out.)

The Center’s crop yield was five to six times higher in the milk crates, said Margaret Skinner, head of the Saffron Center. That’s better, on average, than the yields in Iran or Spain. Since quality dictates price, they also had chemical analyses done and found the quality of their crop on par with both countries. 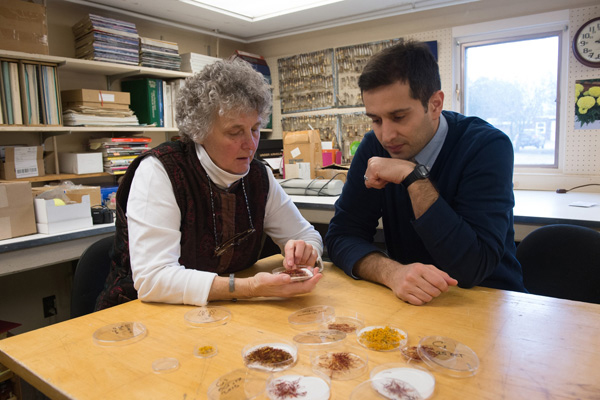 Skinner sees saffron as an appealing crop because the initial investment is low; saffron is relatively easy to grow and a perennial, and it’s scalable, although she encourages farmers to start small. The most laborious task is harvesting. “I think it has potential for a broad array of people,” said Skinner. “It’s not physically taxing and also not that complicated.”

Because the idea is seen as so novel, however, Skinner and Ghalehgolabbehbahani have faced difficulties getting funding for their project. Even so, the University hasn’t had to try hard to convince farmers to participate.

The first saffron-growing workshop that Skinner and team held in March 2017 was at capacity, with 100 attendees, and organizers had to turn 50-plus people away. They came from all over New England, and as far away as California and Louisiana.

“We couldn’t get them to stop talking,” said Skinner. “There was so much enthusiasm in the room it blew me away.”

In 2017, there were at least 30 new growers just in Vermont, and about 300 members on the research center’s listserv, where growers trade info and tips.

Although Full Circle Gardens’ typically grows ornamental plants, Salatino decided to give saffron a try because she was looking for ways to extend her growing season and keep her staff employed. She started with 300 corms in two outdoor raised beds and another 300 in milk crates inside her greenhouse.

At Red Thread Farmstead in Swanton, Vermont, owner Steve Leach took part in the experiment by planting 10,000 corms—manually—in containers for his inaugural saffron crop. They’re in a 21-by-96 foot backyard greenhouse, which he built himself. 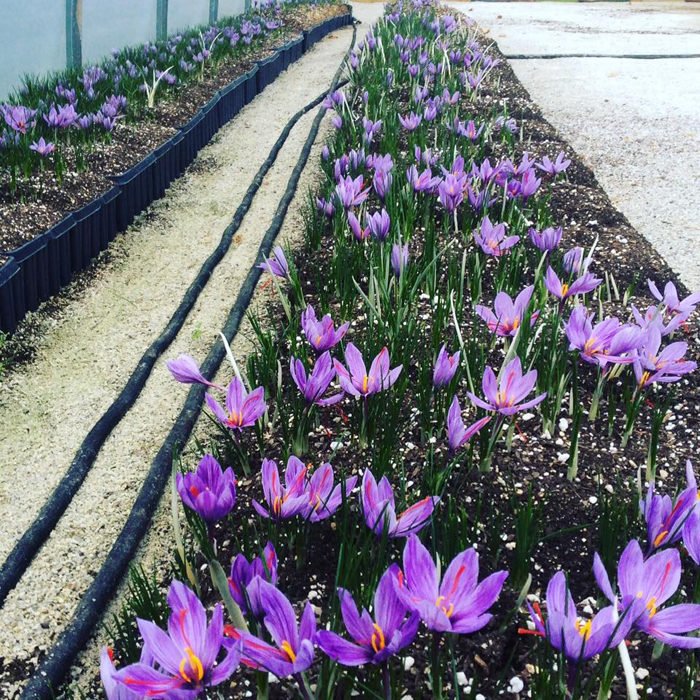 Leach, who works in the plastics industry, chose saffron as part of a second business. He’s also experimenting with growing microgreens in his basement, and sees the two niche crops as complementary.

“I’m focusing on food that is in the top nutritional grade,” he said.

Leach said he underestimated how much work prepping the soil and planting the corms would take—in all, about three and a half weeks. He also quickly realized he’d need to tweak his growing arrangement for the next crop. He planted this year’s corms too close together and in containers too shallow for the their root systems. Next year, he’ll be digging them up and giving them more room.

“I went a bit overboard with my first crocus order,” he said.

At last year’s Saffron Workshop, Ghalehgolabbehbahani detailed how each part of the plant–corms, threads, stamens, and petals—have a market value, and he estimated a possible $28,000 in net revenue per year from a 30-by-90-foot high tunnel. But it will take some work to get there.

Full Circle Farms’ Salatino is a bit disappointed with this year’s harvest—only 54 percent of the inside and less than 50 percent of the outside corms bloomed. Of Red Thread’s 10,000 corms, 3,000 to 4,000 bloomed, yielding about 22 grams of saffron—which has a potential resale value of only a few hundred dollars, depending on quality. Although Skinner and Ghalehgolabbehbahani are still awaiting samples and analyzing the results from other farmers’ samples, Salatino’s yield seems to be around average.

Even with all those difficulties, growing saffron might be the easier part of the project—creating a market for locally grown saffron could be a bit tougher.

It’s the classic catch-22 of marketing: There has to be enough product for a market, and enough of a market to justify growing the product and supporting local production.

Saffron’s reputation as exotic and expensive is something of a barrier for consumers, though there is small but steady demand for it.

Leach of Red Thread Farm is trying to make his own market with a product line of spices and teas, including a tea that blends saffron with high-grade matcha, and other inexpensive, entry-level products. “I’m pushing people to think out of the box and not just [see saffron] as a spice for rice,” he said.

Despite the low yield of her planting, Salatino of Full Circle Farms thinks there’s potential for a local market because Vermont already has a strong farm-to-table tradition. 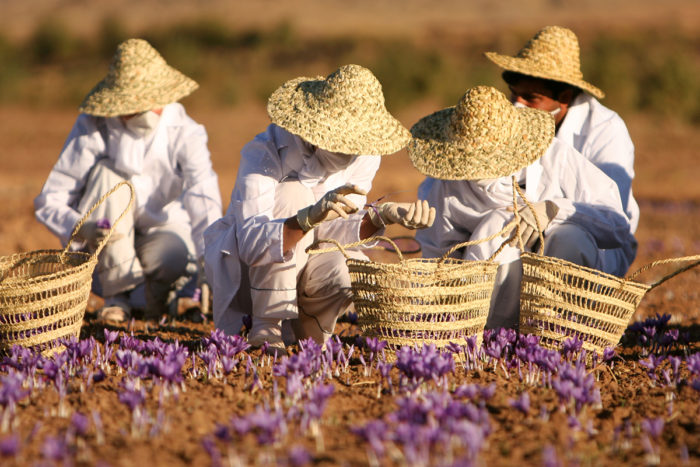 Chefs and consumers, “like to know that what they’re eating and planting is coming from down the road or up the state,” she said.

That may be a good approach because, as with many valuable products, there have been incidences of counterfeit, mislabeling, and tainted saffron and a locally grown product could offer a measure of reassurance.

Owing to differences in quality and costs of production, one kilogram of Italian saffron costs approximately $29,000, compared with $15,000 for Iranian saffron, making passing off lower-quality saffron for high quality a temptation.

“There’s a lot of monkey business going on,” said Hans Rotteveel, president of Roco Saffron, a wholesaler based in the Netherlands. “A lot of saffron in supermarkets is not really quality saffron or sometimes [it’s] even fake.”

At the University of Vermont’s lab, Ghalehgolabbehbahani shows the saffron samples from around the world that he and his colleagues have gathered. In Iran, he said, saffron threads are bought whole instead of powdered (which is also a good way to gauge quality), and then ground into a powder with a mortar and pestle. For cooking, the powder is steeped in hot water and then added to a recipe. The Mexican safflower the professor keeps on hand to demonstrate the difference between the two has a distinctly different smell.

U.S. producers have an opportunity to offer a premium, safe product and provide buyers with the reassurance that they’re getting the real deal. Iran will likely remain the biggest saffron producer for the global market, said Rotteveel. But that doesn’t mean there isn’t room for saffron from farmers like Salatino and Leach.

“Knowing the market in America is this big, American growers can ask a big premium, and maybe ask for Italian prices for locally grown saffron,” he said.