Second-Gen Farmers May Inherit Family Farms, But Do They Face Fewer Hurdles?

As the U.S. farmer population continues to age, farm succession remains a challenge—although some family farms are making it work. 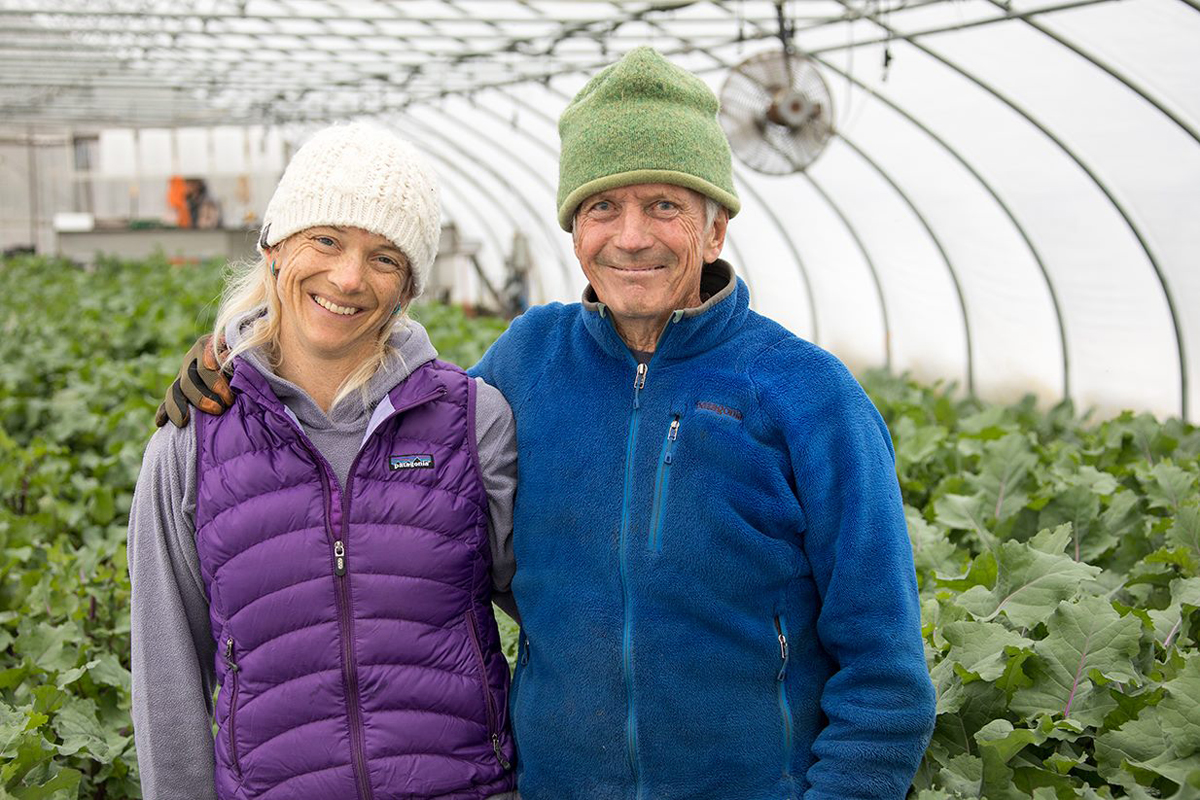 There is hardly a more well-known or well-respected name among organic farmers than Eliot Coleman (pictured above, at right). His 1989 book, The New Organic Grower, gave an entire generation of beginning sustainable farmers the tools and methods to make an honest living in agriculture where few resources existed before. And his Four Seasons Farm in Harborside, Maine has stood as a successful model of cold climate winter vegetable production. But his success was not enough to entice his daughter Clara Coleman (pictured above-left) to follow in his footsteps. At least not at first.

“I spent most of my life trying to get away from farming,” she admits.

Growing up, she witnessed her father “working constantly,” and feared becoming a farmer would keep her from being fully engaged with her own family. Moreover, she says that when she was young, “farming was not sexy.” There was a general stigma about being a farmer that didn’t make her want to learn because it was “not something that was valued.”

The world has began to appreciate organic farming more in the last two decades, and Coleman also began to see agriculture differently as she approached motherhood. As much as she feared that farming would take up all her time, she didn’t want her children to grow up without a strong connection to where their food came from. So after her second child was born in 2007, Coleman began farming where she lived in Colorado as an experiment. She found that she was able to balance work and family life.

“That was the turning point,” says Coleman, who realized then, “I needed to farm with my dad. I needed to actually build those connections between generations and have that opportunity before it’s too late.” So in 2016, she moved her family back to Four Season Farm to work alongside her father, and slowly take over the land.

On small farms around the country, second generation farmers like Clara Coleman are significant in that they become a bridge between the brutal first steps of a farm and its potential wonder years—the years when farm debt is relieved, the equipment paid for, and the systems and markets established. But as Clara’s story shows, second-generation farmers still have strong hesitations about becoming farmers themselves, even coming from successful farms.

“It’s a significant challenge,” says Jerry Cosgrove, director of the Farm Legacy Program at American Farmland Trust (AFT). “The assets themselves are valuable, but it can also be an interpersonal challenge; in many cases you’re not just transferring assets, but a business as well as a lifestyle—and when people live on the farm, it’s also a residence.” 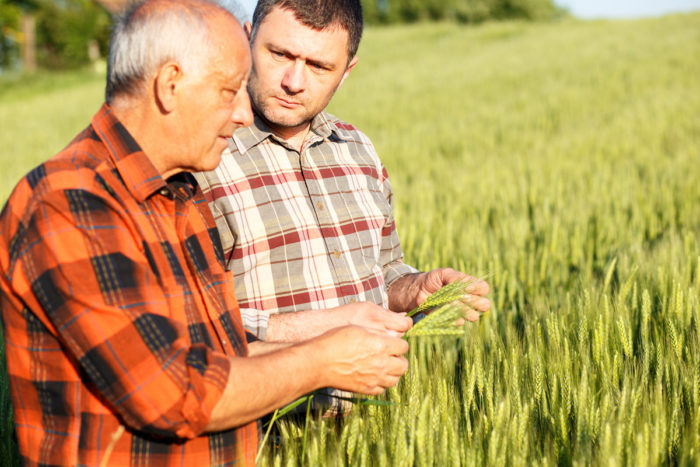 Though certainly complicated, many see small farms as key to food security, environmental stewardship, and thriving local economies. But if today’s small farms are going to be more than just a blip in the history of agriculture, first-generation farmers will need to pass their operations on to like-minded farmers—and their children are often most likely to uphold their legacy.

The average age of the organic farmer in the U.S. is around 53 years old—only five years younger than the national average for farmers overall. Conventional family farms are rapidly consolidating, with the average farm size nearly doubling since the 1980s.

To avoid a similar fate, small sustainable farms can heed lessons multi-generation farms. Farmer David “Mas” Matsumoto, a third-generation organic peach farmer in California’s Central Valley, has written and spoken extensively on the subject of farm succession, and published a book with his daughter and fellow farmer, Nikiko, about their farm-succession experience. There are dozens of stories like the Colemans’, which offer a glimpse into what it takes to inspire a second generation of farmers.

Back From the Land

As many as one million people participated in the back-to-the-land movement of the 1960s and 1970s, contributing at least in part to the only period in the last century where rural population growth outpaced urban growth. Eliot Coleman was among them, and he and many others set out to grow food on a human scale, in ways that worked in harmony with the environment. Farm numbers were coming off a steep decline between 1950 and 1970, but they leveled off during this movement. However, rural populations have continued their decline since then, suggesting many children of the back-to-the-landers left the farm when they had the opportunity.

Kate Daloz, author of We Are as Gods: Back to the Land in the 1970s on the Quest for a New America, says that some of the children of this movement did stay on farms, “though it’s true, not many.” Many—including Daloz herself, who grew up in a geodesic dome in Vermont—moved to the cities. Some left for a while and came back, but many more went on to college and got city jobs. These jobs, says Daloz, were often community- and environmentally based, even promotional of local agriculture in the case of food co-ops, though rarely in agriculture itself.

“When I started farming I’d run into people who grew up on farms and they would always say, ‘I liked the culture but I didn’t want to farm.’ So they became an extension agent or something like that,” says Eliot Coleman.

“Farming is an extremely difficult, uncertain way of life,” adds Daloz, “and children of farmers have always moved into other professions as soon as they had the opportunity. Despite all the ways that farming is a rewarding, noble way of life, it really isn’t for everyone.”

Eliot Coleman does believe, however, that since so many organic farmers come to farming out of idealism, the resulting enthusiasm can rub off on the children. But getting children to fall in love with farming may still be tricky. “Teachers who are passionately involved with the material they are presenting are always the best at it, the most inspiring,” he says. And when farmers are passionate about what they’re doing, he adds, it’s infectious and can help pave the way for a second generation.

The Perks of Being Second

There are clear benefits to taking over the family farm, especially when that farm is organic. Although stress and depression are common among farmers, as are injury and divorce (around 33 percent), signs suggest that the situation may be somewhat better for organic farmers. One study suggests that organic farmers identify feeling happy more often than conventional farmers. Plus, part of the challenge for those beginning organic farmers who came to farming before the internet age, was a lack of information.

“When you go back to the ‘60s,” says Eliot Coleman, “every ag expert you ran into, every professor—even the clerk at your local seed and feed—used to tell us we were nuts and it couldn’t be done this way and that it was foolish and unscientific.”

Now there is science that supports his approach and the information required to be a successful organic farmer is far more abundant and accessible. And in a world where farmland is less and less affordable, family land may be entirely paid off by the time the second generation takes over. Equipment may be paid for, the infrastructure established, and, in many organic-farm examples, the soil has been built up. 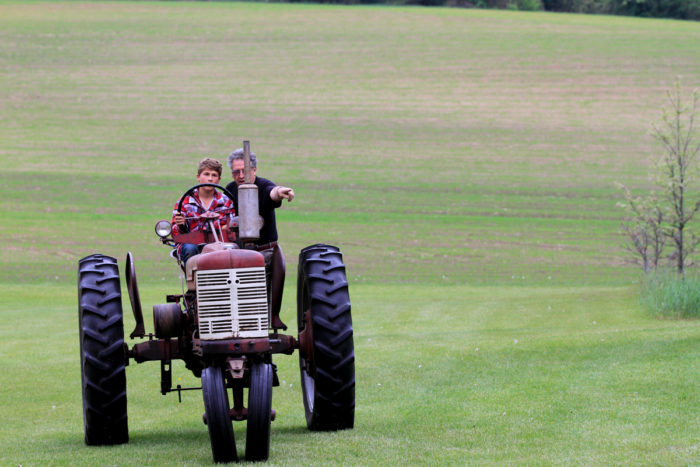 “I had tractors and discs and all the tools I needed,” says Michelle Bossert, a second-generation farmer in Alberta, Canada. “I didn’t really have to put in a big investment to start out.”

Though her father kept bison and cattle, Bossert did not grow up wanting to be a farmer. But after going through a breakup, she found herself back at the family farm and in need of some extra income. Looking around she saw much of what she needed to start a farm and jumped into growing vegetables with minimal investment of her own. Now, two seasons later, Bossert says she “can’t imagine not farming.”

An added benefit of passing a farm on to one’s children is the timing. Often, says AFT’s Cosgrove, “once the next generation is in place and has demonstrated a commitment to and aptitude for farming, the transfer [of the farm] will start to take place sooner rather than later—and that always works to the benefit of the transfer. If there’s no clear successor in place, the farm operator will wait too long to start thinking about it.”

Alex and Betsy Hitt of Peregrine Farm in Alamance County, North Carolina, never had children but sought out someone to pass the farm onto, in effect manufacturing a second generation to take over the business they established. “If you have worked your entire life and built something from scratch,” says Alex, “you have a vested interest that is almost uncommon to any other business.”

Many farmers, says Alex, use the sale of their land and assets as their retirement plan but, with tens of millions of acres of farmland expected to change hands over the next few years alone, a number of universities, government entities like the Farm Service Agency and groups like the National Young Farmers Coalition are working on “succession planning” for farmers with and without family members who want to pass their land on.

The Hitts researched how to successfully transition their farm. They set up an agreement with their employee, Jennie Rasmussen, that allowed for her to slowly transition from employee to owner. They started by giving her 10 percent ownership, and they’ve relinquished 2 percent of their business every year since.

But it’s not just business, stresses Alex, “It’s like getting married again.”

“This is a person that is taking over your life’s work,” he says, “it could be easier or harder with a family member but it’s all about communication, respect of space, and privacy.”

Hitt says he has heard about many farmers who have a hard time giving up control, something the renowned French business school INSEAD has dubbed “The Retirement Syndrome,” where CEOs struggle to relinquish duties to their successors.

Jason Weston, a second-generation farmer of a 7-acre vegetable farm in Bellingham, Washington called Joe’s Gardens, says he has seen this phenomenon often. He says many of his friends who are taking over their family’s farms are still being micromanaged. Instead, he says, “the parents have to stand back and let their children make decisions and let them fail.”

Clara Coleman sees it a little differently. She says succeeding the family farm shouldn’t be a takeover. “It has to be more of a partnership,” she adds.

This makes sense, because a lot of older farmers still want to work—and they want to tinker. Eliot says that Clara is handling the crew and the customers and he’s working on infrastructure. “I get to drive tractors. I intend to keep doing it, I enjoy it,” he laughs, “Clara’s gonna have to drag me out of here at some point when she thinks I’m useless.”