Can a Chinese Mega-Retailer Make a Killing off Montana Beef? | Civil Eats

Can a Chinese Mega-Retailer Make a Killing off Montana Beef?

JD.com wants to buy more of its beef from Montana, but many of the state’s residents are preparing for a fight over a proposed slaughterhouse. 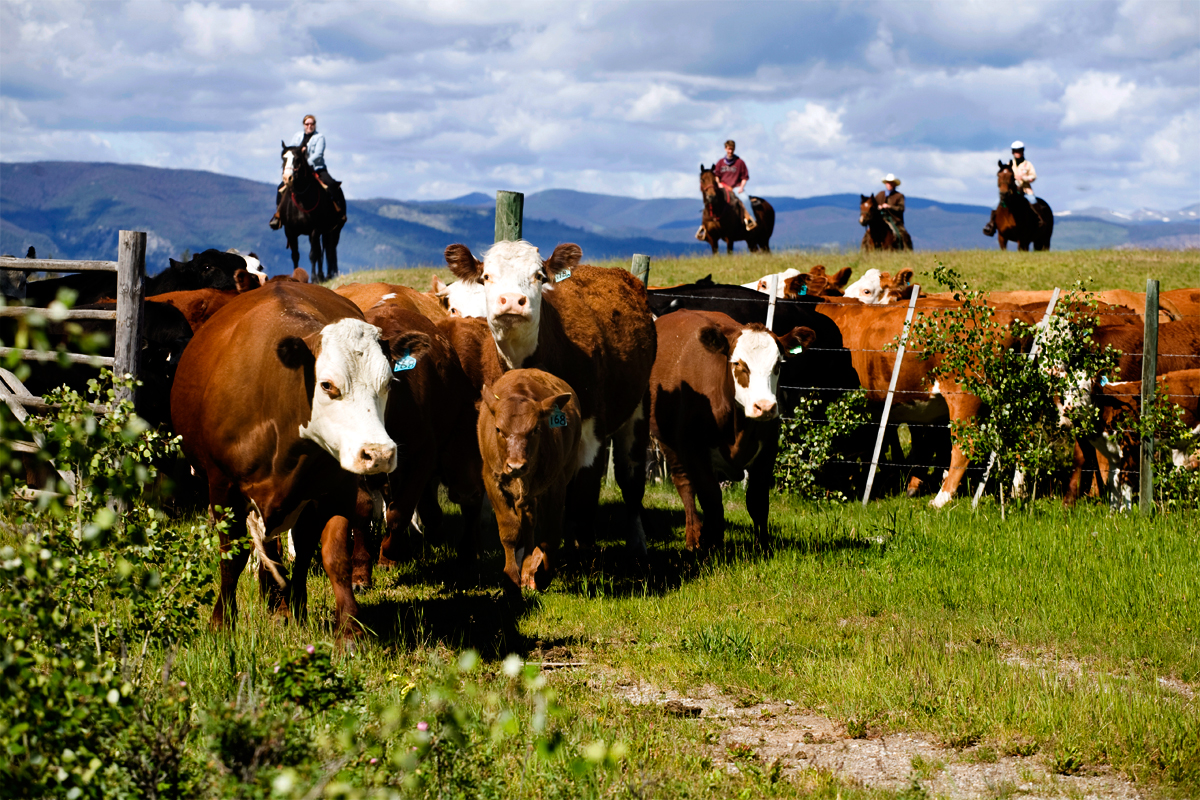 Montana is a cowboy state. Full of dramatic, pristine landscapes and seemingly endless open space, its residents point proudly to the fact that the ultra-rural state has more cows than people. Cattle have long been grazed in the high elevation sagebrush grasslands, which are known to provide the animals with more protein than other grasses. But these days, aside from a few high-profile grassfed beef producers, the vast majority of the state’s cattle get shipped to feedlots in the Midwest, where they get fattened on grains, slaughtered, and sold into the conventional market.

Now, big changes are afoot. In November, the owners of JD.com—a Chinese shopping website that sells everything from diapers to vacuum cleaners, as well as fresh food—signed an agreement to spend up to $100 million to build Montana’s largest meat processing facility. The commitment was part of a deal the mega-retailer made with the Montana Stockgrowers Association to buy $200 million worth of beef from the state. The move is part of a much larger push by Chinese companies to buy into the U.S. animal agriculture industry, as the middle class there grows increasingly interested in what they see as a safer, higher-quality source of food. Demand from China is also driving growth in the dairy, poultry, and pork sectors throughout the U.S.

Increasing Montana’s meat processing capacity would bring in hundreds of jobs and keep more of the money from cattle production in Montana, say advocates for the project.

But critics say it would also lead to more Montana cattle raised on feedlots and many of the problems that go along with large animal processing plants, such as increased truck traffic and decreased quality of life for nearby residents who have to contend with foul smells and pollution from animal waste. A group in Great Falls, Montana is already organizing against a proposal for a separate, large meat processing plant, following the example of communities such as Tonganoxie, Kansas, which rejected a large Tyson poultry plant last year.

China banned beef imports from the U.S. in 2003 following an outbreak of mad cow disease, but last spring the Trump administration and Chinese government began renegotiating that policy. Montana Senator Steve Daines wanted to make sure his state was first in line if those markets did reopen, and last April he brought a red cooler with four Montana steaks to a meeting with Chinese Premier Li Keqiang in Beijing. In June, the Chinese government lifted the ban, and when JD.com approached the Chinese General Chamber of Commerce about finding a source of U.S. beef, Montana was top of mind. 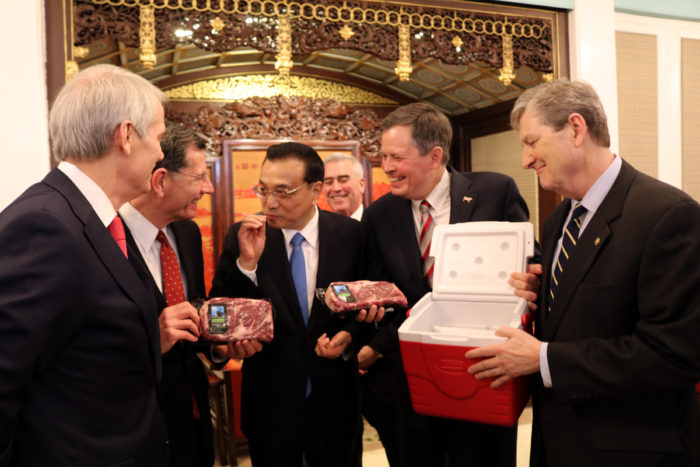 Can a Big Slaughterhouse Work in Montana?

Montana doesn’t produce enough meat right now to supply everything the Stockgrowers Association promised to JD.com, which is why the deal also includes plans to build a slaughterhouse to boost the industry. In January of 2016, for example, Nebraska had about 2.5 times as many cows as Montana, but according to data from the U.S. Department of Agriculture it processed and sold more than 400 times as much meat that year. Many of the cows slaughtered in Nebraska come from other states, including Montana.


Meat processing plants in Montana can’t compete with slaughterhouses in the Midwest because the state doesn’t have the same access to local corn or soybeans to fatten the cows before slaughter. However, Errol Rice, executive vice president of the Stockgrowers Association, says that part of the $100 million investment could go toward expanding feedlots near the new facility and using Montana barley or new varieties of corn that grow well in the state. That would likely require many Montana farmers to switch from wheat production to those feed crops. Along with cattle, wheat is one of the most important agricultural products in the state, and getting farmers to switch might not be so easy.

But even if Montana can produce its own feed crops, it will probably still be more expensive to finish cows there, and Rice said beef from Montana would likely fetch a higher price due in part to the state’s association with traditional ranching and its image as a cowboy state.

“We’ve made it very clear to JD. They could have gone to Nebraska and probably gotten a cheaper deal,” he said. “But we’re confident that we can deliver a far more premium product than what some of their customers are getting.”

The agreement signed in November includes almost no details about what the facility would look like, but it says construction could begin as early as this spring. This month, the Stockgrowers Association hopes to start discussions about what the investment will look like.

The group doesn’t have an exact blueprint for the slaughterhouse yet, and the agreement signed in November isn’t legally binding. But Rice said the starting point for those discussions will be based on a feasibility study conducted in 2014 by the nonprofit One Montana, which seeks to connect people in urban and rural parts of the state.

The facility described in the One Montana plan would process about 250 cows and bison per day, which isn’t as big as some of the operations in the Midwest, which can process as many as 5,000 animals a day, but would dwarf the ones currently in Montana. According to the study, this plant would process three times as many cows as all other slaughterhouses in the state combined. 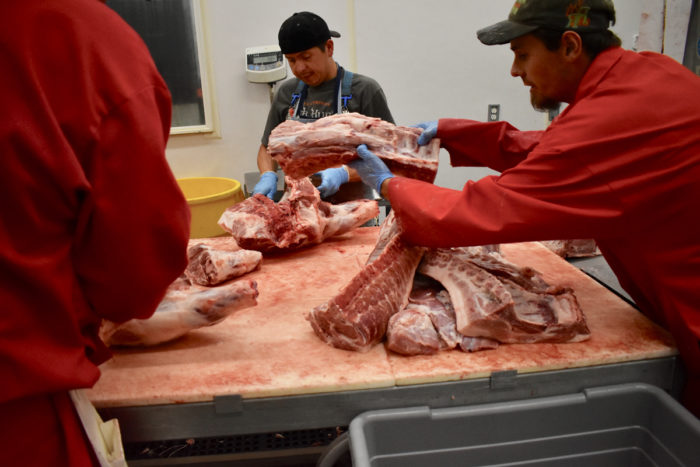 Stillwater Packing in Columbus is the state’s largest USDA-approved slaughterhouse. But Jayson Emmet, owner of Stillwater Packing and vice president of the Montana Meat Processors Association, said his company only processes around eight cows a day, as well as some pigs and sheep. He said a bigger slaughterhouse comes with a serious footprint, and he’s not sure Montanans will accept it.

“There’s nothing glorious about owning a slaughterhouse. I mean the smells that go along with it,” he said. “When you drive by a big plant in the Midwest … you can smell it from a long ways away.”

Still, he thinks that overall a large slaughterhouse would benefit the state. “Our unemployment levels should be next to nothing if a plant like that went in,” he said. “It would take hundreds of employees to be able to run it.”

Operating a meat processing facility requires skilled laborers, and right now Montana doesn’t have many people with those skills. The One Montana study estimates that it would require around 150 workers with an average salary of almost $35,000. The state has lots of unskilled workers that could be trained to work at the plant, but if the meat processing industry in other states is any indicator, it’s unlikely that the jobs will end up going to local residents.

Elsewhere, large meat processing plants are staffed mostly by migrant laborers and Eric Belasco, an agricultural economist at Montana State University and one of the authors of the slaughterhouse feasibility study, thinks this plant probably would, too. In other words, the overall impact on the state’s unemployment rate—which is slightly lower than the national average at 4 percent—would probably be fairly small.

However, in the feasibility study, Belasco estimated that every dollar from meat sold by a slaughterhouse of this size would generate $0.48 of extra economic activity in the community. Once it’s up and running, it could add more than $300 million each year to the local economy. For a small town, that’s a big number.

Residents Prepare for a Fight

According to the proposal, the plant would need to be located on the outskirts of a medium-sized town close to an interstate highway. Rice of the Stockgrowers Association says his organization is considering some towns near Billings and the area around Great Falls.

However, residents in Great Falls recently organized to oppose a separate, much larger, slaughterhouse proposed by the Canadian company Friesen Foods. The permit application for that slaughterhouse—which would process cows, pigs, and chickens in addition to producing cheese and distilled spirits—estimates it would use more water than most cities in Montana and produce more than 100,000 pounds of solid waste every day.

That’s why George Nikolakakos, a resident of Great Falls, decided to form the Great Falls Area Concerned Citizens, a community group opposed to the plant. He said the jobs and potential economic benefits are not worth the impacts on the environment and human health.

“They’re going to be drawing 3.5 million gallons of water a day out of the same aquifer that my water is in,” he said. “[My] primary concern is, ‘am I going to get sick from this thing, are my kids going to get sick?’”

In October and November, members of the group dug into county zoning documents and permit applications and found out the slaughterhouse would use open air lagoons just a few miles outside of the city to store its waste. They spread the word through a Facebook group and organized meetings to share their concerns.

They pressured Friesen Foods to withdraw their permit, and in November the planning division for Cascade County, where Great Falls is located, announced that the company planned to amend and resubmit its permit application.

Since then, opposition to Friesen slaughterhouse has only gained steam. Last month, hundreds of people attended a meeting organized by the group to express their concerns about the slaughterhouse, and their Facebook page has nearly 2,000 followers.

Tommy Bass, who works with Montana State University to disseminate scientific research to Montana ranchers and farmers, contributed to the section about waste treatment in the study. He said those kinds of ponds would have a lining to prevent waste from contaminating drinking water, but adds that the application the wastewater to nearby crops can also be a source of pollution because it is so high in nitrogen and phosphorous. If the slaughterhouse applies the waste from the digester efficiently, he said it could probably lower the risk of pollution.

The spraying of manure is also often seen as an environmental justice issue. In places like North Carolina, residents have waged ongoing lawsuits against large livestock operations due to the incessant smell of manure and nearly constant waste particles in the air that have made property near the facilities virtually uninhabitable.

Fear of these practices raises questions about how the Montana Stockgrowers Association and JD.com will convince a community that their slaughterhouse is worth the risks. Belasco says selling beef to China would likely raise the price of beef, meaning more tax revenues for the state. That could be a boon for the state of Montana, which last year had to call a special legislative session to fill a $227 million deficit in its budget.

Still, Nikolakakos of Great Falls Area Concerned Citizens isn’t convinced that these kinds of farms are the right direction for agriculture in Montana.

“Maybe this massive … industrial farming isn’t the way to go long term,” he said. “Does that mean meat is a little more expensive for a while? Probably. Can we stand to eat a little less meat? Perhaps.”

Matt Blois is a freelance reporter based in Missoula, Montana. Read more >