A Gift Economy Could Change the Food System | Civil Eats

A Gift Economy Could Change the Food System

Alternative economics within our communities could feed us all and fight climate change. 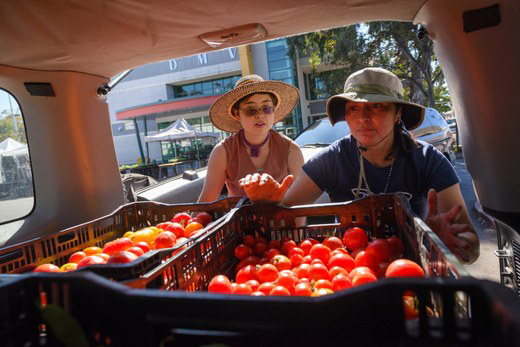 “If 100% of the people were farming, it would be ideal.”
—Masanobu Fukuoka

I grow a half-dozen fruit trees along my 40-foot stretch of sidewalk. The generous fig tree just finished, two young apple trees and a pomegranate are full of bounty, and the kumquat and persimmon are ripening. As much as I love the simple act of orcharding, I’m also sharing a radical vision for food and economy in my suburban Los Angeles community of Altadena. What if all my neighbors grew food in their yards, too? What if we shared the bounty with each other? What if you could eat a delicious, varied, and healthy meal from the abundance provided by your neighborhood trees?

Forty percent of the food produced in the U.S. is wasted. Much of this waste ends up in landfills, where it produces methane, a potent greenhouse gas. The food–climate nexus is a window into a deeply broken system; studying it—and experimenting with alternative economics within our communities—can reveal solutions that benefit everyone.

Consider the gift economy, brilliantly on display every Sunday in the Fruitvale neighborhood of Oakland, California. Pancho Ramos-Stierle is a driving force behind this free community farm stand, FrutaGift, which is painted in the colors of the season. 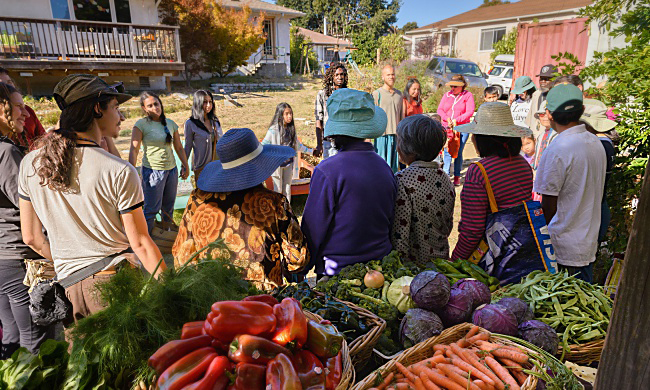 Oakland community members share a blessing before picking up produce from FrutaGift volunteers at Hidden Creek Cohousing in Fruitvale, California. When translators are present, the blessing is given in Spanish, English, Mandarin, Arabic, Mam, Japanese, and Catalan. YES! photo by Federica Armstrong

For over six years, Ramos-Stierle and his friends have gone to a local farmers market after closing time to help farmers clean and pack up. Farmers began offering their unsold organic fruits and vegetables for Ramos-Stierle to bring to the people in his neighborhood. Using this produce, he and his friends cook a sumptuous vegan meal that they bring the following week to share with the tired workers. A circle is created; everyone benefits. There is bounty and gratitude.

And yet, FrutaGift is just one part of a larger gift economy. Ramos-Stierle’s inspiration was the Free Farm Stand in the Mission District in San Francisco, started decades ago by a man named Tree. Says Ramos-Stierle, “I still remember the sense of awe and gratitude he evoked in me when I first met him. Like the giant redwoods and sequoias, Tree’s giant heart is filled with selfless service and love for all.”

Ramos-Stierle tries to carry this same gratitude for food and community to FrutaGift in Oakland. “Before we start distributing the food, we make a gratitude circle. We hold hands, and someone gives a blessing in their own tradition to honor all that made it possible to gather and be nourished in such a way.” Visitors to FrutaGift and the Free Farm Stand have gone on to do the same in their own communities.

Capitalism and its cash economy seem to lead inexorably to exploitation and wealth disparity, a few haves and mostly have-nots. But perhaps food can be the leading edge toward a sustainable, resilient economy of abundance.

Unlike many specialized goods and services, food is practical to barter—or, better yet, to gift. Here in Altadena, I’m part of a group that exchanges homegrown produce. We meet once a month in a local park, each bringing whatever surplus we happen to have. We create community and share abundance outside the cash economy. Imagine if instead of only one household every few blocks, all households were growing and trading food? The density of fresh, in-season produce would be so high (except perhaps for some portion of staple crops that could be grown on larger farms outside of town centers) that we’d meet each other’s needs, creating a local, waste-free, cash-free food system. 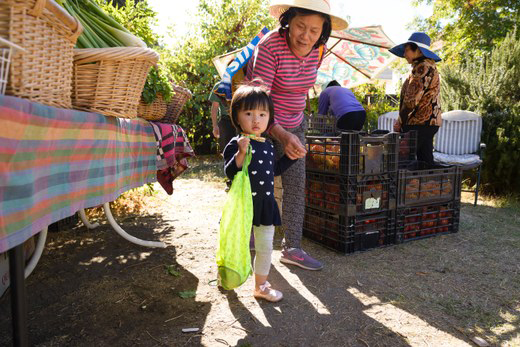 Locals pick up fruits and vegetables from the Free Farm Stand. Sometimes neighbors bring their own produce to share. YES! photo by Federica Armstrong.

Ramos-Stierle likes to point out that an entire complex civilization, the Inca, functioned without money or markets of any kind. Everyone participated in growing food. Our societies and economies are reflections of our food systems.

I mull these things over while walking my dog, the sun setting in the L.A. sky. As I walk, I take another bite of a perfect guava, a windfall from my neighbor’s wonderful, sidewalk-facing guava tree. A gift.

Peter Kalmus is a climate scientist at NASA’s Jet Propulsion Laboratory. He lives in suburban Los Angeles on one-tenth the fossil fuel of the average American. His book is “Being the Change: Live Well and Spark a Climate Revolution.” Read more >