Why You Should Listen to Racist Sandwich | Civil Eats

Why You Should Listen to Racist Sandwich

Soleil Ho, the co-host of the podcast, is done putting her head down in the kitchen. 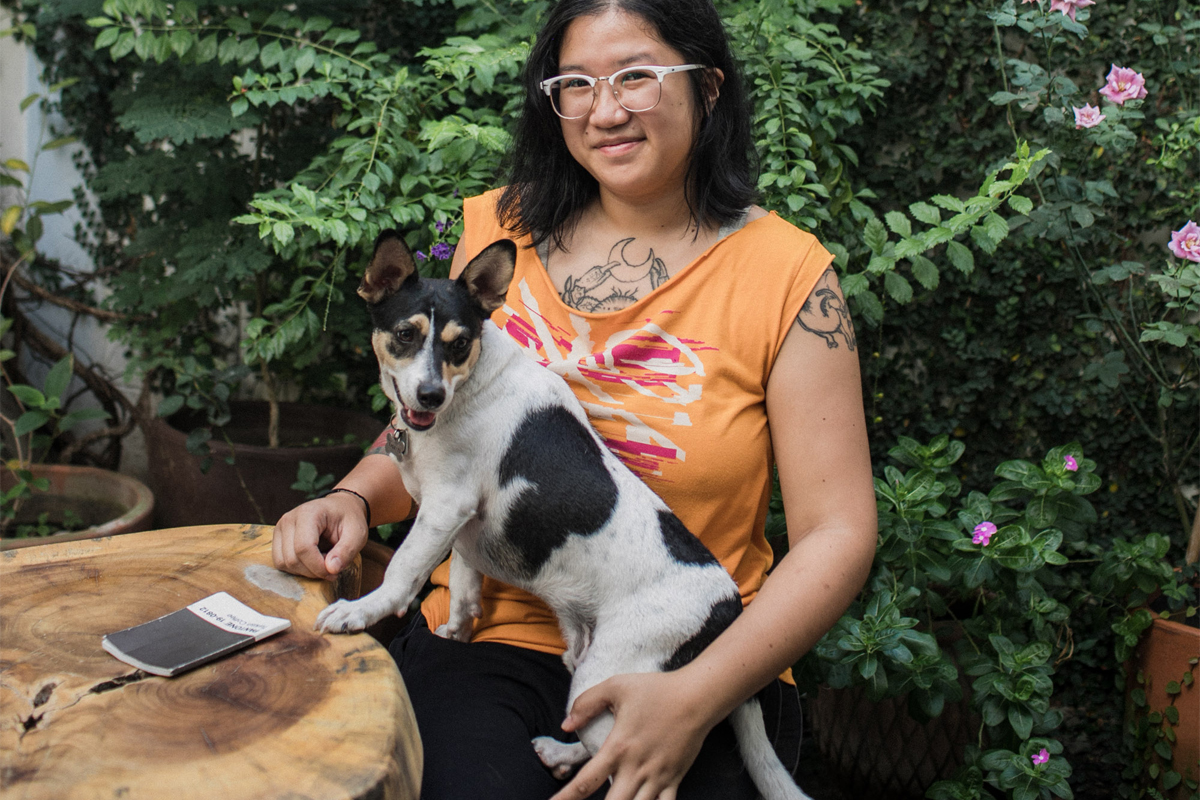 Over the course of a 40-episode first season, Soleil Ho and Zahir Janmohamed broke new ground in the country’s conversations around food with their podcast, Racist Sandwich. Their show is dedicated to conversations about race, class, and gender in the food system.

Ho and Janmohamed co-host the Portland, Oregon-based podcast they founded together, and with each episode they remind listeners that what we eat is packed with stories, history, and conflict. By interviewing chefs, restauranteurs, writers, and cultural critics, they locate and explore the points of tension and passion embedded in every meal, workplace, and food media outlet. They ask questions about how identity, work, and power intersect from the prep line to the farmers’ market. 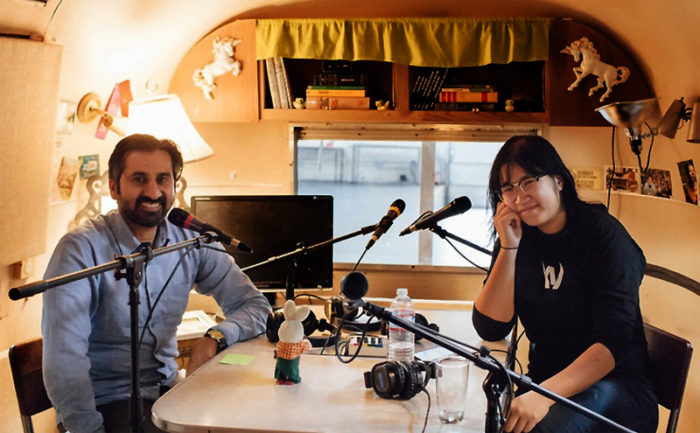 Racist Sandwich has explored topics such as how food photography reinforces reductive imaginations about race and food, the choice to call out harassment in restaurant kitchens, and the toxicity of “wellness culture.” Ho and Janmohamed make a point of amplifying the diverse voices working in the industry; as Ho put it, cis-gendered white men are “not really our thing.”

Last month, the team launched a Kickstarter to raise funds that will help them deliver a second season of Racist Sandwich. Civil Eats spoke to Ho about why she started the podcast, the whiteness of the Portland restaurant scene, and why Anthony Bourdain should stop referencing Apocalypse Now in Vietnam.

What pushed you to start a platform to address the intersection between race and food in particular? Are these issues particularly present in Portland?

There wasn’t a dedicated place for talking about race and how it interacts with food. I met Zahir, my co-host, at a party; we started talking about food journalism, the media, and the scene in Portland, which people say is a foodie town. But the major players in that scene are mainly restaurants owned by white people that serve food from nonwhite communities and culture. Restaurants like Pok Pok, Bollywood Theater, ¿Por Qué No?, all of these places contribute to the local scene and brought Portland into the global consciousness. But they are all sort of the same elevated takes on very regional food from not Europe and not the U.S.

How has your career working in restaurants shaped your perspective on race, gender, and class?

It was a crash course in totally different ways of living. I’ve been working in the back of house ever since college—it’s been nine years. One or two of the restaurants I worked at were woman-dominated or open to queer folks and trans folks. The fine dining ones considered to be more rigorous—those were dominated by white men. It was really interesting to see how different the culture was from place to place and how much that determines your comfort level as someone who is not white and not male. Observing and logging those as experiences contributes a lot to the way I think now about food and race and gender.

As someone who has been in a position to manage and create a culture, I think a lot about how being that uber-chef and toeing the line as far as abuse is very seductive. At one of the first kitchens I worked in, the chef and sous chef would always talk about the pastry chef. They would constantly talk about her breasts in front of me. They implied that she was in her position because of [her body] and not because of any particular work that she did. I didn’t know what to say because they were my bosses.

I have a lot of empathy for people who are marginalized who just put their heads down and keep working. You don’t know what to do, especially when you’re young and you need the job. It helped me realize the ways that discourse is upheld because of the power differential. We’re not all in a position to speak up. 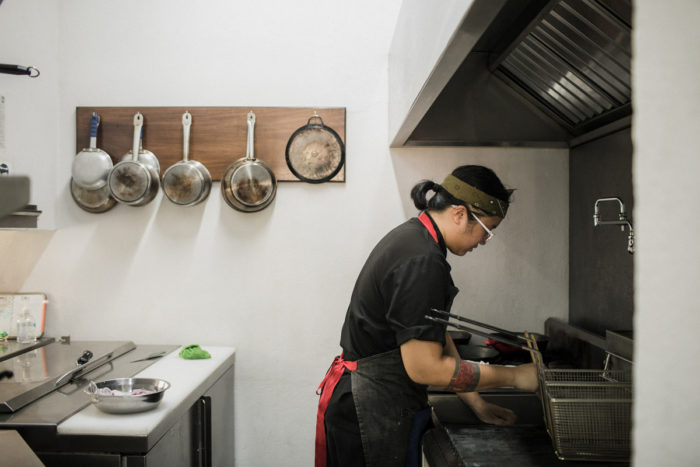 Later in my career, at another restaurant, I was working on a menu with some restaurant owners. They made a joke about how I should run a Chinese-style burrito place and they remarked that it would be called the Chimi-ching-chong. This was a work meeting—they laughed like it was funny. That was when I realized that, no matter how hard I worked, some people were not going to respect me and where I come from.

It woke me up to a lot of things. It made me more openly hostile, not in an aggressive way, but in the sense that I’m always looking for red flags and alarm bells. I put up with a lot in my career and I think I’m done. It taught me to be a better advocate for myself in the beginning, just so I don’t waste my time any more.

How have these lessons structured your work at Racist Sandwich?

It used to be a political decision to pay attention to people who are not men. But now it’s easier for me—[women and trans folks] are the ones who are consistently putting out work that I respect.

I would, though, love to talk to Anthony Bourdain. We usually don’t have white guys on the show, but I think it would interesting to engage with him. For a long time, I felt really ambiguous about the ways he painted Vietnam, which is where my family is from. I’d like to hash it out with him on the podcast.

He tries to make it complicated—I respect that. But I start to get really resentful when every time he goes to Vietnam he drops an Apocalypse Now reference. For a lot of Vietnamese people, that’s not a fun movie to watch. The way he brings expertise to food of various places, adds more fuel to the fire when people try to talk to [me], about [my] culture, as if they know something about it. They know his name and the name of the dishes, but they don’t know any actual people from these places and they wouldn’t bother to ask because they’ve already seen it on the show. That has always been something that frustrates me, they eat at a restaurant and they think that’s it. They’ve paid their ticket and now they know about where you came from. This has happened to me so many times; people will tell me about my family’s experience or about me and without ever having talked to me.

In the past few months, we’ve seen several leaders in the restaurant industry step down following accusations of sexual harassment and misconduct. Many have worked at large restaurant groups. Where does the industry go from here? Is it time to reconsider structures of ownership?

In a way, restaurant groups make sense, but I’m always worried about expansion. I don’t trust most people to expand and maintain. The chefs that I respect the most have one, maybe two restaurants. They don’t build empires. They reject the whole empire rhetoric. Certain folks will have restaurant groups. Others will have four or five food carts that are part of their franchise, like Sammy’s Halal in New York. One [model] is a vehicle for immigrants to get a foot in the door and have a chance. The other one is kind of a monster. It’s more of the same shit.

A restaurant group is just like a cartel. The majority of people who have the capital to start restaurants are white men with money. Any cultural change has to be approved by them, and that’s a scary thing. That attests to how slow [any change regarding sexual harassment and assault in the industry] is going to be, if at all.

A lot of them are like John Besh; they have a lot of money, they have restaurant groups. There are investors who want to participate and to reap the benefits. They want to get access to a lot of young, economically vulnerable people. It’s a very seductive lifestyle. For that to change, a lot has to change. We can keep calling it out, but the hydra has so many heads. 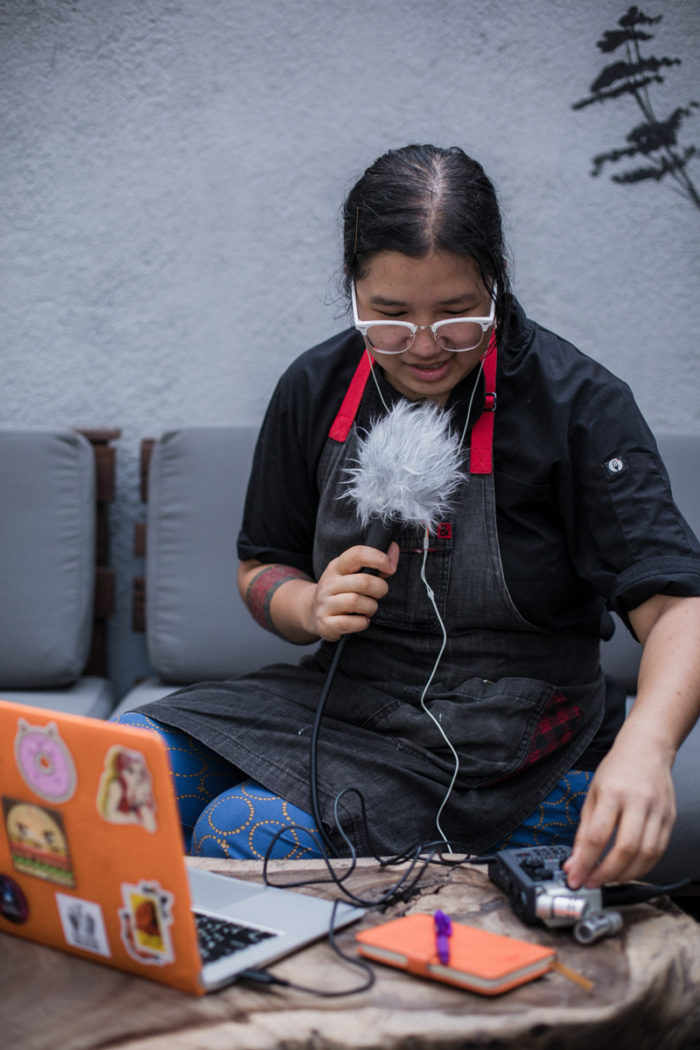 You went from working in restaurants to writing and talking about the culture and politics of food. How does food media interact with the restaurant world? How do you see media shaping the cultural conversation around food and restaurants?

Capitalism informs food media. There is this rhetoric about artistry and passion and geniuses in food media, which doesn’t really apply to the reality of labor. So many people uphold the genius and their labor isn’t valued—even though without them, the genius would be nothing. I think that falls into our tendency to value the product over the process in a lot of ways. We can’t see the whole picture, because doing so would cause us to question a lot of things that are foundational to the way things are run.

It doesn’t come down to the individual writer—it comes down to the people who are higher up on the food chain who make hiring decisions. You need to hire editors of color. You need to put more people of color in decision-making positions because they decide who to hire. They decide which freelance pitches to pick up, they approve the recipes, they edit language, they do all of those things that shape the culture. That is where the improvement will actually stick and matter—hiring editors who will call out a writer. They are the ones who let the language go through, they are the ones who set expectations and standards.