In New York City and around the country, a number of new programs use food as a way to support refugees. 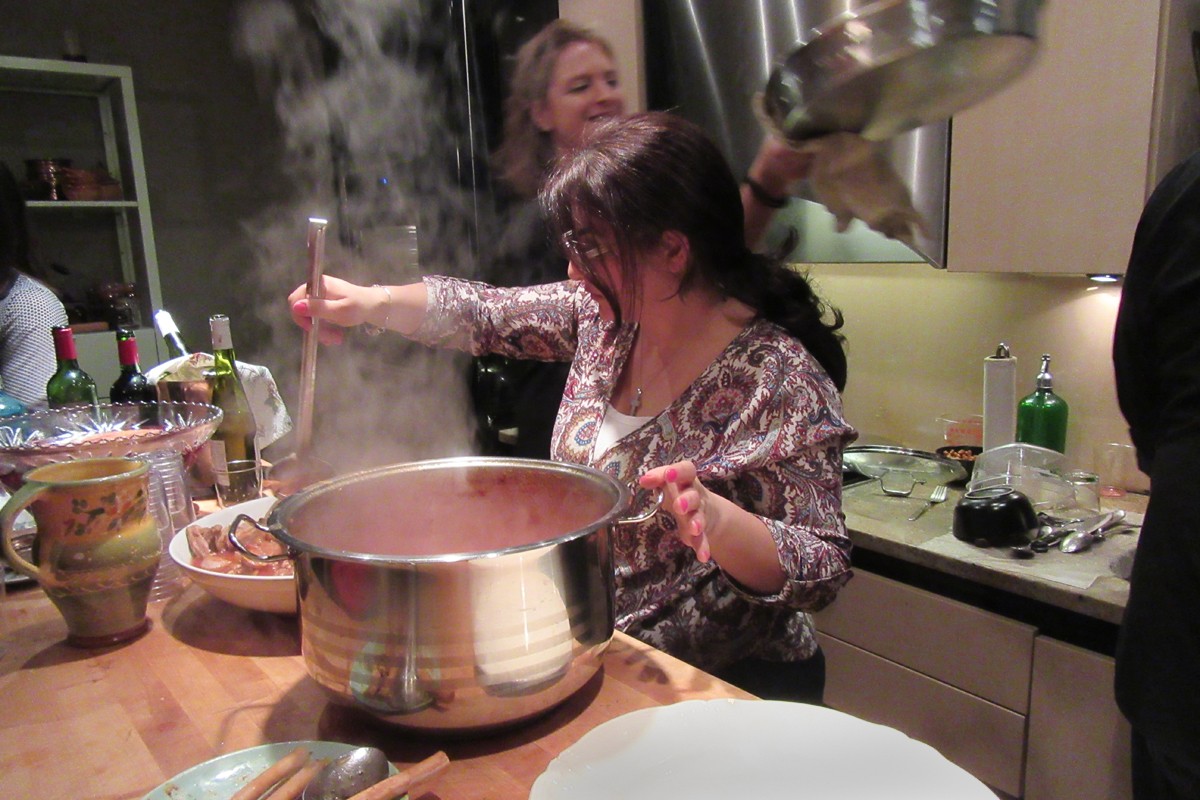 Rana Hashishow, a petite mother of four from Syria, stirred lamb, mixed salad and decorated a beef pie, while a group of around 20 guests gathered recently in a Brooklyn brownstone for a holiday meal.

As guests arrived, they were offered an assortment of appetizers such as yabraa (grape leaves stuffed with rice and lamb), mortadella (sausage), and cauliflower fattet.

“What I enjoy most about cooking is its ability to bring people together to celebrate,” said Hashishow, a Christian refugee. “I’m looking forward to people taking an interest in Syrian traditions and I hope they like the food.”

Some of the diners came for the food—like Lena, a Syrian-American woman seeking a meal that tasted like home. Others—like Jonah, who works with refugees and brought his adult son to the feast—sought to share a new dining experience. And still others came to learn how Christmas is celebrated in a part of the world that appears so often in the news, but can seem foreign to many Americans.

The event was organized by Tanabel, a new company that—like a growing number of similar projects in New York and around the country—employs refugee cooks and hosts dinner events that bring the cuisine and culture of the Middle East to New York City.

“My mission is to employ refugees at a living wage and give them meaningful and morale-boosting employment,” said Hannah Goldberg, a professional chef and Tanabel’s founder. Goldberg works with resettlement agencies and community groups to identify people who love to cook. Her team of five currently includes immigrants from Saudi Arabia, Iraq, and Syria.

A Response to the Election

Goldberg started Tanabel earlier this year, and describes it as an outgrowth of her community work with refugees from the Middle East.

“After the presidential election, I became an active member of a refugee task force in my neighborhood,” Goldberg said. In May, she began hosting dinner parties to raise money for Syrian causes. In July, she launched the business. 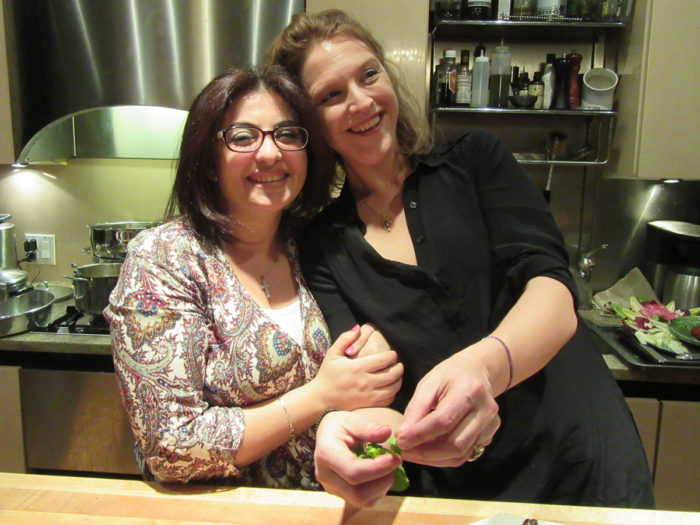 Tanabel hosts monthly dinners that she advertises to the public through the food-events platform Komeeda. Goldberg described the events as an opportunity for guests to try food and meet people from countries in conflict. She said the Syrian Christmas dinner was inspired by Hashishow’s background.

“Rana is an Orthodox Syriac, which is a small, little-known group with ancient traditions,” said Goldberg. Only 10 percent of the Syrian population is Christian. “I was excited to share her Christmas customs with our diners,” she said, adding that Christmas is the perfect time to personalize and humanize the refugee crisis by emphasizing shared traditions.

Offering Refugees a New Life in a New Home

Tanabel is part of a growing number of companies in New York and around the country that support refugees by tapping into the universal experience of preparing, cooking, and eating food. These businesses put the power of food to use by creating employment opportunities for refugees and building bridges between disparate populations.

Adwa Alsubaie, a refugee from Saudi Arabia currently living in New York, said her life was changed when she moved to the U.S. and learned about Emma’s Torch, a pop-up restaurant and culinary training program for displaced immigrants. 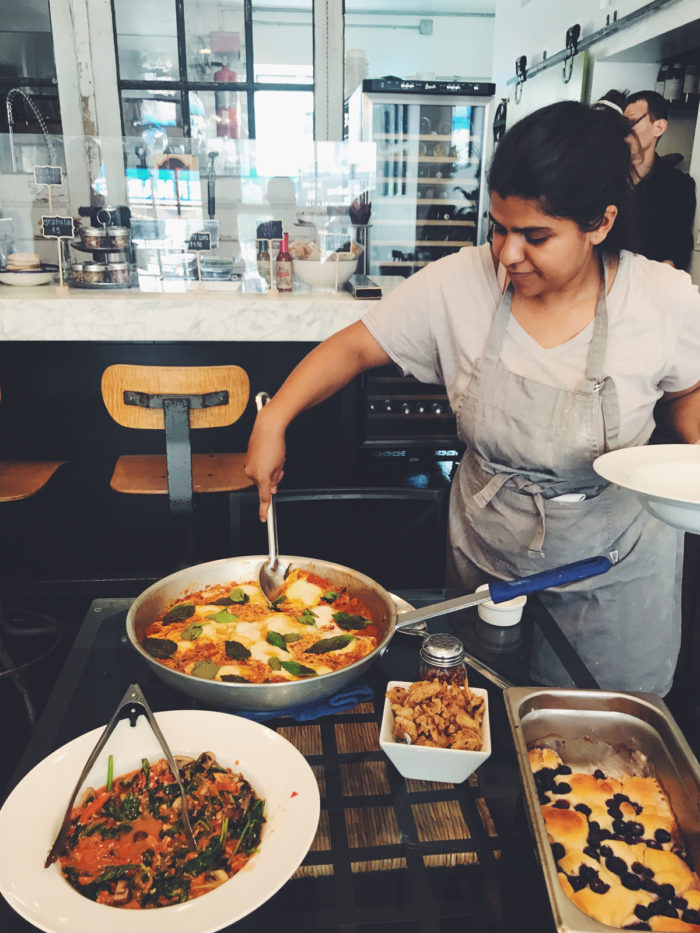 Before joining the program, Alsubaie was not working at all. But since she became one of the first graduates of the program earlier this year, her life has changed dramatically. “I got a job. I met new friends. My English improved and I have money now,” she said.

Emma’s Torch also brought Alsubaie closer to achieving a lifelong dream. “I love cooking. When I was in my country I was always watching cooking videos and I wanted to be a chef,” she explained. “In Saudi Arabia, it was impossible for a woman to be a chef in a restaurant. So when I came here—because I can do anything I want—I applied for Emma’s Torch and now I am working in a restaurant.”

Alsubaie has been in the U.S. for almost two years and is celebrating her first Christmas this year, spending it with friends and cooking a traditional Middle Eastern dish. As she reflects on the holiday season, she says she is most thankful for programs like Emma’s Torch that provide opportunities for refugees like her to start a new life.

“Our goal is job placement,” explained Kerry Brodie, the founder of Emma’s Torch. “We want students to be self-sufficient and see a way for upward mobility in the food industry. We teach them the skills that will get them a job immediately.”

Two years ago, Brodie was working with the Human Rights Campaign in Washington, D.C. and volunteering at a homeless shelter when she learned that restaurants were struggling to find trained staff and refugees were struggling to find jobs. She then had the self-described “crazy idea” to join her work, her volunteering, and her personal passion for cooking and food-related causes. Brodie relocated to New York and launched Emma’s Torch earlier this year. 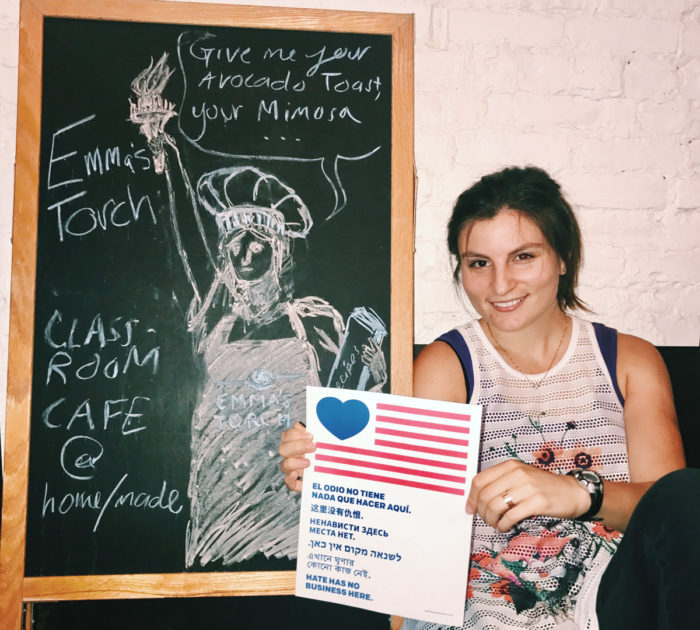 In total, eight immigrants from eight different countries have graduated from the training program this year, and Brodie says they’ve all found jobs at restaurants throughout New York City. Based on the program’s success this year, Brodie is working to expand it to train more immigrants next year.

Back in the Brooklyn brownstone where the Syrian Christmas dinner was coming to an end, one of the diners revealed that she was celebrating her 71st birthday. As the group sang “Happy Birthday,” the birthday gal’s companion, Lilly Dulberg, marveled how a group of strangers had come together over food in support of a good cause, and three hours later were leaving as friends.

“There are two things that everyone around the world can come together and relate to,” Dulberg said. “Eating food and getting older.”