Is Seaweed the Next Big Thing in Sustainable Food? | Civil Eats

Is Seaweed the Next Big Thing in Sustainable Food?

Seaweed farming is taking off in Maine and nationwide, which could mean good news for the economy and the environment. 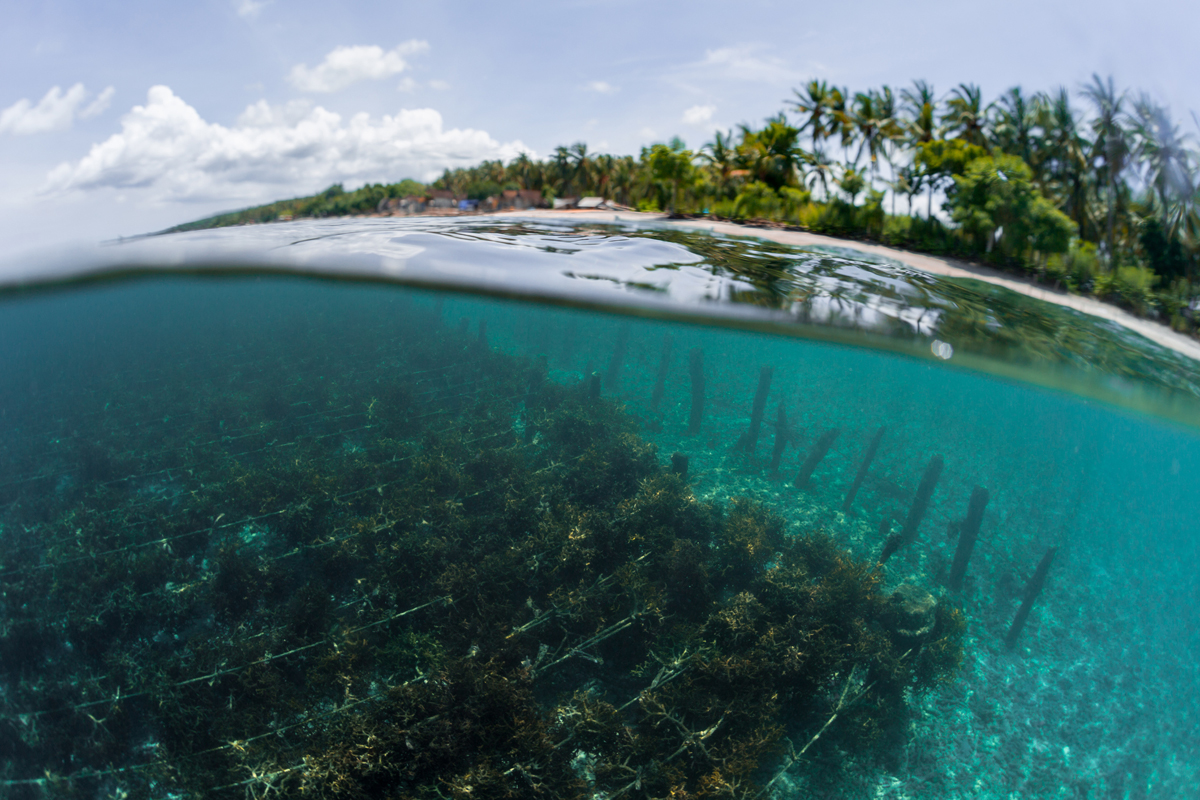 As Tollef Olsen throws a white buoy labeled “SEAFARM” into Portland, Maine’s Casco Bay on a cold, clear November day, he reminisces about talking to the Maine Sea Coast Vegetables founder Shep Erhart back in the early 1980s about the environmental benefits of farming seaweed.

Olsen recites: “No land, no fresh water, no fertilizer, no pesticides [used]…it also sequesters carbon.” But the big question was always, would people actually eat it? “Erhart would say, ‘There’s just not enough of a market.’ Now, he’s like, ‘Yup, it’s time. It’s working.’”

The buoy is one visible sign of that shift. It marks the coordinates of a corner of a new four-acre plot of ocean that Olsen will soon seed with sugar kelp, as part of his rapidly expanding farming operations that supply Ocean’s Balance, an edible seaweed company he co-founded with Mitchell Lench and Lisa Scali. 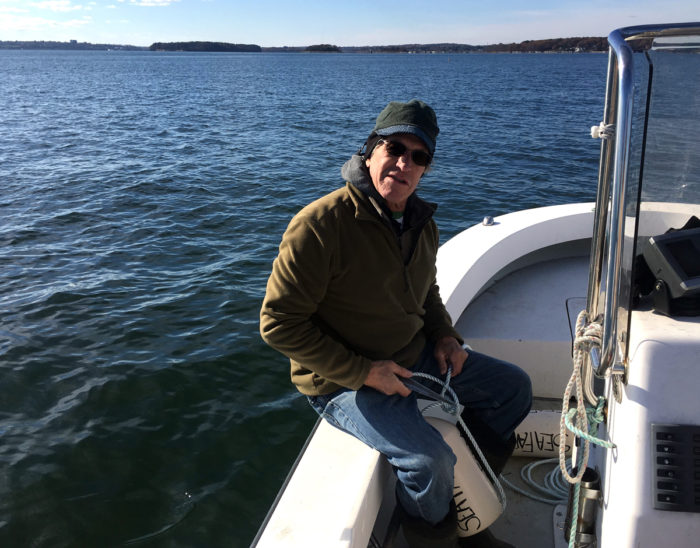 Ocean’s Balance, which started selling a kelp puree in January 2017, was recently picked up by four new distributors, and the number of stores carrying the product has increased 40 percent in six months. And that expansion is happening alongside other seaweed producers and sellers in the state. The U.S. Department of Agriculture (USDA) has awarded numerous grants to Maine seaweed producers like VitaminSea and Maine Fresh Sea Farms over the past several years.

In October, the U.S. Department of Energy gave the University of New England (UNE) a $1.3 million grant to support its seaweed farming research. Maine’s Island Institute is also training an increasing number of entrepreneurs in seaweed aquaculture every year.

The growth has been partially driven by consumer demand. While seaweed has long been farmed and eaten as a dietary staple in Asia, it might finally be catching on in the U.S, particularly among health-conscious consumers, with seaweed being mentioned as a top health-food trends this year by  Today.com, MarketWatch, and Whole Foods.

Proponents say rather than importing nori sheets from around the world, American food producers should be meeting demand at home in order to reap and further the benefits Olsen enumerated, especially at a time when wild kelp is disappearing due to rising temperatures. Planting more seaweed is one potential way to help reverse that trend, while providing a nutrient-dense, low-footprint food for a growing global population,

While there are now seaweed farms in in Mexico, California, Alaska, and Connecticut, Maine in particular is stepping up to position itself as the sea vegetable state.

The Economics and Sustainability of Seaweed Farming

There are many varieties of seaweeds, and methods of farming differ, but sugar kelp production works well in Maine. Kelp farming generally involves gathering source tissue from wild kelp and then using the spores from that tissue in a lab to grow kelp seedlings or “sporophytes” on strings that are then attached to ropes strung out just below the ocean’s surface. Leaf-like blades then grow downward while clinging to the rope from what is called a holdfast, hanging below the surface of the water in rows.

Thanks to its curvy coastal and island-heavy geography, Maine has 3,000 miles of coastline, a large percentage of which is protected from the open ocean. In other words, there’s plenty of space for kelp to flourish without disrupting homeowners’ views, without the threat of major ocean swells, and close enough for seaweed farmers to check their lines easily every week. 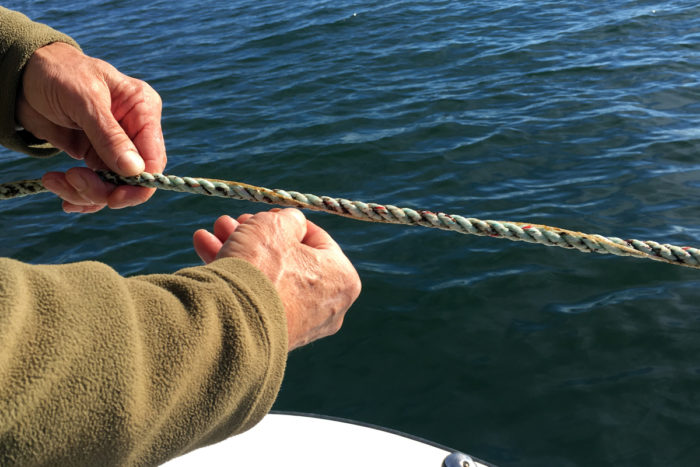 Most of the people already working that coastline are lobstermen, and the lobster industry is booming. “Last year was a record year, but there are concerns that with any natural resource economy, you don’t want to be too dependent on one thing,” says James Crimp, a marine business specialist at the Island Institute. To address that, the Institute created an aquaculture business development program to encourage shellfish and seaweed farming, which has since put two seaweed farmers into business and is currently training five more.

The key is that the seaweed season in Maine stretches from around October to May, which is almost the exact inverse of lobster season, making it possible and profitable to do both.” Lobstermen have some downtime in the winter, so seaweed works out great.” Crimp explains. “It’s a good way to keep your crew employed. Fishermen can start these farms with very little capital and keep on fishing,” he says.

With this in mind, Ocean’s Balance has partnered with the local school system to bring seaweed aquaculture education into Maine elementary schools. “We’re also training … kids on island communities,” CEO Mitchell Lench says, “so when they get older, they’ll have the opportunity to stay on the island or in the coastal communities and not have to leave for jobs elsewhere.”

“Our entire working waterfront can prosper and be positively affected by this,” Olsen adds, and he doesn’t just mean economically.

Organizations like the World Bank have proposed seaweed farming as one of the best solutions for feeding a growing global population without destroying the planet, and Barry Costa-Pierce agrees. Costa-Pierce is the director of the Center for Excellence in the Marine Sciences at UNE, where researchers and students work on an experimental kelp farm and grow sea vegetable seed in a lab (which they provide to farmers free of charge in exchange for participating in research studies).

“If you look at all the projections, from the United Nations and the top agricultural experts … there is no way that there is going to be the kind of food production that they’re saying needs to happen without massive destruction,” he says, referring to the vast amounts of land needed to grow the commodity crops that feed animals, for example. “If we want to maintain some sort of semblance of terrestrial biodiversity, we have to learn to farm the ocean sustainability. A lot of the food we need can come from the area of the planet that we don’t occupy as much.”

Seaweed farming fits the bill. It requires no land, no freshwater, and zero external inputs like feed or fertilizer. It doesn’t produce methane emissions or nitrogen run-off and it has the potential to mitigate ocean acidification by absorbing the carbon dioxide.

Acidification happens when seas absorb humans’ CO2 emissions, threatening marine life. Researchers from Bigelow Labs have shown kelp grown in Casco Bay has absorbed enough CO2 to decrease acidification in the immediately surrounding water. The changes were significant enough that researchers say it could protect shellfish like oysters and mussels, which are also threatened by acidification.

“I feel like seaweed is in many ways the most virtuous material on earth,” says Blue Evolution founder Beau Perry. Perry created Blue Evolution in 2013 to begin farming green seaweed, or sea lettuce, in outdoor ocean-fed tanks in Mexico. While his method does require a small amount of energy, he says the company is in the process of moving to solar power, to make the operation carbon negative. He also recently expanded to kelp farming in Alaska, where the offshore model is similar to the farms in Maine.

Working Seaweed into the American Diet

Fans of sea vegetables look to them for the perceived health benefits—they’re high in minerals, vitamins, and antioxidants—as well as the unique flavors. And chefs around the country have started to embrace the umami flavor on their menus (especially in Portland, Maine, at local food-forward restaurants like Vinland).

Still, aside from the occasional sushi dinner, the vast majority of Americans aren’t used to eating seaweed with any frequency.

“We realized early on that we really needed to create a retail product to tell the story and show the value to the customer,” Perry says. Researchers at the Island Institute had the same idea. While workers at the institute were training more farmers to go into seaweed aquaculture, they were doing so with caution since they there weren’t enough consistent buyers.

In October, the Institute published a report aimed at bridging that gap. It set out to identify 10 products that could be made with seaweed to appeal to American tastes. Researchers developed recipes like sea vegetable lasagna and pork and beans with sugar kelp and then did consumer testing. All 10 products ended up getting high marks from eaters, Crimp says.

“It solidified our confidence that there may be quite a large market for seaweed,” he says. “Now, we’re selectively giving out the results to businesses in Maine to learn from them or start producing one of these specific products.”

Ocean’s Balance created its puree after careful deliberation about the kind of food that would work for American eaters, landing on an ultra convenient, shelf-stable food that could be integrated into a variety of meals. “You don’t need to chop, blend, or dehydrate,” says Scali, who also develops recipes for the company. “It’s really easy to add to whatever you’re going to put it in.”

After dropping three more buoys to delineate all four corners of the new farm, Scali and Olsen start talking effusively about everything they’ve cooked with their kelp. Olsen shows off photos of a kelp berry crumble, kelp sloppy joes, and finally, a simple soup he made just a few days earlier (the last of which is the only dish that features visible seaweed).

“I made a chicken stock, but then I kelp-ized it,” he says. “We want to kelp-ize everything.”